After spending our first day in beautiful Bhedaghat, we left for Bandhavgarh in our cab the next morning at around 9:30 am. The road took us through farmlands, villages and jungle, giving us the best sight of country side. In almost 5 hours, we reached our hotel; Tiger Lagoon. Welcomed by a warm staff, moist towels and litchi juice, we felt at home and got to our rooms. The resort is situated near a lagoon, which ensures cool breeze and a good sight for bird watching. Our room was beautiful with huge windows overlooking the lagoon; where storks and herons frequented to catch fish. The first thing I had on my mind was a dip in the pool, so Navs ( my husband) & I headed for the pool, while Vaishali decided to take rest and enjoy the room.

We had a stay of 3N/4Days and the hotel booked for all our safaris. However, we learnt later that we could book our safaris online, which would have given us the option of booking zones of our choice (as per availability). We got all three safaris for Magdhi Zone, as Tala was full. Initially, we were a little skeptical, but the hotel manager assured that we will surely spot a tiger.

A Stork in the lagoon outside our hut

There are three main zones in Bandhavgarh.

Both morning and evening Safaris are good; and you can spot the tiger in either of them.

You can also book an elephant ride, which lasts for an hour and takes through paths not traversed by the jeeps. Though, there is no guarantee to see the tiger, if lucky you can see it from very close distance as compared to the jeep. We did not have any safaris on the day we arrived. Vaishali and I enjoyed the resort and spotted a few birds on the lagoon, while Navs went for an 8 km nature-cum-village walk organized by the resort. He saw the village life, various birds and carcass of a spotted-dear killed by the tiger. We enjoyed his stories with snacks and tea in the open area of resort, and spent the evening locating stars, planets and TIGER TRAILS.

It was 10:00am and our first Jeep Safari was about to end. From 06:00 am till now, we had seen a variety of birds (Night Jar, Serpent eagle, dancing peacocks, Eurasian Thicknee, Jungle Fowl, common Kingfisher, and Indian Roller) and spotted dear, jungle cat and wild boar. The forest blossomed with ever green Sal Trees and echoed with sounds of birds, animals and crushing dry leaves. Its vast meadows produced brilliant sight of Cheetals around a lake with the Bandhavgarh hills at the backdrop. 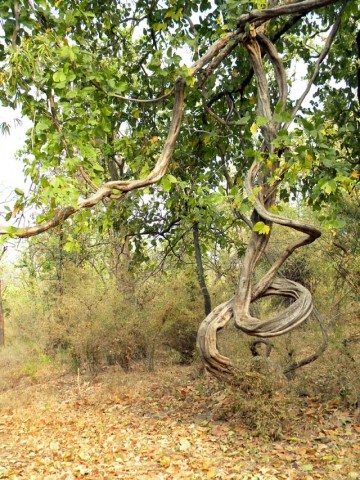 In no hurry to go up

The best thing about a jungle Safari is that you never know when a tiger could cross your path, and this hope keeps you excited and energetic. But our vigilance hadn’t paid so far.

Our driver Nathulal and Naturalist Bhuri Singh left no stones unturned to track the tiger; locating pugmarks, inquiring drivers, persuading forest trackers (who perfectly know tiger location) and even instructing us not to waste time watching trivial birds when we could loose track of the big cat. Suddenly, Nathulal seemed to know where it was and rushed the jeep to the park entrance. Around 15 jeeps were standing there and we knew the tiger was somewhere near. There he was; crouched in the elephant grass. I stuck the binos to my eyes, while Vaishali, started off with incessant clicks, wanting to capture the tiger in all its moves and moods. The only person who was calm and spotted the tiger first was Navs, he just wanted to see the lord of the Jungle with naked eyes, guess his specs were enough for him. 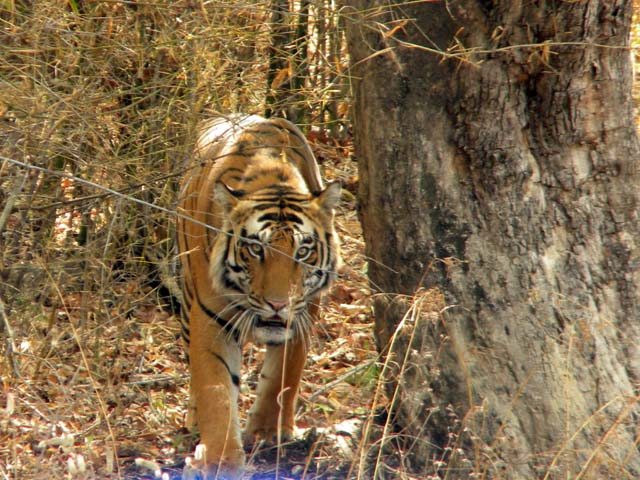 Approaching … King of the Jungle

The king now stood up and started walking; we also moved swiftly with him and came out of the park gate. Standing on our right side, he eyed at something; two spotted dears grazing right in front of him. We were thrilled, anticipating a kill. But, just as he took a leap, he got distracted by a crowd of 120 tourists and spared the lives of the feeble herbivores. He started crossing the road and was just five meters away from us. We were looking at a 4 year old, majestic male Royal Bengal Tiger that almost covered the road with his 6.5 feet long body. Neither perturbed nor annoyed, he looked at us with calm eyes, inquiring who we were and what were we doing in his territory. The beautiful stripes on his body shimmered with his cat walk and his composure told us that we were looking the king of the jungle.

The wild cat disappeared into the other part of jungle and left us wanting to see more of it. That day everything acquired more beauty, only because we saw one of the most beautiful creatures in its raw yet magnificent form. 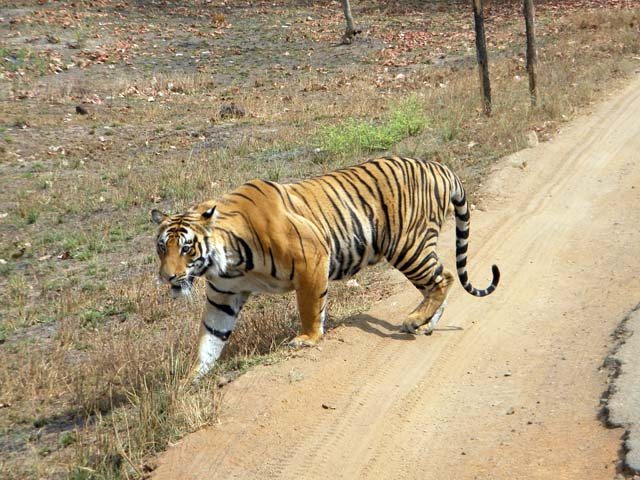 Our second safari was in evening, and thanks to the Rain gods who not just provided a comfortable weather, but washed off the dust and revealed a clear, bright jungle. That evening, every peacock danced and every animal and bird rejoiced, because there was no sign of a tiger.

On our last safari, we saw some rare animals such as, a Jackal, antelopes, Neelgai, a pair of fox and jungle cats. We also spoke to some forest guards who track tiger movement and ensure no poaching. It was amazingly to see them walk completely unarmed in the jungle. While talking to one of them, Navs asked, Don’t you feel scared of the tiger, what if it attacks you? And pat came the reply “We protect them and they protect us”. I was amazed that such a relationship existed between humans and an animal that is known only to kill. That day, we missed the tigers merely by 5 minutes but did not miss the message conveyed by the forest guard. 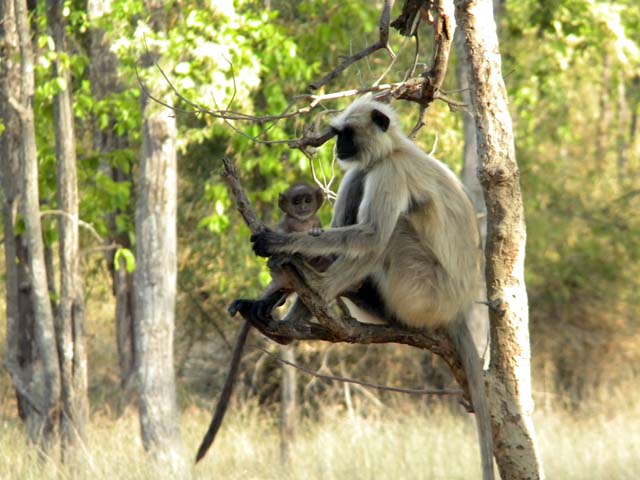 In the natural habitat

All four days, we did nothing but spotted different birds, animals, spoke with naturalists about the flora and fauna of Bandhavgarh and shared experiences with other tourists; mostly nature lovers, bird watchers and wildlife enthusiasts.

One thing we missed was the visit to Bandhavgarh Fort. I personally think that if you have 4 days, you should surely visit that fort which is inside the Tala Zone and you would need to spend around Rs. 4500-5000 (including Jeep cost and permission charges). Being inside the core forest, the Fort offers a good site to watch birds and some animals. The interesting fact is that the jeep only goes till a certain point; where a huge statue of lord Vishnu is placed. After that you have to trek for an hour to reach the fort, and on way to the fort, you can see old caves with carvings and walk in the greens of Sal trees. The fort, which is atop the Bandhavgarh hills, gives a panoramic view of the entire forest below. 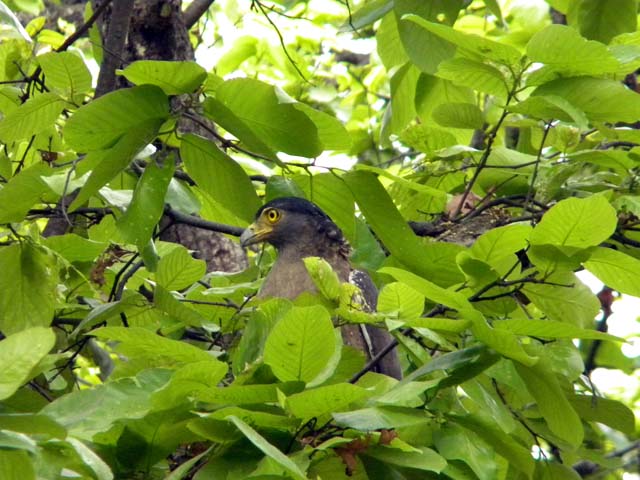 Tiger lagoon surely did make our stay in Bandhavgarh all the more worthwhile because of its amenities, exquisite architecture and warm staff, not to forget a very knowledgeable naturalist and super enthusiastic jeep driver. 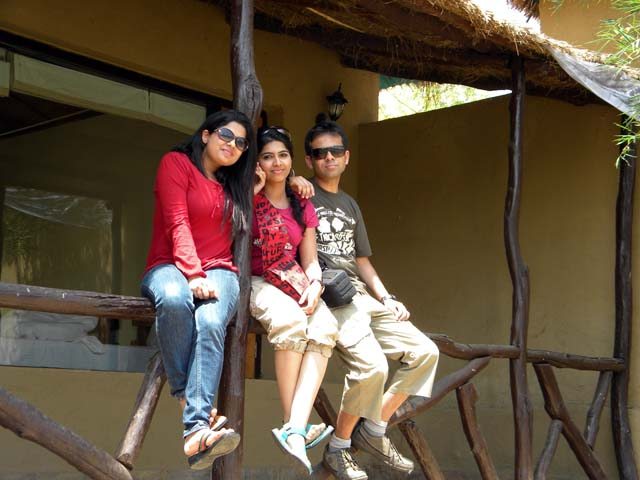 So, that was my story of Bandhavgarh and its tigers. If you are someone who loves nature and wildlife and can do without TV for a while, you would love the place and the resort too. No doubt it would be a little hot in April (42 degree Celsius), but that’s when the tigers come out to drink water!! So, go ahead and experience the thrill!!!

Bandhavgarh – Where Tigers Rule was last modified: May 20th, 2022 by Aparna