When we came out in the town I was feeling a bit hungry as had not eaten much till now. So I was in search of a nice Dhaba to binge on some solid food(proper khana) . On the way to highway in the market there were 3-4 Dhabas on one side. I  just stopped my car infront of one Sri Ram Bhojanalaya and asked my sawaaris for the food. Kids were not interested but my wife grabbed the offer and we ordered Besan ke Gatte ki Sabzi with simple chapattis. This sabzi is a delicacy in Rajasthan and till now I  had not eaten that . It was just delicious in this Dhaba though a bit more oily than we had expected. Fast food can,t be any alternative to proper food, I strongly feel but seldom implement. After enquiring again from the passerbys, found my way (it was a link road type with highway at some distance). I passed the Hindustan Zinc LTD. and a railway cossing before reaching the highway.

My plan was to reach Ajmer before darkness. On the way to Ajmer, came the signboard of Nasirabad town which refreshed my memories of student days…..(YEH AAKASHWANI KA NASIRABAD KENDRA HAI)…… and farmaishi gaanon ka programme afterwards. What I felt at that exact moment was killing of aakashvani stations like ALL INDIA RADIO KI URDU SERVICE and VIVIDH BHARTI in the hands of F.M .Just before entering the main town some lights were flickering on a hillock like landmass. My guessof that place was that of Pushkar. Perhaps I was right. I just told my family memebers that it is Pushkar. The sight was looking marvelous in the night. I had not any idea that Pushkar is at some height.

The hotel owner had warned me beforehand that Ajmer was a congested place and rightly so I also observed that. As usual we had no bookings and were in search of a decent budget hotel with parking facility. Mistakenly I asked a man about the way to Railwat Station as our experience has told us that such places could be found near Railway stations and Bus Stands. This time I was wrong and what I encountered was a very congested area full of crowd near Railway Station. My car was in chaos now with cycles and rickshaws all over it. It seemed to me very difficult to me to come out of it but anyhow came out of it nd just drove to a wide road about 1 km before the Railway Station. HOTEL NAGPAL was the sign board that attracted me. I  just parked my car and asked for the 3-bed room and parking facility. The hotel had both the facilities and I checked in. Tariff at that moment was Rs. 800/. Time was about 8.15 P.M and we were very confused whether to go for Dargah Ziyarat at that time or early morning. My wife suggested to go for  walk up to the Dargah of Khwaza Moinuddin Chishti  and try our luck at that time only. 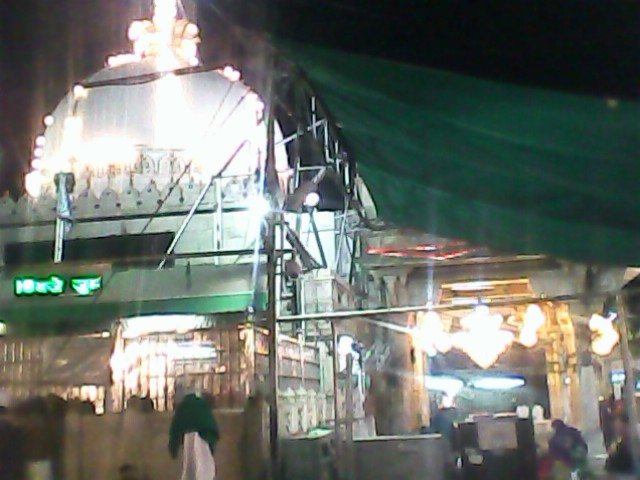 Our steps led us to a congested but beautiful Bazzar(Nala Bazaar) just shining under lights and pilgrims everywhere. Later I came to know that the Bazaar remains opened till 11 P.M in winters. Many reasonable priced souvenir shops are there in this Bazaar. The surprise element in my view was numerous Halwai shops highlighting the selling of Karachi Halwa and Sohan Halwa. I love this kind of atmosphere more than the mall culture, sme with Savita and Bhakti but the little one Pavani is more nti mall culture. Reached the entry point of the Dargah.

Oh God….. I had afterall enliven my dream to pay the salutation here. My wife had also wanted it desperately. I felt very relieved as soon as I entered the main area. An aura of spirituality engulfed me may be because I have always been inspired by SUFIANA environment and  SUFIANA KALAAMS as I feel that multi culturalism of India is well represented by such atmosphere. The ambience just engulfed us and overpowered us. 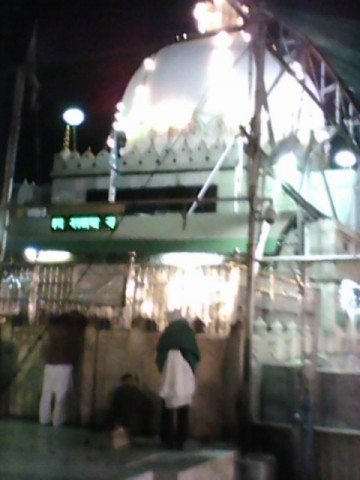 Another view of the revered Dargah.

A man from the shop from where we had bought chadar for Khwaja Ji accompanied us up yo main Dargah sensing that we were new to the place and coming for the first time. He helped us in the offering of Chadar. Came out of the place and stood silent for some time to imbibe the atmosphere in totality. Some persons were sitting outside for donations. We also offered some as it was meant for poor people. I had heard that two big utensils had been lying in the complex donated by Akbar . When we saw those we were speechless, so huge and almost half filled with the offerings from the pilgrims. A SUFIANA QAWWALI in honour of Khwaja Ji was in progress in the complex. Listened to it for some time and drowned ourselves in it. Even Pavani very happy here.After spending about 20 minutes in the complex we exited and on the road in front of us hich was coming from Railway Station side a flood of pilgrims had come. Not an inch of road was visible. 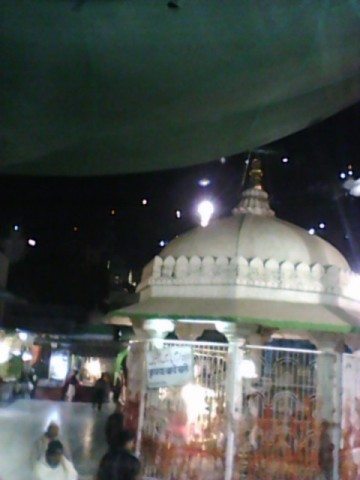 We were tired beforehand but now were were relaxed after the darshan at Dargah. Bhakti and Savita wanted to do some shopping and me and Pavani wanted to have some Golgappas in the Bazaar. The Bazaar wore a festive look though no festival was going on at that time. After Golgappas it was time for Tikki and Dahi Bhalla in one corner. We had decided to splurge again on fast food and snacks and avoid proper dinner(KAL AJMER MEIN HUM HON NA HON). So walking slowly we came to a very nice looking sweet shop. My preference here was a glass of Lassi(very thick and pure). Bhakti and my wife shared Gulab Jamuns, very delicious.  Reached the hotel and had a sound sleep. AGLE DIN PUSHKAR JO JAANA THA…

Folks , I do not have much photographs of Ajmer Sharif as camera was not allowed there , just three photographs from mobile.