Since my visit to Nainital along with my friends Sumit and Alok, the urge to explore Mukteshwar was itching me continuously after hearing its tales from local residents of Uttarakhand. After a long wait of 4 months, the urge became irresistible and I rang my cousin Kshitij in the morning of Friday to check if he is willing to accompany me for travel on next day to which he happily agreed. After the end the of his evening shift, he came directly to my place packed with few clothes for the journey ahead. We both started our journey from Vaishali, Ghaziabad and headed towards NH-24 at 6 am on bright pleasing October morning in my Maruti Alto. 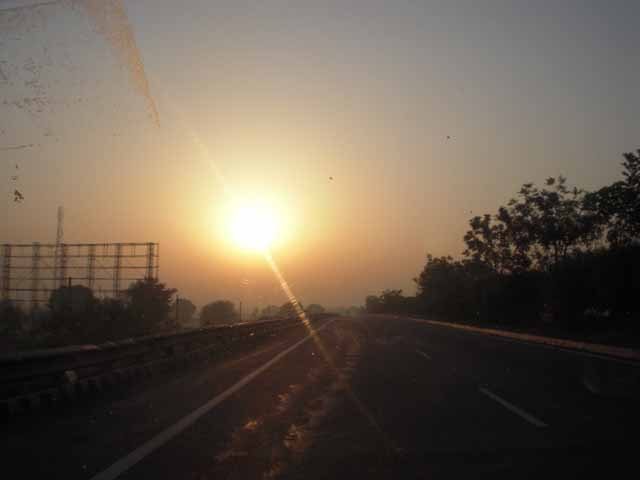 Since it was wee hours, there was apparently less traffic, and it took us not more than one hour to reach our first halt at Garh Mukteshwar, a holy place, situated at the bank of holy river Ganga The name of the place is derived from the great temple of Mukteshwar Mahadeva, dedicated to the goddess Ganga who is worshipped here in four temples. We halted there for a while on the road only, to take few photographs of the surroundings. 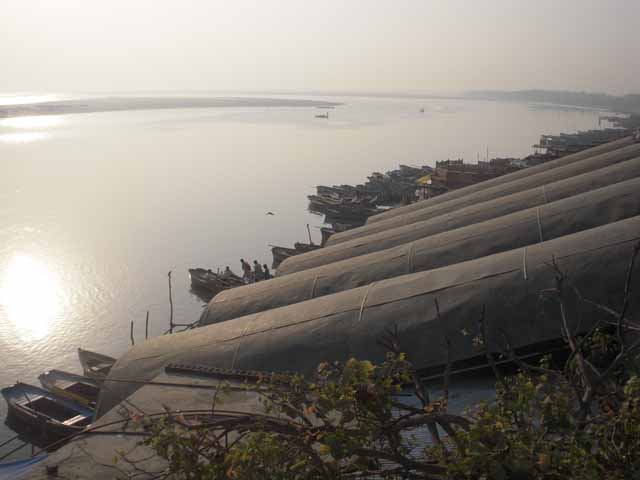 A shot of Ganges at Garh Mukteshwar

We continued our journey ahead on the smooth highway and crossed Moradabad in two hours. After that there was a massive jam ahead because of road construction on the highways and ate our two hours to cross a stretch of 3 km. The road ahead was fine till Rampur, and we took the left turn from Ahuja Filling Station to catch NH 87. The journey ahead was a real test of my car’s suspension and shockers, and I had to drive zig zag to avoid the potholes for practically 40 odd kilometres. It was 12 by the clock and we both were going crazy in search of decent hotel/dhaba to fill our bellies. Paranthas cooked by mummy came as a last resort which she forcibly (motherly attitude) packed along with us in the morning. We both thanked her on phone, had tea over a small tea stall and move ahead. We decided to hit Mukteshwar through Bhimtal as it also gave us a chance to visit the lake. We reached Bhimtal by 2:00 pm, parked the car in the parking lot aside Bhimtal took some of our photographs with the lake background. We both had Karhi Chawal with Coke from a restaurant around which was worth of a meal. 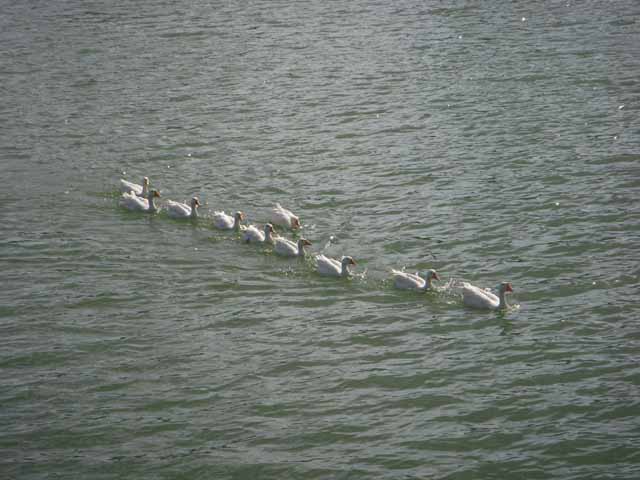 A Queue of ducks in Bhimtal

Kshitij took the driving seat for the journey above. After 15 minutes of drive, we rolled down the windows of our
car and switched off the stereo to enjoy the wonderful sound that mountains’ air had to offer, and believe me it was doing wonder to our senses and we were enjoying the view of Himalayas with every turn of the journey. 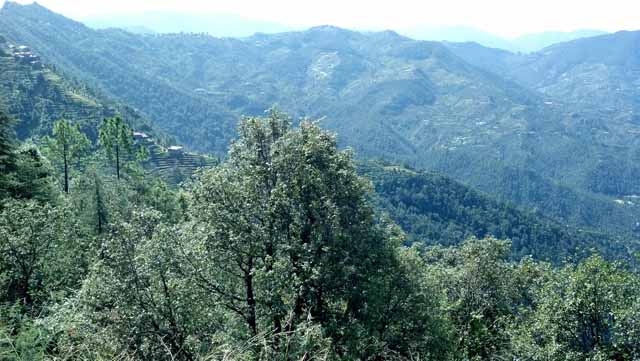 It took us around two hours to reach Mukteshwar from Bhimtal, and the moment we stepped out of the car it was freezing cold. I did not waited to get ourselves settled in the hotel, unzipped my bagpack and put on the jacket to my relief. We thought of staying in KMVN hotel because of its proximity from Chauli ki Jaali, but dropped the idea after hearing the heavy tariff from the attendant at reception. We drove 3km back and settled ourselves in British Retreat in just Rs. 1,400 for one night stay which was quite less for the amenities and ambience of the resort. 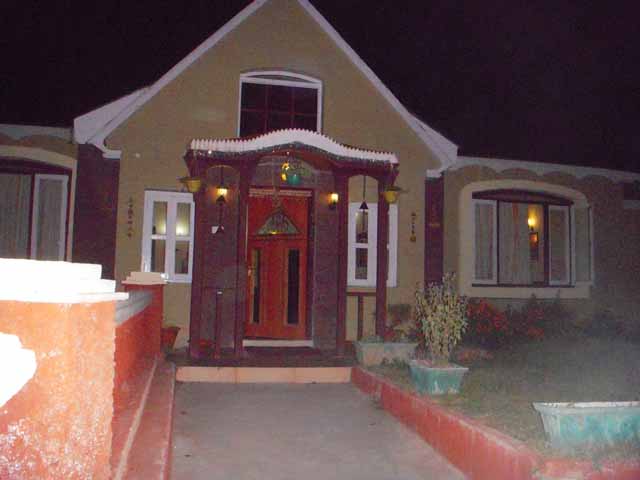 Our room while stay at Mukteshwar

We checked into our room by 6:30 pm, took bath and slipped into the quilts as it was quite dark outside and there was no mall or market to stroll around. By 8:00 pm, we thought to go out of the hotel and check the nearby areas. It was so dense dark just outside the hotel that even the valley on other side of the road was not visible. There was no light glow coming even from a distance as the entire population of the region is just 3,000. We went back to our room, ordered the food, surfed television for sometime after having dinner and slept thinking to wake up early in the morning to enjoy the sunrise at Chauli ki Jali. As usual, my slumber broke late at 8 in the morning, so we hurriedly took bath, packed our baggage, checked out of hotel and move towards Mukteshwar Mahadev temple—a famous temple of Lord Shiva. We parked our car at its gate and decided to first visit Chauli ki Jali and explore the surrounding areas. We started climbing up the hills from a pathway aside the temple periphery, and after half a kilometre distance the view of the Himalayas were unbelievably stunning. We were at an altitude of 8,000 ft. with a 180-degree viewing sight of Himalayas and as we moved on, reached a place where there was no road ahead except the deep valley and the lush green surroundings. I had never experienced such a beautiful view of mountains, even though I have travelled to a number of hill stations. 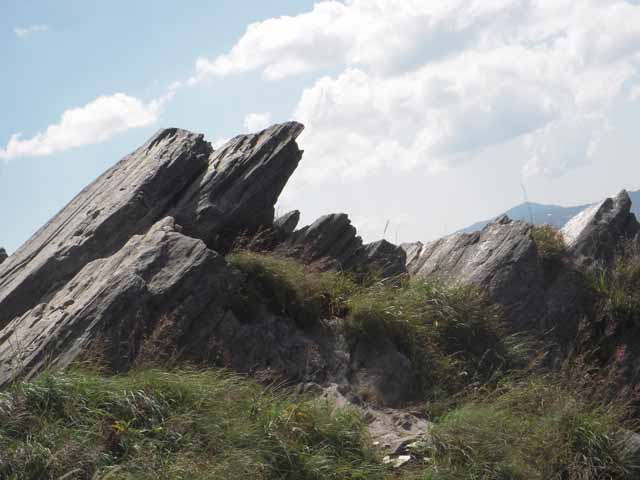 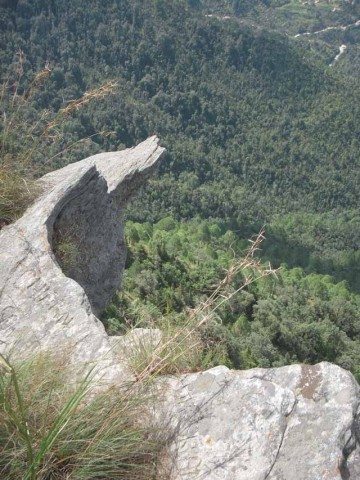 After resting at the edge of the cliff for sometime, we started looking for Chauli ki Jali. As per mythology, it is believed that a Demon and a Goddess fought a battle in this place, and there are faint outlines of a sword, a shield and a trunk of an elephant which stands as the testament of the battle. There is a natural lattice around the rock. Lots of people throngs to this place, as it is believed that barren women who came and touched the lattice are blessed with babies. It is also said if anybody passes safely from the “Chauli ki Jali” is blessed by Lord Shiva and all his prayer are answered by the almighty. 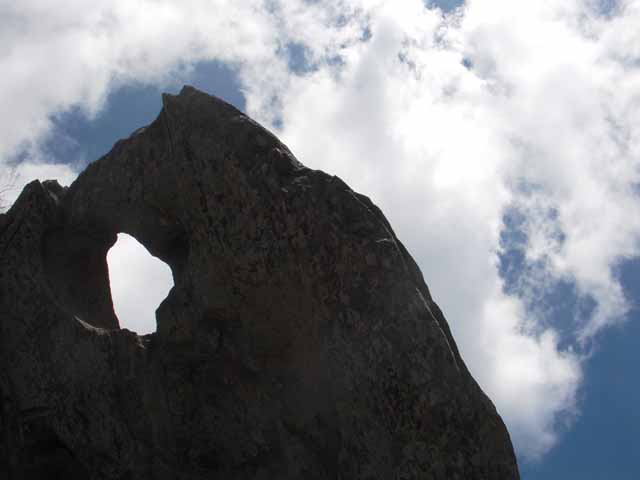 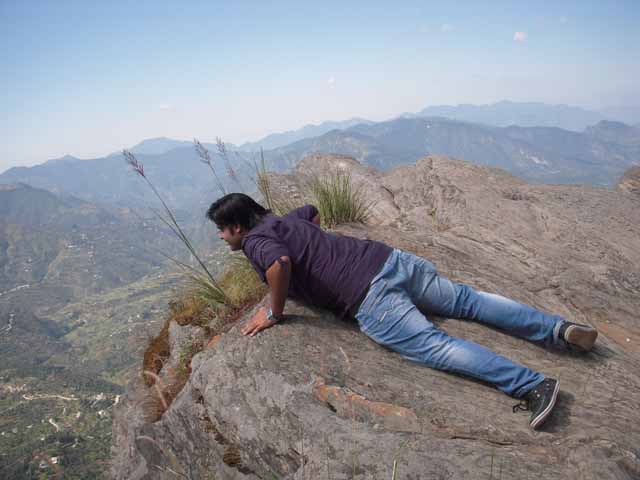 Kshitij getting scared at the edge

We enjoyed panoramic views of the place for almost two hour, visited the Mukteshwar temple, paid deity to God and decided to drive back home. While driving back, we stopped at a fruit shop and tasted different local fruits of the area.
While crossing Bhowali at around 2:00 pm, the idea struck my mind to visit Nainital also as it was at a distance of just 10 km from there. So we both mutually agreed on the idea and drove towards Nainital. We parked our car in the parking aside cricket ground, and decided to have our meal at Embassy restaurant. Since it was a Sunday, the restaurant was overpacked not only because of the weekend rush but also for the quality of food it offers. After having lunch, we strolled around the Mall Road for sometime, bought some jams and honey, posed around the lake and started our journey back to home by 5 pm. 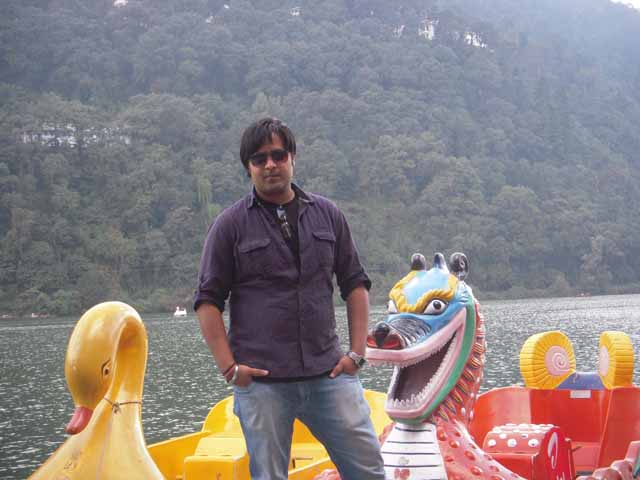 Kshitij posing ahead of Nainital lake

While driving down the hills, the sight of fog rising up the hills make our journey more memorable. While coming back, we took three halts for dinner and tea and reached home by 1 am.

A Drive Through the Hills-Mukteshwar was last modified: May 22nd, 2021 by Gaurav

During Ramzan Eid , we had a long week end holiday which I wanted to encash through visiting the nearby place and spend some quality time with family. Hence, we decided to visit Nainital which is a hill station and around 400 Kms from Lucknow. To reach to Nainital we have 4 options 1) By Train Journey till Kathgodam and from Kathgodam to Nainital by hiring taxi 2) Through UPSRTC Volvo Bus 3) Hiring a taxi 4) Hiring a Driver for own Car 5) Self Drive.  All the options except 5 were not working favorable to us due to Ramzan holiday and there was no availability of train ticket, and engaging taxi and driver is very very costly affair. Hence, I made up my mind to let me try self-driving.