Even though me and my friends (Sumit and Alok) stay in NCR, we seldom get opportunity to socialise in-person due to day-to-day professional and personal commitments. However, at the end of every year we try to spend time together through a vacation. For 2015, we were eyeing Manali! Unlike our last four trips, this year we planned to travel by HPTDC’s Volvo bus as we were slightly scared to drive on black ice because of our past experiences.

December is a season of holidays and festivities, so we booked the bus tickets well in advance for 23th December with our return ticket for 28th December evening.

HPTDC Volvo buses for Shimla and Manali operates from Himachal Bhawan, Mandi House Delhi in the evening. The travel time between Delhi and Manali is usually 12-13 hours depending on traffic and weather conditions. Since we were booked for 7:30pm bus, we reached Himachal Bhawan well before time. At the beginning of the journey all passengers were given vomiting bags and a bottled drinking water.

The bus halted for a while near Karnal for dinner in a dhaba offering pathetic food. I expected the Volvo to have halted at a decent restaurant/dhaba, to maintain its reputation. After the dinner, I guess every passenger in the bus slept except me. My eyes kept on gazing through the roads the entire night, the bus crossed Aut at around 4:30 am but the 3 km long tunnel was not there, wonder if the road has been diverted. By 7am, we were crossing Kullu and I was thrilled to see the morning aura of the mountains and snow laden cars coming down from Manali.

It has snowed the previous night as predicted by various weather forecast channels/websites. We reached Manali sometime around 8:30am. We got off of the bus and was welcomed by bone chilling cold. The temperature was somewhat around -1 degree C and it was hard for us to get acclimatized fast to this harsh cold. The fresh snow was everywhere around.

From the Bus Stop, we hired a taxi to our hotel Hill Top, checked into the room. Few years back, Sumit has stayed at this hotel so we trusted his choice and get it booked in advance at a pretty affordable price of four days, we got delighted to see the pretty neat suite having four beds with unobstructed Himalayan views from the balcony. Trees, rooftop, balconies were laden with fresh snow, but everything starts melting as soon as the Sun showed off in the sky. 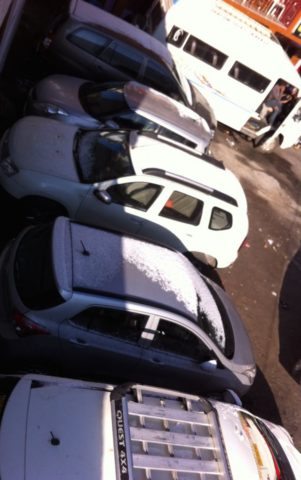 So on Car tops 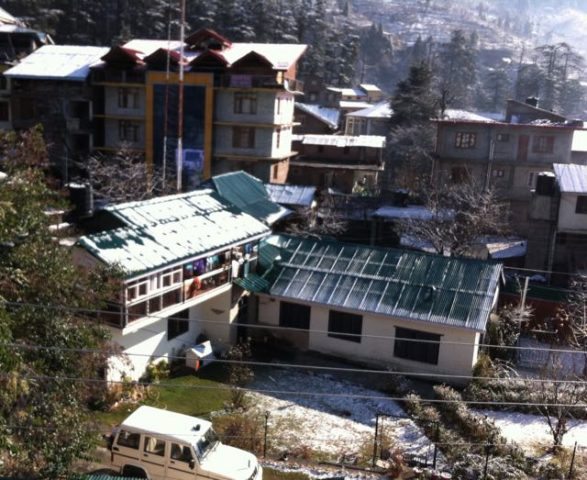 We decided to go easy with sightseeing for the day, so just visited Hidimba Temple, Buddhist Monastry and walked around the Mall Road.

The surrounding of the Hidimba temple were very well maintained by Manali Municipal Corporation and was a great place for nature walk. 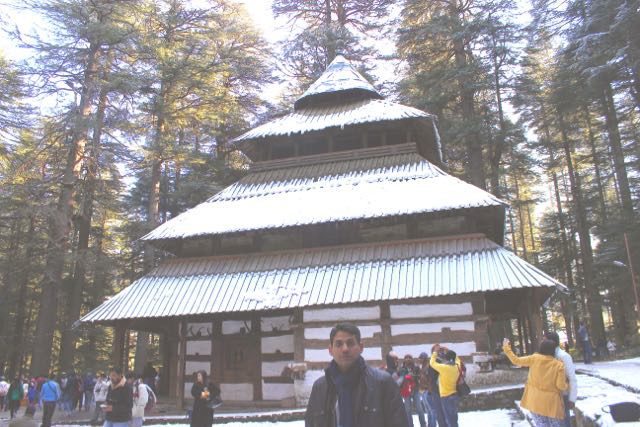 Hidimba Temple in the Backdrop 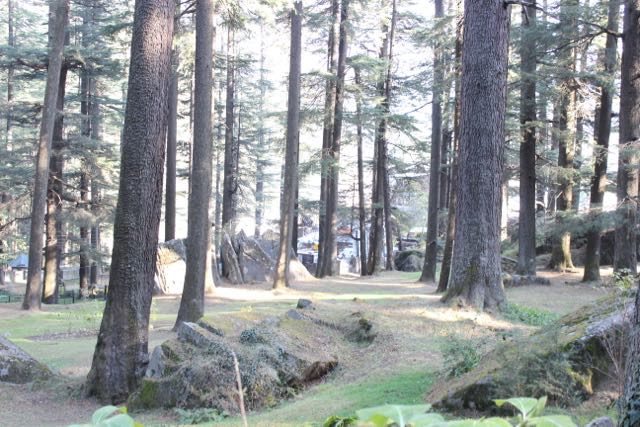 We also got to see a small Ghatotkach mandir near Hidimba temple. Ghatotkach was the son of Hidimba and Bheem. 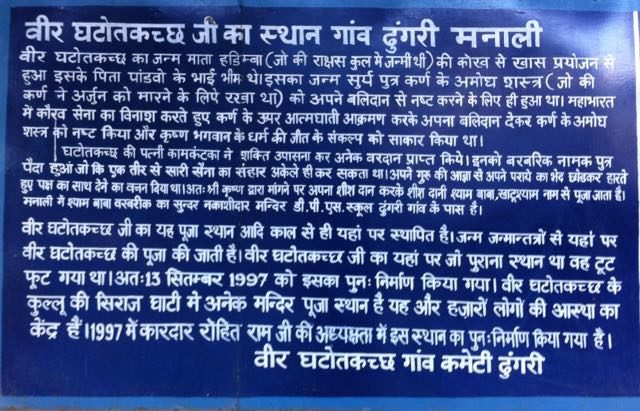 My leisure-loving friends were reluctant to walk back to the hotel, so we hired an auto and it dropped us at Mall Road. There we had our lunch in one of the vegetarian restaurant and went to visit Monastery. 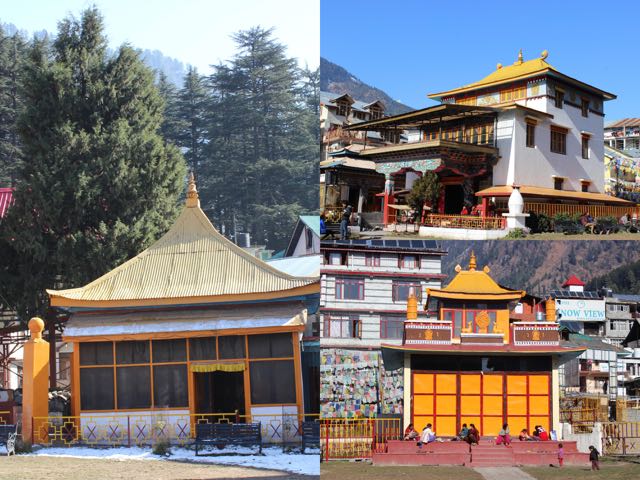 We spend some time clicking photographs there and then returned back to our hotel because it was quite cold and our bodies were taking time to adjust to this harsh cold.

We had dinner in our hotel and came out for a post-meal stroll in mall road. All the shopkeepers and mall road market association were busy making preparation for tourists expected to arrive on next festive Xmas day. The market was getting decorated and indeed adding to the beauty and charm of the city. Our next day (25th December) plan was to visit Solang Valley, so thought of booking a taxi in advance and got a verbal booking from one of the taxi operators at Rs 700 for the 14kms round trip (Solang Valley is at a distance of 7kms from Manali Mall Road).

Next day when we reached the taxi operator office for our scheduled travel, to our surprise, the owner demanded Rs 1,500 and refused to offer any taxi at the pre-agreed price. The sudden rush of tourist must have transformed him into a opportunist businessman.

A bit frustrated, we headed towards the local taxi stop and there the situation was even more worse and nobody was agreeing for the trip in less than 2000 bucks. Luckily we managed to hire in Rs 1200 for the round trip. The cab driver was quite a funny character, but seemed to have really good knowledge of everything around him, he kept enlightening us about every passing bend, corner, mountains and even the political situation of Himachal. 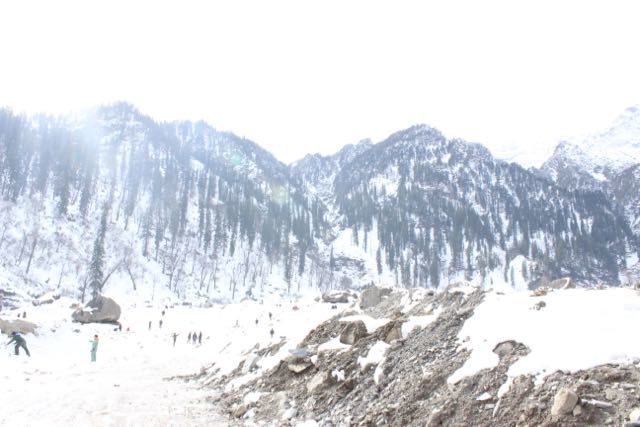 We hired snow suits at a shop of driver’s choice and proceeded further, the traffic situation there was no different from Delhi, there was a huge traffic jam due to sudden inflow of tourists. The only respite was beautiful surroundings and snow-laden mountain views.

After around two hours, we managed to reach a place from where we could easily walk up to Solang. The entire valley was covered with white snow sheet, and adventure activities like zorbing and paragliding which used to be attraction of this place were altogether missing. 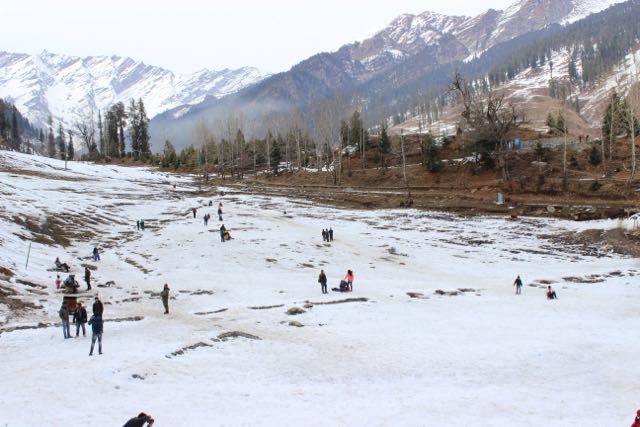 An addition to Solang Valley was a ropeway which could take you upto an additional height of 500ft. 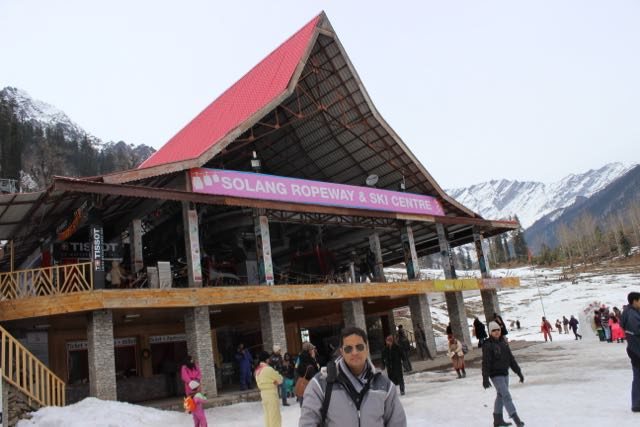 We initially thought to hire horses to visit the Shivling that forms naturally during winters of every year, but could not find any due to heavy crowd. So we decided to explore ropeway and bought three tickets for Rs. 1500 (I found it to be a bit expensive for 1.3km cable car ride). 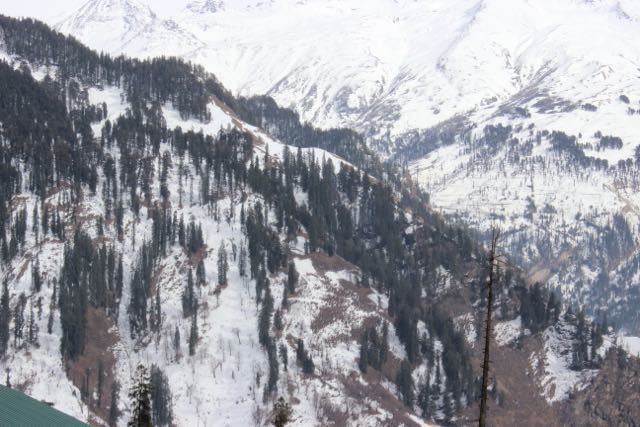 A shot of the valley

However, reaching there at the top made us realise it was worth a spend, the views from that height were spectacular and the entire landscape was buried under at least 2 feet of fresh snow. We kept playing there in the snow for almost two hours and then finally boarded the return ropeway trolley down to the valley. 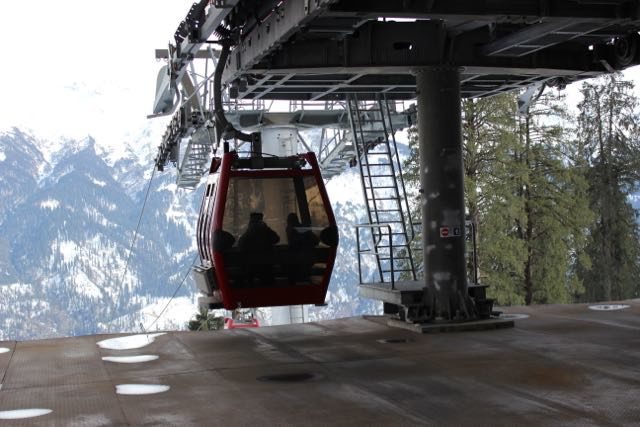 While heading back to the hotel in the taxi, we stayed quite most of the time, engrossed in staring the beauty of the snow laden hills, passing streams, river and hues of dusk.

Blue and red, is that the sun Million magic in reflection Billion colors, zillion hues Here goes worries, there my rues. No poet, that’s…