When we started for Dooars, we had no intention to visit Mirik. People would rather prefer to stay in Darjeeling and would like to visit Mirik for a sight seen. Instead we took Mirik for mainly two reasons. One was lack of time. I.e. we had only one extra day to spent out of our schedule and the other was I personally wanted a hill drive with some stiffer experience.

Previously I read some advice from Darjeeling tourism website of Mr.Raj and thankful to him for his valuable advice about the roads to follow towards Darjeeling and Mirik. People want to visit Darjeeling may always take the road via Mirik not the Pankhabari, which is really stiff and narrow, not really recommend for novice drivers rather can take the Mirik ( Alipurduar Road) then to reach Darjeeling.

The main reason is that, one can view the best scenery and tea garden views all along the way. Though the road is much lengthier than that of Pankhabari one and would take a couple of more hours to reach Darjeeling. The roads here is not so stiffer also. For me it was not a choice as we were destined for Mirik only and scheduled to back on the next day. 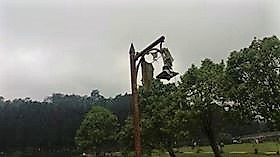 So we started our next journey to Mirik on 23rd May 2016 at around 0500 hrs from Murti. From Murti resort to Coronation or Sevok bridge distance was 45 kms and before entering Siliguri topped up fuel in a pump and headed for Darjeeling mod where old hill cart road crossed the path. The distance from Coronation to Darjeeling Mod was 26 kms. This is NH 31C also called Purnia-Siliguri Road which ended in a right turn to take Nh12 named Alipurduar or Rishi Road up to few kms from Mirik town and from there NH 12 took right to its own journey.

After crossing Siliguri traffic before taking uphill drive we settled down in an eatery to have some breakfast. From Darjeeling Mod to Sumendu Lake at Mirik was 48.9 kms. Up to Mirik the roads all the way was quite well, freshly paved and not so stiff at hill terrain. Here I would suggest an important tip for the self driven roadies and importantly for those using GPS. The road we took followed by GPS was through Matigara, there is another way through Panighata but the problem aroused more upwards in the hilly terrain, when we left Rishi Road to take Dudhia-Bankulung Road which eventually joins again to Rishi Road only to save a merely 2/3 kms of total journey and as we followed GPS and as in Rishi Road, there were not so many people to ask.

We took a wrong turn and left Rishi Road to Dudhia-Bankulung Road following GPS. Initially the road was good and eventually it began to break but my heart steadied when I saw a Polo rushed us in an reciprocal course and I felt confident regarding car’s ground clearance after seeing that car. Gradually the road started to break and near a village (Sourene) it became a broken paved way. The river Teesta became a far downhill ribbon then and like a reflective snake very far below along with the deep gorges by the side of our path. People were nowhere to see and when we got one he told us that the good road was not so far and though the path is broken but motor-able.

So we continued but after many hair pins and almost fully broken road with a 20/25 degree continuous elevation, occasionally screeching of clutch and tyre enabled me to stop and offload heads. It succeeded for a while but finally around 6/7 kms before Rishi Road junction the vehicle was impossible to move up. The burning rubber smell and the sound of throwing pebble underneath by wheel”s thrust made me stop completely and enabled me to take a decision of about turn.

There are many fellow drivers around who might say about the ridiculous decision I took to turn the car in a uphill road but I did the best what I could. So I offload all passengers, tried a bit lighter and near the hairpin backwards, where the elevation was little eased backed and turn the car to a reciprocal course.

The downhill was nothing to say but the situation was gurgling in my spine quietly with a chill tremor. Soon after we cought the missing turn of Rishi Road the road became smooth again. A fresh road with classy tea garden views overwhelmed us all to forget about the wrong turn experience. Before Mirik town a thick fog engulfed us and the we proceeded with all lights on in low gears. 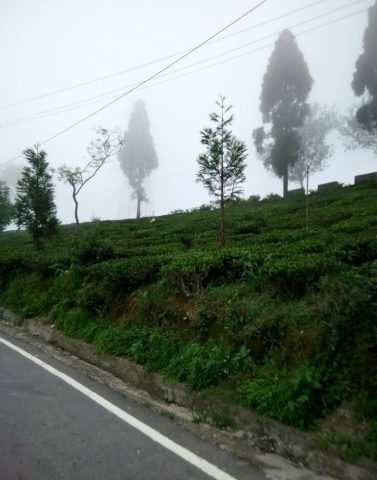 Tea Gardens along the road 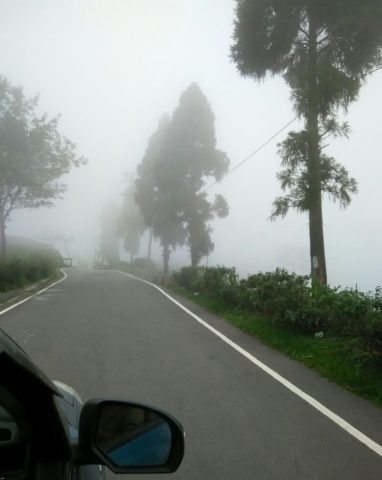 Mirik is a picturesque tourist spot nestled in the serene hills of Darjeeling district of West Bengal. The name Mirik comes from the Lepcha words Mir-Yok meaning “place burnt by fire”.Mirik has become a popular tourist destination for its climate, natural beauty and easy accessibility. The centre of all attraction is the Sumendu lake, surrounded by a garden on one side and pine trees on the other and linked together by an arching footbridge called Indreni Pull (Rainbow Bridge).

A 3.5-km-long road encircles the lake and is used for walks with the view of Kanchanjangha on the far horizon. Boating on the quaint shikaras and pony riding are available. Apart from Sumendu lake the other sport in Mirik are, Rameetay Dara – A viewpoint near the town from where one can see the surrounding mountains and the vast plains below. Bokar Monastery- It is located on the way to Rameetay Dara and is famous as a Buddhist meditation center.

Rai Dhap – Source of drinking water for Mirik and a picnic spot. Debisthan – A temple of a Hindu goddess located on a hillock near the Sumendu lake.Tingling View Point – A panoramic view of the tea gardens can been seen from here.Tea Gardens – A number of tea gardens producing the famous Darjeeling tea are located in and around Mirik. 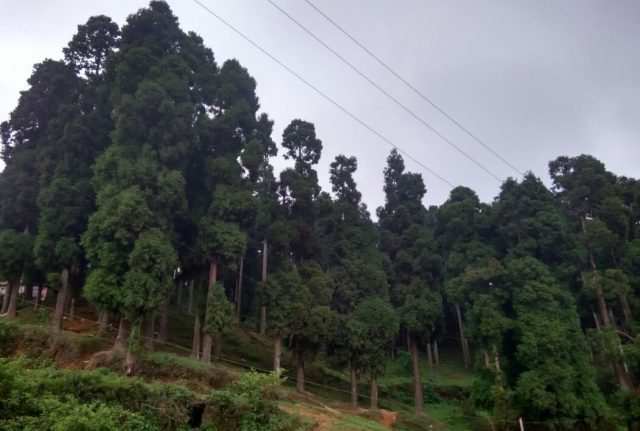 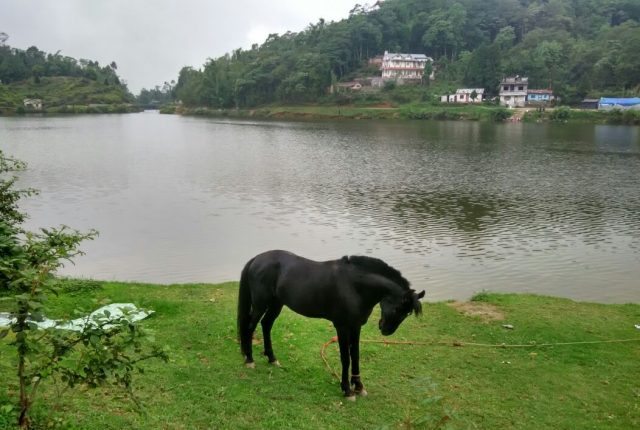 Lone ponny by the side of lake 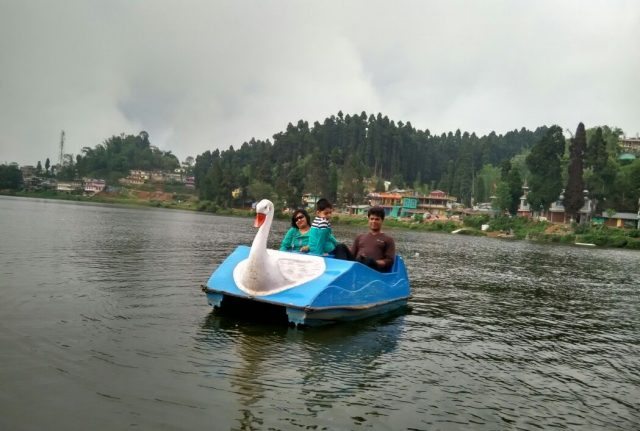 Boating on the lake

Sadly Mirik was not like which I expected and enjoyed back in ’90s during a visit. The garden surrounded the lake was awesome full of seasonal flowers. Now the forest walk around the lake was so non-exciting and common. Boating in the lake was only a little relaxing but soo common like any other boating centre in any city. Also there were a few paddle boats and no Sikaras as before.The water was filthy in the lake and the Rainbow bridge has transformed into just an operational bridge crossing.

Though the climate was still fresh for city dwellers but one can fill it changing. Also city became over crowded and lost its virgin touches. Gothic light stands around the lake walk clearly lacked maintenance some off them already corroded beyond repair. I was wondering about the silly politics that how they have ruined the main city sources like tourism.

We stayed in a budget hotel called Hotel Payel booked through goibibo at a cost of less than INR 1000 for each room. The food and staff was good but other amenities like car parking Wi-Fi etc was quite bad and the rooms were also not so good.

The hotel was near market place and hadn’t a lake view. After settled down we went for a lake round and had that discouraging experience about the area. Before returning to Hotel took a vist at Boker monestory and ended in an exciting day full of activities.

We intended to start up early next morning at dawn but from the midnight rain started heavily with thunder storm. The situation was getting worse and we took a half heated start at 0630 hrs in the morning with a chance of land slide.
It was drizzling then when we started with the paved road downhill full of debris created by severe rain. 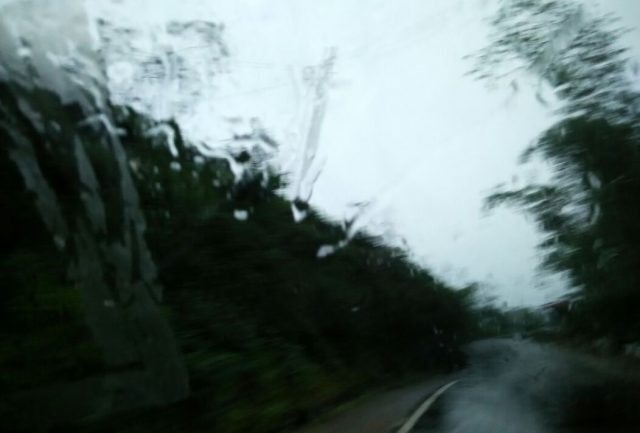 Heavy rain on the way

Our planning was to finish our long drive up to Kolkata within the day 24th May’16 and it was a hefty 757 kms via Purnia -Bhagalpur. It was a long route but we took it just to avoid the last exhausting journey of so called Bengal to Bengal road”s nightmarish experience. The road we took was splitted from dalkhola and went through Purnia- Bhagalpur- Banka- Deoghar- Durgapur- Bardhaman- Kolkata. The entire stretch was very smooth except some traffic and very few road renovation.

At Bhagalpur we were compelled to take the city road because the bypass was in renovation stage and faced a severe traffic. Other than this, except some patches all the journey was smooth. At Siliguri it was 0800 hrs and we ended our destination back in Kolkata at 0130 hrs on 25th. In between we took halt at Purnea, for breakfast in a road side dhaba, Banka for lunch, had a great fish meal over there and near Bardhaman again a road side dhaba “Rubi” was a great halt to had our dinner.

Our road saga finished with a tone of melancholy and as I cherish each day to do the song again my heart aches to become a part of another epic journey again in the travelogue yet to come.