Last year I’d gone to Visakhapatnam in Diwali vacation for four days. But only one post will not do justice to my experience so it is going to be three posts series. As Visakhapatnam or Vizag is only 12 hours from my hometown by train, we decided to go there on a short trip.

Train was at an unholy time of 6.00 am! And day journey in sleeper class (AC had no seats left for reservation) was bad due to heat. But the scenery was beautiful.

We reached in late evening and went to the hotel where we had booked room. We had been told on phone that they will provide an extra bed. We were given an extra mattress without cot! But as it was late, we decide to stay on there only. Service was average but food was bad. Dad and I went to the nearby APTDC office and booked ourselves for tour of Araku Valley and Borra Caves on 28th. We also hired a car for local sightseeing on 27th.

The breakfast was better as it consisted of idli and dosa. After breakfast, we left for local tour. The roads and the cleanliness of the city impressed us. Our driver was polite, pleasant and experienced but understood only English. First we went to Ramakrishna Beach. Unlike Puri, the beach was quite clean. I felt so elated seeing the Bay of Bengal and beach, even in the scorching sun. On the horizon we could see ships and the Dolphin’s Nose which is the most prominent landmark of Vizag. This huge rock, 174 m in height and 358 m above sea level, is shaped like a dolphin’s snout;hence the name. The area around RK Beach is highly developed from tourism point of view. The statues and unique pillars really beautify the road along RK Beach. 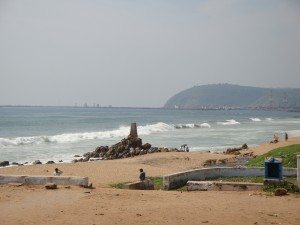 Then we went to Simachalam to visit the famous temple of Lord Varaha Lakshminarasimha. The deity is such an angry personality that he is always covered with sandalwood paste. The actual form of the idol is viewed only once in a year, during the Chandana Yatra. The view from the top of the hill temple was awesome. Camera was not allowed inside. 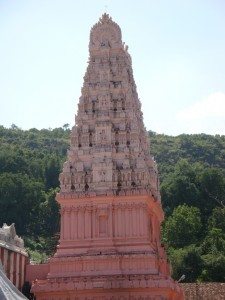 From there we came back to Rushikonda Beach. It was less developed or rather less commercialized than RK Beach but still equally beautiful. Our driver knowing that we were Bengalis, took us to Hotel Sandhya which was a shack serving very tasty, homely and typical Bengali lunch at low price. I was so happy to have a good lunch. 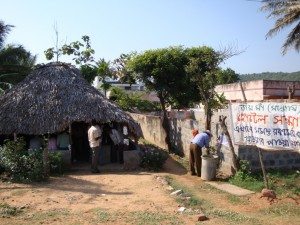 Then we went to Fishing Harbour for boating. The smell of diesel fumes of the boat caused more nausea than the turbulence of ocean waves. But the view was wonderful. Artificial embankments have been built to stop waves from crashing on to the harbour and nearby coast. 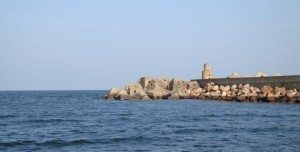 After a tiring day, we returned to hotel. In the evening, we went to RK Beach in auto-rickshaw. Auto rickshaws are quite cheap in Vizag. One just needs to bargain a little. The area around RK Beach has a Ramakrishna Mission Ashram and a KaliMatha Temple along with other attractions.

After enjoying the setting sun and jhaal muri on beach, we went to Kalimatha Temple which was decorated for Kali Puja on 28th i.e. Diwali for non-Bengalis. Then we went to the famous CMR shopping mall as my parents have never been to a shopping mall before. But it was a disappointment compared to the real shopping malls like those in Pune.

Before the trip, I had searched the location of Pizza Hut in Vizag on Google. :D In the morning I had asked the driver to show the place too. So after shopping, we went to Pizza Hut. And that ended the day blissfully.

The place is not a fancy one, as in , does not have the looks of modern restaurants. It looks like a house-converted-to-an-hotel and the ambience is ‘homely’ and food is hygenic. The (south indian) dishes are served on a plantain leaf (cant use spoon for eating Dosa:-) ).