Tirupati is famed for the shrine on the Seven Hills of Tirumala dedicated to Lord Venkateswara. The town of Tirupati is one of the most ancient and sacred pilgrimage spots in India. The hill near the temple is called ‘Tirumala’ or the “sacred hill.” The temple is said to be the busiest in the world and the Brahmotsavam is undoubtedly celebrated for its oriental pomp and pageantry in September every year. Sri Venkateswara temple in Tirumala is located 860 metes above sea level atop a hill named Venkatadri. It is the last of the seven hills one has to traverse through from Tirupati, a transit point for Tirumala. This temple’s importance in Indian religious milieu cannot be undermined.

My wife’s sister and her husband were coming down from US to visit tirupati as they wanted to end the year by visiting tirupati and taking his blessings to start a new year and asked me to accompany them. As we were six adults(I, my wife, my sister-in-law and her husband, my brother in law and his wife) and my one year old kid and my car can accommodate only five people so we hired a 7+1(driver) seats Innova.
We had a heavy breakfast and no one was in a mood to have lunch at home so we packed our lunch and started our journey at 3:00 PM from Kundlahalli – ITPL road. We have taken the whitefield road to reach old Madras road.

We hit the old Madras road in 15-20 minutes, it joins the highway some kilometers before Hoskote. After Hoskote, the highway widening work was happening but it was not a slow crawl and driver was maintaining the speed of 80 KMPH. We reached Kolar woody’s restaurant (a nice place to have meal) in an hour and half but we all decidced to stop at Café Coffee day further 5 KM from Woody’s. We had coffee’ shakes and our packed lunch in coffee day and it’s a nice place for a tea-coffee break. After crossing Kolar, the speed picked up (upto 100 – its risky though) and we were crossing the Palamner ghat section as it was getting dark.
Before Chittoor town, we took the left turn into the byepass, this road is in the same condition it was in about 4 years ago, so many potholes and very bumpy. After crossing Chittoor we take the right turn towards Tirupati, the road is awesome. Well marked with cat’s eyes and lane markings, it is a pleasure to drive at night.

This stretch can be done at an average speed of almost 100 kmph. One should just look out for a few road humps which will make you brake from a high speed. We reached Tirupati town exactly by 9.00 PM, so we had covered a distance of 265 kms in 4.5 hrs. We decided not to stop at Tirupati and directly start for tirumala as we were not very hungry and Darshan was first priority in our minds.

We reached top in another 30-45 minutes and went directly to office for geeting Darshan slip against the VIP Letter darshan.

We Called up our contact and he in turn called his representative who was to escort us to temple for darshan however due to rush he was not able to help us and we decided to use the VIP Darshan letter which we were carrying with us.

We had a tough time there in the office due to heavy rush however one officer was very courteous to see my kid and wife and issued the slip for darshan. Now our next task to collect the tickets against the slip from Vijaya Bank. My sister-in-law and his husband decided to collect the tickets from Vijaya bank and in the mean time we have to feed our kid as it was very late and getting cranky now and also finalise a room as our darshan timing was morning 4:00 AM. We finished all by 11:30 PM and ask driver for some restaurant for food and came to know that all good restaurant will be closed by now. We want to have something so went to bus stand and had fried rice, noodles, idlis and tea from some small shops there. I must say food was not that bad and it was pretty warm and freshly prepared.

We finished our dinner and went back to the Guest house room to relax and shut eye for few hours. Once at the entry point of line, we realised that the crowds were quite dense, though we entered from VIP darshan line but we do not want to take any risk from the huge queues which are a hallmark of the temple and to save time we ran to cover the distance and reach Vaikunta Dwara to enter the q-complex in just half an hour. We were just inside the temple and queue was moving very slowly.

In this whole journey my kid was sleeping in my arms and I must thank him for sleeping otherwise it would have been very difficult for me to handle small kid in such a crowd.
In almost half and hour we entered into the main gold plated hall just outside the sanctum sanctorum, we were placed in such a vantage point that we could get a clear view of the deity. Long verses were sung and puja performed with heaps of ‘Puliyogare’ or tamarind rice placed in huge containers in front of the idol.

Darshan was quite a small time affair now a days and you are usually herded out even before you get a glimpse of the lord. After a darshan, we walked out and been to Hundi.

Luckily we have finished our darshan and were offered prasadam laddu inside the temple. We came out of temple at 5:00 AM and bought polybags to carry the prasadm laddu. My brother in law went to collect the laddu prasadam and remaining of us sat down to relax our legs. After collecting the laddus we offered coconut and camphor to the God at some distance and you can clearly see the main gate of the temple from this place. Though there are 3 more temples on the other side of the lake but we were very tired and thought of having some nice tea. We searched a lot for Ginger tea but it’s our badluck we have to end our search for normal strong tea. In the meantime ladies did some shopping as well.

By this time kid was awake and its time for his feed as well so we went back to room and gave him cereal to eat and adults were fighting for using bathroom. 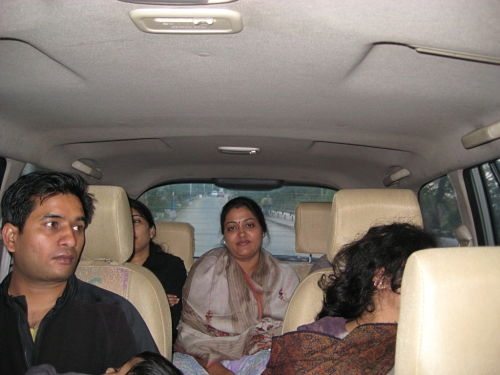 early morning coming back after Darshan

We drove downhill leisurely and reached the hotel Mayur by 7:30 pm and ordered idlis’ poori-bhaji, dosas, coffee and had enough to start back to Bangalore. We left Tirupati by 8:30 AM and had a coffee break again at Café day at Kolar and reach Home by 1:30 PM.

So following our original plan to cover Bijli Mahadev, Rewalsar Lake, Shikari Devi, Kamru Nag Lake, Karsog, Tattapani, we reached Kullu on the morning of 30 July’11. Since there were regular buses plying on this route, it allowed us some time to freshen up and to have a quick breakfast. Later we took a mini bus till a village nearby the shrine from where it is just 2.8 km soft trek passing through some of the villages