It was 7 am and i got up with the sound of the alarm and was feeling the pain while moving the legs. Too much of walk yesterday was showing its effects so much that even medicines were proving to be ineffective. I woke up Adhiraaj, wished him as it was his birthday and got dressed. Soon we got out of the guest house and to our surprise sun rays welcomed us. After facing the cold and rainy weather for the past 4 days it was nothing short of a miracle. As it was the last day of our exciting trip and all we needed was some sunshine to make it perfect.

With high hopes that the weather conditions will remain the same in this area of uncertainty, We went to the Nescafe shop nearby, ordered cappuccino and maggi and  discussed the plans of the day. As we moved out of the shop, we inquired locals about the bus or shared taxi to Badrinath. And it was time for some bad news as told by the locals “the buses and other vehicles were stuck due to a landslide on the way to Govindghat and a bridge had been washed away because of rains yesterday some 10 kms from Govinghat on the way to Badrinath. A makeshift way was made to counter that but that too was washed away”. My heart sank for a while but we went to the bus stop and kept our hopes high and waited. 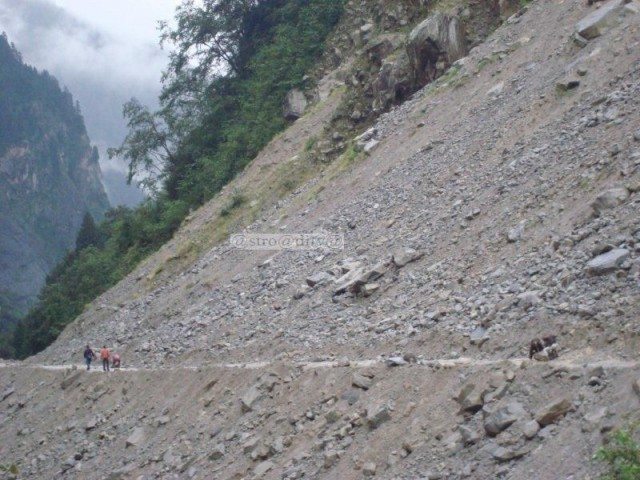 It was 10 a.m and we saw a sumo coming. As soon as it came to a halt, we rushed to the mob that surrounded the driver. As he announced that he was on the way to badrinath the sumo got filled in a flash. Luckily we got 2 seats at the back paid (Rs. 60/- each) and we started moving to badrinath. Badrinath is located at a height of 11,204 feet and is 24 kms away from Govindghat. On the way we crossed Padukeshwar, Hanuman Chatti and waited for 15-20 mins at two different points as BRO workers were busy clearing the roads. It was 11.30 a.m and we reached Badrinath. The taxi dropped us at a point where the road to the left was leading to the badrinath temple and the one straight was going to Mana- The last Indian Village before Indo-Tibet Border. We stood at that point for a while looking at the Mountain Peaks on our right breathing Joy and Freedom. 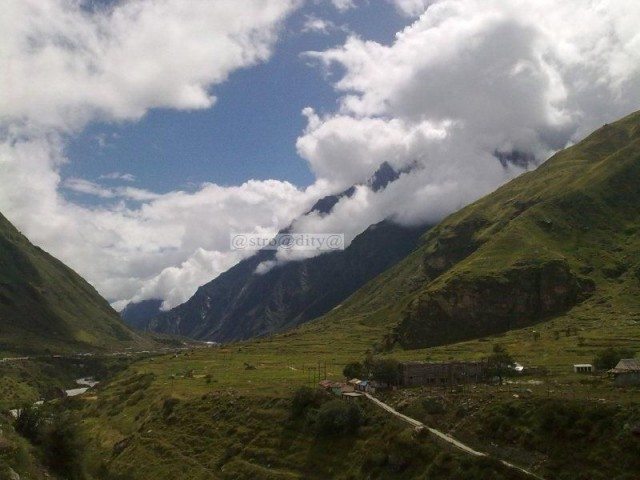 Still standing and admiring the beauty of nature at the same point, on our left we saw a G.M.O.U Tourist Rest House. We had a look around the Rest House, it was pretty clean, with 6 rooms to offer out of which 5 were empty. Reason – Off Season, Landslide and so no one had arrived. By any standards the room was a luxury with all the facilities, clean bathrooms and a geyser all coming at a price of Rs. 300/- for a day we didn’t go any further and settled right there. 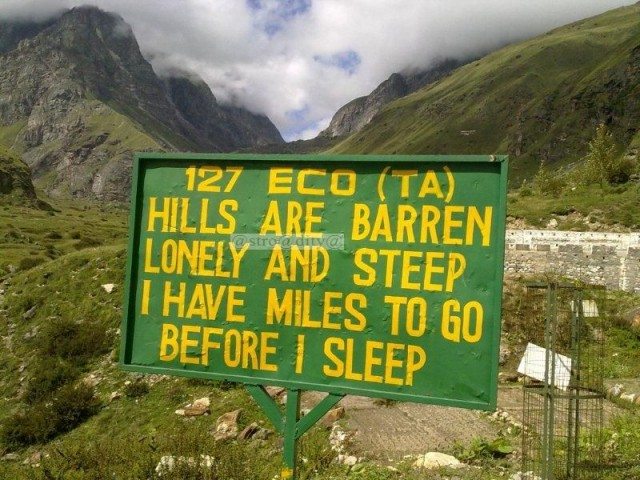 After some rest we got out and decided to go to Mana Village. Mana Village is 3 kms away from Badrinath and is the last Indian village. The border of India and Tibet is just 24 kms away form Mana Village. As no vehicle was around we decided to walk to Mana and the road till their was in excellent condition all thanks to the Army. 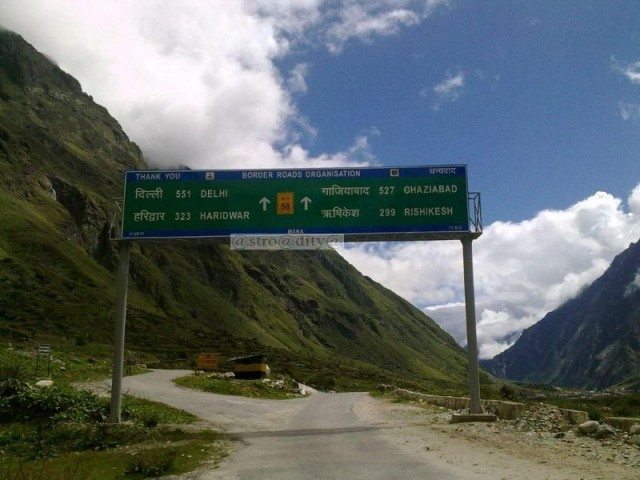 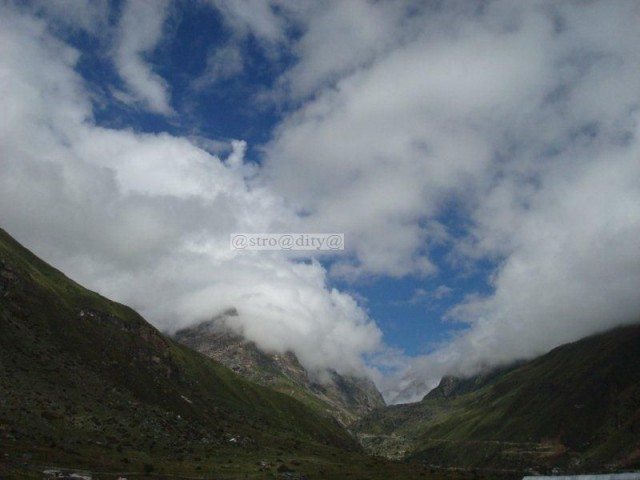 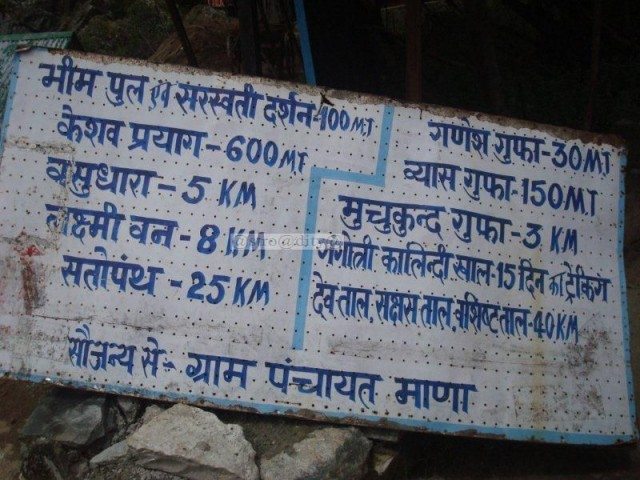 As we entered through the gates of Mana situated on the banks of Alaknanda Ganga, everything seemed to be a dream, it was like a page as descried in the story books. The people living in Mana are from the Mongolian Tribe. The path going through the village was good and led us to Ganesh Gufa – The place where Mahabharata was written and then we went to the Vyas Gufa. 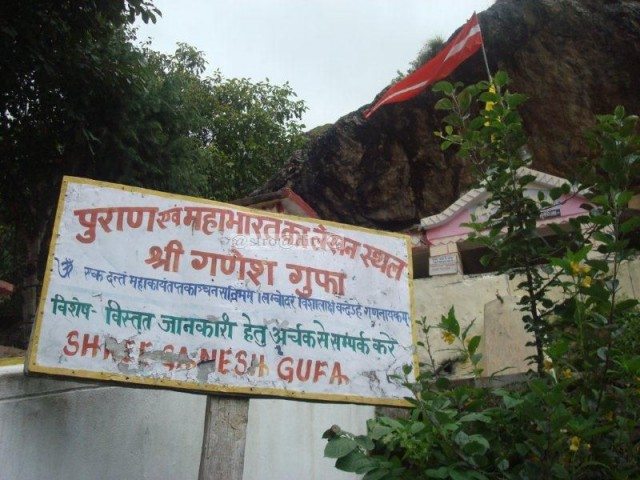 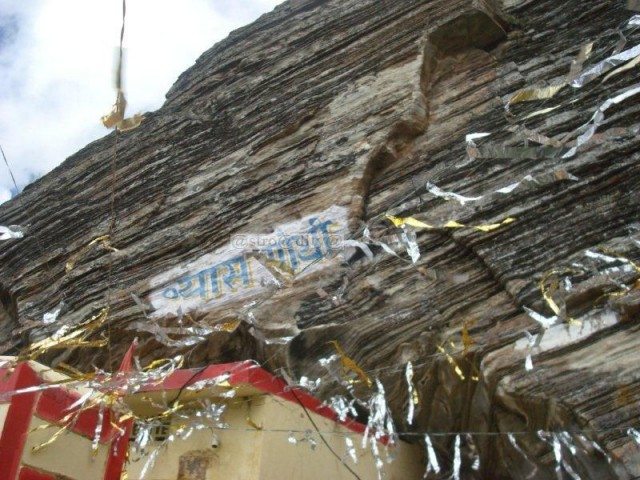 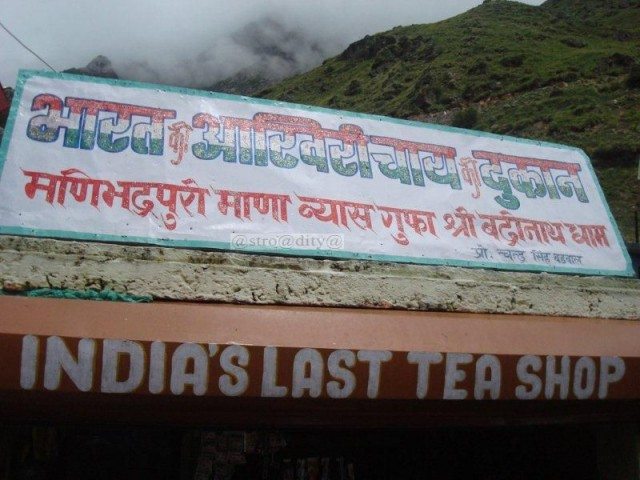 After paying homage at Vyas Gufa and tasting Gooseberry Squash at India’s last tea shop which i bet you is the best i ever had, we moved to the place “Bhim Pul and Saraswati Darshan”. 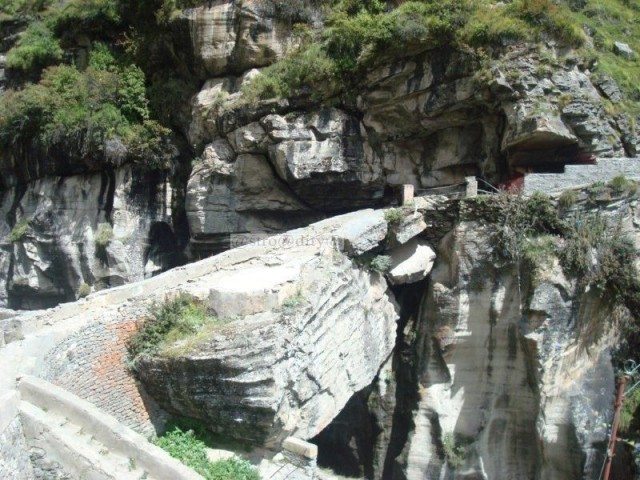 As the legend goes when the pandvas were on their way to the heavens (Satopanth), they came to this place and upon finding no way to cross the river bhim carried a rock and placed it there.

Way to the Heavens(Satopanth and Vasudhara Falls) 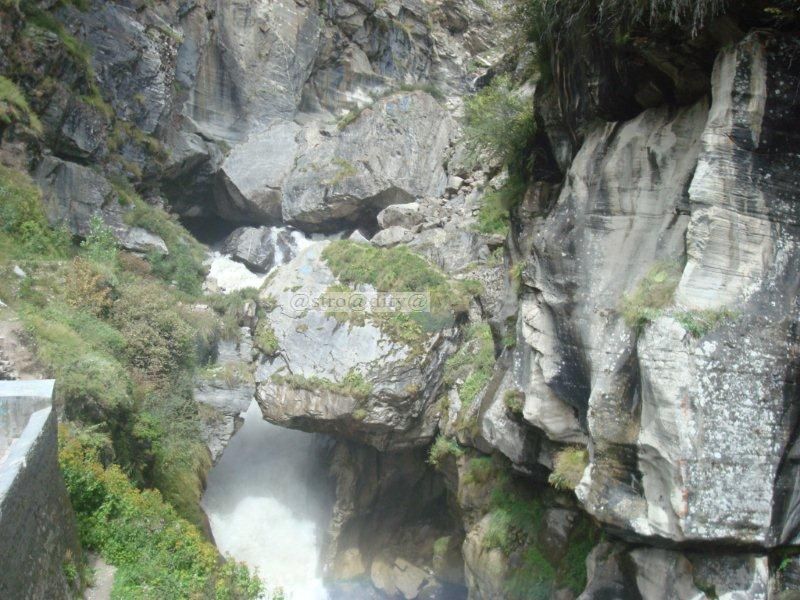 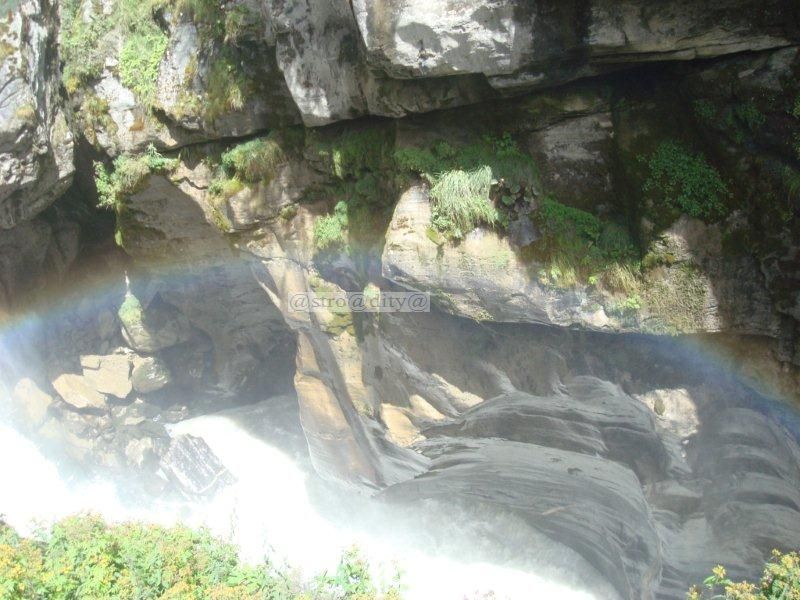 As we were admiring the beauty of the falls, on the right we saw a rock with the inscription as below. 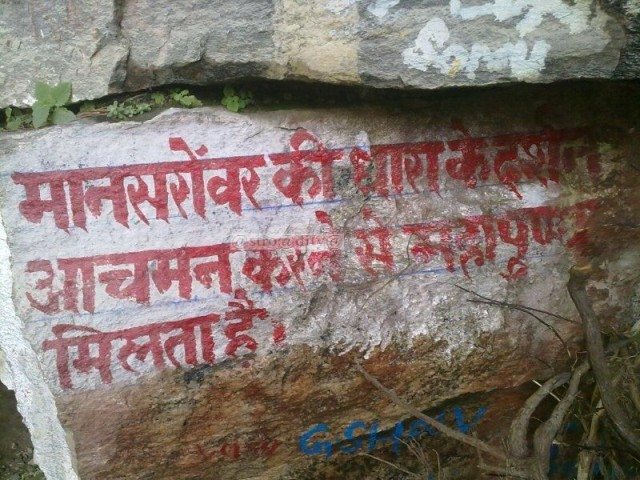 A water stream coming all the way from Mansarovar. 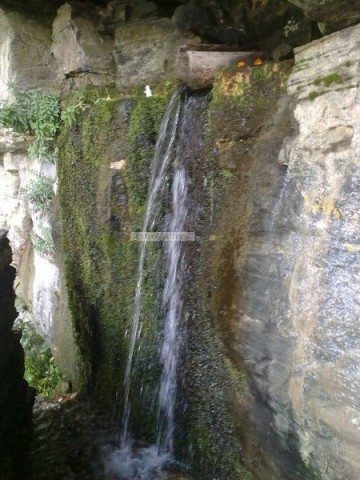 After sitting their for a while Adhiraaj decided to go to Vasudhara Falls, another 5 kms trek from Bhim Pul. I was tired and decided not too. I sat there for some more time and decided to walk back to Badrinath. It was around 3pm and i thought of exploring the Badrinath Complex. 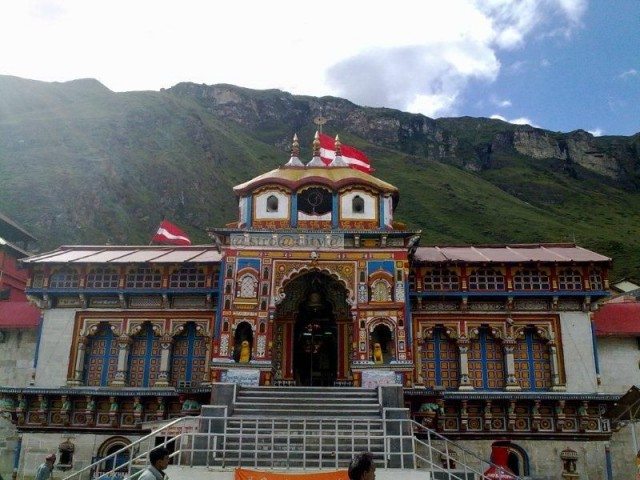 I entered the Badrinath Shrine, inside the main temple and  to my surprise barring the two priests no other person was inside the temple. It was all empty.I requested the priest to help me identify the deities inside and he told me cross the pandal and their i was, closest as anybody can go as the priest told me about the deities. Then i went to a tea shop near our rest house and had some tea. As i finished my cup of tea i saw adhiraaj coming after visiting the Vasudhara Falls. He had this big smile on his face. He was all charged up and told me about the place and i had a glimpse of the same in the camera and what else…i missed it… 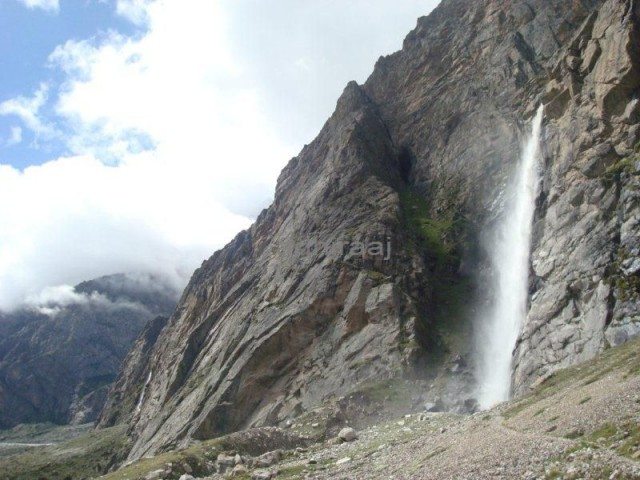 We chatted their for some time along with a cup of tea and went again to the Badrinath Temple (Adhiraaj’s 1st time). We managed to reach their just in time for the Aarti. 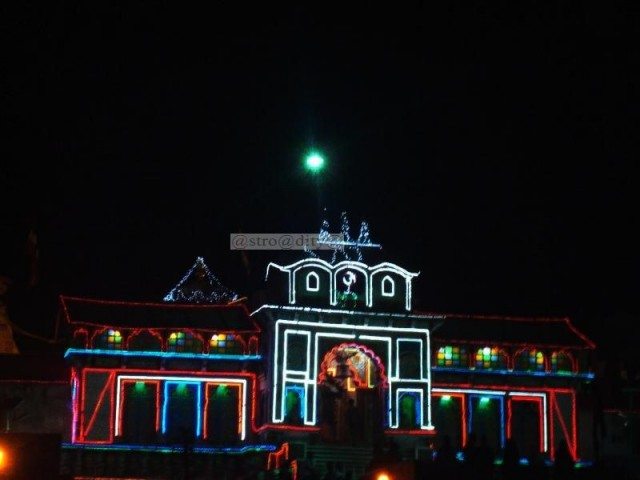 We just stood their and saw the whole proceedings inside and it was tranquilizing. The sound of the bells, the prayer, people chanting made the atmosphere divine. After the aarti it was time for the treat. And we celebrated Adhiraaj’s birthday over Sarson Ka Saag and Makki ki Roti with the backdrop of Badrinath Temple…. That moment was like heaven in front of heaven….

It was the day of our return, back to the civilization. Back to the daily office routine and back to the hot weather of Delhi. We managed to get up at 4 a.m as we had to catch the 5.30 bus leaving to Haridwar but before that we had to go Badrinath Temple once again. We got dressed and came out of the rest house and it was cold and dark, it had been raining all night and clouds were all around us. So, we went to the Badrinath Temple for the Morning aarti and shingar of the deities. It was the time when we saw the entire black stone image of Lord Badrinarayan. 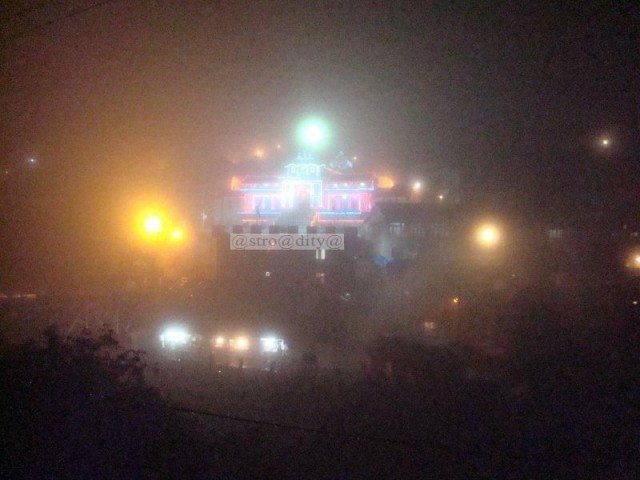 Badrinath temple at 4.30 a.m among the clouds

The clock was moving fast and against our wishes we had to move in order to catch the bus to Haridwar…..

It was still raining and we ran to the Badrinath Bus Stand. We saw two packed G.M.O.U buses all set to leave. We managed to get some space to sit in the front. It was uncomfortable and it remained so throughout the journey.

Around 5 p.m we reached Haridwar and Adhiraaj took the bus leaving to Chandigarh. I decided to go to Har ki pauri and managed to reach their in time for the Ganga Aarti. 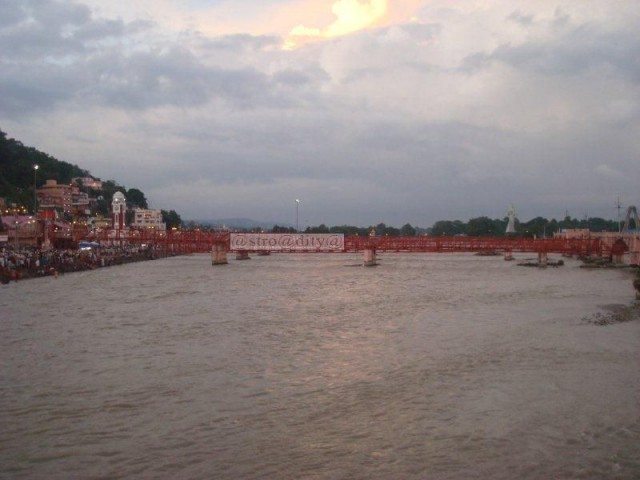 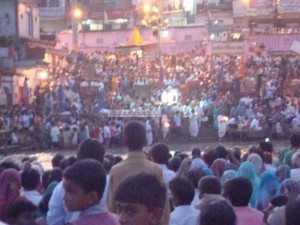 I stood their for some time absorbing the atmosphere with hundreds of people offering prayers and placing diyas made of leaves and flowers in the river. Then i went to the old and famous shop of Mohan and had dinner. After satisfying my hunger with chollye puri and halwa, i went to the haridwar bus stand, got a vovlo back to Delhi and just like that it was over… The months of planning, the excitement, the joy was all over. And i was left only with the memories and a promise to make this trip, trip to the land of gods again……The End……

Trip to the land of Gods – Hemkund Sahib, Valley of Flowers, Badrinath and Mana Village….Part 3 was last modified: March 29th, 2020 by Aditya

This is in continuation from my previous post. 23.08.09 (Fort Cochin) The best way to explore the near by area of Fort Cochin is…