After driving almost 400 km on odd and even roads, we reached Bhuj at or around 8 pm. Bhuj is one of the biggest cities in Gujrat with all modern amenities and plenty of Hotels and eateries, but not tourist friendly. The infrastructure developments are to accommodate the business requirements of the industrial hubs in Gandhidham and surroundings. After dropping in one of the hotels of choice, we stepped out for a sumptuous and delicious meal. A restaurant offering North Indian cuisine attracted us. After finishing, we decided to know the facilities of site visits, most of which are far from the city.

After enquiries from different sources, we found, there was no arrangements by the tourism department, in absence of which the private tour operators charge exorbitantly. Also, it is categorically alarmed, not to dare travelling in own vehicles because the roads in the Rann are very miss-leading and no helps are available in case of mishaps. Kutch is one of the least populated districts thus the logic is very tactful. The bargained package offered was at Rs. 12,000/- for a two days sight-seeing which included White Rann, Kalo Dungar and some local sights on day one and Lakhpat, Narayan Sarovar and Mandvi beach, the other day. 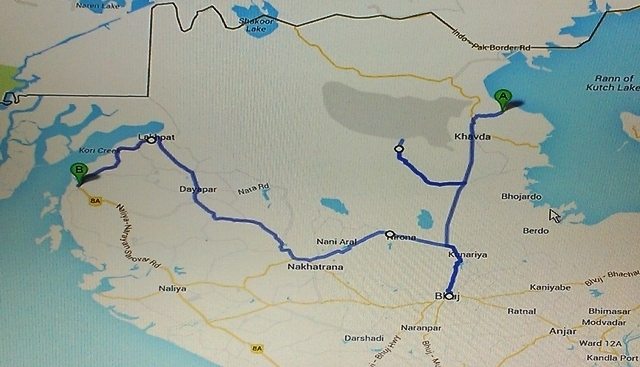 On perusing the road map and GPS, I decided to opt driving all through despite of the threats. Driving on Delhi-NCR roads helped me dare take the challenge. The local sights in Bhuj did not impress me much hence, we decided to start early morning to Kalo Dungar and drive all the way upto Mandvi in a whole one day. 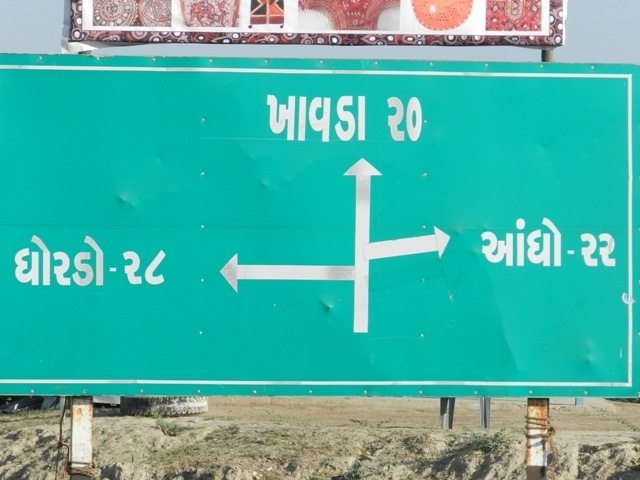 As per our plans, we left the hotel as early as 7 am. After enquiring the route we started for Khavda, from where the permit for entry to the White Rann is obtained. A road straight leads towards the famous India Bridge, a few km from Pakistan border. At a junction, we stopped for re-confirmation where we luckily met an SI in Gujrat Police. The officer, a Haji Muslim in his late fifties was the authorized permit issuing official, posted at the same Permit Post. He was waiting for the bus however, readily accepted our offer to accompany us. On our way we talked all about the administration, tourism, prospects of common Gujratis and reportedly good governance in Gujrat etc. etc. Honestly, the officer was quite diplomatic but the pain and anxiety in the community, of the infamous incident, could be easily noticeable. We were benefited by his guidance about the roads that helped us amend our program schedule accordingly.

After dropping him at his post and collecting the Permit, we travelled towards the road to India Bridge, the road was excellently kept by the Army. A few km prior to the bridge, a right turn leads towards Kalo Dungar, after passing by a village, a hilly track with serpentine road takes up to the very famous Dattatreya Temple situated atop the hill. The height is though less than 500 metre, the uphill drive is not for faint hearted. Very narrow, no barricades, lowly hanging cliffs and bushes, angular steep inclines and sharp turns make the drive very difficult and treacherous. I have however, recently experienced much dangerous inclined and curvy track while driving uphill to the Jakhoo Temple in Shimla. 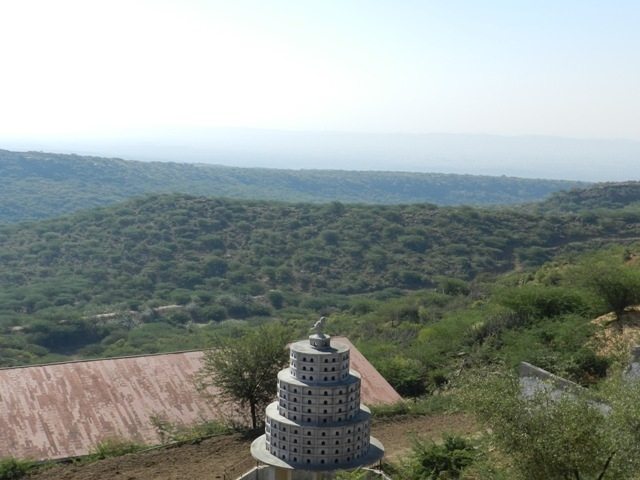 Kalo Dungar or Black Hill is loaded with multiple mythological stories, one out of which is regarding Lord Dattatreya and the wild Jackals, who are fed there since 400 years and strangely the Jackals reach the particular spot every time for relishing the meal.

“This is probably the only place in Kutch from where a panoramic view of the Great Rann of Kutch is possible. Since it is located very near to the Pakistan border, there is an Army post at the top; beyond here, only military personnel are allowed. 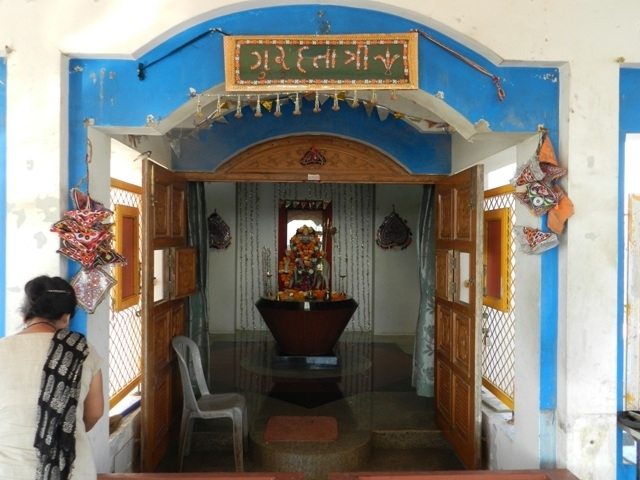 The Kalo Dungar is also famous for a 400 year old Dattatreya temple. Legend says that when Dattatreya walked on the earth, he stopped at the Black Hills and found a band of starving jackals. Being a god, he offered them his body to eat and as they ate, his body continually regenerated itself. Because of this, for the last four centuries, the priest at the temple has prepared a batch of prasad, cooked rice that is fed to the jackals after the evening Aarti.

Another, legend has it that there was once a holy man named Lakkh Guru residing at Kala Dungar and worshiping the Lord Dattatreya. He used to feed wild jackals. There came a day when he found he had no food, so cutting-off a part of his body he offered it to the jackals, saying, “Le ang!’ (Take body part). Over the centuries, this got corrupted to ‘Long’. 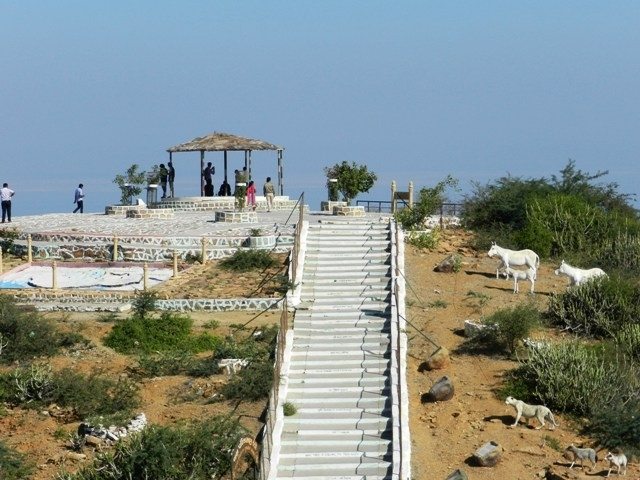 The Peak of Black Hill

A story in December 2010, reported strange phenomenon observed at Kalo Dungar, when some visitors noticed that their vehicles were hurtling down the hill at speeds over 80 kmph which was very strange. And this too, with the ignition switched off. The phenomenon was brought to the notice of the collector during the recently concluded Rann Utsav. The collector sent his team to get a first-hand experience and after finding that the claims carried some substance, a team of experts from the Gujarat State Disaster Management Authority (GSDMA) was called to study the phenomenon. 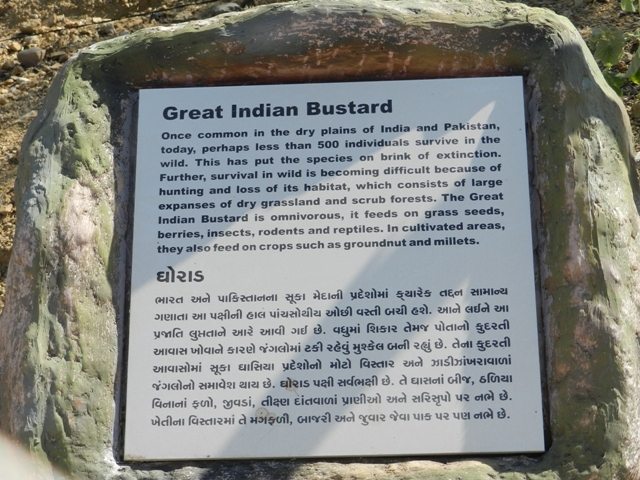 Educating about an Extinct Specie

My observation, three years later in November 2013, I didn’t experience anything unusual while driving down the hilly track. Except, that despite of the reporting in 2010, administration did nothing to modify the track into safer for driving. 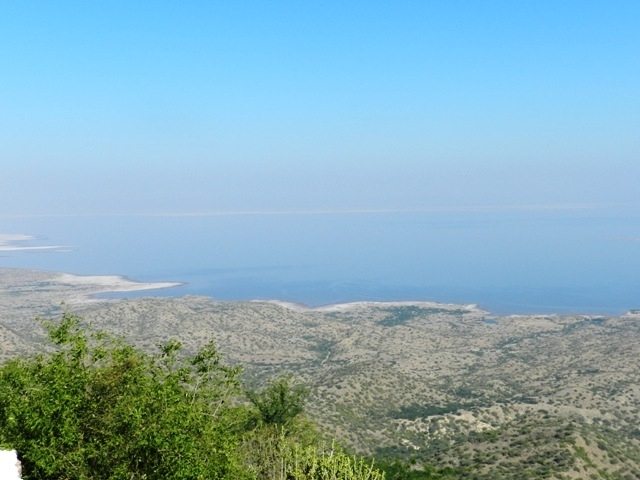 Water beyond the Marsh

The hillock is visited by most of the tourists for experiencing the panoramic and breathtaking 360 degree view of the Rann whereas the locals out of devotion and legends connected to it. A few steps ahead is the parking, the temple is though main attraction but tourists hastily pay obeisance to rush towards the edges for viewing the enthralling scenery. Due to vast emptiness around the hill, it is very windy. 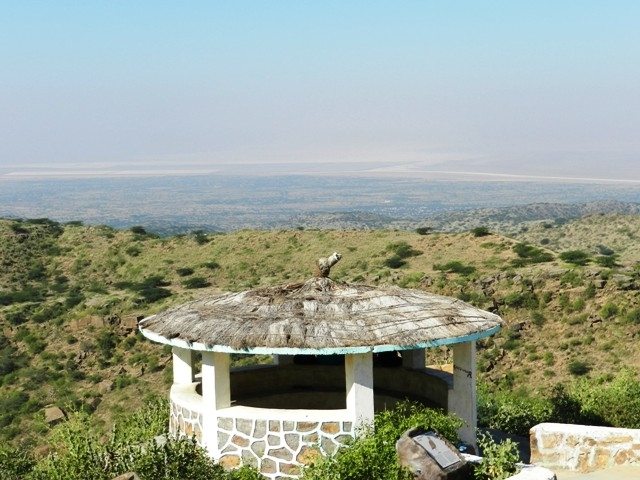 Safer Place to View the Surrounding 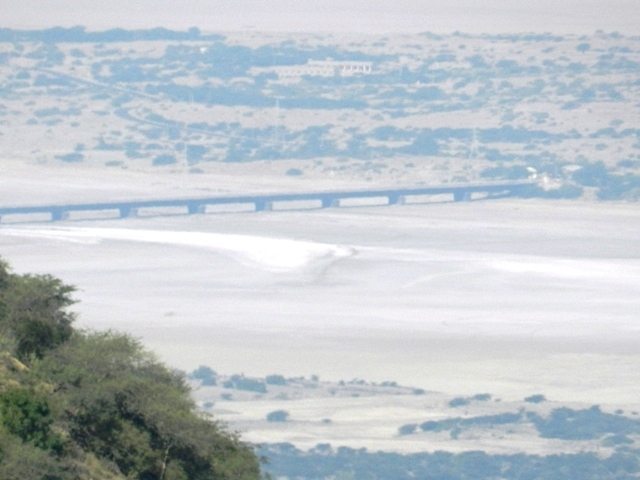 Far on the left, appears the blurred shadowy view of the famous India Bridge, beyond which lies the international border of the friendly state. Our Jawans stand with pride and vigil on the long stretched limitless and rugged border, protecting the nation and its nationals from any unwanted incidents. The vast white deserted land shimmers in the extra bright sun, retracting persistent viewing. Even the widest camera cannot capture the vastness in one frame. 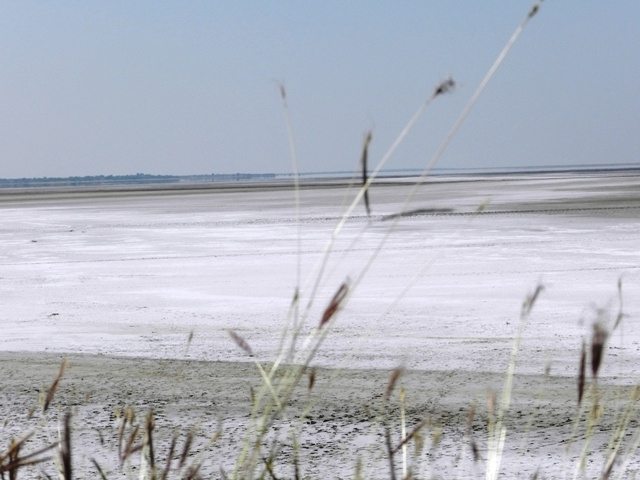 After an eyeful viewing, we stepped down to head towards the White Rann to see it from as close as possible. The permit, already obtained was supposed to be submitted to the BSF post at White Rann. On the way back, I couldn’t resist driving towards the India Bridge. Reaching closer, we found the bridge was no exception than any other road bridges, but its importance was multifold hence well guarded by the armoured BSF Jawans. I stepped out of the car and talked to one of them. My good luck, the Jawan belonged to Haryana and on looking on a Delhi number car, amicably talked and even allowed to cross the bridge upto the next post. Photography of the bridge is however, strictly prohibited. The Pakistan border from the bridge is though far-far away, the security arrangement was commendable. After lungs-full breathing in the no-man land, we crossed the bridge back and conveyed our gratitude to the Jawan, both for allowing us to cross the bridge and also for their selfless and immaculate service to the Nation. 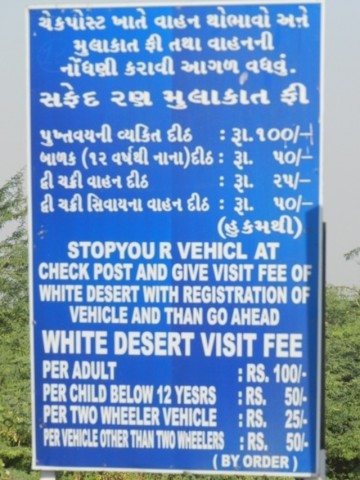 Our next destination was the much applauded White Rann, exclusively after the Amitabh Bachhan’s campaign. We reached back the gateway, Khavda again and drove towards the Rann. The road is though narrow & single after Khavda but quite well maintained except few pot holes and gradients at some patches. The famous Raan Utsav was about to start from December hence, a lot of mending and preparations were at pace. 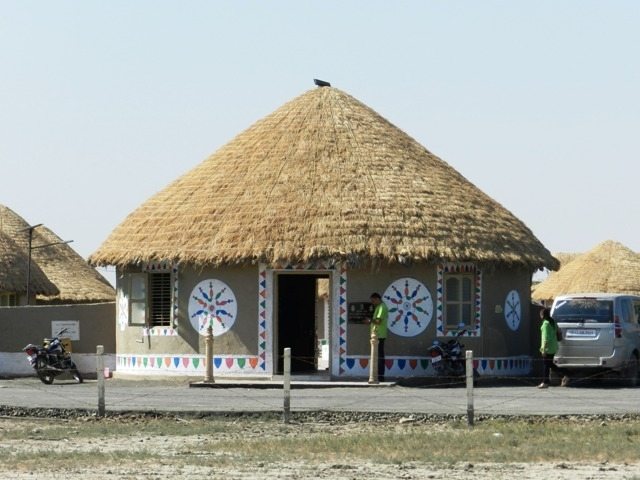 Luxury Cottage at the Rann

A colony of luxury cottages painted in multi colour, representing the colours of Gujrat was standing in rows amidst the barren land. A dusty track reaches upto the check point, where a team of BSF were busy in a routine of checking the permits allotted at Khavda by Gujrat Police. After the formalities, the vehicles are allowed to run on the barren flat landscape towards the much awaited white vastness. 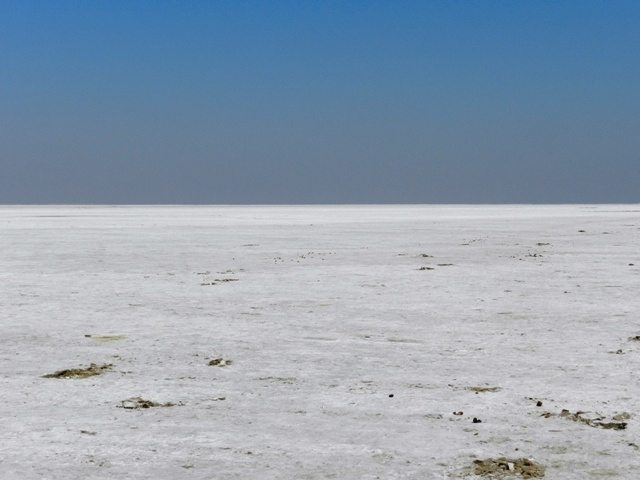 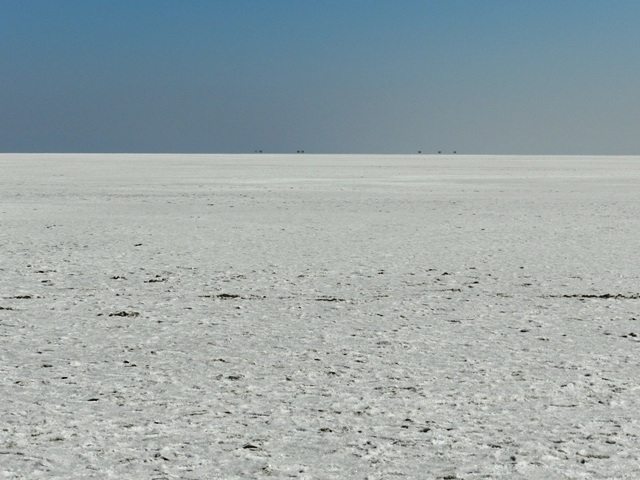 Nothing was visible on the track due to dense cloud of fine dust engulfing the surrounding. Reaching closer, we found few more vehicles parked and enthusiasts with cameras, clicking repeatedly. Come closer and the infinite vast white scintillating flat land covered with a blanket of crystallized layer of salt particles reach out upto the horizon in contrast of the deep blue sky beyond. 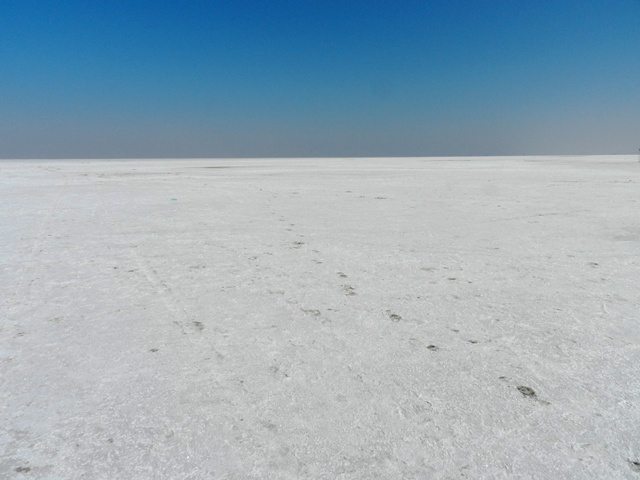 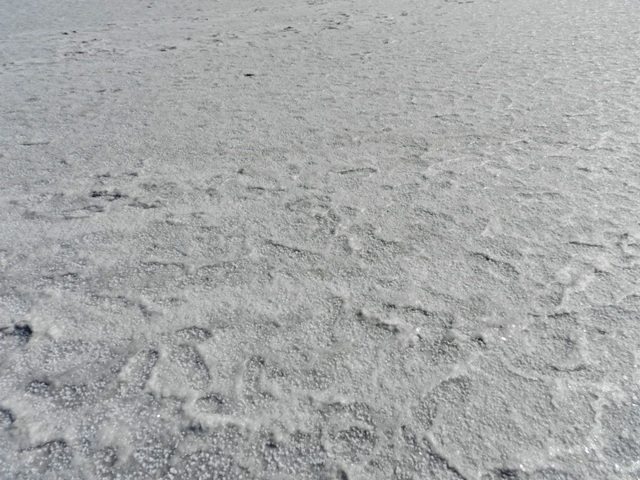 Sometimes, the harshest could be pleasantly soothing and romantic, picturesque without scenery and colourful in whiteness. Witnessing the illusion of the Rann is simply magical, you have to be there to experience the mystical sensation and I’m sure you will dive into the romanticism of utmost pleasure. 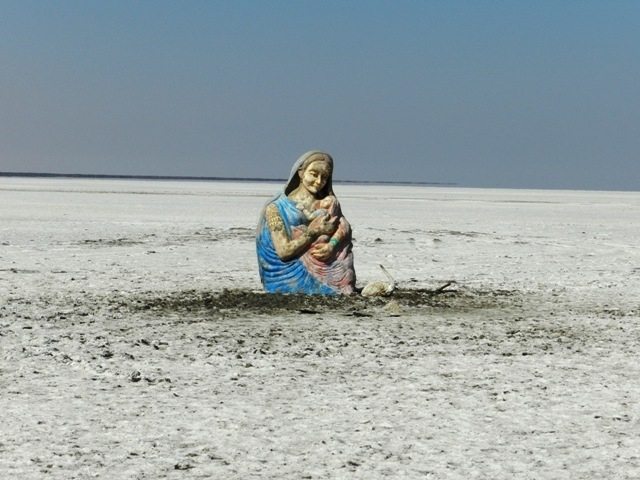 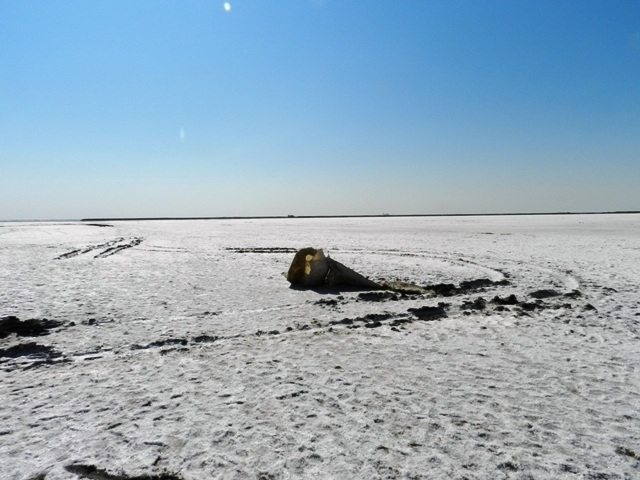 It was so pitiable to walk on the beautiful, unexploited, natural formation of thin layer of heavenly crispy substance. It was very pathetic to see the rugged foot prints of earthly creatures on the virgin land. The cruel pug marks of horses and camels and abstract boot prints of the civilized society added only in defacing the prolonged natural formation. I preferred to capture the magnificence in my camera without contributing in further devastation.