It had been 11 months that I had gone on any vacation for a very long time and my soul was anxious for taking a short trip. As usual workload and situations did not allow me the time to explore a new place. But as it is said when the time is right on the day of Janmashtami my friend asked me if I would be interested to go on one day trip to Amritsar with another friend of hers? I was very keen to go but I had said ‘NO’. That night I could not sleep as my mind said (don’t) and my heart said (I should go). The next morning, I hurriedly got up to take advice about it from my parents and when they said ‘Yes’ I didn’t take a second thought about it and straight away what-sapped my friend count me in for the trip.

On 7th September Friday I, Vandana, and Deepti took the evening bus to Amritsar. We had pre-booked our bus tickets. We had booked an Indo-Canadian Volvo bus and our pick-up point was Ramakrishna Ashram Marg, Connaught Place. Around 9:00 pm we boarded the bus and as we boarded we were awe-struck. The bus was a sleeper bus with super-fundoo beds. We were excited and decided to take pictures of it to send it to our friends’ ones to make them feel jealous. We were so tired that we decided to have our dinner which included home-cooked food like yummy Rava dosas and pao-bhaji and sweets for dessert and we slept. At 12:00 pm the bus stopped at a Karnal Resort for a toilet break and if somebody wished to eat or drink something like us – who took masala tea for refreshing ourselves. After 10 minutes break, we boarded the bus and dozed off again.

We woke up around 5:30 am and that too without the snoozing alarm. As we moved the curtain our eyes filled with wonder looking at the scenic beauty of dawn. It looked heavenly and we tried to capture it through the phone camera but the beauty of a place through the picture and through real experience is not the same. (in my opinion) 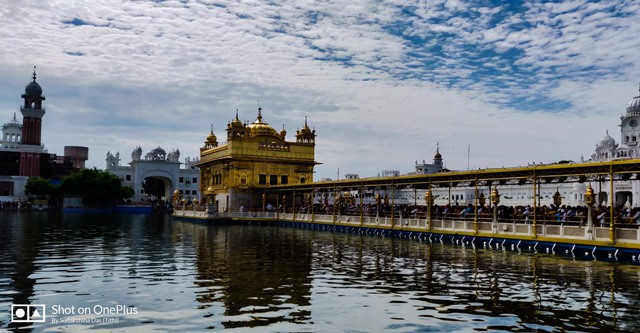 We reached our destination around 6:30 am. We took an auto from the bus-stand directly to the temple. Our main aim was to take a tour of the whole city in a day whatever time we had as we had to catch the early morning Shatabdi which left Amritsar at 5:00 am. We had not decided on any hotel, so we entered a budget hotel which was walking distance from ‘the Golden temple’. Our aim was to freshen up as soon as possible and enter the temple premises by 8:30 am. We were 15 minutes late from the time frame we had thought. Reached the temple area kept our shoes at the shoe counter and proceeded to enter the temple and stepped onto the water to clean our feet which is a norm while entering any Gurudwara. I could see the temple from the distance. As and when I entered I felt at peace and did not feel like talking to anybody. It was a moment where I could feel positivity all around me.

My friends decided that let us go and stand in the queue for entering the sanctum sanctorum. I was the bit apprehensive at first on seeing the line as I have ‘Ochlophobia’ (Fear of Crowd). But I gained courage and went ahead. We stood in the line for an hour patiently and entered the main temple. I was happy to listen to the areas (religious prayers) and was feeling elated as we had a successful darshan. As we stepped outside the sanctum sanctorum we had the ‘kada prasad’. We sat near the Sarovar (pond) and clicked some pictures. We realised that we were feeling ravenous as we had not had breakfast and the clock was also ticking. It was already 10:00 am. We came out of the temple premises and were searching for what could be the best place to eat. My eyes fell for a lassi shop. I ordered for a sweet lassi and after drinking the lassi I felt energetic. The two friends of mine had their quota of lassi later. 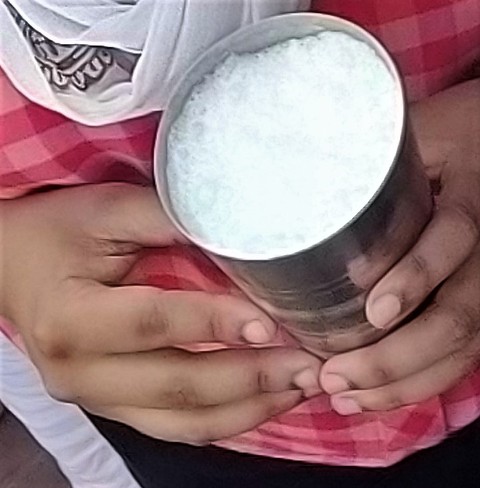 After the fantastic lassi time of mine, we thought to get over with the visit to Jallianwala Bagh – (a major historical place of India). When standing on the only corridor of entry and exit from where Mr General Dyer had given the orders of attack and did not allow the people to leave my emotions were of being sad and angry. Now the place has been beautified with the protected bullet marks in those old walls and the well where so many people jumped and died.

We could now hear our stomachs growl and thus we came out of the Jallianwala Bagh and booked an auto for a whole day. The auto driver promised to take us to the places we wished to.

We headed towards Ravinder Da Dhaba. A very decorative dhaba with an air-conditioner where we had laccha parantha and Chole Bhature.

After satisfying our stomach we headed towards the Durgiana temple of Amritsar which is a temple dedicated to Lord Krishna. After a quick look, we went to see the War Memorial. At this point in time, we were in a hurry as we had not pre-booked tickets for Wagah Border Retreat Parade.

We reached the Attari border entry around 3:30 pm. We entered the place and we asked an army personnel which is the best place to sit and he recommended us to sit extreme left and on the middle rows. It was super-hot and super-dry and thus we decided to sit where we could find some shade. Even though we were dehydrated the experience at Wagah Border was a treat. The enthusiasm of India’s Border Security Force, and them encouraging the spectators was amazing. The retreat parade overall was astounding. It is something which is a lifetime experience which I would recommend everybody to visit. I would also recommend the trip should be done during winters. My visit was a sudden plan. But I regret that I visited during Summers. My next visit cross-fingers would be during the winter months.

After the ceremony, we left the place and reached one of the famous Haveli outlets for an early dinner where we gorged on Amritsari Thali.

We reached our hotel around 9:30 pm and too tired to move. I was regretting that I had caught a cold and had a continuous watery nose. We took rest for an hour and again started getting ready for visiting the temple to see it’s “Golden look”. We packed our bags as we had decided we will leave the hotel and stay at the temple premises till its time for our train.

Around 11: 45 pm we entered the temple premises and the beauty of the Golden Temple at night was incredible. It was a real treat to our eyes. We sat near the Sarovar for 3 hours talking to each other, but we never felt how it was time to leave the temple premises. All of us collected our bags and shoes from the counter and took an auto to the station. We boarded the train for Delhi and reached our destination around 11:00 am.  Tired to heights, but we had a short, sweet, and a memorable trip and promising myself to visit again during winters.

Postgraduate on Gender Studies, Gender Equity Specialist and a traveler Explore, Interact, Engage, with the world around you and beyond. My all time Travel destinations be the Woods and Mountains

I am a newbie to this group and & had a real traveling experience on reading the post\stories by the members. This is my…