Next morning we got up at 5:30AM. After getting ready we checked out of the hotel and went to the bus stand that was right opposite. The Nasik bound bus was not available at that time and we took this opportunity to have tea and some snacks. After some time one bus arrived and we boarded that bus and started our journey towards Nasik. Distance between Nasik and Sangamner is around 70 KM. The road beyond Sangamner is also two lanes but has huge traffic. I was surprised that the highway connecting two major cities of Maharashtra i.e. Pune and Nasik is just two lanes wide. It should it at least four lanes keeping in mind the traffic it has. 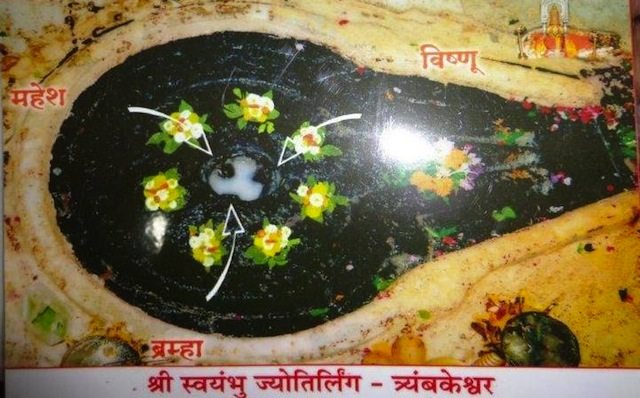 The major town between Nasik and Sangamner is Sinnar which is 30 KM before Nasik. Our bus stopped for 5 minutes at Sinnar bus terminal and again proceeded towards Nasik. From Sinnar one road goes towards Shirdi and from here traffic increased further on the road. It took us more than 2Hrs. to reach Nasik. Nasik has separate bus stand for Trimbakeshwar bound buses known as Trimbakeshwar bus stand. We have already told bus conductor about our plans so he dropped us at appropriate place from where Trimbakeshwar bus stand was not far away. We took the auto and reached there in just 5 minutes. Bus stand is small and buses for Trimbakeshwar are available at regular interval. Condition of buses was not good; it seems that buses retired from long routes were deployed for this route. Since no other option was available, we took one such bus and continued our journey.

There is a mountain named the Brihmagiri Mountain 18 K.M. from the city of Nasik in the Nasik district. This is one of the parts of the Sahayadri Vallies. The city of Trimbakeshwar is located in the bottom of this mountain. This is a beautiful natural place with the cold weather as it is situated 3000 ft. above from the sea. For the visitors coming from the North the Nasik-Trimbakeshwar route is the better one and more comfortable. One can easily get a mode of transport from here every hour. 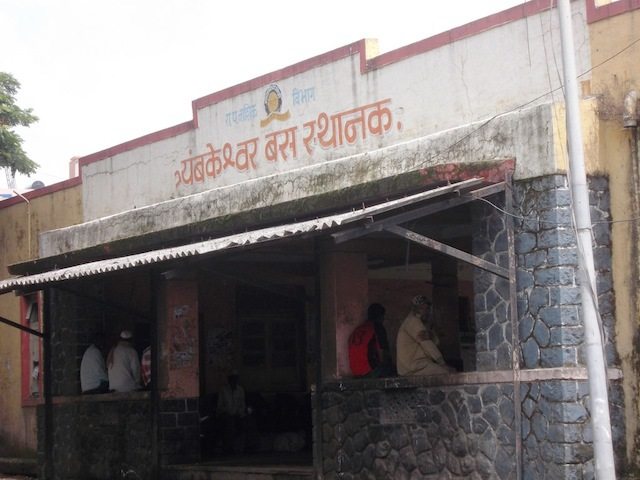 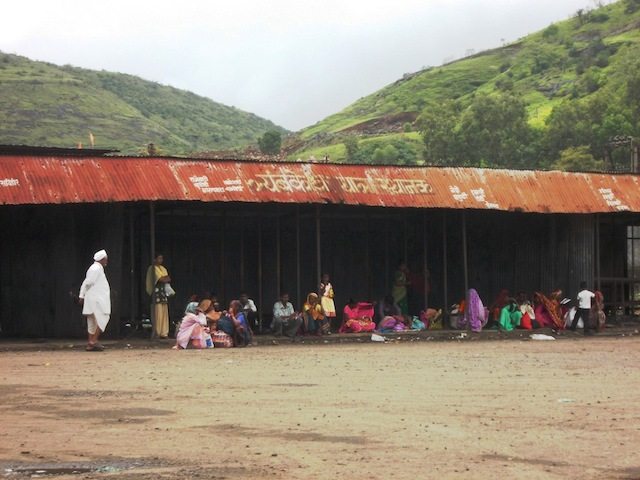 A 28 km journey from pilgrim town Nashik takes a tourist to Trimbakeshwar (or Triyambakeshwar), the 10th sacred Jyotirlinga in the Dwadash Jyotirlinga circuit. The place is memorable due to its picturesque hills, roads and cool breeze. This hill station like place lies in the formidable shadow of Brahmagiri hills in the Sahyadri range and it is the source of holy river Godavari. The place is also known for its Simhastha Kumbha Mela, which comes every 12 years as per the Hindu calendar.

Slow speed of bus remains a concern for us and it took one good hour to cover the distance of Just 28 KMs and finally we reached Trimbakeshwar. Bus stand of Trimbakeshwar was in pathetic condition. There was no proper place for passengers to seat and wait. Even it was very difficult to stand there due to stench. We quickly came out of the bus stand, passed through local market, took left turn and reached in the front of Trimbakeshwar Temple. 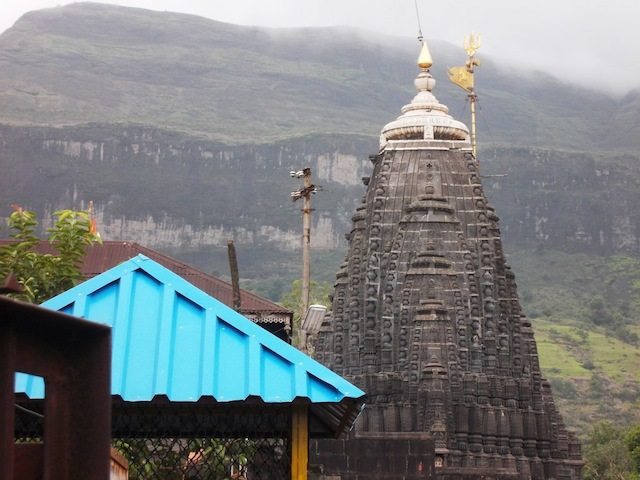 Temple Dome Visible from outside

Market and the surrounding area was crowded with pilgrims. There were many shops selling Puja items and eatables. Many shopkeepers offer cloak room service on charging. We kept our bags in one such shop and entered the premises of Trimbakeshwar Temple without wasting any time. Mobiles, camera and wallets are not allowed inside the temple. 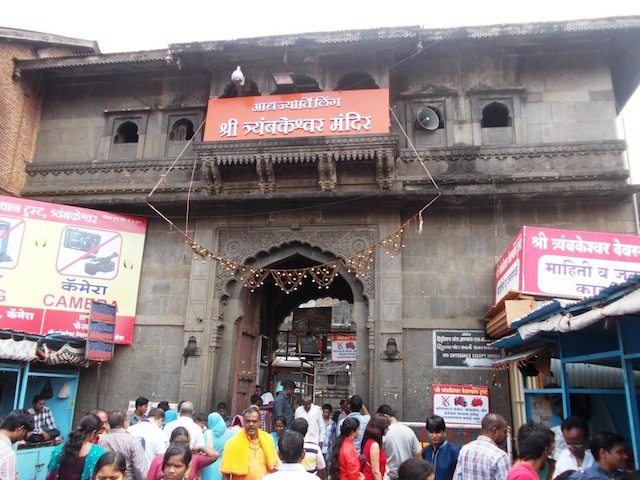 Temple from outside. Small entrance.

Looking from outside, the temple looks like a two story old building. Inside it has a large campus. The present structure of the temple complex was built by Nana Saheb Peshwa during his regime between 1755-1768.Its architecture is shaped mechanically. It is East facing temple and surrounded by four sides with stone walls. Trimbakeshwar temple has 5 domes and each tomb has five golden pots. The flag of the temple is made of the 5 substances.

There is an arrangement for devotees to stand in a queue during darshan time. On the entrance a small temple of Nandi comes first. There is a small hall or sabhamandap to assemble. Here purohits perform different pujas.

As the queue was long, it took one and half hour for darshan. The Garbh grah is below the ground level and one large mirror is kept behind the lingam so that pilgrims can have darshan through reflection. The Trimbakeshwar complex, which is among the 12 Jyotirlingas in India, sees about 40,000 pilgrims daily and the figure scales to about 2-3 lakh during shravan and other auspicious occasions throughout the year. 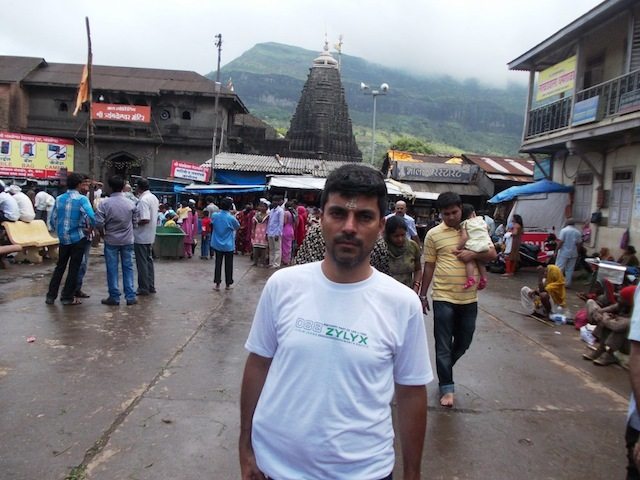 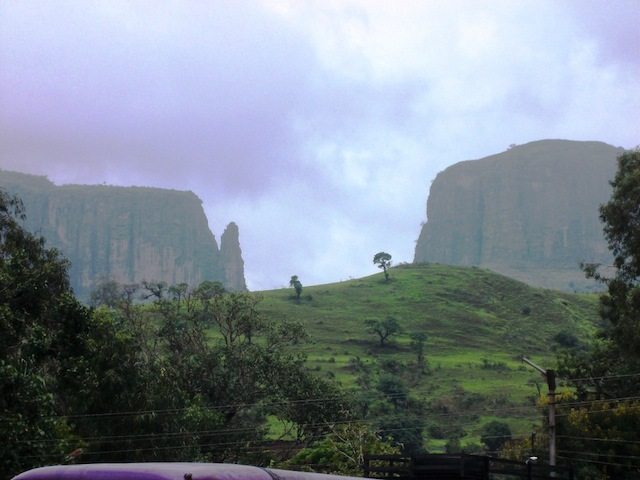 The surroundings on the hills 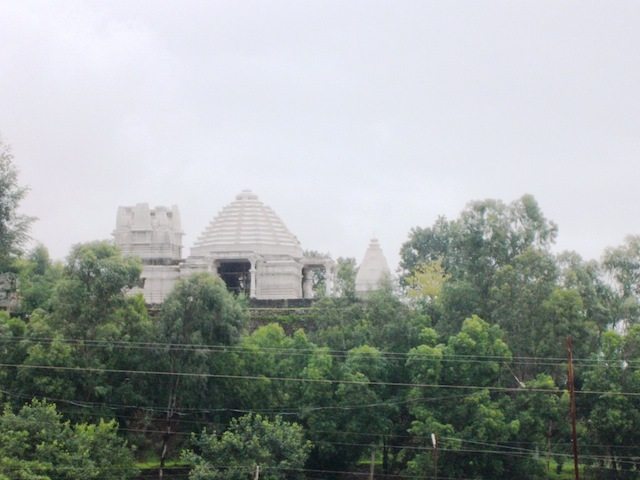 The surroundings on the hills

After Darshan we came out of the temple complex, get our bags back from the cloak room and went to a restaurant for lunch. After lunch we returned to the bus stand and enquired for the Shirdi-bound direct bus. Bus was not available but many private vehicles were available for Shirdi. They were charging Rs. 250 per person on shared basis. When we were negotiating with one driver, a direct bus for Shirdi came. We boarded that bus and left for Shirdi. Bus fare was Rs. 110. Direct bus bypasses the Nasik city and went straight to Shirdi via Sinner. By evening we reached Shirdi. 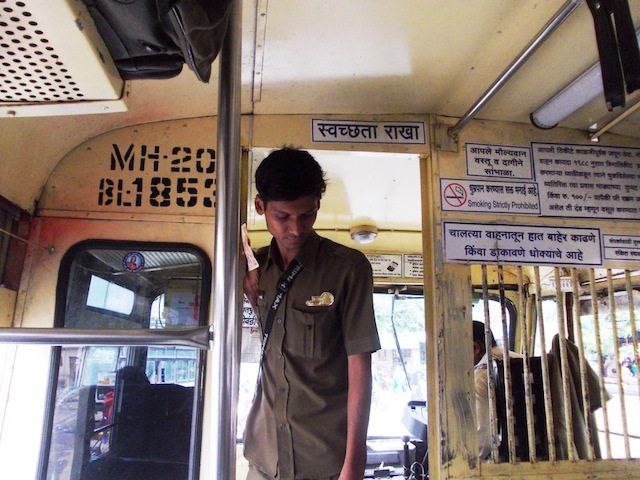 The Legend
There are two stories related to Trimbakeshwar. One story is about Simhastha Parva according to Padma Puran. When Gods were successful in getting nectar by fooling the demons. The demons came to know of this, they launched a violent fight for Amrita kumbh (immortal nectar). In process drops of nectar fell at four places. Trimbakeshwar is one of the four places (Haridwar, Prayag, Ujjain and Trimbakeshwar-Nasik) where drops of heavenly nectar fell. The Kumbh Mela is held once in 12 years in the respective areas.

The other story is equally interesting. Sage Gautam used to live in this area. Once there was severe drought for 24 years. To come to the rescue of people, sage Gautam worshipped Lord Varun (rain god) and the god was pleased. He blessed the sage with the gift of plenty of rains in the area. This made the area lush green and full of water. But this made other sages jealous of Gautam. They sent a cow to destroy the granary of Gautam. When Gautam tried to shoo her away, she was injured and died. Waiting for such an opportunity, other sages charged Gautam of great sin of killing mother cow and made him go for penance. He was asked to worship Lord Shiva and bathe in Ganga.

Gautam appeased Lord Shiva who in turn asked Ganga to come to Gautama’s place. Gautam and Ganga prayed to Lord Shiva to come here with Parvati and stay with them. They made Lord Shiva agree to the request and he decided to settle here. Here the river Ganga appeared in the form of river Godavari. Hence it is also known as Ganga Godavari or Gautami Godavari. People here worship the Godavari as Ganga. Lord Shiva also resides here in the form of Trimbakeshwar.

Trimbakeshwar temple is a religious center having one of the twelve Jyotirlings. What makes the Trimbakeshwar Jyotirlings unique is that it has three faces embodying Lord Brahma, Lord Vishnu & Lord Mahesh (Shiva). All other Jyotirlings have Shiva as the main deity. The temple is known for its appealing architecture and sculpture. Trimbakeshwar Jyotirling is in a small hollow space, which contains a pot of water. Water from the river Godavari constantly pours on the top of linga. Due to excessive use of water, the linga has started to erode. It is said that this erosion symbolizes the eroding nature of human society. The Lingas at Trimbakeshwar are covered by a jeweled crown which is placed over the Gold Mask of Tridev (Brahma Vishnu Mahesh). The crown is said to be from the age of Pandavs and consists of diamonds, emeralds, and many precious stones. The crown is displayed every Monday between 3 to 5PM. The entire black stone temple is known for its appealing architecture and sculpture and is at the foothills of a mountain called Brahmagiri. Three sources of the Godavari originate from the Brahmagiri Mountain. 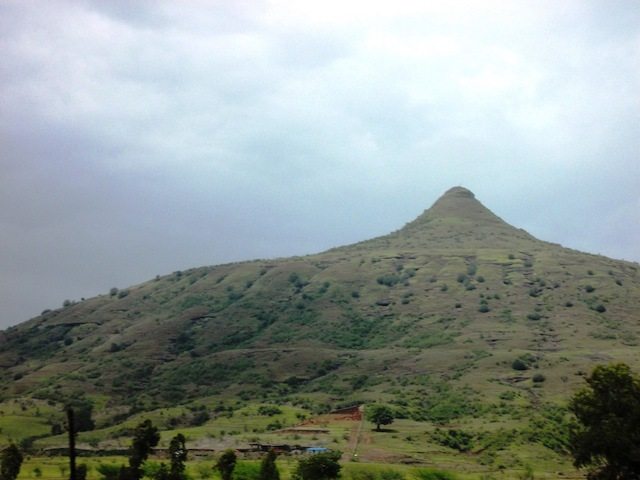 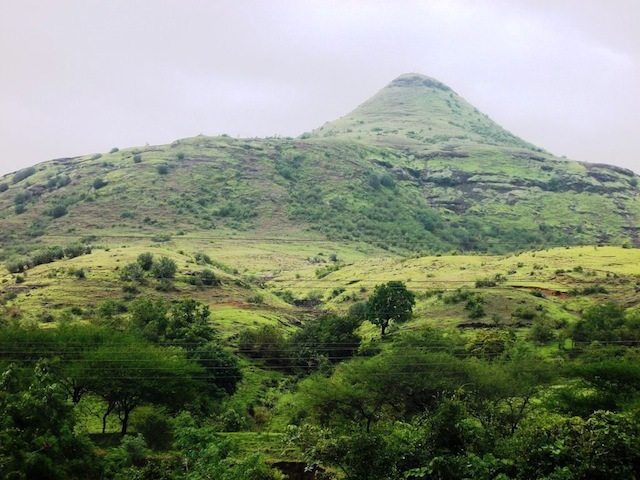 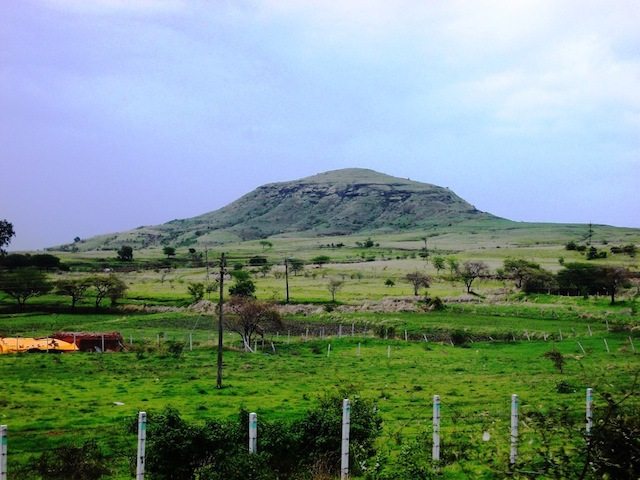 Temple timings and related information
Temple is managed by Shri Trimbakeshwar Jyotirlinga Trust. However, pujas are controlled by purohits .There are three main pujas performed every day. Pujas are between 7 to 9 am, noon puja at 1 pm and sayam puja between 7 to 9 pm. During the night worship, sheja arti is carried out and a silver mask placed on a bed in a hall of mirrors. Every Monday between 3:30 and 5 pm, a palki (palanquin) carries the silver panch mukhi mukhota (five faced image of Lord Trimbakeshwar) from the temple complex to nearby Kushavrata Tirtha and back. An abhishek is performed there. The palki processions carry a golden crown during Shivaratri, Kartik Purnima and Dussehra. The special golden crown of the Lord donated by the Peshwas is also shown to devotees once a week on every Monday at 4:30 pm. 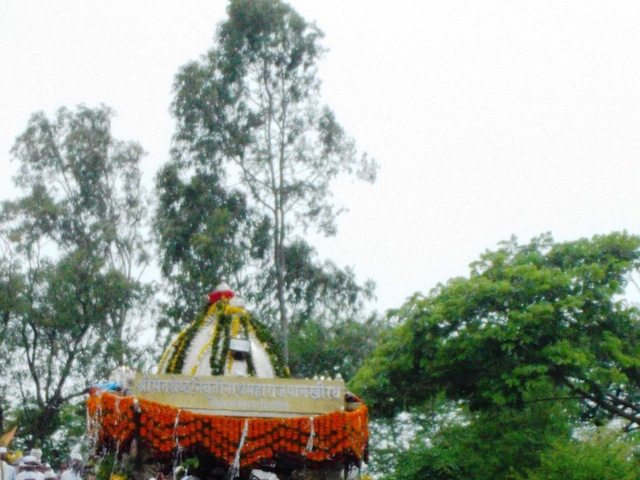 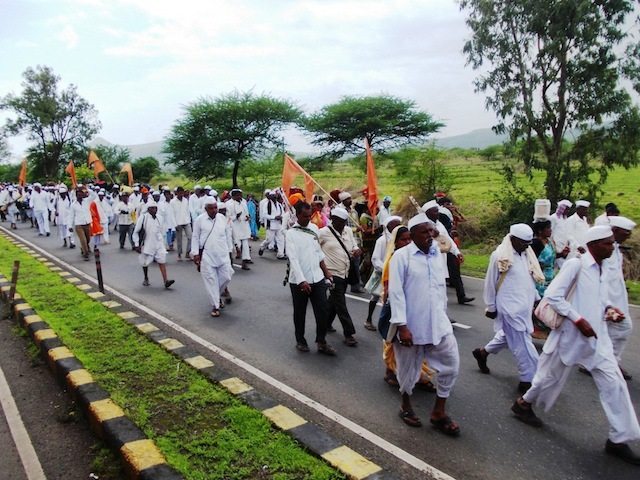 Getting there and around:
By Air: Nearest Domestic airport is at Nasik 31 kms .Another nearest airport from Trimbakeshwar is at Mumbai, which is about 200 km away from the holy city. Taxi services are available from Mumbai airport to Trimbakeshwar.

By Rail: Nearest railhead is at Nasik. It is one the major railway stations connected to all major cities in India. One can get enough convenient trains from Nasik to other cities.

By Road: Trimbakeshwar is connected by bus services run by Maharashtra road Transport Corporation. There are many private luxury buses and taxis available from Mumbai and Pune to Nasik.

Accomodation
There are good hotels, guest houses and dharmashalas in Trimbakeshwar town. Normally they charge between Rs.200 to Rs.1000. Yatri Niwas run by Trimbakeshwar trust is also a good option to stay.

In the next post, I will take you to Shirdi for Sai Darshan, till then Jai Bhole ki..

Who has not heard of Rani Lakshmibai of Jhansi? The last few lines of one of the most recited poetry in Hindi literature composed…