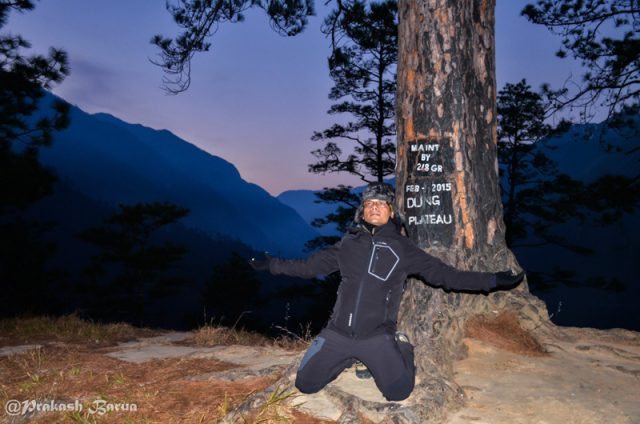 Sun rises in the East. Nothing is new about it. Both you and I know that. But my quest to know about the place where Sun rises first in my country led me to the fact that it’s in Arunachal Pradesh, the land of rising sun. But it can’t happen in whole Arunachal Pradesh at the same hour.

Then which is that place in Arunachal Pradesh where hit the first rays of sun in India?

Dong in Arunachal Pradesh, in the easternmost place in India, receives the first rays of sun in India.  It was so discovered in the year 1999. The newspapers carried this report which was further confirmed by the scientists and Survey of India officials. It then prompted a rush of visitors to this remote place in the millennium year 2000 and now this place is known as sunrise village.

So in the Christmas of 2015, when most of my friends were busy enjoying parties, I along with a lively bunch of friends, set off the journey to experience the unique feeling of catching the first rays of sun before anyone in the country. 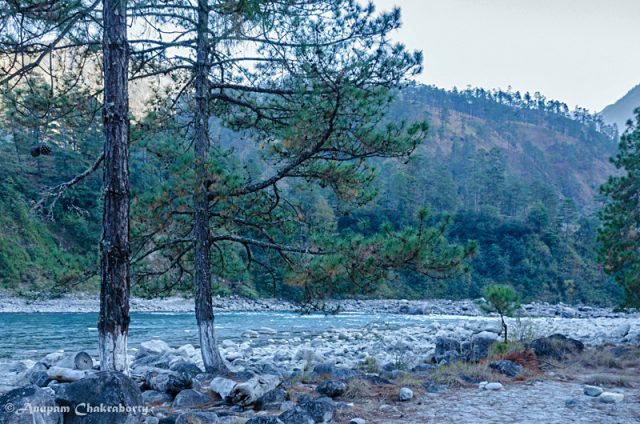 Dong is a small pristine plateau near Walong in Anjaw district of Arunachal Pradesh. There is no motorable road to Dong and no one lives there now. Earlier, below the Dong plateau, there was a village consists of three households. But due to scarcity of water all of them have shifted to a nearby village called ‘Subkung’. Dong Plateau can be reached only after a 90 minutes climb from the military base of Walong.

We stayed at Walong the previous night and in that evening we made a little recce of the  base for hiking. The hiking to Dong starts from the place where locates a small hot spring by the bank of river Lohit. There, we met our guide Amit Meyor who agreed to take us to the millennium sunrise point for a price of Rs.1500/-. 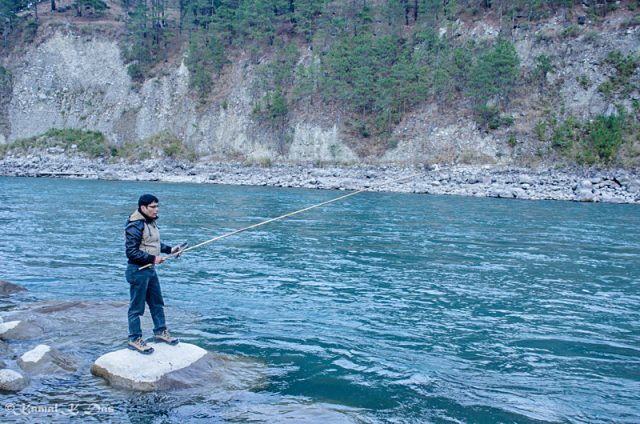 During our recce, we did angling too in the river Lohit

I am not a crazy fan of hiking at night. But you would never be able to catch the first rays of sun unless you hike at night, especially when camping at Dong is not possible. So we had no choice but to hike in the darkness of night.

Our journey started at 3am. We drove from the Inspection Bungalow to the starting point of hiking. Accompanied by guide, Amit Meyor, we set off on an unfamiliar trail. Each of us was carrying torch light, but later, I realised that head lamp would have been much better on such a trail. Within a few minutes, we were on a suspension bridge. It was a complete dark outside and we could barely see anything without a torch light. The first thrill of the trail showed off right on the suspension bridge. Before I could realize anything, everyone in the front switched to sideways walking. Immediately I felt that the bridge slanted and started swaying to make straight walking very difficult. Holding on to the sides and pulling along we kept walking carefully. The enthralment was for sure no less than of any adventure movie. Eventually we reached the other side. 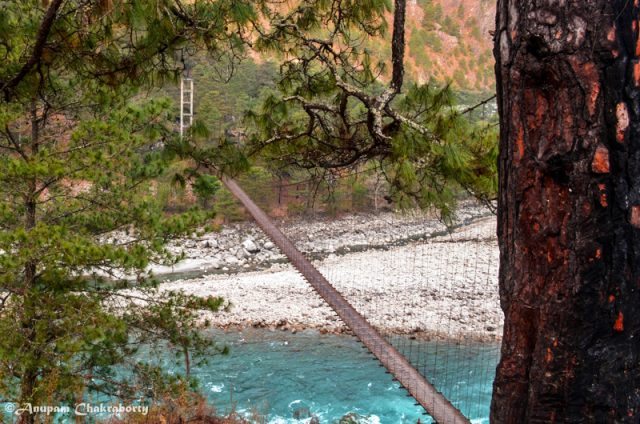 We kept walking and reached near the village Subkung. From here, another guide joined us. We then started hiking through the dense forest with one guide in the front and the other following us. It was entirely a new world around us. In the woods at night, there were different sounds. It smelled differently. And we knew there are animals that only come out at night.

On the night trail to Dong. From the right my friend Prakash, Chandra and myself

Though we had a previous experience of trekking at night but that was under lots of lights, on a well paved road and along with so many people around us, to the shrine of Mata Vaishno Devi at Katra. But the night trail to Dong plateau was different. In subzero temperature of night, we have already challenged ourselves to experience the extreme. But, after we were in the dark for a while, our eyes began to adjust. We felt that it’s rarely ever completely dark and we started seeing quite well. The night sky became an interesting subject to watch as moon was still looming large over the mountain peaks. My sense organ became sharper and I started listening more closely. I realised that it was the experience I won’t forget soon. So I let my sense of wonder to take over. 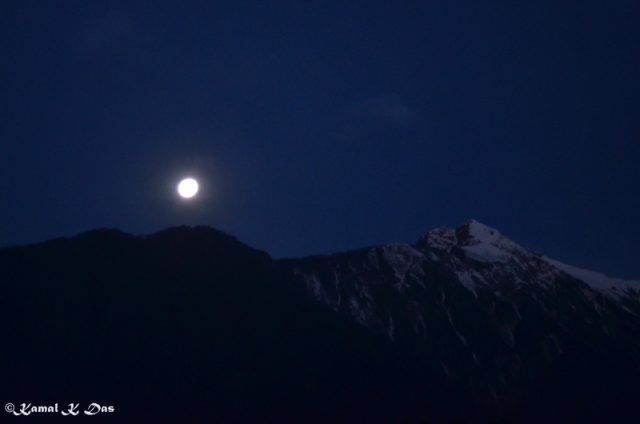 As I wrote above that there are animals that only come out at night, in this night trail also, we had a fear of those animals. The little I knew was that bear has excellent night vision and they are particularly attuned to detecting movements. And I think that was enough to get scared. So I asked one of the guides, “What if a bear comes out now?” Laughing loudly he replied, “How bear can kill us when we kill and eat them?” We all had a good laugh and then continued to hike.  After walking for about 1 and ½ hours we reached upper Dong plateau, the land where hit the first rays of sun in India. 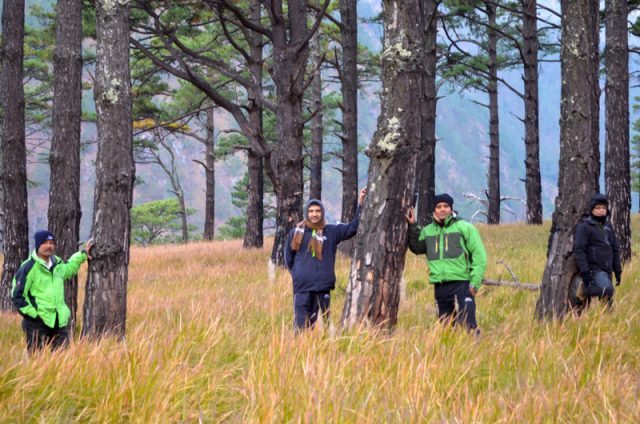 We the four at Dong Plateau.

The sun began to rise, though not in a spectacular way, but it started illuminating the place. We saw the dark night before sunrise and now with the illumination, light began to pierce through the darkness. Like every other day, sun rays did hit the plateau of Dong before any other place in India and we were the few to witness it. 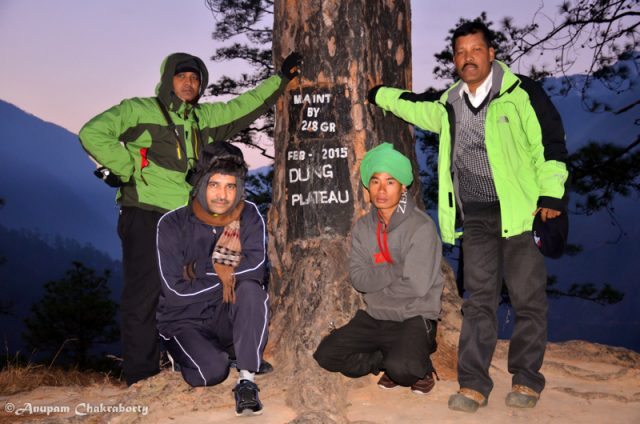 My friends on the Dong Plateau at sunrise. From Left Kamal, Chandra, guide Amit and Prakash

It was a special moment for each of us and an experience to cherish for long. There would be many sunrises and on many such occasions we will be standing somewhere in the corner to watch it, but every time we do that we would be remembering this moment of our life at Dong. It was so special, very, very special. 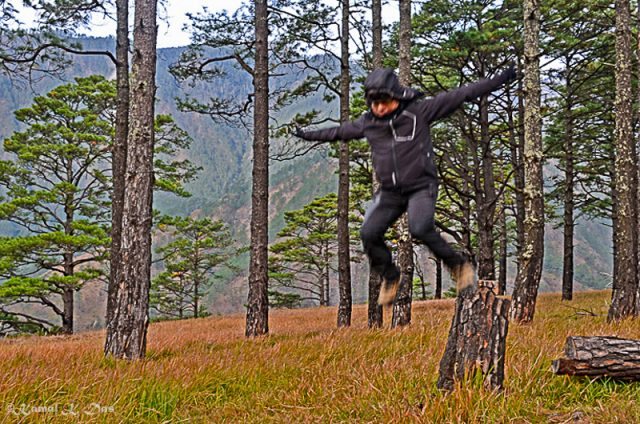 Well, it was out of sheer joy. 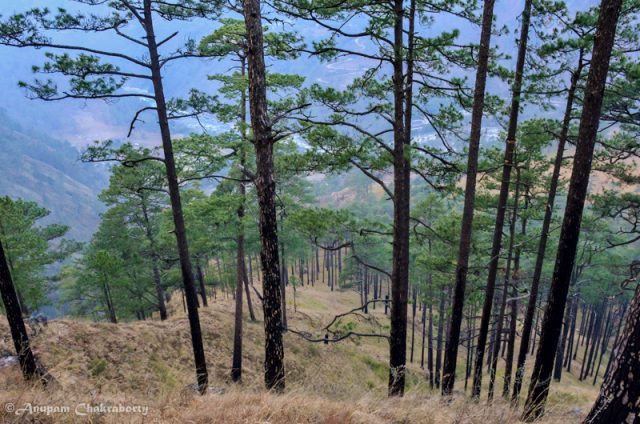 Looking down to the trail we hiked at night 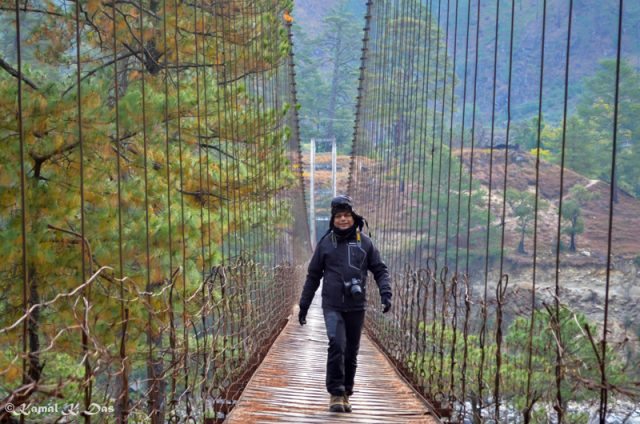 In case you find this night trail interesting and wish to catch the first rays of sun, here are some facts that may help you.

1. The nearest Railhead to Walong is Tinsukia/New Tinsukia (in Assam) which is situated at a distance of 345 Km and you can cover it by road in two days.

2. The nearest Airport is Dibrugarh which is situated at a distance of 385 km.

3. At Walong, ask for the spot of hot spring which is located on the bank of river Lohit. Just before the downhill to hot spring, there are two shops where you may enquire for the guide Tinka Meyor. She is more popular. She is available at +91-9191626330 though mobile phone network is very, very weak at Walong. You may also ask for the guide Amit Meyor (we hired his service) who is available at +91-9436611535.

Dong – Where Hit the First Rays of Sun in India was last modified: October 18th, 2018 by Anupam Chakraborty

Me and My cousin Gaurav decided to take this unusual route on a week long trip and cover these many hillstation in one go.Best…