Mythological Significance
Let us have a snapshot view of Hindu mythology to understand the significance of Sagar. Kapil muni, an incarnation of lord Vishnu, was the son of Kardam rishi and Devahooti. Once, when he was meditating in his ashram, 60,000 sons of Emperor Sagar (of his wife Sumati) reached there in search of the lost horse meant for Ashvamedha sacrifice. The horse was secretly kept there by lord Indra, which fact was unknown to both Kapil muni and the sons of Emperor Sagar. They found out the horse over there and thought it to have been stolen by Kapil muni. They started to disturb and disregard the meditating muni, which made him greatly annoyed. So he burnt all the 60,000 sons of Sagar to ashes by his wrath and sent their soul to hell. Later on, Bhagirath, the great grandson of Emperor Sagar, wanted to perform shraddh of his ancestors in order to help them to attain moksha. But, as Agastya muni drank all the water in the sea, shraddh ceremony could not be held. Through deep prayer, Bhagirath satisfied lord Shiva to release river Ganga from heaven to the labyrinth of his hair and from there to be fallen on earth. That is why lord Shiva is also called Gangadhar and Bhagirath is known to have brought Ganga maiya on earth. With Ganga jal (water of river Ganga) shraddh of 60,000 deceased sons of Emperor Sagar could be performed, their souls were freed and ascended to heaven by attaining moksha. However, Ganga maiya, by all her kindness, stayed back on earth. The confluence of river Ganga with sagar is called Ganga sagar, where temple of Kapil muni is situated.

Our visit continued
Once we reached Sagar beach, we decided to have the holy bath first. Though it was the 10th of January, the very first day of Sagar mela for this year, but we found many pilgrims already arrived from different parts of India. After having the bath, we felt fresh and rejuvenated and our fatigue was vanished. Then we started to roam about in the fair. Since the area was a coastal one, the surface was full of silver sand. The life of the fair is a unique one. People from different cross sections of the society and people who normally do not belong to our recognised definition of society, do assimilate here to make a colourful conglomeration. I saw most of the pilgrims were from Bihar, Uttar Pradesh, Jharkhand and Odihsa. Participation of Bengalis was less as compared to them. Devotees from other states were also not so significant in number. 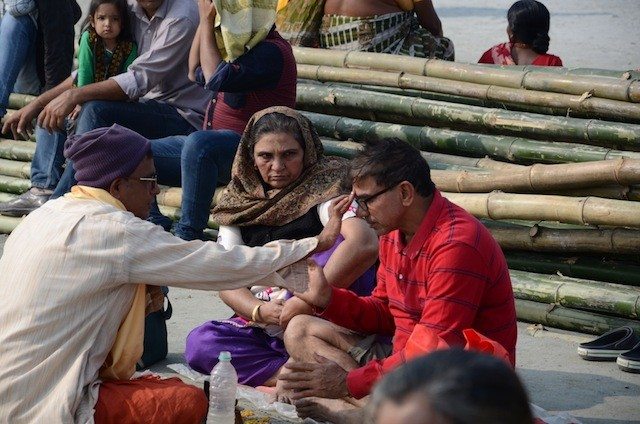 Many priests (pandit ji) were available to offer their portfolio of services. When some priests were helping pilgrims to do shraddh ceremony of the ancestors, some others were doing puja rituals with go-daan (donating the holy cow). The same cow was donated several times by different pilgrims. The cow did not have an opportunity to know, how it contributed to national economy. 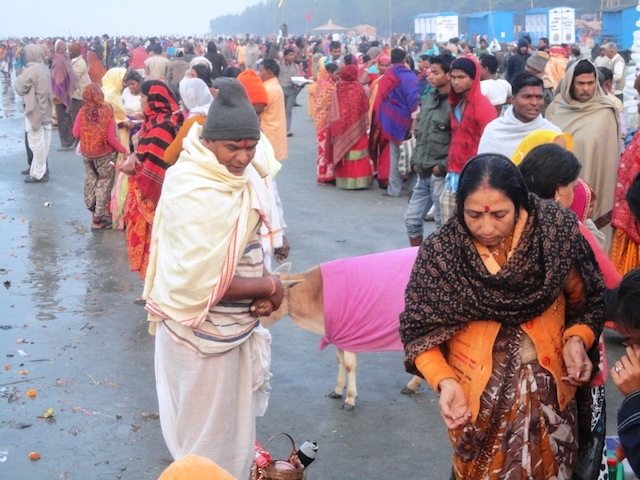 Some family groups were doing Ganga puja without taking any help of any Pandit ji. It was done mostly by lady members of a family with participation of a solo male member. By standing just at the point, where sea waves reached their feet, they first drew a figure on the beach, then they offered a combination of flowers, incense sticks and lamp to Ganga maiya. Repeatedly they were doing this ritual which gave an opportunity to the photographers to capture the event. As a contrast to this, I saw many male members preferred to perform puja by standing alone in waist deep water facing the sun. What I realized that puja rituals are man-made, so they are always flexible at the hand of the devotees. 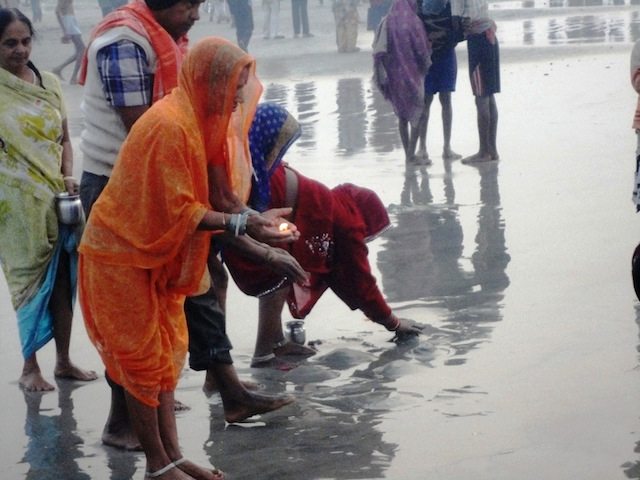 A solitary man doing puja in his own way

There were many rich pilgrims, who were donating a lot of items to the priest. It would have been a more satisfying scene, had the items been offered to the really needy or deprived members of the society. As a mathematical expression, I believe that exhibition of wealth does not necessarily vary directly with degree of devotion. 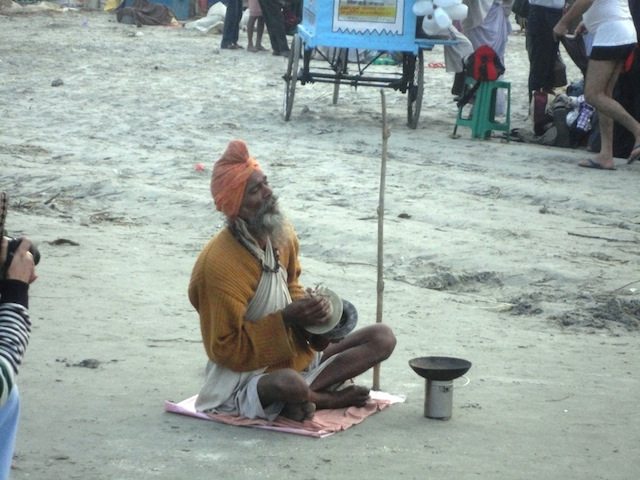 A singer singing devotional song sitting alone. Many such singers are more apt than their commercial counterparts

I noticed a devotional singer, who was sitting alone and was singing from his heart, while keeping his eyes closed. He was so immersed in singing that the disturbance prevailed around could not even touch him. 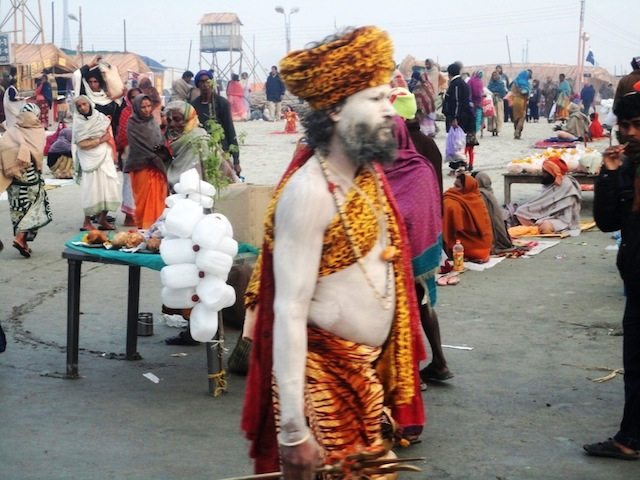 Sadhu travelling through the fair

There were many sadhus (monks) walking in the fair, who smeared their bare body with white ash. Naga (or nanga) sadhus were not visible in the fair area, though I visited their hutted accommodations later on. 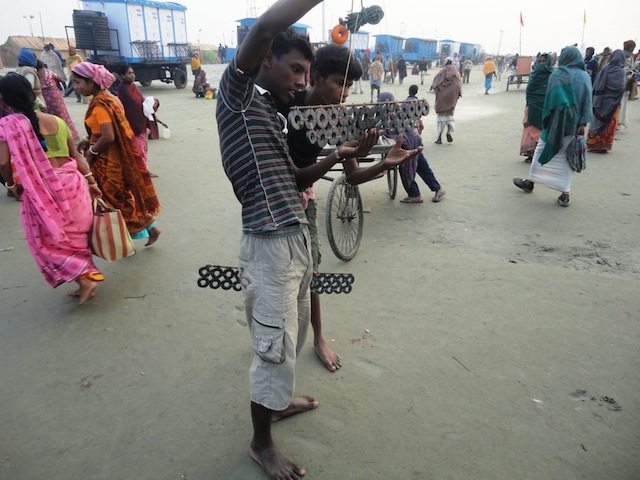 I observed a peculiar practice along the sea line. We saw devotees to throw coins to the sea (to the reason best known to them) at the time of taking holy dip. Some boys were collecting those coins from inside the sea water with the help of magnets. They fixed many circular shaped magnets together and searched the coins continuously in the knee deep water. At most of the time, they were successful. 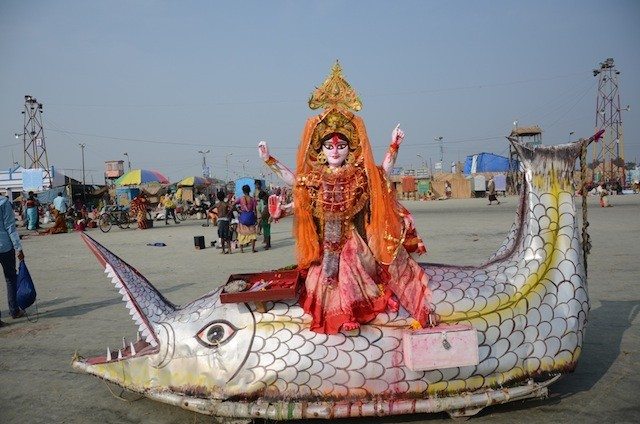 Jai Ganga Maiyya – Idol of the Goddess placed in the fair 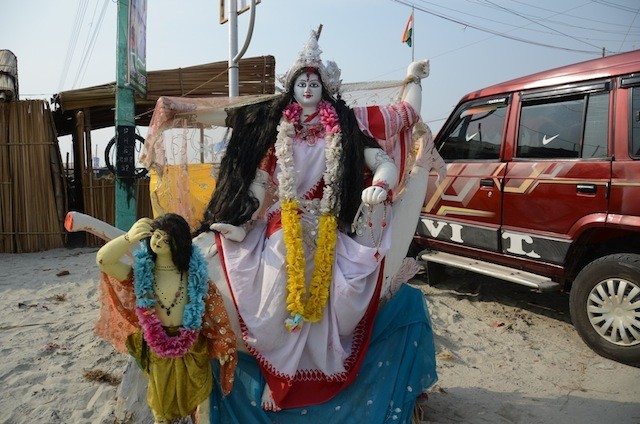 Idol of another Goddess graced the surrounding

We are aware that Bengali idol makers are great clay artists. They make beautiful idols of Durga mata, Kali mata etc. In Sagar mela also, several idols of Ganga maiya and other Gods / Goddesses were placed at various locations made by the clay artists. Alongwith the idols, availability of a donation box was a must.

Thousands of people were roaming around, but the level of cleanliness was appreciable. We noticed many volunteers wearing easily identifiable bright coloured jackets were searching for waste items. Plenty of yellow coloured big sized litter drums were placed here and there to accommodate waste material. An old proverb resurfaced in my mind – cleanliness is godliness.

Arrangement of general illumination system was good. Though it was day time, but many high mast lighting poles and sodium vapour lamp poles were seen abundant in number. Multilingual announcements were continuously going on in public address system to guide the pilgrims. 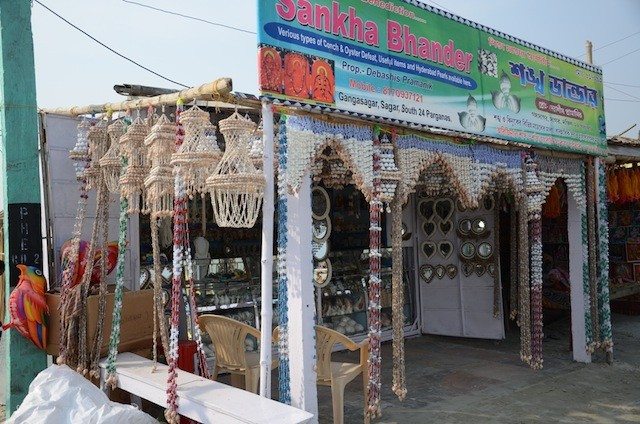 A shop only for bivalve mollusk, cockles etc

After covering the sea beach, we moved to the shopping area. There were numerous temporary shops offering almost everything. Apart from general items what we used to see in all the fares like puja items, utensils, photos of Hindu Gods / Goddesses, dress materials, gift shops etc., this fare housed some locally available / made items like blowable conchs, gift items made of bivalve mollusk etc. Lamp sheds, curtains made of oyster, cockles (seep in Hindi) were a class of their own. So far banking is concerned, there was an SBI ATM to help out the cash seekers. 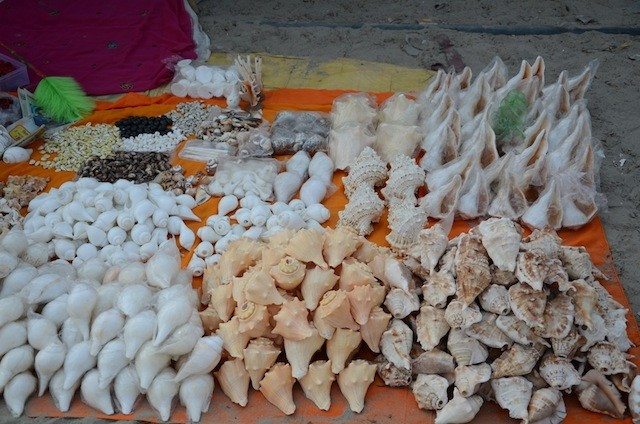 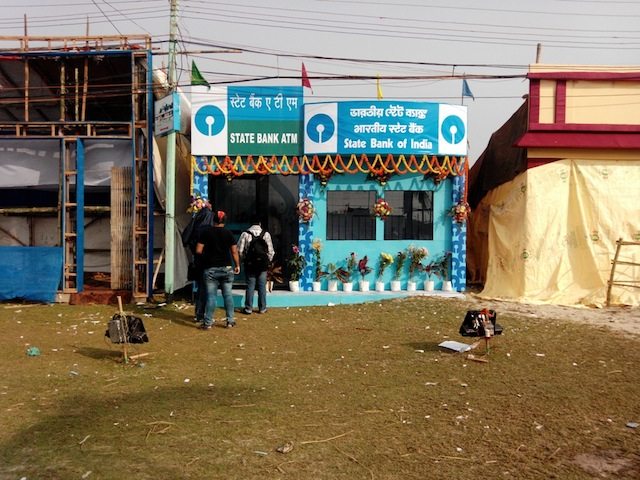 The SBI ATM. This item can be found anywhere and everywhere

We smelt frying of samosas somewhere nearby, but restrained ourselves. We were determined that only after visiting the Kapil muni temple we will take food. 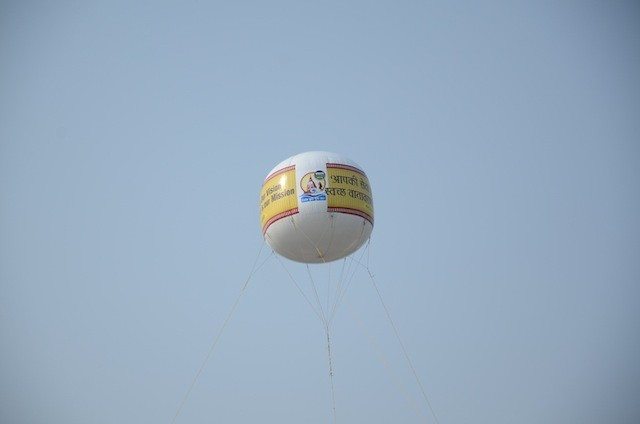 Slowly we approached towards the temple. Hundreds of pilgrims were also heading towards the same direction. As we entered into the mainland area, we noticed that a big balloon was flying high with a request printed on its spherical surface to maintain cleanliness of the fair. It’s a good concept, because cleanliness is not a job of any single individual, rather it should be inculcated into everybody’s habit. 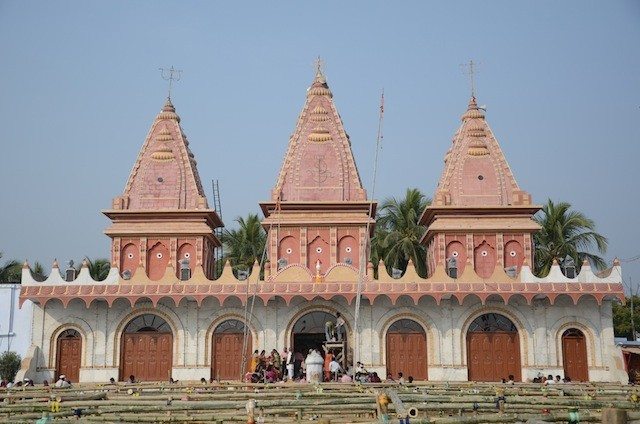 The all famous temple of Kapil Muni

Then we reached the temple of Kapil muni after crossing bamboo barricades. The present temple of Kapil muni is a modern one, consecrated in 1973. Three previous temples were washed away by sea tides and typhoon. In fact the present one is also not far away from the coast. The temple has been designed to be a very simple civil structure. It is in fact a medium sized single hall. The length of the temple is parallel to the adjoining road. At the top, there were three distinct pyramids, coloured in saffron. Inside the temple hall, idols of Gods and Goddesses were arranged on one side, one by one, serially. Apart from idols of Ganga maiya, Kapil muni and Emperor Sagar, there were idols of many other Gods / Goddesses and mythological characters like Narsingh avatar, Krishna ji-Radha ji, Sankatmochan Hanuman ji, Ram ji-Sita maiya, Har-Parvati (with little Ganesh ji in between), Vishalakshi vanadevi, Kali mata ji, Devraj Indra etc. Photography was not prohibited anywhere. The hall was adequately illuminated and ventilated, so that none of the pilgrims was uncomfortable. 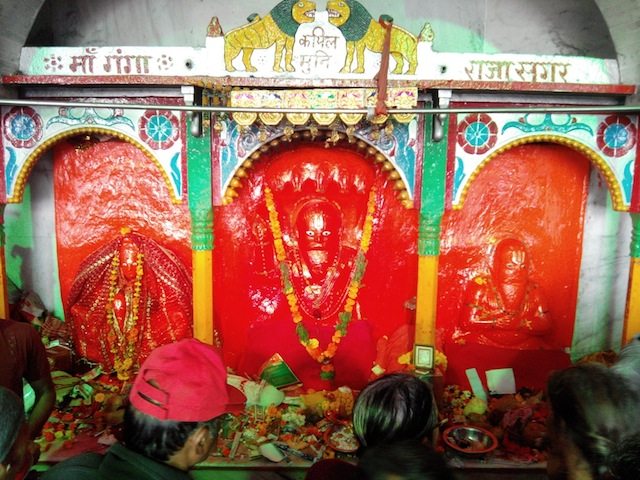 Close view of the idols of Ganga Maiya, Kapil Muni and Emperor Sagar inside the temple 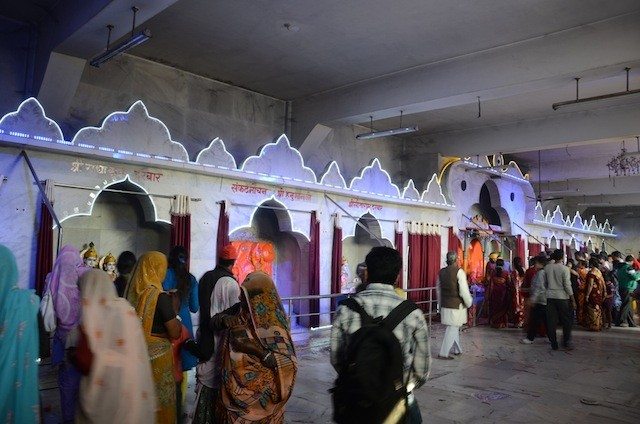 Inside view of the temple showing arrangement of idols

After visiting the temple, we proceeded towards hutted accommodations of ever mysterious Naga (or nanga) sadhus.

Contd. to the next & last part.

The legend of Ganga Sagar – How the holy river meets the vast sea was last modified: March 31st, 2022 by SANTANU

robably, resort people could identify our intentions of sitting there. They managed to arrange some comfortable chairs for us & also offered Hukka. Some of us enjoyed Hukka, sitting below the crystal clear sky with lot of stars visible. It is not possible for we Delhites to witness such a beauty of stars now in our city, as Delhi atmosphere is too polluted.