Akhara of the Naga Sadhus
After visiting the Kapil Muni temple, we headed for the akharas of Naga Sadhus. On the right side of the Kapil Muni temple, there were elevated array of galleries of Naga sadhus. It was a long, continuous gallery, where separate akharas were made one by one for the sadhus. As they are well known for, all the sadhus found sitting over there naked, their bodies smeared with white ash. People (mostly middle aged / aged ladies) were reaching to their feet to seek blessings. I have clicked some photos of the sadhus, keeping in mind the aspect of decency. 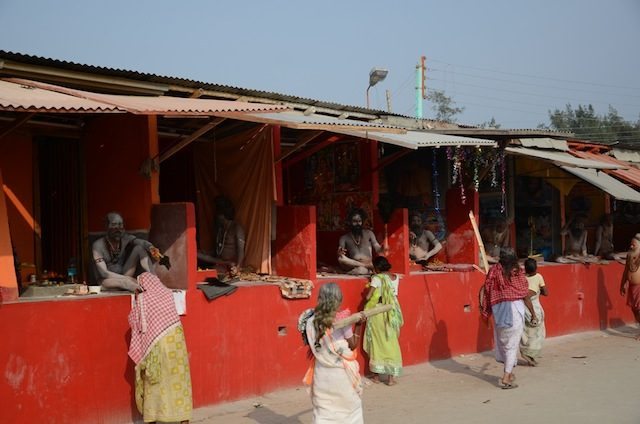 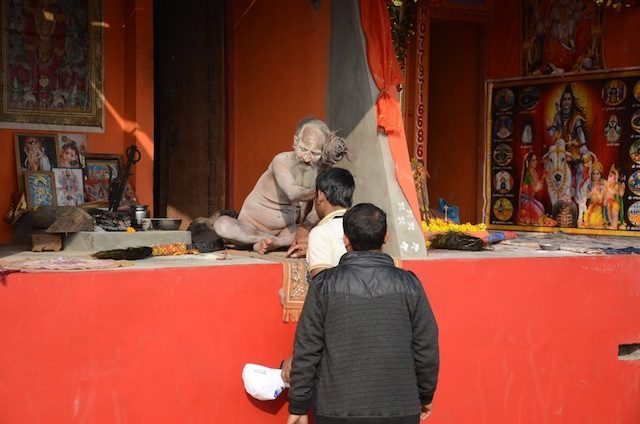 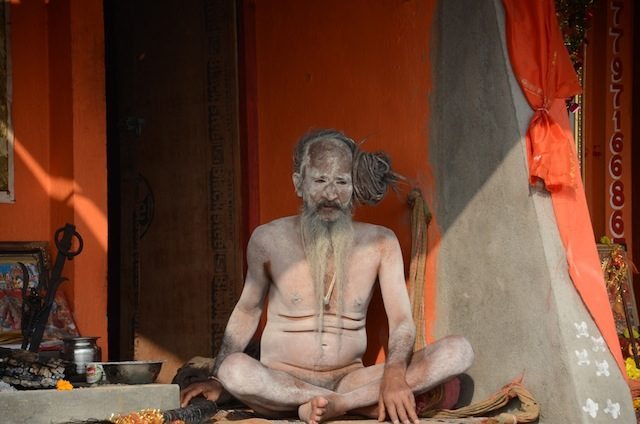 A close view of a Naga Sadhu

After visiting akhara of the sadhus, we went for lunch. It was much delayed lunch obviously, as the clock already crossed 3 pm. In one hutment type local restaurant, we got rice, dal and sabji. We had it all at one go, as hunger overwhelmed our test buds. 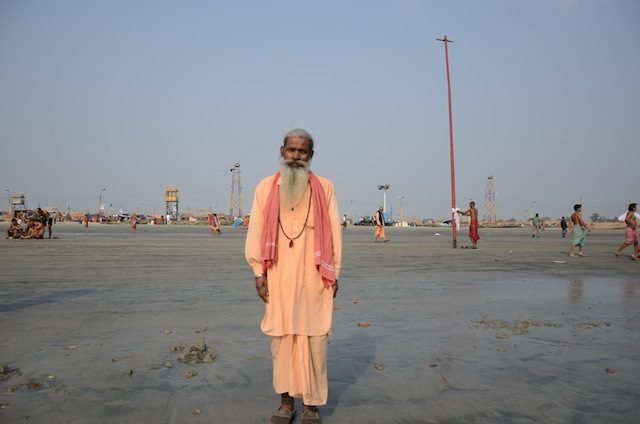 A religious man roaming alone in the beach 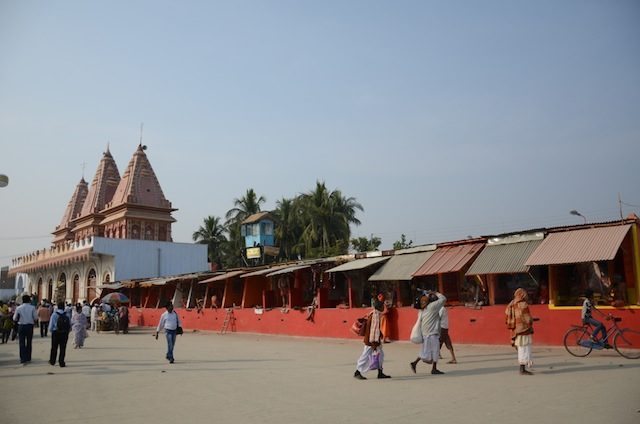 After another visit through the fair area, we enquired about return vehicles. We reached the bus stand-cum-vehicle terminus, which was located nearby. Local people told us that low tide was going on, which restricted movement of vessels. Some of them advised us to go to Benuban jetty, instead of Kachuberia jetty. Benuban jetty, situated by a creek, is much nearer to Kapil Muni temple, as compared to Kachuberia. Vessels can operate from that jetty during low tide also. So we proceeded towards Benuban in a Mahindra Maxo. It was a 20 minute’s journey. But the area where vehicles terminate their journey was far away from the jetty point. We had to walk for more than 10 minutes in moderate speed to reach the jetty. Pilgrims with luggage and accompanied by elderly persons found it difficult to walk this stretch. After reaching the jetty point we saw that a vessel was waiting for us. But it got stuck with the muddy surface of the creek, as low tide was still continuing. We waited till high tide came, then it started its return journey. It was already 5.20 pm and dusk had set in.

Myself with Swaraj before leaving the Sagar beach and mela ground

The Benuban jetty, where the vessel got stuck with muddy surface 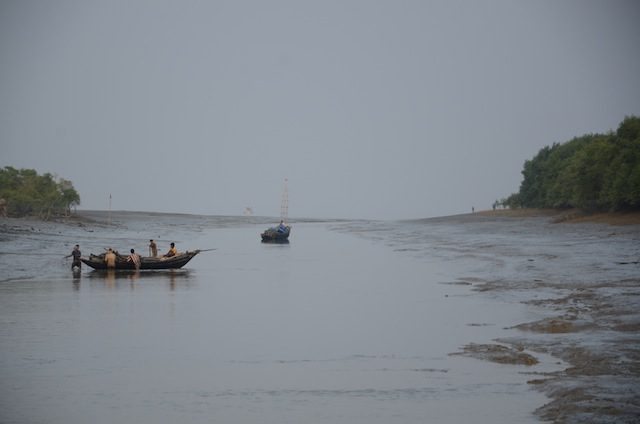 Bye bye Sagar island. Journey towards Namkhana started in the twilight of the dusk

The Return Journey From Benuban To Namkhana
This part of the journey was most memorable. Almost all of the passengers sat in the lower deck, as per system, whereas some unorthodox few, including me preferred the upper deck. The vessel staff tried their level best to resist us but we were adamant and were successful in persuading them. There was no seat on the upper deck, so we sat on the wooden surface. Right from start, the return journey proceeded through darkness. Very soon the faint evening glow, which was prevalent in the sky, vanished. The vessel did not have any light in the upper deck area. All the lights we had, was only the cosmic glow in the sky. I could not see anything ahead. The person sitting next to me was a mere silhouette. Up above there were innumerable stars and glowing planets travelling with us and below there was infinite quantum of water through which we were moving. Only God knew how the driver of the vessel was operating it and navigating through asphalt thick darkness. It was merely on the experience of the man on which lives of all the passengers were dependent. On way we saw glimpses of glowing horizon here and there, which were in fact remotely placed towns. The journey was quite adventurous to me. It was absolutely risky and uncertain – at least for me. But for the grey haired driver, it was a usual one. He was confident enough to handle the situation. Only when some of us were trying to activate mobile phone, he got irritated. The glow of mobile screen was disturbing the consistency of darkness, which was making the situation difficult for him. I was watching the Ursa Major (Saptarshi Mandala), the Pole Star etc. and was thinking how miniscule we were in front of the universe. The beauty of the night journey made me humbled and speechless. The night sky appeared like a beautiful lady wore an elegant stole fitted with dazzling diamonds and precious stones. After nearly one hour, the dashing sound of the water started to recede. Sparkle of bright stars surrendered before artificial search lights and high mast illumination system. Tension of all the passengers came to an end. We arrived at Namkhana jetty. [Fare from Benuban to Namkhana was Rs.75/- per head]. This unique journey through the starry night brought alive my memory of trip to the Sunderban islands once again.

After getting down at Namkhana, we could not find any van or rickshaw. So we had to walk. First we had hot tea at a roadside stall and then we started brisk walking. A 30 minute’s walking got us to Namkhana railway station. A Sealdah bound local train was waiting. By grace of God, as soon as we boarded the train, within just 5 minutes it started its journey towards Sealdah. Fare was only Rs.25/- per head. The return journey was comfortable and peaceful. It took more than two and a half hour to reach Jadavpur, where I got down. Swaraj continued the train journey.

Concluding The Trip
Our trip to Ganga Sagar was a memorable one. This was my 3rd trip to the Sagar island and my second trip during Sagar mela. Recently I came to know that WB Govt has a proposal to construct a bridge over Muriganga river. If it comes true, it will be a boon to the tourists. People can go the Sagar beach by vehicle straight from Kolkata without making any transhipment midway. At present there is dearth of hotel / accommodation in Sagar island. Bharat Sevashram Sangha has a huge building over there, where you can put up if recommended by any of their branch / office. Youth Hostel of Govt of WB also has infrastructural facility, where staying requires consent of appropriate authority. However, during mela time, several NGOs put up langars on temporary basis.

We will remember Gangasagar not only for its mythological importance, but also its linkage to literature. It finds its mention in various works of literature including the ones authored by Tagore and Bankim Chandar Chatterjee. Even the Ramayana and the Mahabharata have mentions of Gangasagar.

In 1978, a Hindi movie was made named Ganga Sagar, directed by Ashish Kumar, in which star cast included Abhi Bhattacharya, Bela Bose, Trilok Kapoor, Ashish Kumar, Lalita Power and others.

We can hope that the day is not very far off when it will be connected by road and railway, considering the pace at which our infrastructure is progressing. It is already connected by helicopter from Kolkata during mela time. But before that I am sure that Ghumakkar.com will see many more travelogues on Ganga Sagar mela. 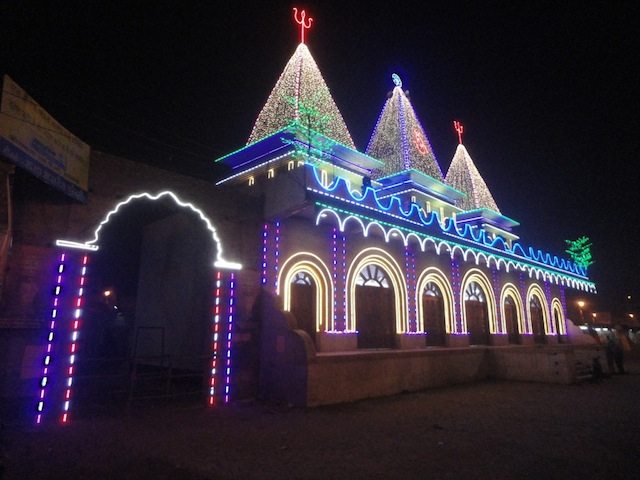 Kapil Muni temple by night. I took this photo during my visit to the Sagar Mela in 2014

Ample parking space, well maintained gardens and clean room with white crisp sheets have already won our hearts but it was dark by the…