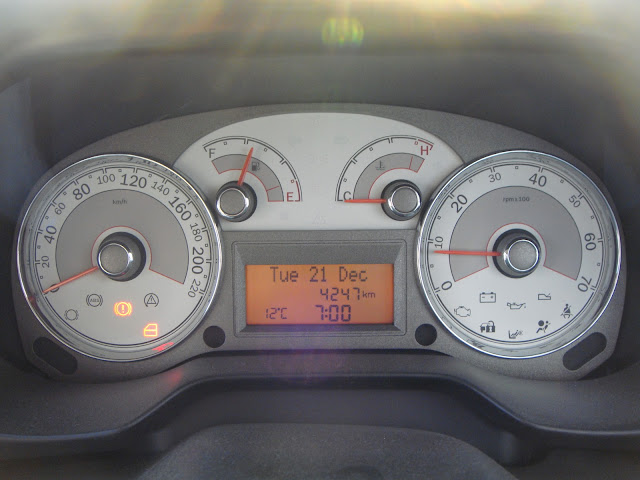 By 5.40 A.M, the 2 kids & we were already up taking hot water bath, I had been down at the parking and gave my LINEA a clean neat wash. The temperature outside was very cold & water was very chill, some how I did not feel it all that bad. The watchman was looking as if I had lost my mind considering that he was wearing a sweater and gloves feeling very cold outside. The car was now fully washed & cleaned for another sortie. Jamuna also lent me a helping hand later and in the process cursing me for delaying the start. Some how I find it difficult to keep the car dirty. I like my cars to be neat & clean always.

Took some nice picture of the rising sun at 6.35 A.M. morning against a background of a Transmission Tower. 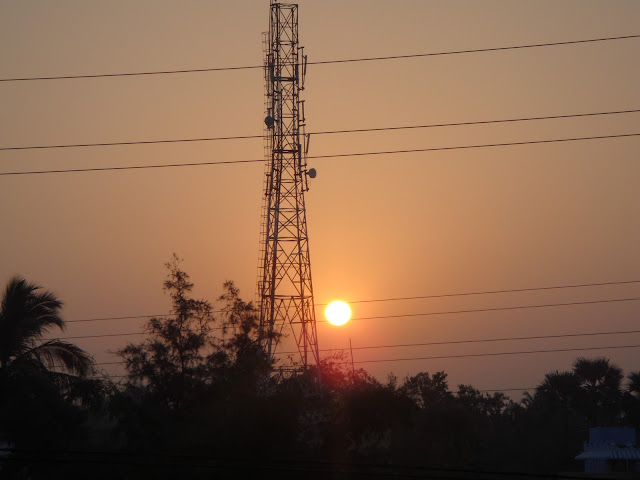 Early morning HVK called us to know the status & was thrilled to know Shri Meenakshi & Uthamkumar had got up very early morning by 5.45 A.M. & had their bath and fresh. We discussed the day’s schedule & plan and he laid it on me that I had to touch Malda at any cost and I had to do some fast paced driving to cover almost 700 kms today.

Gosh look at all these names & try to remember impossible!!!

After coming out of the Dixit Motel in Bhadrak, at 7 A.M. we drove on. At around 8.15 A.M. we found a decent road side Hotel Gajanana Dhaba. We all were very hungry and wanted to have breakfast. We went in & found it to be clean and we decided to sit outside and asked them to put chairs & table & were basking in the early morning sun. 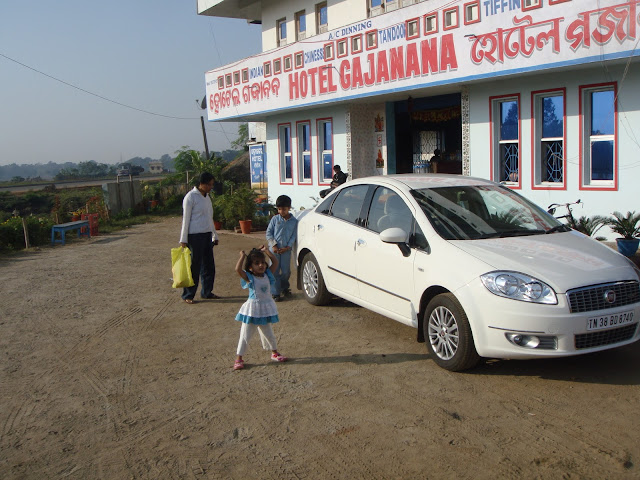 We ordered stuffed Paratha, plain Roti & Dal Fry. All I can say is that the food was served hot & it was freshly made & tasted yummy. The rotis & parathas just vanished and we were asking Dil Mange More. Got hot milk for kids, some hot chai for me. We left the Dhaba at 8.30 A.M. without wasting any more time as I had to cover almost 700 kms in this day. 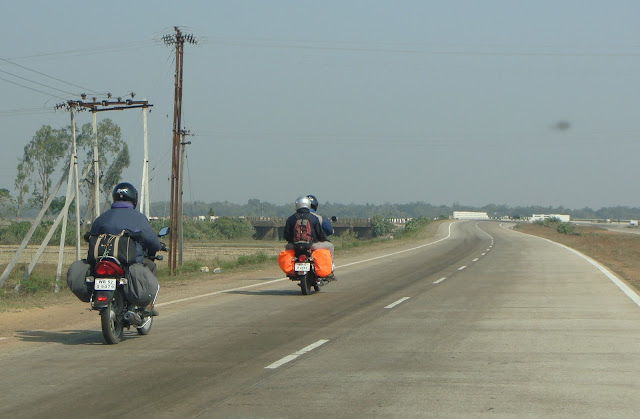 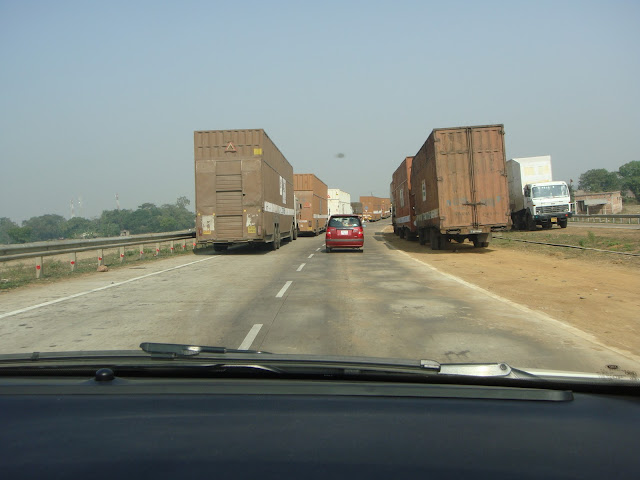 At 12.45 P.M. we were at Kolkata By-Pass (near Kharisa) and halted at Shere Punjab hotel which was recommended by HVK. It was a good hotel & we had our lunch. 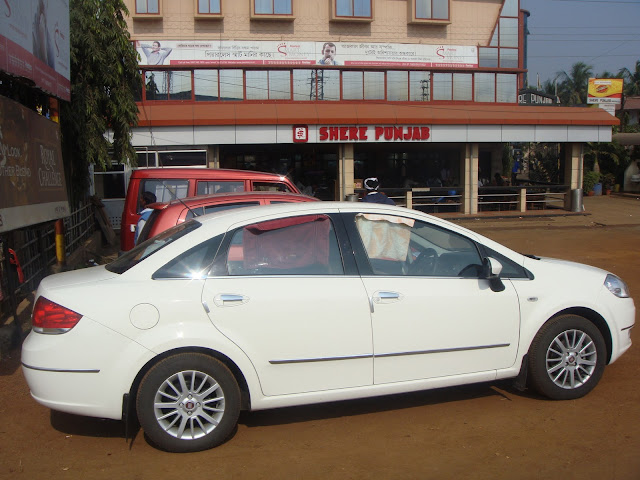 We are in Bamboo country. 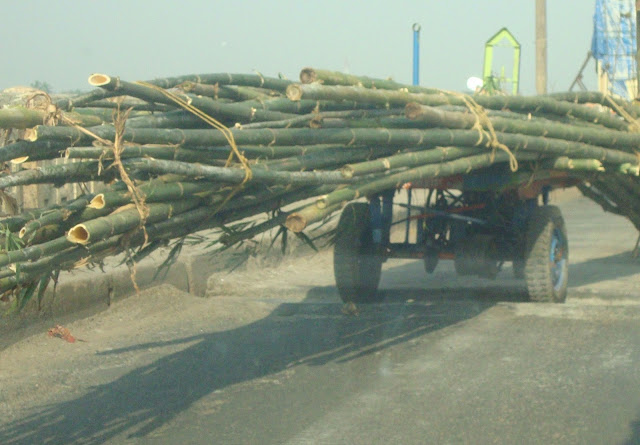 HVK had clearly informed me that I should take the road that was pointing towards Delhi & not the one showing towards Kolkata which would take me into Kolkata City. I continued on this NH-6 further on leaving Kolkata City behind. We all recognize this yellow Ambassador Taxi which is so unique to Kolkata. Kolkata so near yet so far. 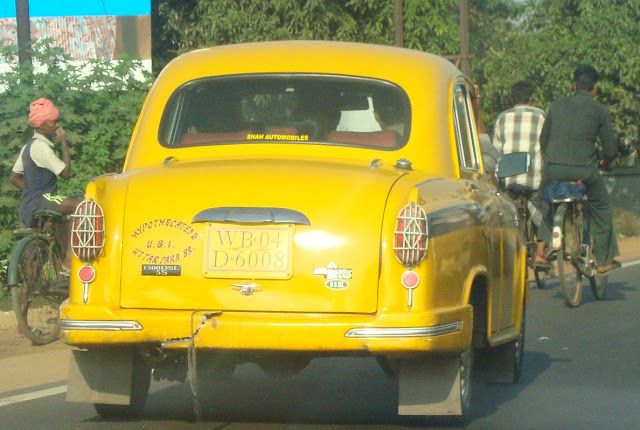 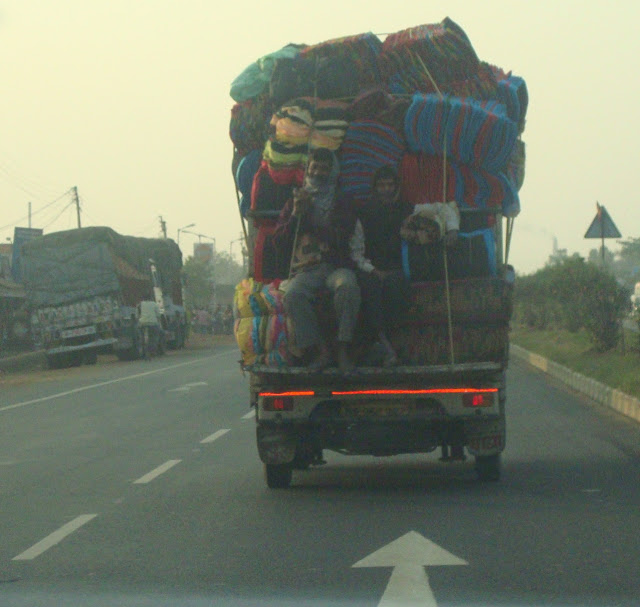 I have some very good friends from my Palio Users Group in Kolkata – Amit Mazumdar, Subhasis Kundu, Saurabh Mitra, Cecil Philips and many whom I could not meet as I was by-passing Kolkata.

Now we are getting into NH-2. At 4.45 P.M. we saw a beautiful scene of sun about to set and in the background of a factory my son Uthamkumar took these beautiful photos. 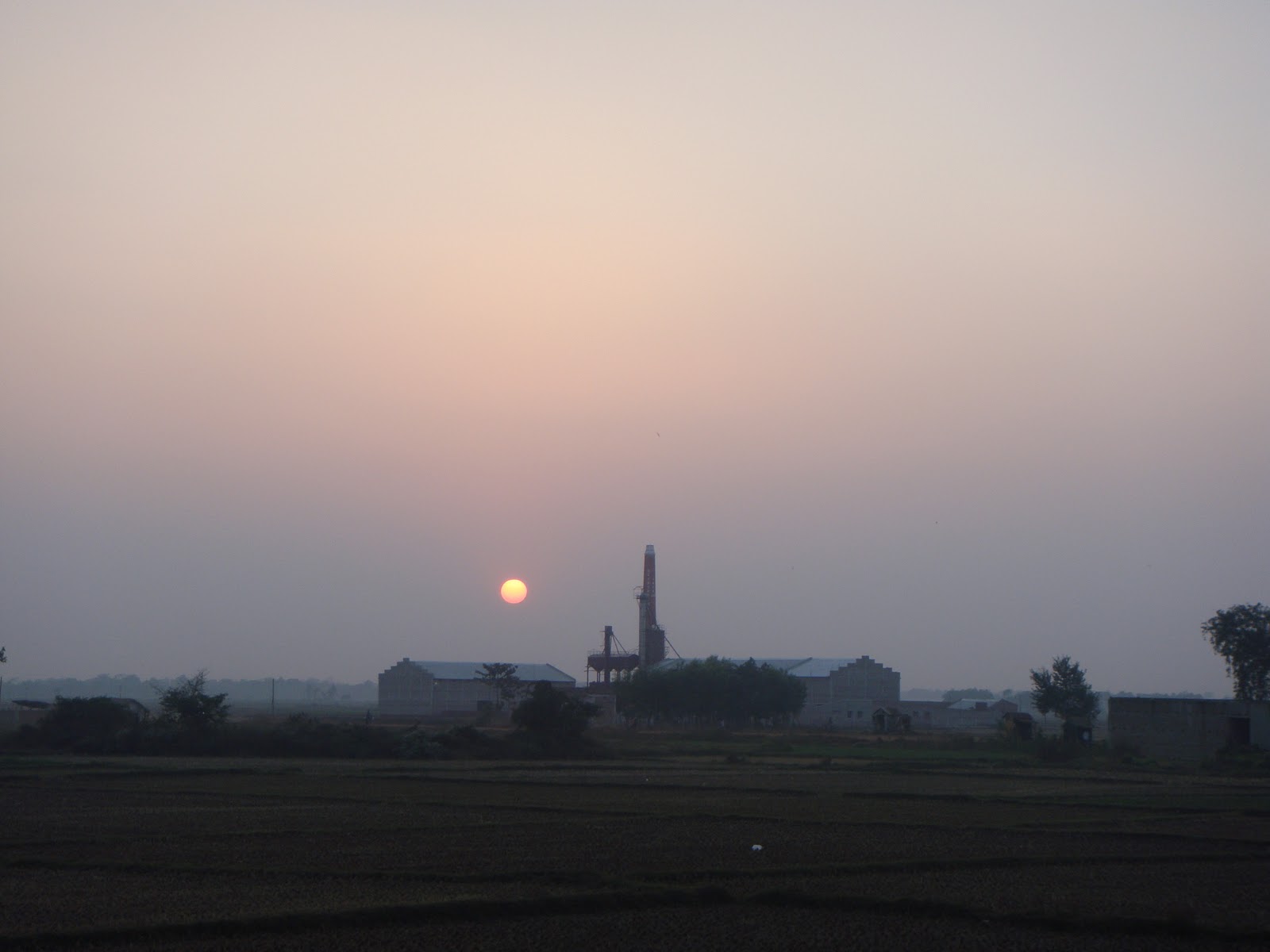 At 9.45 PM we were still 49 kms away from Farakka Barrage. Farakka Barrage is built on the mighty river Ganges and Gallons of Ganges water flows under this Barrage & this water goes from India into Bangladesh. HVK had told us not to miss to see this Barrage. Unfortunately it was pitch dark when we passed and even though the barrage was well-lit with many sodium vapour lamps but we could not stop to see as there was very heavy Lorry & Truck traffic and it was pitch dark too.

This Barrage has 123 sluice gates and is the longest barrage in the world and has entered the guiness book of world records. The construction of this huge barrage started in 1960 and was completed in 1974. This barrage was built to divert Ganges river water into Hooghly River. The water is used to feed the Farakka Thermal Power Station. Driving on this Barrage is an experience & scary too. The roads on the barrage are very bad full of pot holes and you can hear the huge sound of the water flowing.

We passed this barrage after 10 P.M. and there was heavy lorry traffic & it can be a nerve rattling experience to have these huge lorries just coming so close to you and you have to drive very slow and most of the drivers switch off their head lights as head lights can be very bright at close range when we are passing so slow. I was just wondering how long the barrage will last with all the abuse it is going through now.

The barrage is well guarded on both sides. Some times the traffic is regulated when there is huge rush. This barrage bridge is the link & life line to MALDA & Guwahati, Bhutan etc. We updated our status to HVK and he advised us that at MALDA there are few choices & recommended us Golden Park Hotel and said it is the best.

We were again helped by HVK who called us & gave us the phone number of Golden Park. I called them up & booked a room. I really wondered when HVK would sleep & take rest. I had to keep calling the hotel and tell them I was on my way and it is slightly out side the town and you really wonder where it is as you have to drive out of city.

We had ordered for dinner much earlier itself before reaching the hotel as room service would be closed. We had very late night dinner by 1 A.M. mid night and slept. I had done 700 kms on 21st December 2010. 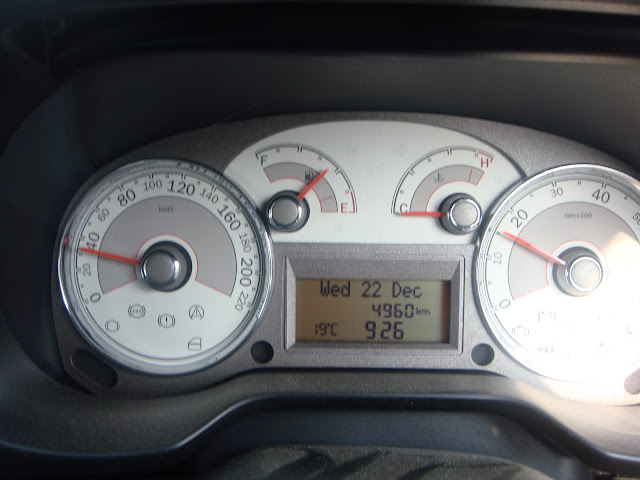 The hotel details are

This is what the trip is all about – endurance & will power not to give up. Constant encouragement from HVK and my life partner sitting next to me kept me going.

The Land of the Thunder Dragon (BHUTAN) – Day 4 was last modified: August 15th, 2020 by Mahesh Natarajan

After around 3 hours, as we returned, I had mixed feelings. It was the feeling of immense satisfaction about our last brush with the backwaters, but a feeling of gradual sadness was also seeping through, as we prepared ourselves to say Au-revoir to Kerala.