29th Oct 2008 – We had plans to go to RK beach early morning to watch the ocean with rising sun. But due to exertion from the Araku trip, we woke up quite late. We had booked the same driver for the last day of our trip. It was almost noon when he arrived with his car. We left for Indira Gandhi Zoological Park in Vizag city. The park spreading over an area of 625 acres, exhibits about lots of animals and birds in open surroundings, except the birds of course! We decided to move around in car only. One thing we noticed in Vizag that at every tourist attraction there was a charge of Rs.20 for camera. AP Govt is surely minting money from tourism. There is a special house of nocturnal animals where owls, civets, porcupines, wild cats, loris etc are kept in total darkness with artificial dim light and air conditioned cave sort of place. It was both eerie and scary! We were wondering why they have done that as in natural habitat, these animals experience daylight! I found the answer on internet. Apparently the Hyderabad zoo has a similar section.

To make the nocturnal animals active during the daytime for the benefit of visitors, the wake-sleep cycle of the animals is reversed by simulated night condition, inducing the night time activities in the animals. In this connection special arrangements are made to change the time of day gradually, that is from daylight to dark and dusk to dawn, so that the animals are conditioned to the change of biorhythm in their routine life. A modern cave has been constructed to exhibit the nocturnal animals in such a way that people have a feeling as if they are going through a tunnel and see the animals in their natural habitat without causing any disturbance in “The Moonlit Zoo”.

The lions and tigers were resting after lunch. All animals were kept in wide open spaces with just a moat around the area. 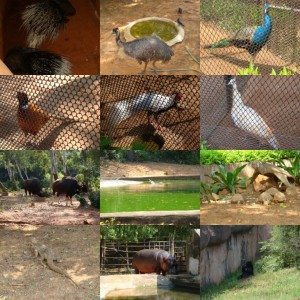 From there we went to the same Hotel Sandhya I had mentioned in part 1 for a delicious Bengali meal of rice, dal, potato fry, sabzi, fish, chicken and curd. Our next destination was the famous Submarine Museum on RK beach. But on the way we stopped at Tenneti Park. Its a beautiful park overlooking the ocean. 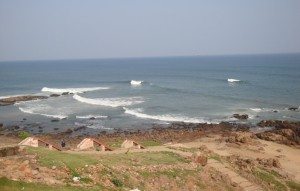 There is another park called the VUDA Park but we didn’t go there. We went to the submarine museum. After decommissioning INS Kursura, the Govt spent like 6 crores hauling it ashore and making it a museum for public display, the only of its kind in SE Asia. Seeing so much machinery and torpedoes inside was just mind boggling! Here is a good link about the setting up of the submarine museum and a link of photos of the inside of the submarine. We also bought some souvenirs from a little shop there. Then we stopped at the 1971 Indo-Pak War memorial at RK beach. This memorial called “Victory at Sea” is established to commemorate the victory of India and successful blasting of a Pakistani ship. Many war related materials are displayed here, including a fighter plane, missiles, few bombs and a tank. 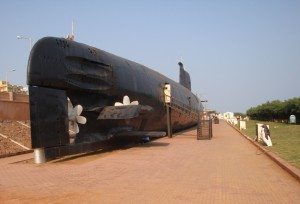 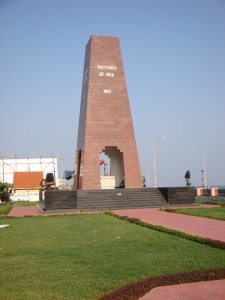 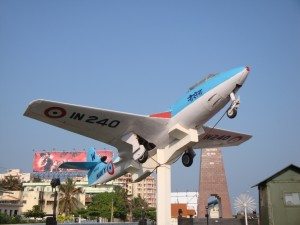 Our next stop was Kailashgiri Park, a tourist spot developed at a height of 130 m overlooking the city of Vizag and facing the Bay of Bengal. There are various view points offering a panoramic view of the city and ocean. We had a ride in the toy train which goes around the hill. There are many food courts too. One can easily spend 2-3 hours enjoying the lush greenery and view from the park. The main attraction is the huge statue of Lord Shiva and Goddess Parvati. As there was still lot of time left for sun to set, we didn’t stay to enjoy the city lights view from the hill. 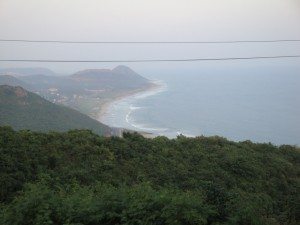 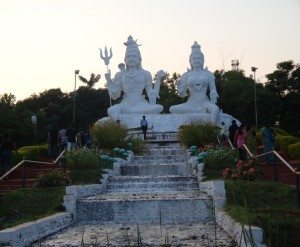 Our last stop was at the Matsyadarshini i.e. Fish Aquarium. It was simply wonderful to see all those species! It was hard taking snaps of moving fishes.

Then we came back to hotel, had our dinner, packed our stuff and went to sleep. Our trip ended next morning when our train left Visakhapatnam station. We were exhausted and felt that 3 days is very short for visiting Visakhapatnam and enjoying it fully with rush. Next time no Araku and 3-4 days only in Vizag.

Here are the souvenirs of the trip.

Hope you enjoyed my series of posts on my trip.

The Finale to Visakhapatnam Trip was last modified: December 9th, 2019 by Reema

Me and My cousin Gaurav decided to take this unusual route on a week long trip and cover these many hillstation in one go.Best…