A 0445 hrs start on our drive to Joshimath gives us ample time to stop for birding and halts at scenic places to take in the enigmatic majesty of the Himalayas.

Satpuli is one such place which is spread out in the valley below looking absolutely enchanting in the morning light. It is said that Satpuli got its name from the fact that it has seven bridges (‘sat pul’) on its way from Kotdwar.

Moving on… the road gets narrower and climbs higher taking us to Paudi and then to Shrinagar, it’s a lonesome stretch where we go for tens of kilometres without sighting a soul! 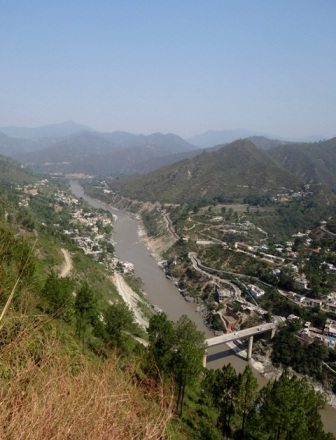 Shrinagar is located in a wide and beautiful valley with the Alaknanda gently meandering below. It is a bustling cantonment town and also the point where we join the regular yatra route making for extremely long lines of vehicles going up towards Kedarnath/Badrinath. At points we are barely crawling along… tiresome really!

Lunch is at Karnaprayag and we look for the sangam there in vain! I am positive there is one ….! Only on ascending the road further towards Joshimath do we see it. The beautiful green waters of the Pindar merging with the frantic turbulence of the Alaknanda! A beautiful sight indeed!

The Pindar just before the sangam at Karnaprayag 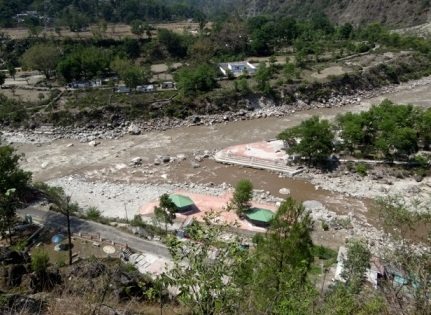 We make Joshimath quite uneventfully that evening. Jyotirmath, also known as Joshimath is a city in Chamoli District in Uttarakhand. Located at a height of 6150 feet, it is a gateway to several Himalayan mountain climbing expeditions, trekking trails and pilgrim centres like Badrinath. It is home to one of the four cardinal pīthas established by Adi Shankaracharya. We settle in early for the night in anticipation of the next day’s outing to Badrinath! 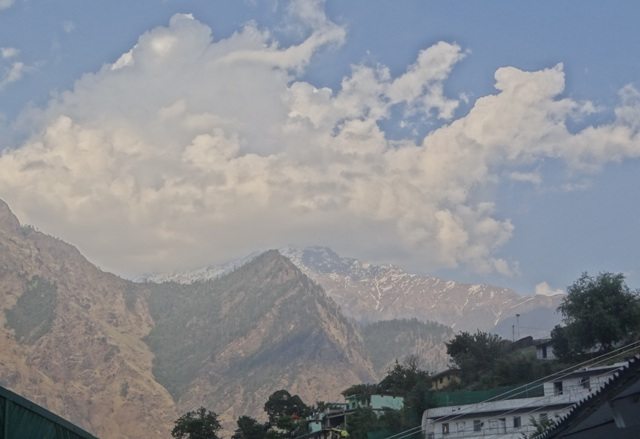 The gate system being eliminated this year… we have the luxury of starting out after breakfast. By 0700 hrs we are on our way to Badrinath. Govindghat, Pandukeshwar, Hanuman Chatti…. it is wonderful to finally see the places one has only read about and plotted on maps prior to the trip. These are lovely little settlements along the river, each with their own set of legends attached. Govindghat of course, the gateway to Hemkund Sahib and the Valley of Flowers. 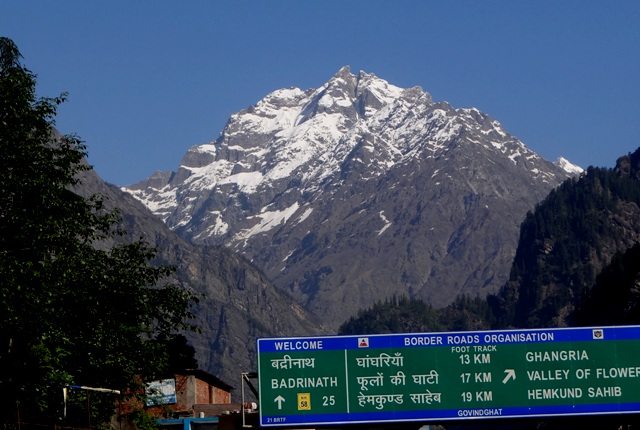 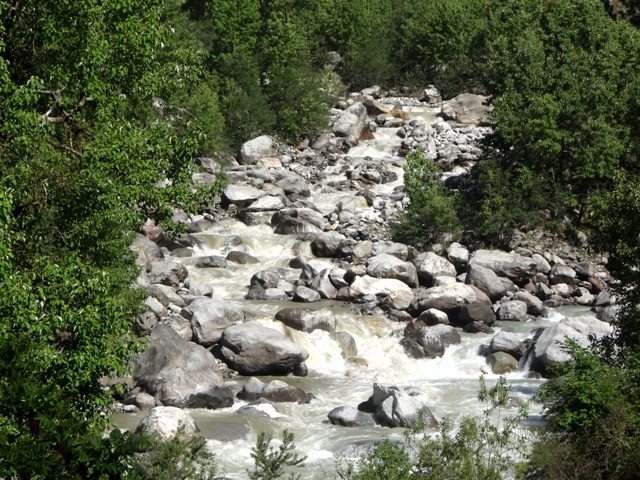 The Alaknanda river alongside the road

Pandukeshwar, legend has it that the Pandavas spent their exile here. A bright splash of orange in an otherwise brown and green landscape, Hanuman Chatti has a predictable saffron coloured temple dedicated to (who else??) Lord Hanuman. 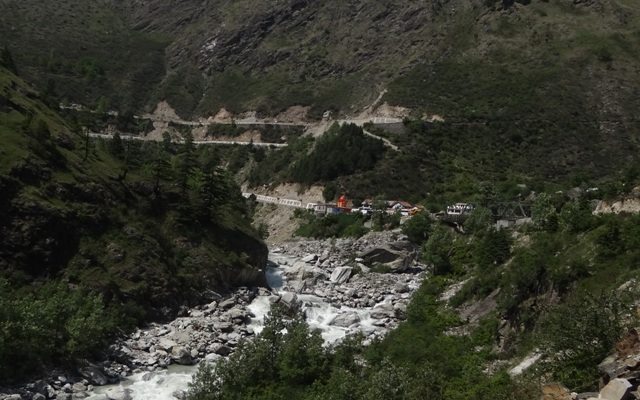 Right after Hanuman Chatti starts the steep, sharply winding and dusty part of the route. Negotiating that part needs intense concentration since the visibility is barely a few metres due to the dust kicked up by the vehicle ahead. This route has enormous numbers of trucks carrying construction material and large Volvos packed with pilgrims plying alongside the usual Taveras, Innovas, Sumos and an assortment of other cars. Additionally, the road is potholed, and intermittently swamped by small rivulets of icy water from the snow melt higher up. 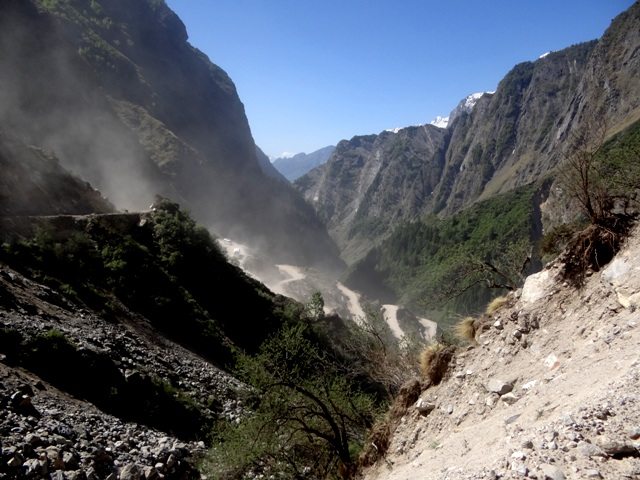 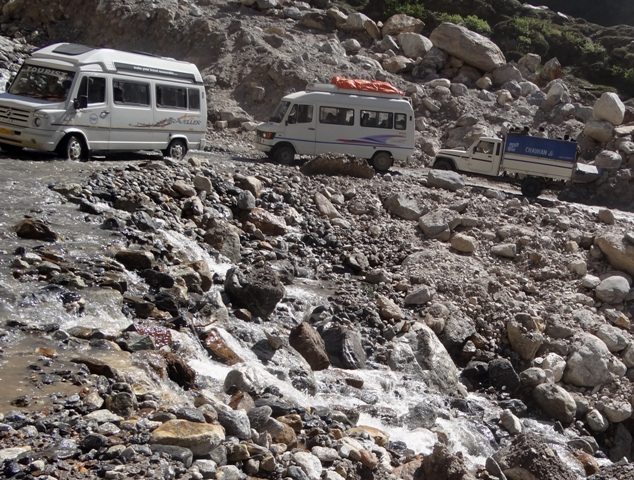 Icy rivulets cascading across the road

The first glimpse of Badrinath is mesmerising!! It is nestled between the Nar and Narayan ranges. The towering Neelkanth lies just behind the Narayan Parvat on which the Badrinath shrine has been built. In the pristine morning sunlight and the crystal clear visibility of this place, this brilliant megalith has a strange magnetism. I think everyone who visits this place must be a little bit under its spell.

The little settlement haphazardly built around the temple is but a random patchwork of colours in a vast magnificent landscape meant to command… dominate… enthral… hypnotise… inspire… all at once!

The lofty snow capped peaks in the backdrop of the gurgling Alaknanda far below … this is the place which has so much spirituality that you can almost reach out and touch it. Nothing is godlier than nature itself!
It really puts things into perspective. One senses how small, insignificant and petty are human egos, wants and conflicts in a scale this extravagant. It is at once uplifting and calming… a place I felt at peace with myself and the world at large. The Himalayas in their splendorous beauty! I’ll let the pictures do the talking… 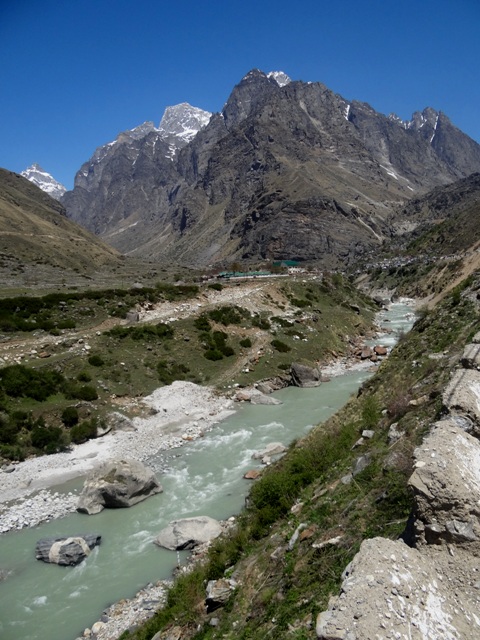 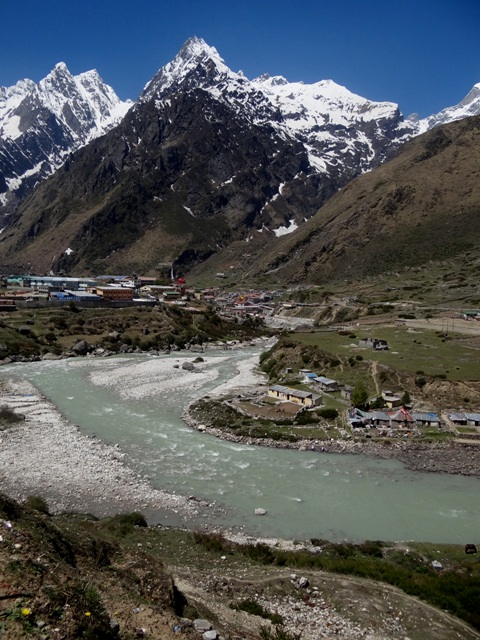 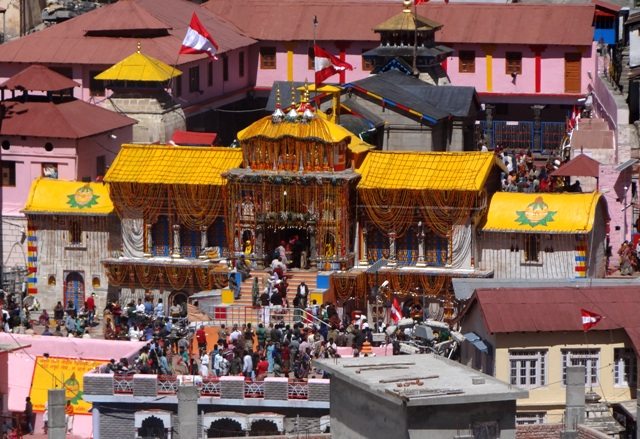 After Badrinath (which is chaotic in the extreme for parking, darshan!!) we proceed to Mana, the last village on the frontier. Parking woes follow us here too. We park half a mile away and walk up to the village albeit with some reluctance at seeing the enormous crowds going both up and down. 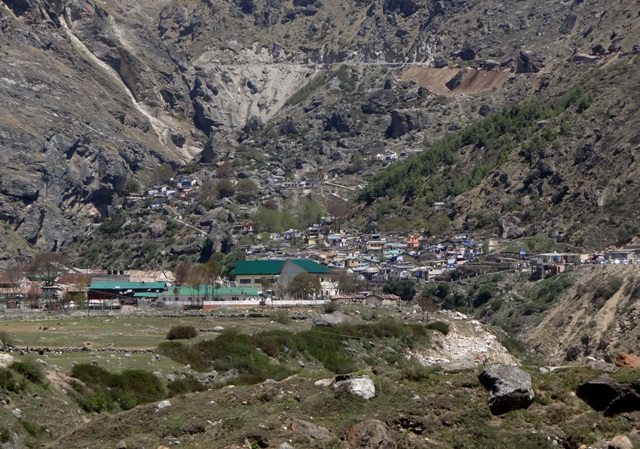 The last Indian village before the China border – Mana

Across the river on the other bank are many small fields freshly ploughed. We notice what look like pigeons flocking there except that they are oddly coloured. Realisation dawns on us that we are looking at 150 to 200 worth flocks of Snow Pigeons!! What a sight! 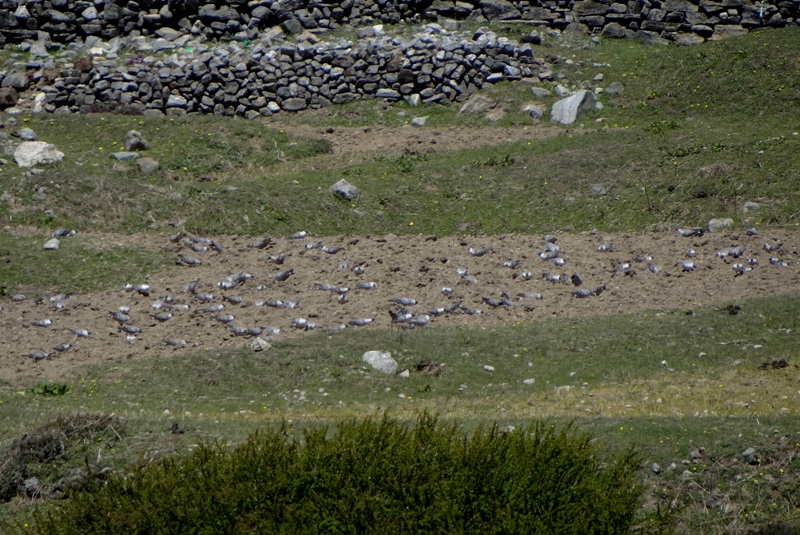 Walking up towards the famed Vyas and Ganapati Gufas as well as the Bhim Pul, our attention is caught by a pink browed Rosefinch perched deep in the branches of a flowering tree. He doesn’t seem particularly perturbed by the human presence but refuses to come out in the open either. The Rock Bunting, the Yellow billed Choughs and numerous Rosefinches keep us company all along. 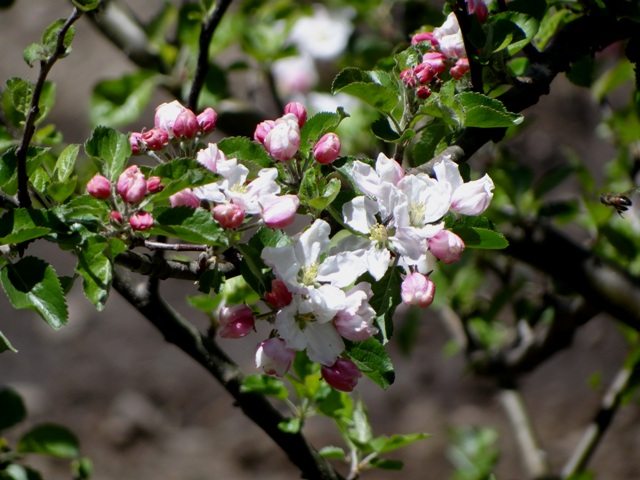 Blossoms of a flowering tree at Mana 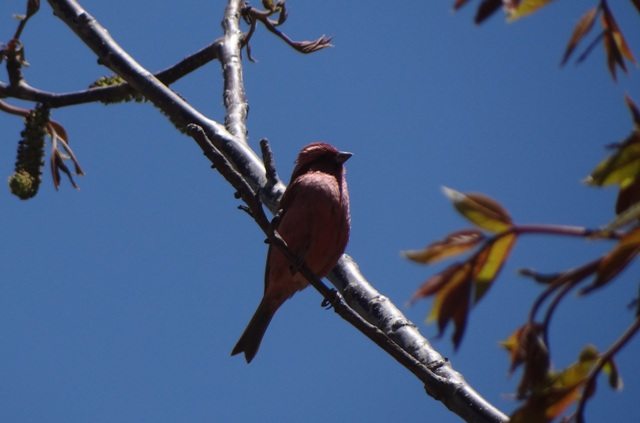 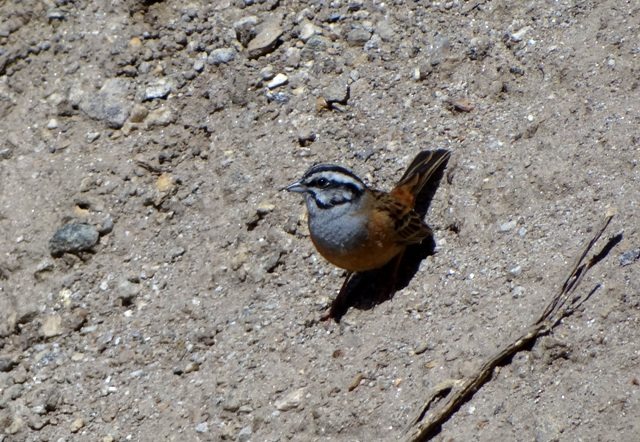 At one point, there is a fork in the path the left one leading almost level and then descending slightly and the right one ascending. Since there is no obvious signage (the board has fallen down as we later get to know), I ask a young lady with two little kids walking towards us on the left fork where do the two paths lead. Her answer has us in splits and I marvel at the simple pleasures of conversations with strangers one is never likely to meet but leave an indelible mark on us for life! She says, “ Upar jaiye to Vyas aur Ganapati Gufa hain aur niche jaiye to Maa Saraswati aur Bhim Pul. Himmat hai to pul ke us paar jannat ka raasta hai aur nahi to wapas parking mein apni gaadi hai.” An accurate description and a great sense of humour!!

Doing the Ganesh and Vyas Gufas and the Bhim pul circuit the other way round, we take the fork towards Bhim pul and the sacred river Saraswati. On the path leading to Bhim Pul is a Naga Sadhu seated in a shallow little cave along the sidewalk. There is a mini-traffic jam on the narrow path as the pilgrims are jostling to take his blessings and others who just want to get a good picture of this ascetic.

The spectacle of the gushing waters of the Saraswati cascading down from under the Bhim Pul and then just as suddenly, forming a calm pool below is awe-inspiring! There is a temple dedicated to ‘Maa Saraswati’ near the river. The fine spray from the fall forms a lovely little rainbow which sparkles in the sunlight lending an ethereal feel to the place. 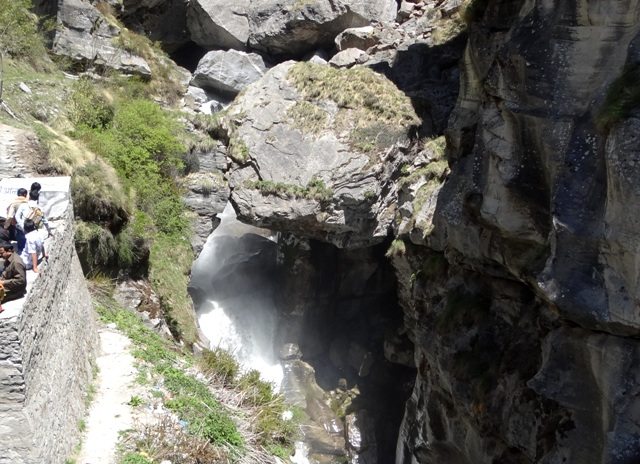 The rainbow at the Bhim Pul

According to legend, the second Pandav Bhim placed the enormous boulder across the gorge to form the ‘Bhim-pul’ so the Pandavs could cross the gushing Saraswati. Proof offered of the authenticity of this tale is that this boulder is chemically absolutely different from the mountains on either side of the gorge where this torrent surges out of. Therefore, it must have been placed there by someone sourcing it from elsewhere. Mythologically, the Pandavas crossed the Saraswati (via the Bhim Pul) and ascended to heaven… Certainly feels ‘heavenly’ enough to stay here forever!

We climb up a pretty steep path to the Maharishi Vyas Gufa where a panditji is narrating the story of Maharishi Ved Vyas and how he seeks the help of Lord Brahma to write the Mahabharat. Lord Brahma in turn requests Lord Ganesh, the divine scribe to help the Maharishi. Before commencing, Lord Ganesh says he will write on condition that the narrative is without a break. To which the Maharishi says that Lord Ganesh should write only if he understands the absolute meaning. This settled, Maharishi Ved Vyas narrates the Mahabharat to Lord Ganesh who takes on the job of a writer to pen it down. A few metres below the Vyas Gufa on a sharply descending trail is the Ganapati Gufa.

Looking back towards Badrinath from Vyas Gufa

The darshans done, we decide to head back to Badrinath. Just short, we see many cab drivers having lunch at a tiny store selling soft drinks and chips. The owner is the cook, attendant, cleaner, steward and shopkeeper rolled into one. The cab drivers and the store owners seem amused that a middle-class looking family is willing to partake of the simple food here rather than go to one of the more pretentious stalls with menus and proper seating. The owner serves only Kadhi-chawal, some green leafy vegetable and hot garlic-red chilli chutney. We halt for lunch and have what proves to be one of the best meals of the trip! Lip smacking, delicious home cooked food!!
The journey back is without incident except for a small rock fall near Vishnuprayag. Looking up we see a herd of Ibex grazing on the slopes above causing small stones and loose mud to slide down.

Back from one of the most awe-inspiring and spectacular locations on earth. Truly, the ‘Abode of the Gods!’

Friends, in my previous post of this series I had mentioned about the Pushkar lake (Sarovar). Now in this post I’ll take you the…