I opened my eyes and looked up at the night sky again knowing that this was going to be a unique experience for me. I was leaving Seattle the following week, and had my friends to thank for planning this trip. There was a predicted meteor shower very late into the night, and we could not have gotten more adventurous. That afternoon, about 15 of us drove to Mount Rainier National Park to be in the wilderness as we watched one meteor after another. Four cars were promptly filled with food and camping gear, and we set out on our 3 hour long trip to Mount Rainier.

We reached there, shortly before dusk, and promptly set up our tents. The next few hours we spent doing some very primeval work, collecting dry sticks, setting up a fire, and gathering some food. The meteor shower was not to start until 1 am, and we had plenty of hours to kill. Like the Golden Age during Shakespearean times, we ate, drank, listened to music, made merry, and more. There is something very strangely satisfying about giving up the familiar comforts of a bed and a temperature control room, and living in the wilderness, even if for a little while. Usually I end up being the trip planner, but the men had taken responsibility this time, and I just sat back and relaxed. Armed with iPhones and all kinds of devices, they had figured it all out. After dinner, we left the cozy comforts of our tent and drove toward a particular spot that was high enough to give us a good view of the meteor shower. Things did not work out the way we planned, and we did not find that spot. However, we did something neat.

While driving inside the national park, we found a segment of the road that had a broad shoulder, an elevated pavement, and a good view of the sky above without the canopy of trees obscuring our vision. We had just found our stargazing spot. We parked our cars, took out our sleeping bags, spread them over the pavement, and spent the new few hours literally staring at seventh Heaven. 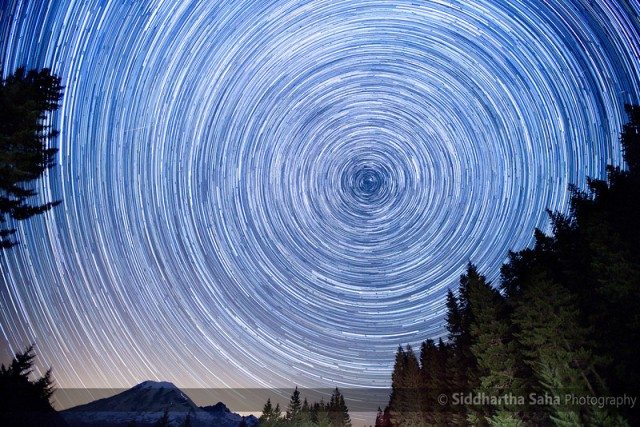 I have never experienced something crazy and surreal like this- lying on the pavement by the main road in a jungle and looking at the stars. It was not a tourist spot or a vista point. Every now and then, cars and trucks would zoom by. Perhaps we perplexed those drivers. Even that stopped after a while. There was no light, but for the little bit of light diffused from the night sky. Like the historic scene in Sholay where Thakur discovered Gabbar had killed his entire family (very inappropriate comparison, I admit), 15 of us lay there on the pavement parallel to each other, talking, singing, and looking up. Someone just discovered the first meteor and screamed aloud. Then the second one happened. It took us a while to orient ourselves, not knowing which angle to lie in so that we could observe more meteors. They seemed to be coming in all directions, some more than the other. We eventually found the “sweet spot”, the angle we needed to face the sky to be able to watch the showers.

My friends around me were undoubtedly excited, but after a while, I zoned out and lost track of them. I was transported to this surreal world of planets and stars. I was suddenly a child again, excitedly reading the book on rockets and space exploration my father got me from the Calcutta Book Fair. As a child, I read these books, fascinated by the powers of the cosmic forces, and convinced that I would be a space explorer someday. A bright meteor just hit something, and all of us screamed in excitement.

Then another one came from a different direction. Like a minuscule particle in this universe, I watched in awe a phenomenon that surpassed the wonder of any earthly occurrence. We lay there on the pavement of a desolate road for hours, snuggling inside our sleeping bags for the much needed warmth. It did cross my mind that while we were busy taking in the breathtaking views of the meteor showers we might be greeted by some wild animal, maybe a fox or even a bear, and that would be the end of it. It was a strange feeling for me, fear mixed with awe and wonder. However, none of my friends seemed to be bothered about rubbing shoulders with a wild animal that night.

We eventually fell asleep for a short while, watching the meteor shower. However, someone had diligently set the alarm clock at 4 am. We promptly woke up (me glad that I had not become the late night dinner for some animal), packed our sleeping bags, drove down to the camp to dismantle our tents, and then drove for another hour or so to catch the first rays of the sunrise kissing Mount Rainier. If the sight of meteor shower was not Heavenly enough, this was another Heavenly sight, the face of the mountain glowing bright orange with the first rays of the sun. 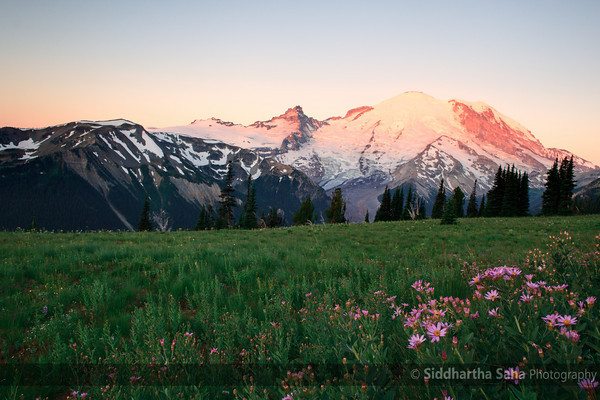 That was my last significant trip before I left Seattle. However, that trip was significant for more reasons. My good friend Sid, an extremely talented and creative photographer, took some still shots and videos of the meteor shower. Last month, one of the meteor shower pictures he took got featured in the National Geographic magazine. It was a proud moment for us! If you are interested in brilliant landscape photography, here is his website (Link 1 and Link 2). And here are the links to the two videos: Video 1 and Video 2. 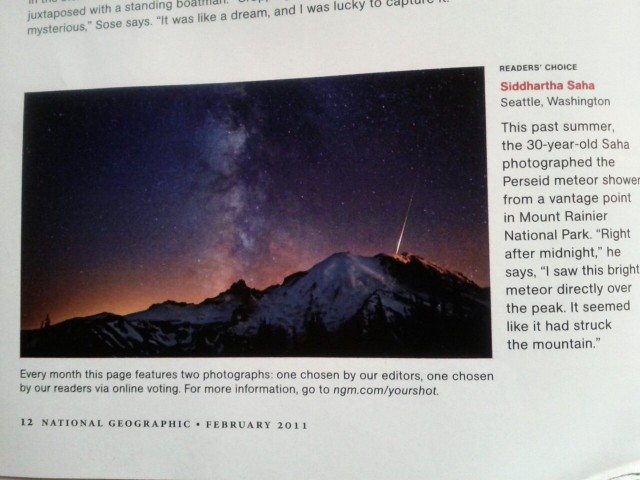 The picture that was published

Before I left Seattle, I watched the meteor showers crouched on a random pavement somewhere in Mount Rainier National Park, inside my sleeping bag, with a bunch of camping enthusiast friends who showed me constellations, the Milky way and other planets in the night sky. I brought with me some wonderful memories and some amazing pictures. This is as unique a travel/exploring experience as it can get for me.

N.B.: All pictures and videos have been stolen with permission.

Now From here boat takes turn and go back to the place where the journey got started. After this boat trip we moved towards the third fall which have a hanging bridge over it. They have created one platform for bath over there but for ladies its not that good.