We had stayed night at Aurangabad and in the morning we left early from our guest house. For today (because of Monday), we decided to eat only after the darshan at Grishneshwar Jyotirling. We hired an auto and reached Aurangabad bus stand and took the bus for Verul We told the bus conductor to drop us near temple as none of us was aware of the place. We gave him 2-3 reminders during this short journey. Despite that he took us half a kilometer ahead of temple. Due to mistake of him we walked (forced morning walk) half kilometer carrying briefcases and bags. Despite of this entire flip flop, we reached temple at 8 AM. 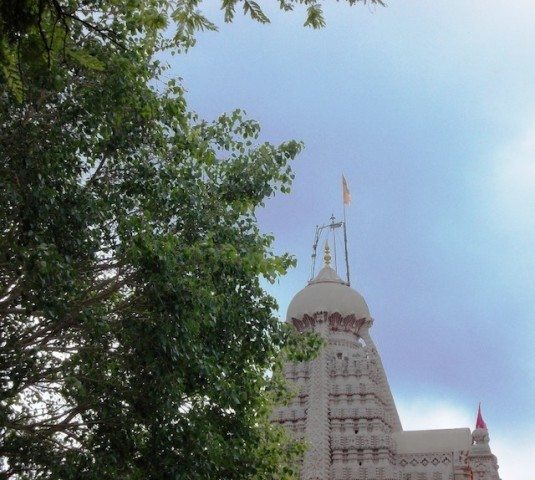 The temple was least crowded of all places we visited in this tour. We had expected a heavy rush on this Jyotirling due to Monday but found hardly any pilgrims. From outside, this temple was looking just another small village temple. Due to high boundary hall of temple, nothing is visible from outside except a small portion of temple dome. 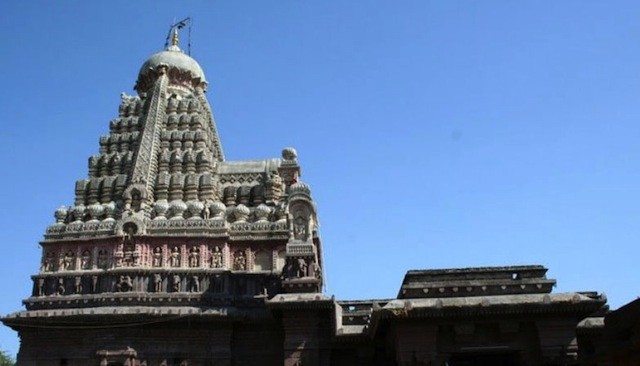 Near the temple, many villagers were selling milk in small packets and utensils to pour on Shivlinga. Number of villagers selling milk and Puja items was more than the pilgrims. It was a perfect case of buyer’s market. They were competing with each other to sell their items at lower rate. We purchased milk, bilva patra and other items for puja. We were sure that due to lean rush we can perform puja without any haste. Entrance of temple is through a door which was quite small compared to temple’s size and reputation. After entrance, there is a large courtyard and main temple is situated in center of this.

There is a small verandah in front of main Sanctorum. Big Nandi statue made of red stone is there, looking towards Sanctorum. Only two three persons were in front of us. We were asked to take off our shirts before entering in the main Sanctorum. We had no problem in this but the tradition of making men remove their upper garments needs to be done away. Gods are not obliged by removing clothes. Sanctorum is 2-3 steps down from the verandah. We perform puja and within 10 minutes we came out of it. Photography is not allowed in temple. I tried to capture Nandi picture from my mobile but a priest came and refused for it.

There is nothing to talk for pilgrim facilities at Grishneshwar Temple. For such an important shrine, it is rather small and basic. Even at the entrance of temple few steps were broken and have no plaster at all.

We came out of the temple complex and tried to capture some picture of Temple dome. One villager saw us and took us on right side of temple from where full dome was visible. 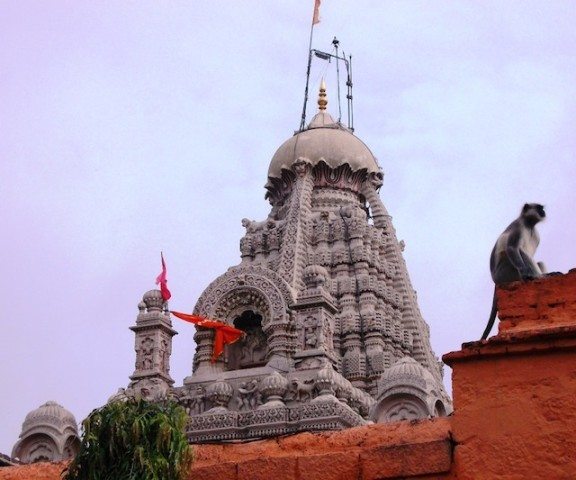 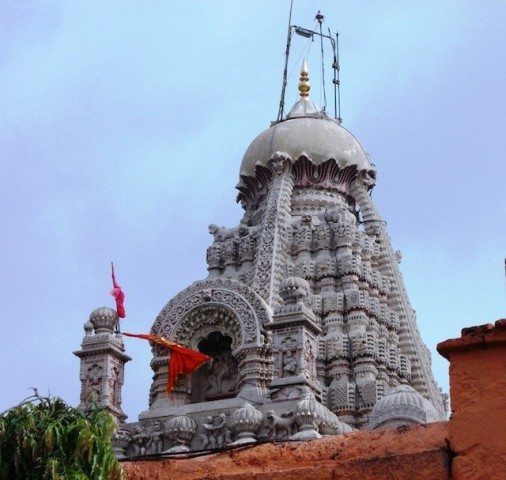 After clicking some photographs we went to Sankalpit Smadhi Mandir which is situated on right side of Grishneshwar Temple. Adjoining it, there is Shahaji Raje Samadhi, the father of Chhatrapati Shivaji Maharaj. The Samadhi was closed and in dilapidated condition. 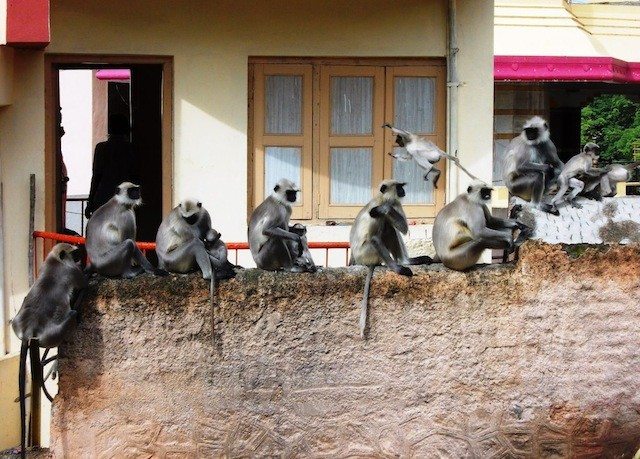 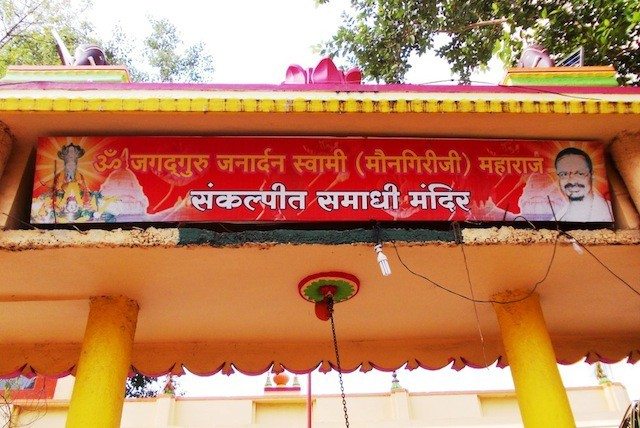 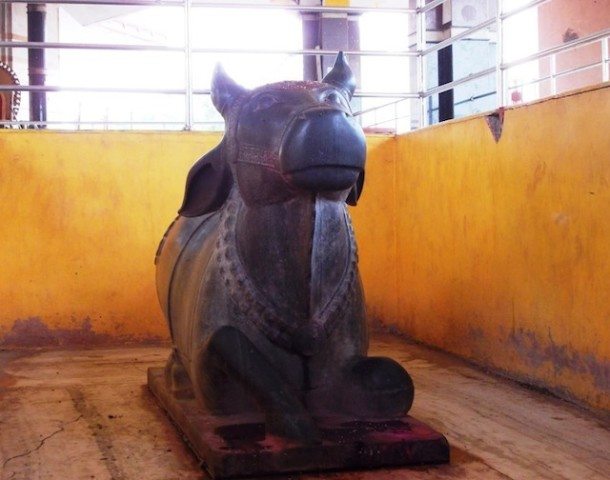 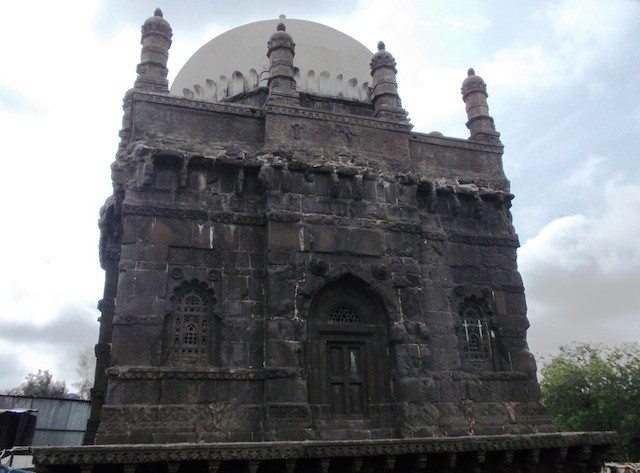 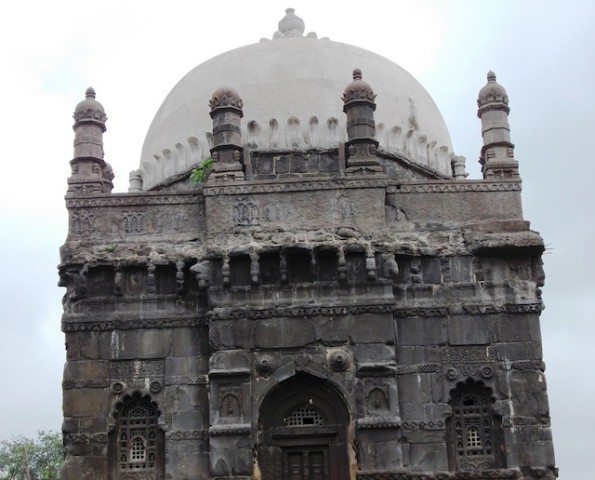 After roaming some time we took breakfast (hot fried pakoras) with tea and left for our next destination..Ellora caves

According to Shivapuran, in the southern direction, on a mountain named Devagiri lived a Brahmin called Brahmavetta Sudharm along with his wife Sudeha. The couple did not have a child because of which Sudeha was sad. Sudeha prayed and tried all possible remedies but in vain. Frustrated of being childless, Sudeha got her sister Ghushma married to her husband. On the advice of her sister, Ghushma used to make 101 lingas, worship them and discharge them in the nearby lake.

With the blessings of Lord Shiva, Ghushma gave birth to a baby boy. Because of this, Ghushma became proud and Sudeha started feeling jealous towards her sister. Out of jealously, one night she killed Ghushma’s son and threw him in the lake where Ghushma used to discharge the lingas. Next morning, Ghushmas and Sudharm got involved in daily prayers and ablutions. Sudeha too, got up and started performing her daily choirs. Ghushma’s daughter-in-law, however, saw stains of blood on her husband’s bed and parts of the body drenched in blood. Horrified, she narrated everything to mother-in-law Ghushma who was absorbed in worshipping Shiva. Ghushma did not deter. Even her husband Sudharma did not move an inch.

When Ghushma saw the bed drenched in blood she did not break down and said he who has given me this child shall protect him and started reciting Shiva-Shiva. Later, when she went to discharge the Shivalingas after prayers she saw her son coming. Seeing her son Ghushma was neither happy nor sad. At that time Lord Shiv appeared before her and said – I am pleased with your devotion. Your sister had killed your son. Ghushma told Lord to forgive Sudeh and emancipate her. Pleased with her generosity, Lord Shiva asked her another boon. Ghushma said that if he was really happy with her devotion then he should reside here eternally for the benefit of the multitudes in form of a Jyotirling and may you be known by my name. On her request, Lord Shiva manifested himself in the form of a Jyotirling and assumed the name Ghushmeshwar and the lake was named as Shivalaya thereafter.

By Train
Aurangabad and Manmad are nearest major railway stations.

Despite the grandeur of ISKON Temple, the Banke Bihari Temple, built in 1864 is still the most revered and vibrant shrine in Vrindavan. The temple was originally established by Swami Haridas, a great Krishna devotee, known for his soulful devotional bhajans (was also the guru of the famous musician Tansen). He discovered the sacred deity of Banke Bihari (also popularly known as Thakur ji) at Nidhivana, where Banke Bihari was originally worshipped.
The deity was moved to Vrindavan on completion of the temple in 1864. The most interesting thing about this temple is that, unlike most of the other temples, the curtain is not left open. The curtain is put shut every few seconds and drawn back with a great chanting of Thakur ji. This is probably done with a view to shroud the icon for a moment. It is believed that the brilliance of eyes of Thakur ji can make a person unconscious, if seen for too long a stretch. Another notable feature is that the lotus feet of the deity can be seen only once a year, on Akshaya Tritiya, which falls sometimes in April / May.