So folks , we rested quite comfortably in that Highway resting place, first time for us courtesy our missed time schedule. The morning next day was quite good in the context that black clouds were looming large in the skies and it was drizzling outside at 6 A.M . 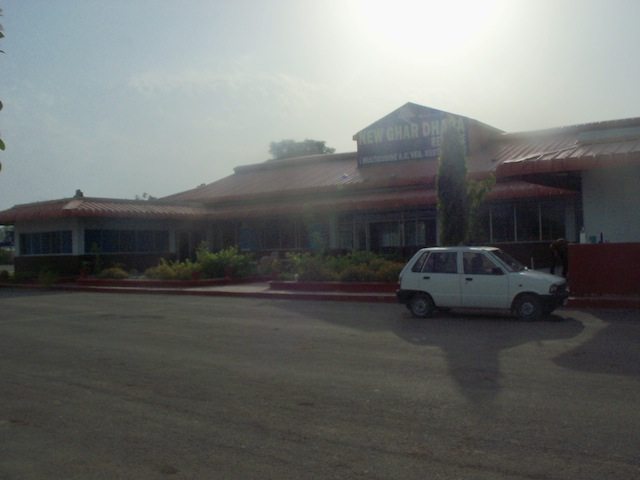 The Place at where we stayed

The clouds were making a thunderous sound but the output was just a drizzle quite like we Indians, generally. Pavani was also awake at that time and was happy to see 2 swings and 1 slide in the outer area. Quite naturally, whatever you try but you can’t get Doraemon and swings out of a kid,s system. So 20 minutes was the time given to Pavani to fulfil her desire and Bhakti to click some Photographs. I had made a point to leave the place by at 7 A.m definitely to in order to reach at time to Ahmedabad and also to gulp lesser amount of bottled water. At about we were near the outskirts of Udaipur city browsing through the all familiar road as we had traversed through this path in winters also. Nearing Udaipur I asked the way to Ahmedabad and came to know that one had to take the left turn from Pratap Nagar area. 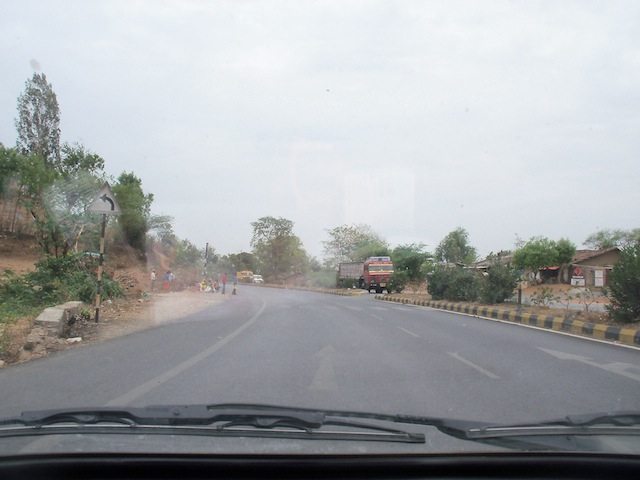 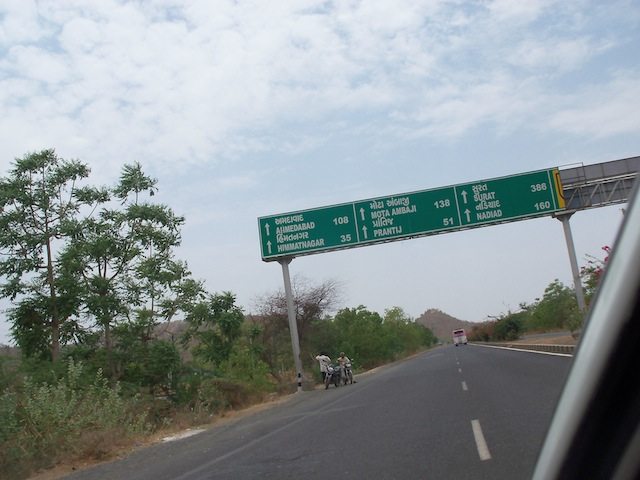 Another indication of Zindagi ka safar

I had expected a thorough smooth journey through this highway but initial 7-8 kms belied my belief as I had not expected a heavy Industrial area in UDAIPUR, just taking this city to be a tourists’ paradise but what we encountered was RIICO industrial zone and rows and rows of trucks in front of us and coming from other side also and road was also not so widened at this stretch. Anyway we crawled through this part dreaming about the great highway ahead as I had heard of. And our dream came true sooner and an awesome highway welcomed us and our Maruti was behaving like a luxury car on this highway, so good is the highway, a zigzag movement notwithstanding. Now all of us were feeling hungary and in search of a good Dhaba was our priority. There it was, Kathiawari Bhojanalya , a nice looking place if not so great and the name Kathiawari had lured us to find some good Gujarati food there. Bhakti had prepared a list of Gujarati snacks and Gujarati sabzis to be relished on this trip, away from all Punjabi food which we eat at home. In the Menu card , a dish (Bagryali Khichri) attracted our attention and it was ordered after enquiring about what was it after all. It was a Khichri preparation with a tadka of vegetables in it to make it spicy. Apart from it, Aaloo Pranthas were also ordered lest we forget where we were coming from… chhachh was also there . This variety of Khichri was very tasty but it can not be said of Aaloo Paranthas as those were deep fried. (I didn’t expect that). Our stomachs filled now we were ready for our onward journey. I had heard and read that vehicles are thoroughly searched at Gujarat border due to it being a dry state. What I encountered was?

And a wave of hand indicating us to enter the territory of Gujarat.

Gujarat about which we had heard a lot and read a lot , about the development in this state that Gujarat was now the territory in which we had entered, crossing the famous shrine town of Shyamla Ji. When we reached Himmatnagar, our Himmat got rejuvenated as Ahmedabad from there was just 72 Kms.

Finally we were on the outskirts of Ahmedabad city where a railway crossing welcomed us and I remembered Jalanadhar as in my daily routine I often pass the railway crossing famous for being closed down often as it welcomes about 100 trains. The area and road ahead was not so pleasing to the eyes. It was a congested area with not so smooth roads. Heat was also troubling us now very much. I had intended to reach Kalupur area as I had intended to find a middle budget hotel in that area as Google had suggested the place to find such an acomodation in that area. Main railway station of Ahmedabad lies in that area. It was proving to be a difficult task seeing the rush on the road through which we were passing. A board on a shop indicated that we were passing through Naroda Patiya. The name looked familiar for the obvious reasons. Anyway puchhte-puchhate, we reached Kalupur area which was very congested. I parked the car in a corner as it was very difficult to find parking area there . Anyway my enquiry in that area resulted that middle budget hotels were there but no parking facility and vehicle had to be parked in public parking area of Railway station which was unanimously rejected and so another search began for a nice staying place. Meanwhile we had taken Nimbu Sharbat from a roadside rehri. We were not famiiar with the roads of Ahmedabad so it was just random choice of roads that we took in our pursuit.  Right, left, right, left and we reached an area called Shahpur road near Subhash bridge.

Now we were quite tired and our Himmat was now vanishing. A last shot at a passerby of finding any decent hotel in that area. The answer was Hotel Kanchan palace just nearby and on 3rd floor but lift facility available and parking just in front of hotel on the road itself (acceptable).  After bargaining got a 3 bed room for Rs. 1100/day (A.C room). So settled ourselves comfortably , switched on the cartoon channel on television to uplift the mood of dear Pavani and ordered one tea for myself. After sweltering heat, the room was a boon for us. Our spirits uplifted, we were thinking of the area which could be explored in the remaining time as it was 4 P.M and we had an ample ime ahead of us to explore the city as I believed that Ahmedabad could not have closed its welcoming arms before midnight just like Mumbai raat ki Baahon mein…

Din khatam hua tha sham nahin, so were ready to explore a nice place of Ahmedabad that evening. I went to the manager of the hotel and asked for the way to the Law Garden as we had zeroed on to this place for the evening. The manager was trying to tell me the way meanwhile a gentleman told the way in his fast spoken Gujarati which came to me as a bouncer and I politely told him that I was from Punjab so Gujarati was alien to me. Meanwhile , the manager told me to take the Subhash Bridge and then after crossing the bridge turn left and ask my way from anyone afterwards. Income Tax Building was the land mark that I had taken out to be in my mind near the hotel. Turning left Ahmedabad in full vibrancy welcomed us as it was heavy rush, a lot of showrooms, fast food counters and young crowd on the roads. After asking our way from 2-3 persons we finally reached Law Garden.

LAW GARDEN – The place to inhale some fresh oxygen in this bustling city and also to shop for the ethnic Gujarati wear from a row of shops outside the garden and to have snacks, a lot of, to choose from from the place behind the Law Garden, this was accidentally discovered by me while taking the U-turn. 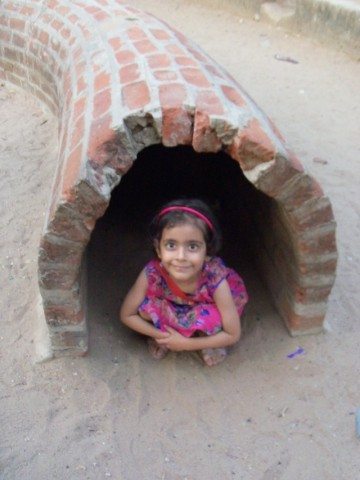 Pavani, enjoying in one of the structures 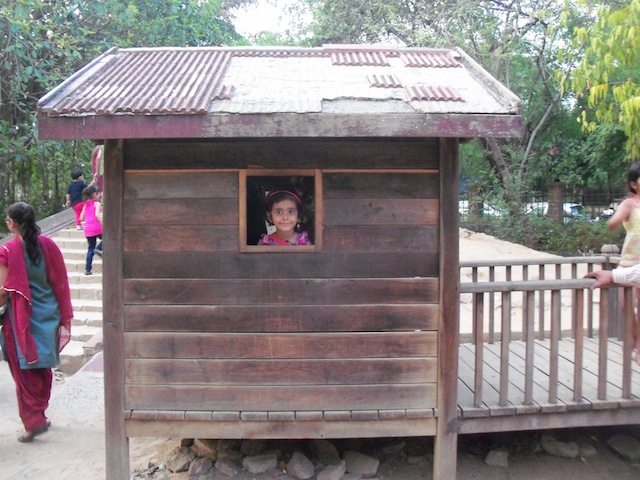 The garden is not so well maintained still a nice place to enjoy your evenings. I observed 3 things here which I think epitomised the culture of Ahmedabad in my view:

1.  Aged persons were sitting in the groups of 10-12 which pointed towards a certain bonhomie and the importance of being in the same age group didn’t push them towards a kind of frustration or loneliness.

2. Young persons were all busy with themselves only least caring for the vague details like that who has entered the park, what a person is wearing, is it an expensive attire and on and on. A very good sign from sociological point of view.

3. Families also came in the groups along with the bedsheets from homes, small sized water coolers and tiffin boxes (a picnic type outing which has gone for a six in the northern parts of India because of ostentatious and showing off lifestyle of people, in general)

Pavani enjoyed a lot in the garden on slides and all. Bhakti was more interested in the ethnic wear selling outside, I, in my thoughts was frantically searching for some fast food. hahahaha…. and my better half was with everyone.

My wife and Bhakti inquired about the rates of the stuff selling outside. I had pre-warned them that the ethnic wear selling there had to be bargained heavily and the price quoted by the shopkeepers had to be cut to one-third. It proved to be true. Nothing was brought there and it was decided to try elsewhere also before buying. While taking U-turn towards the road which would take us to our hotel, I encountered rows and rows of moulded chairs and tables and cars and cars and signboards for various varieties of snacks(our favourite signboards). We all became happy and it was another U-turn to please our gastronomic buds. Our car being parked somehow, we took the seats in one of the kiosks and our stomach was treated to some tasty Dosa, Chaat and Pao Bhaji. While sitting there a look on the opposite side revealed the famous Kulfi wala ‘Asharfi Kulfi’ about which I had read on internet. The menu list of various varieties of icecreams and Kulfis was a long one and different one also as the stall had cut kulfis in different flavours. A look at the signboard revealed that they had a branch in London also. Great… 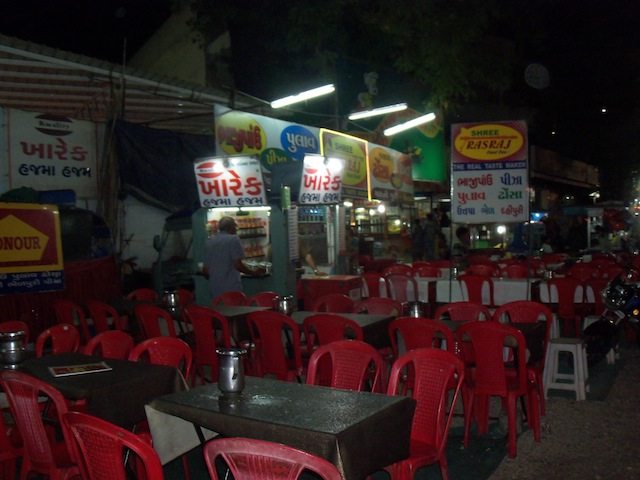 The place behind the Law Garden 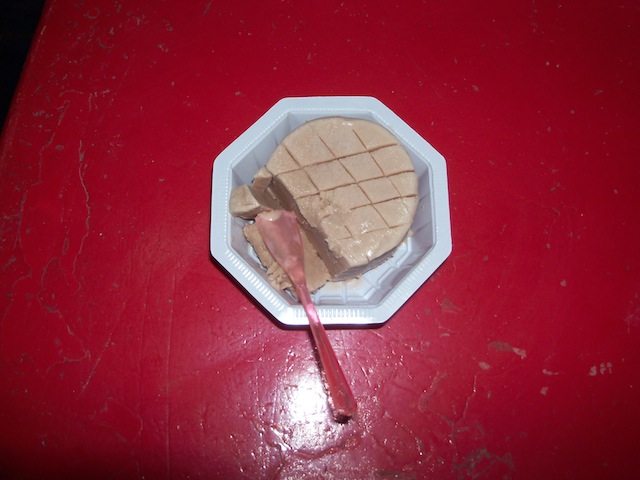 3 CUT-KULFIS were ordered, the presentation was quite good, unseen by us so far and the bill that came afterwards was also good, unseen by us. Any way we enjoyed the evening and lo… back to the hotel. Jaati Baar rasta nahin poochhna pada.

A gem by Makhdoom: