Much awaited outbound of Airtel AES SMG to Shilonbagh sounded exiciting as it was again to my favorite destination – Himachal Pradesh. Location as planned was Toshali Royal View Resort at Shilonbagh, approx 450 kms from Gurgaon and situated at the altitude of 2300 mts. above sea level.

This resort around Shimla/Kufri provides excellent views of the pine forests in the valley and snow peaked mountains including Kinner Kailash, Churchandni peaks and the Shivalik ranges in Himalayas. Apple orchards and other fruit trees abound in the resort giving the place a unique style and look. 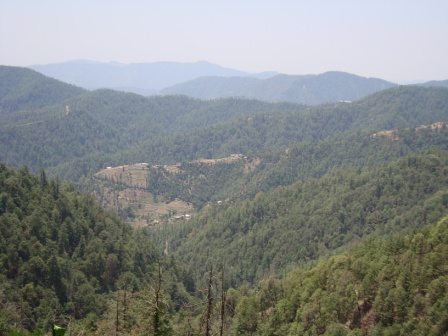 View to the Green Valley 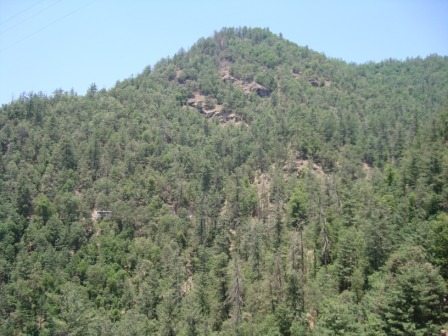 Planned route was NH1 till Ambala, Ambala to Panchkula via Derabasi NH73 , Panchkula to Kandaghat NH22, Kandaghat to Shilonbagh via Chhail SH 8.

Day 1 Gurgaon to Shilonbagh
We started our journey on 21 May around 10.30 pm with a group of almost 50 people. People started enjoying in the bus itself(I think being together gives a click to people or was it being away from work-pressure or both) and continued till Haveli (Near Panipat) where we stopped for Dinner. The food was excellent along with the local themes and views in there. 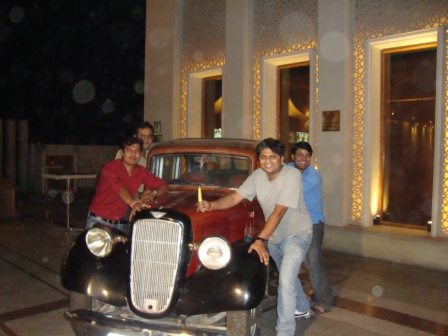 Car in the Haveli

Journey continued once every one filled up their tank. NH1 as usual was pleasant and we continued the journey smoothly till Ambala and then took NH73 and again the drive was nice and smooth.

We entered Himachal through Parwanoo Border and known problem started as the colleagues who were not used to ups and downs felt dizzy but to our surprises everybody forgot everything as the breathtaking views of Himachal. It is again proven; visting Himanchal can make anyone to forget their worries and pain.

Our driver was a smart guy and knew exactly how to drive in Hills and continued to do his best. He took SH8 from Kandaghat which gives the most scenic views. Road condition there was but was very narrow in some places. We enjoyed the views throughout and finally checked in around 11.00 am on 22 May in Toshali Royal View Resort. 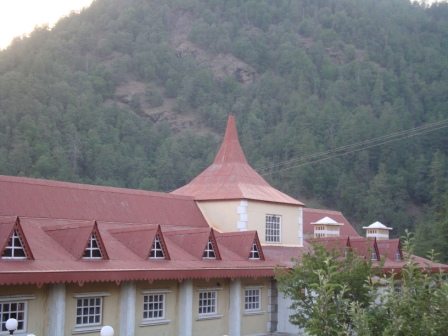 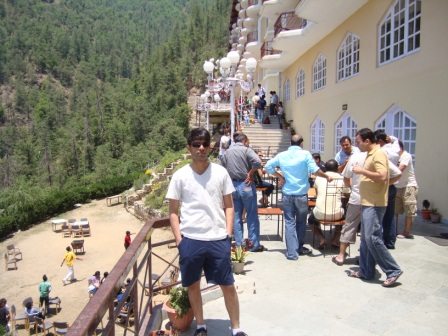 As soon as we reached people got charged and surprisingly everyone was out for activities, planned just 200 mts from resort. Every one participated in the reppling and river crossing (although there was no river or any water body). We enjoyed a lot and cheered up for the participants.
After finishing activities, we had yummy lunch at the resort and then separated as per our preferences, some opted to rest while some went on exploring the nearby tracks. 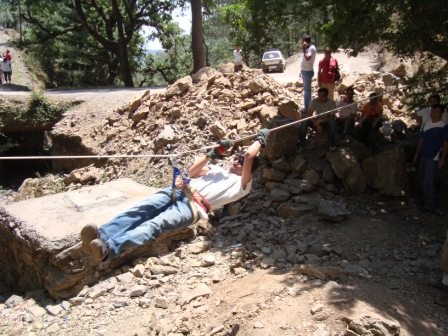 By the evening we gathered for cocktail and DJ party. Every one shaked legs on their favourite numbers and party continued till 11.00 pm and were force to stop by the DJ himself. Finally we had the dinner and called it the day off. 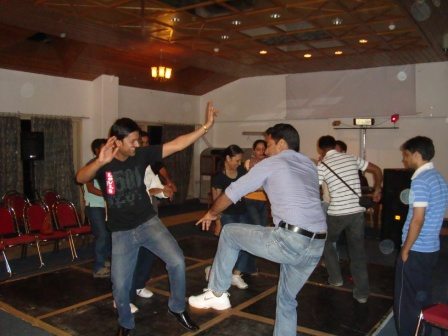 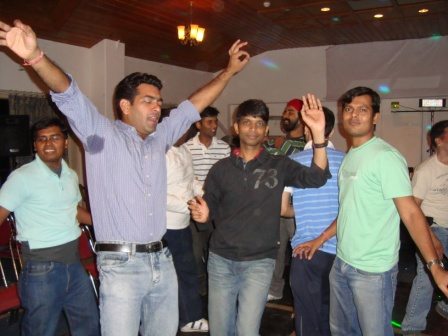 Shilonbagh as we understood from villagers was a trekking route approx 3 kms to a Shiva Temple, considered to be built in 8th century and situated at the 2550 mts above sea level. We started trekking early morning at 6.30. The path was difficult but people were giving their helping hands to those feeling low and tired. We succeeded to reach at the top of the hill. 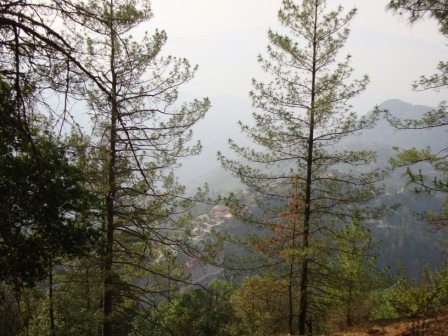 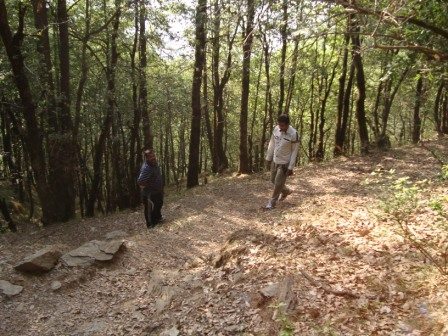 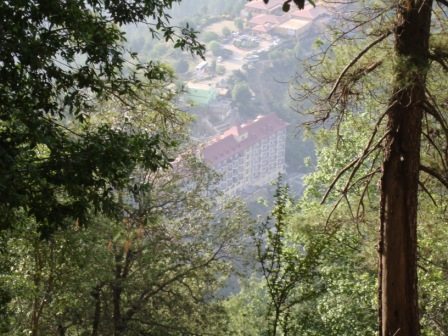 Trekking...View of the Resort from Top 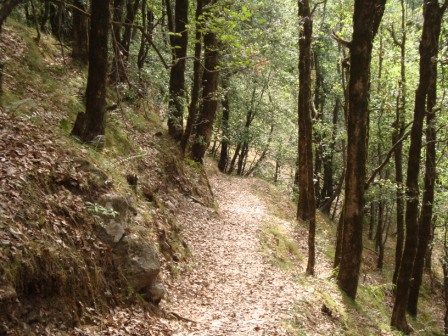 Understood from “Poojari” that the temple opens only once on Shivratri so missed going inside the temple but the view outside was also breath-taking. 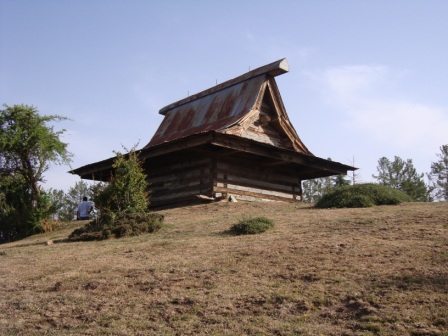 One can clearly see the most scenic Himalayan peaks. We were not lucky enough to the range clearly as it was hazy day. Anyway group started enjoying the same in different ways Yoga, photography, exploring around temple…After spending some quality time (around 30-45 min) we started back to Resort. RainGod also started giving welcome to Airtel people and temperature also went down giving a further relief.

As soon as we came back delicious Breakfast was waiting. Some of us started exploring activities within resort like playing Chess Cricket while some preferred spa & kerala massage :-). After a relaxed morning which was a luxury for all of us, we had our lunch followed by reward and reorganization ceremony. Immediately after the ceremony we left for Kufri, the place was over-crowded and I think this was not the place we were looking for. Anyway we visited the zoo for Male Monal which is rare beautiful bird found in Himalayas and is Himanchal’s state bird. It is the National bird of Nepal, where it is known as the Danfe.

In return journey we just thought to walk till Shilonbagh and after 5 kms of walk since it is getting dark we took a lift from a local tempo who was going towards our place. Since the it was open tempo so everybody enjoyed the views of all peaks, visible after rain !!!

Its evening now and we arranged a bonfire alongwith….yes..DJ Hurray!! Once again everybody forgot about the tiredness, work-pressure everything and dance on every beat that continued till 11 PM after that we had a nice and delicious Dinner and left for Gurgaon with lots of memories, cheers and new friends….

Exit gate of the glass cabin led us into the park in real with various species of flowers thrown in great abundance and small placards indicating to us that a particular flower catered to which particular species of Butterfly. As the weather was quite hot, we could not find the butterflies in a significant number though.