Simple Question… What is common in Namaste London, Patiyala House or Desi Boyz.. Akshay Kumar,hmmm yes and these movies share another commonality – London. Actually I was not sure whether to write about this trip or not, London being one of the most celebrated city and shown in numerous Bollywood movies already. London has inspired many Bollywood film-makers to tell their stories here and the capital’s landmarks have provided the backdrop to some of the most popular Bollywood films, including Trafalgar Square, Natural History Museum, Tower Bridge, Piccadilly Circus. 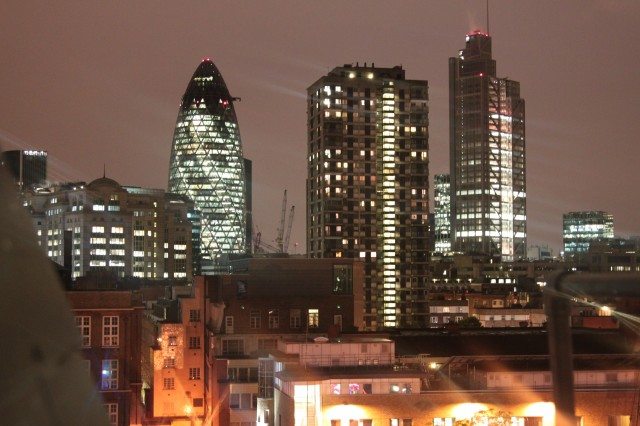 I was on official trip to London while Girish suggested to accompany me on the trip.. For him it was his first visit and wanted to explore the city (of London) which i praise all the time… It was a perfect timing as summers in Delhi was getting unbearable.. 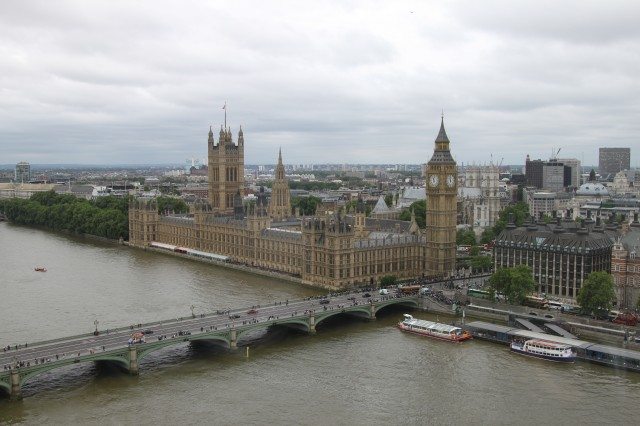 Welcome to London : Late night British Airways flight from Delhi arrived early morning 6:20 in London, cool breezes freshened us up and we didn’t feel any Jet lag.. With language i preferred Taxi but due to some on-going construction work, it took us more than 2 hours to reach Commercial Street where our stay was arranged.. 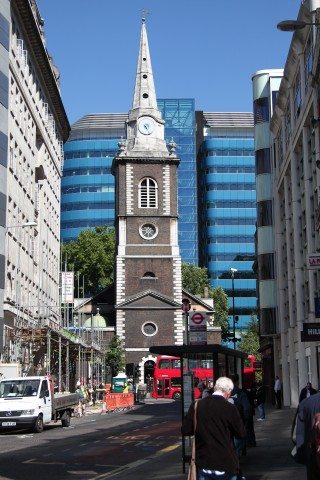 Quite Thursday Morning: oops it was Thursday morning and i had to rush for the office same day we arrived London. Girish planned his day to visit some well known places in London, with some experience of Tube, double Deck buses n London Traffic I suggested him to use day pass and go by Aldgate Tube Station which was close by. 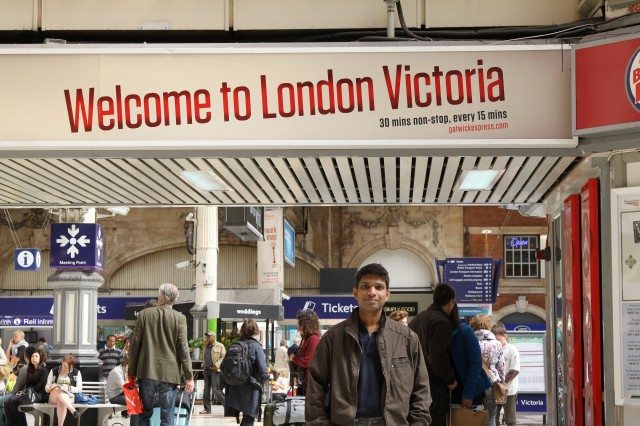 Since we stayed in Commercial London it gave us a feeling of being in India+Pakistan+Bangladesh so we didn’t feel as we are in another country except cleaner roads, rules obeying traffic, big billboards, and sky scrappers. 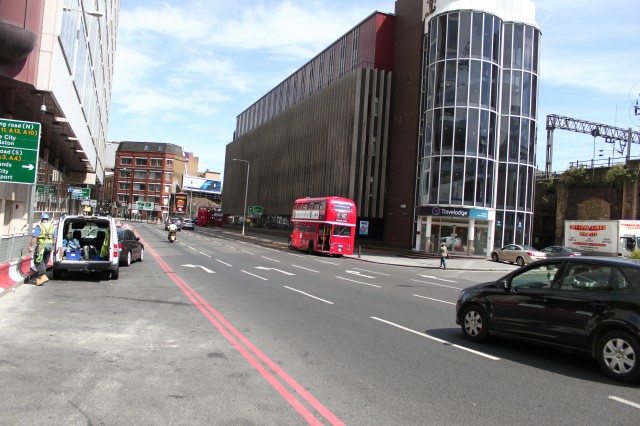 Girish as planned left by Tube, in London its quite convenient to move around the City of London as the tube is connected to all the places and quite affordable too.. Unlike India people are not in hurry to get a seat as soon as Metro stops and give way to others, even while using escalators, Surprising they walk a lot ( and very fast) and for them any place is two to three blocks away and can be covered walking.. Initially I found it difficult to manage but then became used to it (lost some weight during my stay). Girish dropped me to Office and I roughly guided him about must-visit places in London (only those where I had already been to, as never wanted him to visit something new that can question my knowledge about one of my favorite city)

Unlike as I suggested he visited London Zoo to click some pictures. 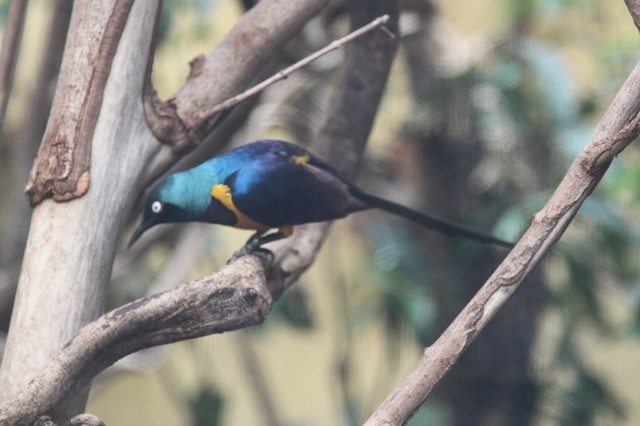 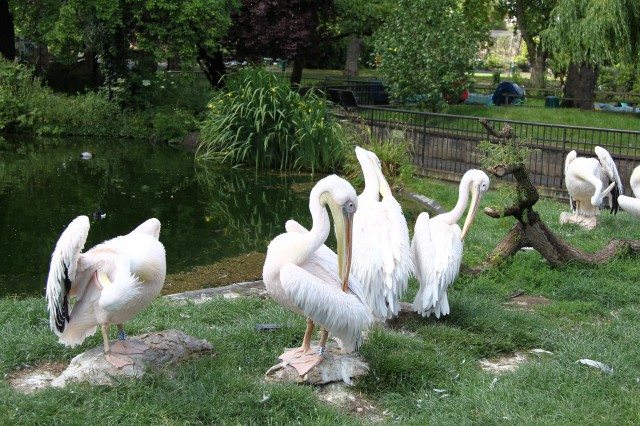 In the evening he came to my office to pick me and after spending 5-10 minutes back in Hotel (as it was quite near to my office) I suggested to visit Tower Bridge, personally I like that place very much.. 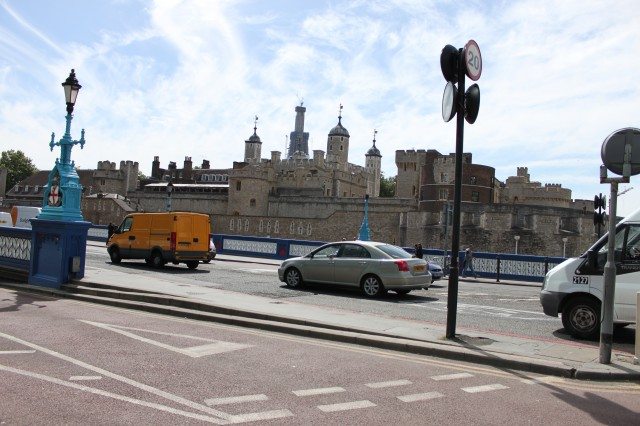 Lots of activity, people cycling to home, reasonable traffic, Sitting besides Thames with colors all around and sipping one of the best beer.. What else we need to spend a lovely Evening in London.. I got some beer for Girish from near by place while he Clicked some nice photographs of those visual treats. 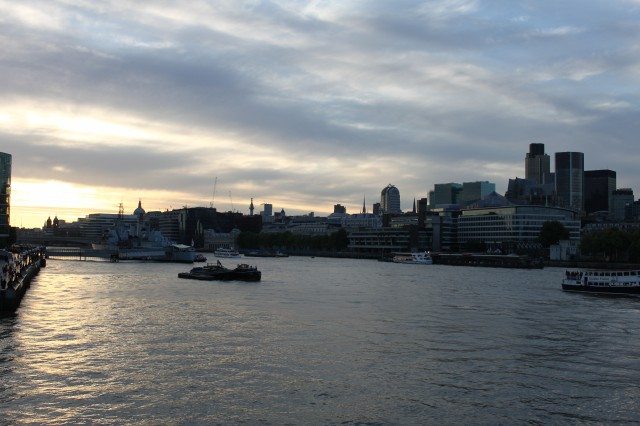 An Evening in London

Trust me if you visit try spend one evening there, I bet it will be one of the most beautiful evening. After spending some unforgettable moments there, without speaking to anyone just enjoying the beauty, we made our way back to the Hotel. Since we stayed in the Brick Lane near White Chapel Galary, it was not difficult to locate an Indian Restaurant. 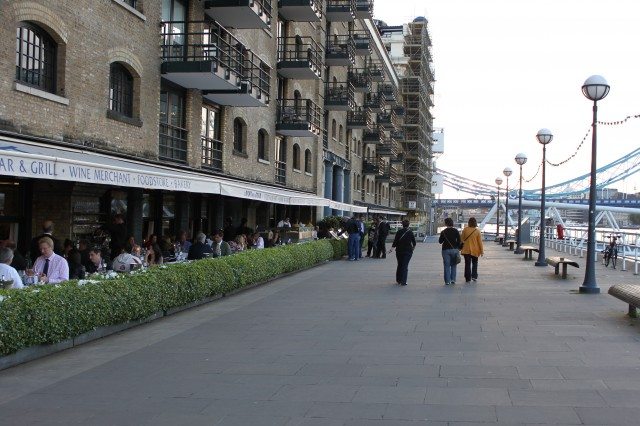 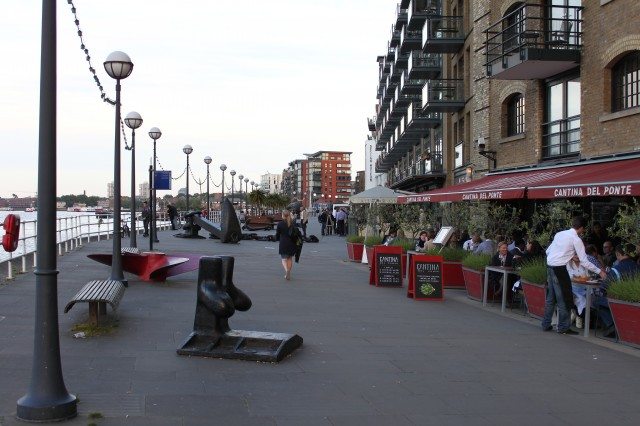 Brick Lane is famous for its Curry Festival and there are many famous Indian Restaurant. We went to ( not too famous) but nice and quite restaurant ” Bundu Khan” run by Pakistaani and tried some Pakistaani dishes, quite flavoursome. 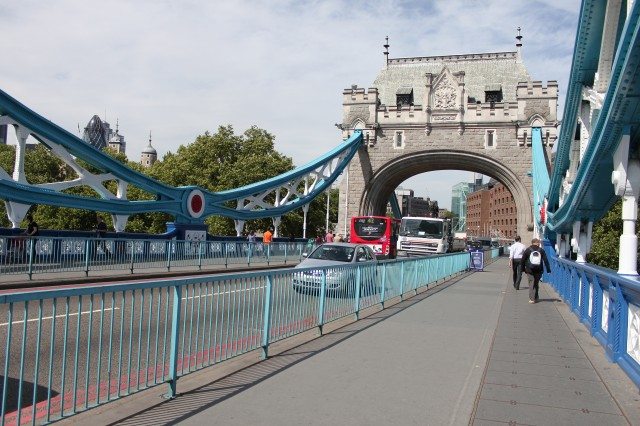 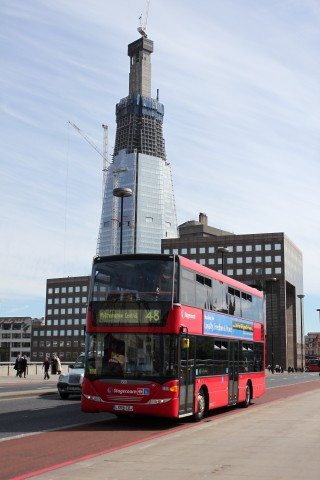 Next day started the same way expect i left early for the office, Girish had a complete day to him to explore more of Londonn, he opted for a Day pass for £ 6 which works for both Tube and Buses. He visited Bakingham Palace with Perfect timing to catch the famous Parade. He clicked some beautiful photos, and was also allowed to go inside with few more tourist to go inside the wall and click some photos (lucky him). 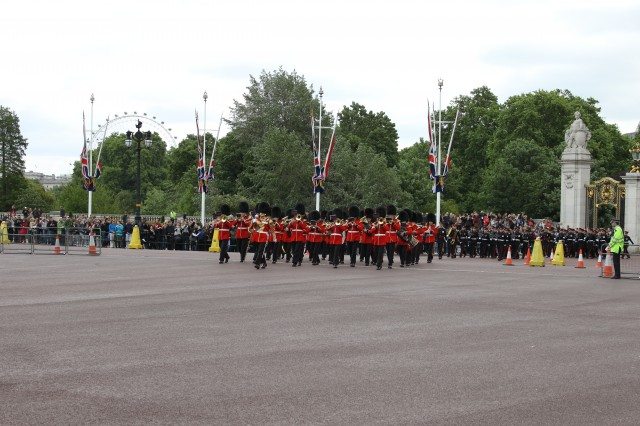 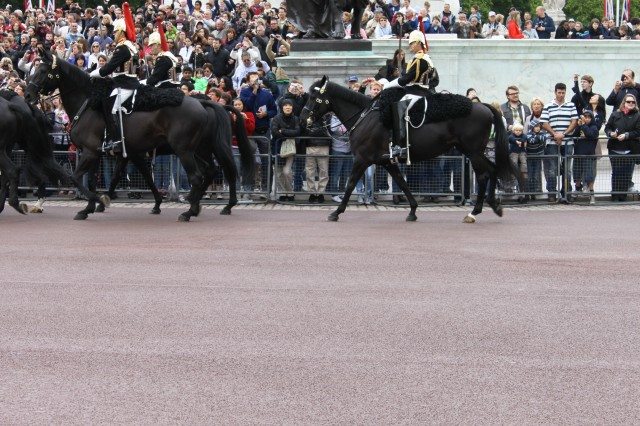 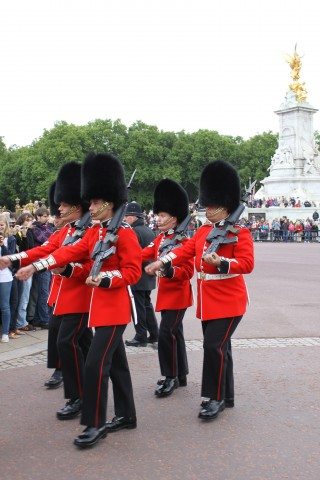 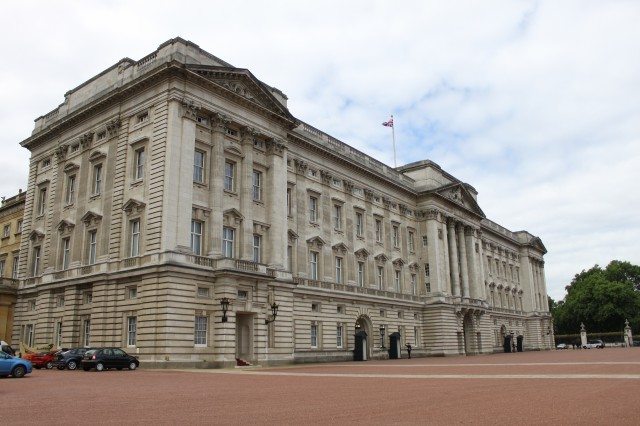 Same as the other day we spent the evening around commercial street, visited Tesco which a reasonable Supermart in London. I bought some heat n eat food as there was no Free food Cafeteria in my London office as in Gurgaon and everybody during lunch goes alone and get there food from any near by restaurant. Fortunately on the first day, I went with one of my colleague on Lunch and thankfully carrying my vallaute as in London unlike India everbody needs to pay for their own food. In Tesco I also got some good wine and beer, but before the gentleman at the counter asked me to show my passport or any other age proof, I was pleased to show as he mentioned that i dont look above 25 so he cant unless I show him any age proof. I took it as complement. 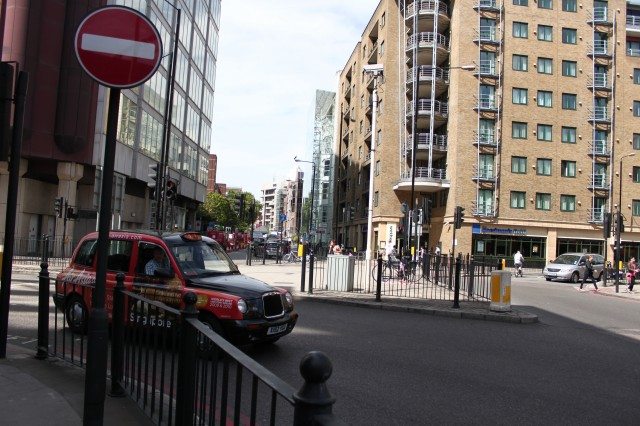 Finally for dinner we went to a Rajasthani Restaurant, time was 7:30, and sun was still shining. I know it wud be Sun light till very late sometimes 9:30 in the evening, which is different but nice. We stayed late as coming Monday was a Bank Holiday in London that gave me 3 day off.

As planned we got up early and through woth the breakfast by 8:30. We left for the Westminster to visit London Eye and bought tickets for London Dougeon ( get better rates if you take tickets for two tourist places together). 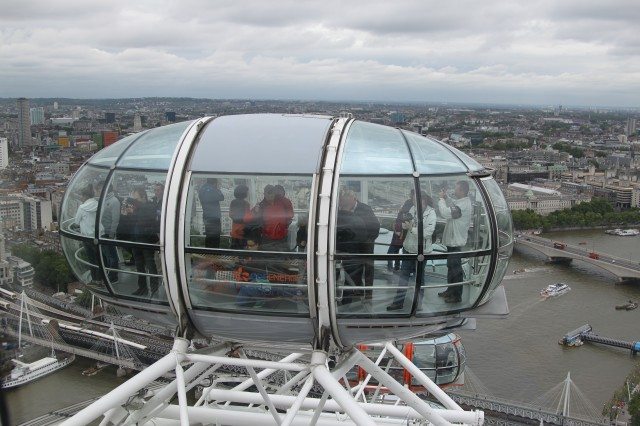 London eye experience was altogether different with all thesecurity checks, you get to whole of the London wide spread around you with so many sky scarrpers and people mostly happy Indians in many of these AC cars clicking photographs. Once down on the road I bought some mementos for my colleagues in Indian. I would suggest not to buy things from places like these, you can get better quality at better rates in shops in the main markets. With a person like me who earn in INR not it GBP everthing seems quite costly. Try not to check the price by converting them into INR you might get a Ache in your heart. 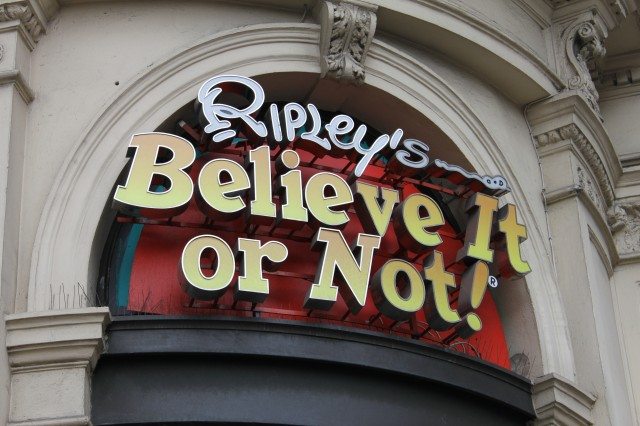 Believe It or Not 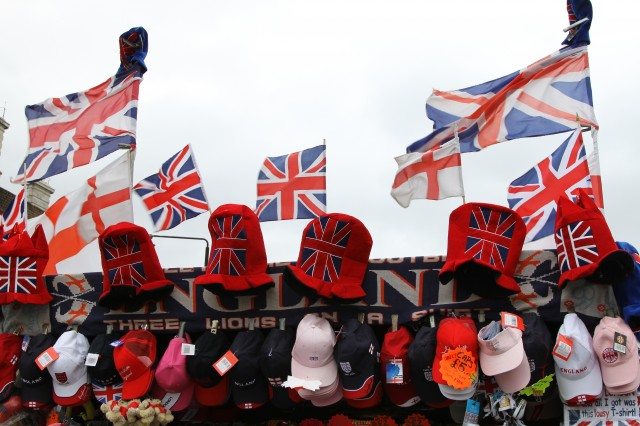 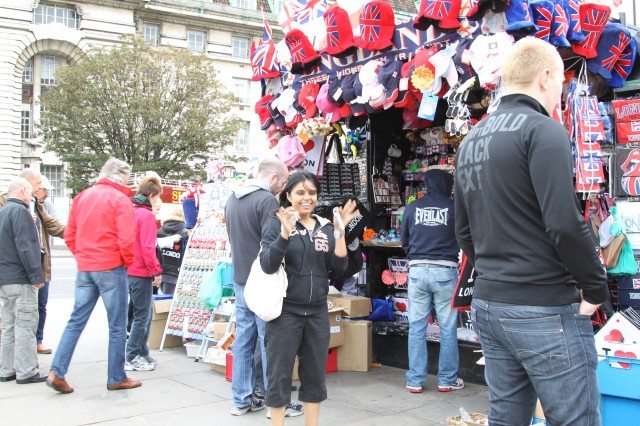 Colorful Souvenirs I- - Buying Some

Then we went to London deaugeon, we didnt like that place much, might be because the horrfying stories they were telling, we could not relate to it.. Better watch Paranormal Activity i would. Quite tired after standing for two hors in a queue during entry, I didnt have much energy to do anything else so spent the time in double Deck bus with no plan just roamed around the city and finally deboarded at Altgate from wbere it was just two blacks to our hotal. After spending some time in Hotel, again vantured out to find a new restaurant for Dinner, this evening it was Clifton’s, which is near White Chapel galary. Dinner was nice with Hindi songs it was truely refreshing. 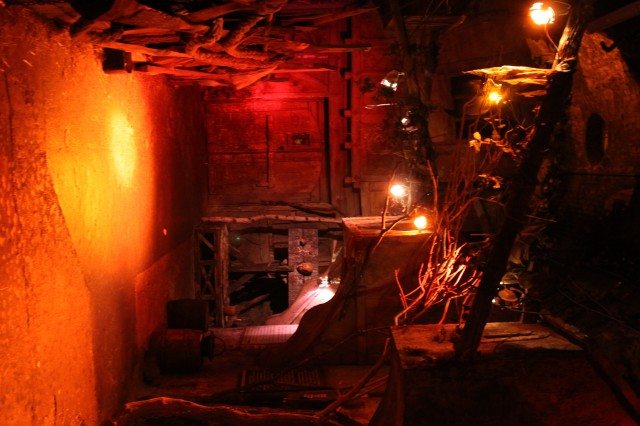 Next Sunday, as I planned was dedicated for shopping, and we moved out again with a day pass to famous oxford street, very first stop was Picaddily Circus. It was during a football championship time and we found many people in London supporting Barcelona Team in cvolorful dresses with drums all around Picaddily. Theses were also the tourist who came to watch the match live in the evening from all around Europe. Quite nice sight. There is not to write about my Shopping experience except my vallaute was almost empty and asked Girish if i can also use his Credit Card, which he graciusly allowed.

Went to Shopping Paradise “Westfield” Mall, this centre is noted for its size: with a retail floor area of 150,000m² (1.615m ft²), the equivalent of about 30 football pitches. At the time of its opening it was reported to be the third largest shopping centre in the United Kingdom (Wiki). 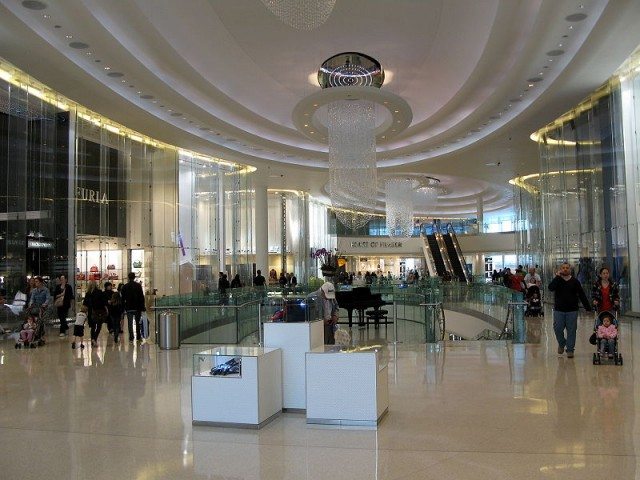 Monday was girish’s last day in London and we planned to visit Bath and Stonehenge. It was add by Golden tours near Victoria Station that arranged our visit and bus was suppose to leave at 12:30 from their main branch at Victiria itself. We had sometime in hand so planned a visit again to Bakingham place which was quite near (4-5 blocks) from victoria, parade was over but tourist were there to make a happy moment to click. 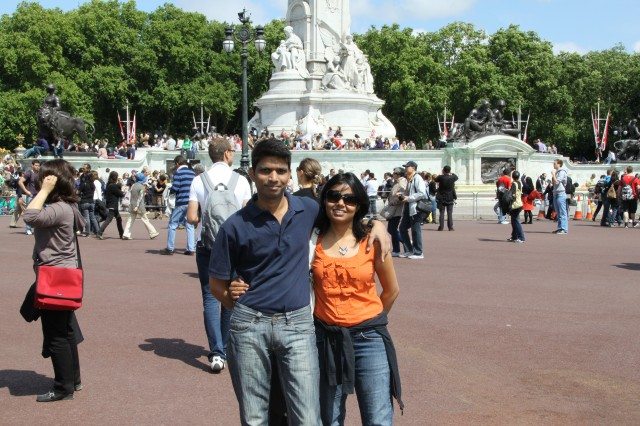 We were back on time to catch our bus, unfortunately, it strted raining when we reached Stonehenge, but we never wanted rain to ruin our moment, so started enjoying the rain. Each of us were provided with a video tape telling sequential history of Stonehenge. as per Wiki “Stonehenge is a prehistoric monument located in the English county of Wiltshire, about 2.0 miles (3.2 km) west of Amesbury and 8 miles (13 km) north of Salisbury. One of the most famous sites in the world, Stonehenge is composed of a circular setting of large standing stones surrounded by earthworks. It is at the centre of the most dense complex of Neolithic and Bronze Age monuments in England, including several hundred burial mounds.” 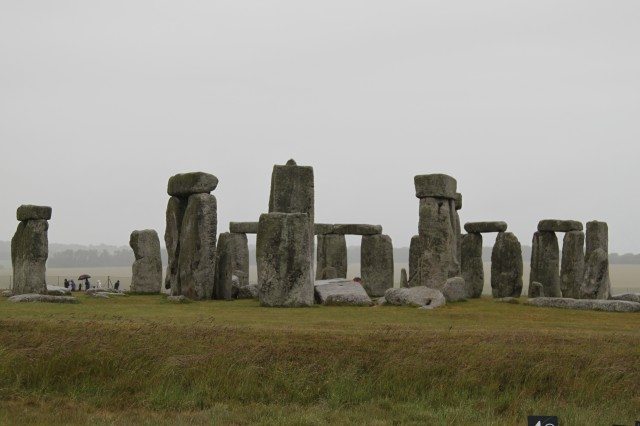 We were back in the evening tired after our visit ti the mystrious place, lost in thoughts about all the stories we heard about that place, returned to Hotel by late night. After dinner we discussed about our trip to London, although I was suppose to stay another month in London but the city seen with Girish was quite different than I had experienced it before. 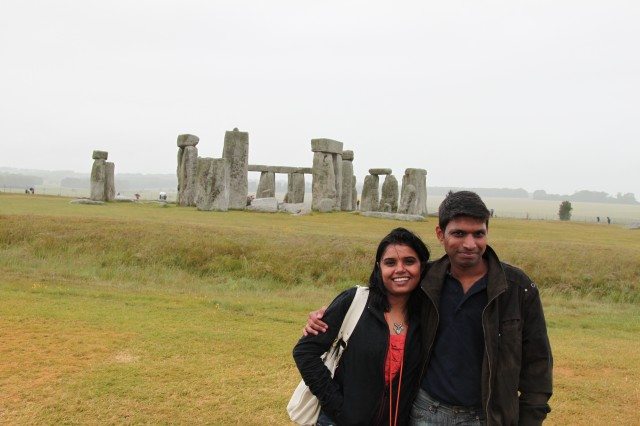 There are many good things about London like cleaniness, services you get… But after all its the people who make any country or city a better place to live in, and undoubtly its India …. And I am pround to be an Indian.. Jai Ho