Self-drive across Europe; that was the original plan, germinating in our Ghumakkar minds for years. Somewhere down the line, though, we developed cold feet. Anxiety about its do-ability, our Europe-driving-worthiness, finances and other imponderables swamped the fickle minds.

A refocusing exercise thereafter led us to Thailand, where we did a self-drive trip during Mar 2012 (https://www.ghumakkar.com/self-drive-trip-across-thailand-7-days-2000-kms-part-1-dreams-delivered/). The trip to Thailand, apart from an extraordinary experience, also provided us with the psychological scaffolding to support the original European dream; or let’s say, the Thai sheek upon which European kebab was skewered :-)

While deep into Delhi winters, we were already dreaming about the forthcoming summers (May-Jun 2013) in Europe. By around Feb’13, the itinerary was finalised and more important issues like finances (how much would Sharmi contribute; would it be in the form of a loan or a give-away, the loan being temporary or permanent; and so on), etc were being settled. It was, both, a trapeze-act with the budget and stretching of the itinerary in a manner that would make chewing gum manufacturers proud.

Does one need dwell on allurement of the destination? Europe – it lies just there; on the fringe of our sense of attainability! It embodies the concept of the exotic, the foreign and supremely, the West.

If that is not enchanting enough, imagine driving across the European countryside and the Alps!

First leg of the flight (Del-Helsinki on Finnair) was pretty ‘normal’. There was a group of college students on their way to Paris, with whom our daughter established a quick rapport. Another group of tourists from Gujarat, seated behind and destined for London were discussing about (what else?) the improvement in Gujarat governance and current gold prices. We were slipping in and out of sleep while admiring the blue nothingness outside during this 7 hrs flight.

Thereafter, a 2.5 hours stopover at Helsinki later, we were on the next flight, Helsinki-Prague. Then came the impact. Soon after the seating, we found ourselves to be the only Indians in the flight. No more faces that we take for granted, no more talks in Hindi/Gujarati/Bengali (not even English) flowing benignly across the senses, no more of anything that has anything to do with Bharatiyata. We were now witness to the process of our fascinating transplantation to the yonder, dreamlike.

The trip to Europe started from Europe. 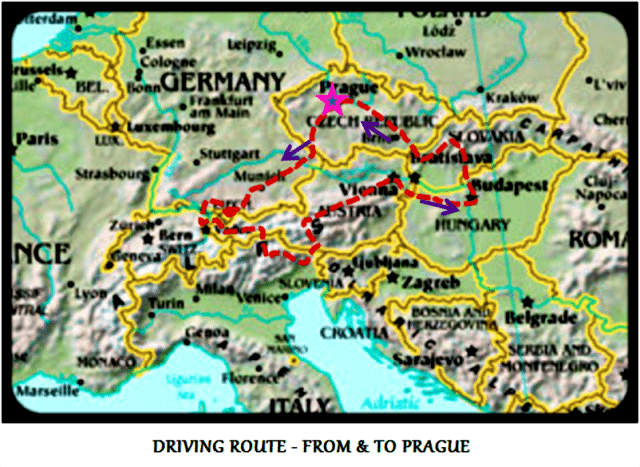 This is how our final plan looked like, covering destinations across eight EU countries. While handing the car back at Prague, we had driven some 2500+ kms for 18 days across a very scenic expanse of central Europe, including some blissful driving experience over the Alps. We also had a day to ourselves in Helsinki during the return flight.

In total, we spent some 25 days across the continent spanning May-Jun 2013.

Certain pre-conditions were decided upon while planning the trip, in order to keep the flavours undiluted, viz. –

1. Self-drive (of course!).   The will to drive across a new place endures.

2. Avoid hotels.    Book in home-stays/ guest houses/ alternative options; any place where we get to interact with the hosts and also locals, if possible. Such stays would also help our finances. Our preference for alternative stay options has also been discussed briefly in the said Thailand post. 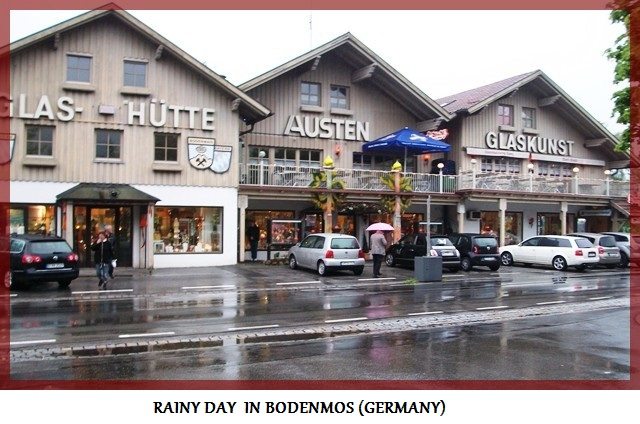 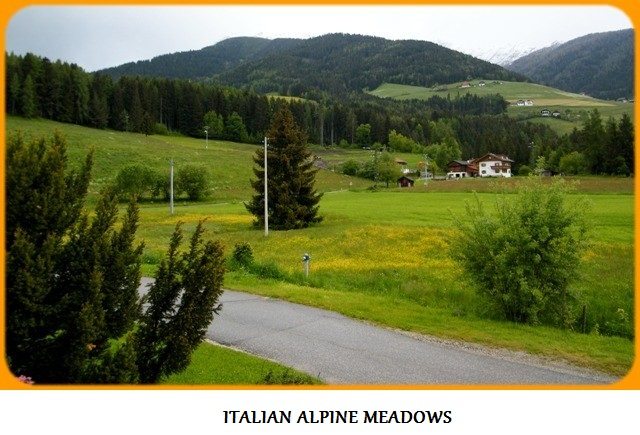 3. Live like locals.    Use public transport and grocers, cook your own stuff and shop from the places where locals do.

4. Balance between touristy and non-touristy destinations. My attempt to keep it totally non-touristy was resisted. After all, what is the point in spending a fortune travelling across Europe and thereafter coming back to talk about places which people never heard of! Therefore, include some known places for the sake of ‘general’ knowledge.

5. When in a destination, avoid the steeplechase to cover all the landmarks. Before departure, short list the ones you would really like to visit. Once in destination, expect to see half of the list; and update it with inputs from others (hosts, guides, other tourists and the locals with whom you strike up conversation in trams/trains/market places etc). 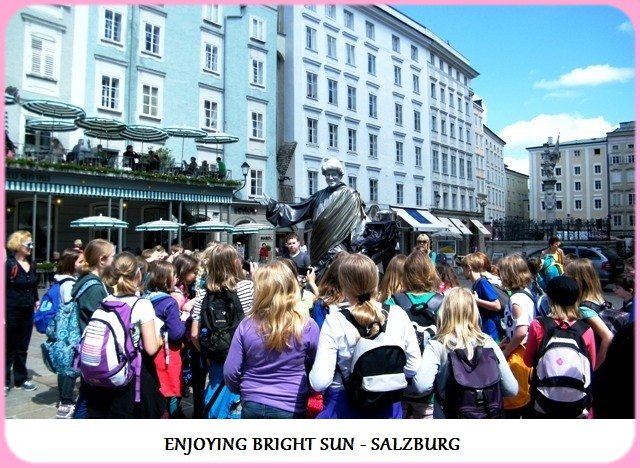 Driving was the high point. It is fabulous, it is poles (continents?) apart from the way we do it, and it is worth every penny spent. Driving in Europe, being so much different from the way we know it here, deserves an independent post. I have covered ‘Driving’ in Part 3 of this series. For the starters, Europe drives on the right. Well, the idea of driving on the right side of the road, by itself, creates abundant possibilities of memories and stories. Doesn’t it?

On our way back from Prague city, the pension owner, Mr Alexander, was driving us to the airport. Jovial and loquacious, he started enquiring about our driving experience in Europe. Soon upon realising that we drive on the left, he started off with his theory on ‘why driving on the left is a stupid rule’, since he was witness to this ‘stupidity’ during his recent visit to London.

After a while, probably thinking that he was too harsh on the left hand driving community, offered us a conciliatory formula, “OK, I have a solution. Why to get on ‘drive left’/ ‘ drive right’ issue at all. Let all the governments say that everyone will drive on the centre of the road. No left, no right, everyone at the centre – shouldn’t that be the most acceptable idea?”

Now that we are back home, having left European sojourn far (probably unattainably so) behind us, whenever there is any discussion about left v/s right, we remember Mr Alexander and his grandiose centrist vision.

In the course of our travel, we stayed in a variety of accommodations, including pensions (an equivalent of guest-houses in Europe, usually family-run affairs), home-stays (where family would rent out a portion of their house while occupying the rest of it), tent (tipi, as it is called locally, located in the midst of Slovak wilderness where Sharmi heard scratching noise on the outside in the middle of night) and an apartment, which was vacated by the occupant for our stay. In many places, we had kitchens to ourselves.

We also had this experience of dealing in more than one currency, viz. Euro, Czech Kroner (CZK), Swiss Francs (CHF) and Hungarian Forint (HUF). All this, believe me, adds to the excitement. At least twice, we were pointed out for paying in the wrong currency. It is more confusing when you deal in coins, for obvious reasons.

In terms of languages, we dealt with Czech (CR), German (Germany, Switzerland, Austria), Italian, Hungarian (Magyar), Slovak and Finnish. English is not in the list here, and that is not an error!!!

English is a point worth keeping in mind. Lesser people speak English in the Continent than one would think, specially once you are out of the tourist circuit. Availability of a ready reckoner for ‘English – to – the next language’ is handy if one intends to spend time in places situated away from tourist cities/ points. 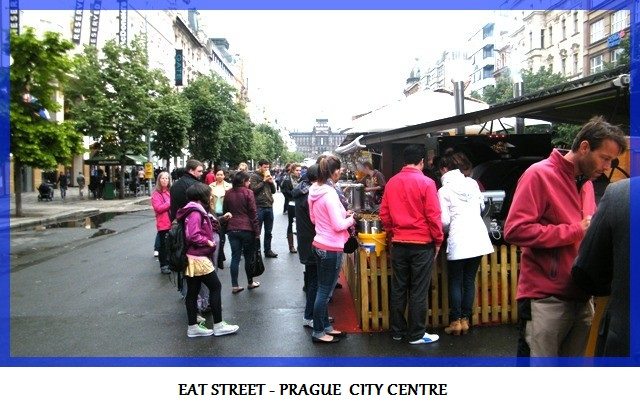 We spent some 2 – 3 months to plan the trip and the process itself was quite fun. The other two members got involved in the game as soon as this ‘Europe – Political’ map (3.5 by 2.5 feet, Vidya Chitr Prakashan) arrived. Pencil lines were repeatedly drawn and erased. We discussed and argued over many issue like route to take (should it be Prague to down south Austria bypassing Germany, or perhaps an easterly route to Poland and then left to Germany?), options for stay (should we stay with Frau Graggaber, who offers farmstay on the outskirts of Salzburg but there aren’t any reviews available; or choose this highly recommended pension in Brixen or the seemingly unknown pension at Terentino …..) and so on.

Here, let me also underline the fact that Ghumakkars can very well plan their own European self-drive travels; rather than depending on travel companies where each detail like itinerary, accommodation, to-do lists, etc is decided by the travel agent. Charting your own trip, believe me, is far more rewarding and satisfying (and economically sound – either comparable or better, than the cost of a package deal). Own planning does need more time and effort, but then that is what Ghumakkari passion is all about.

It was the backwaters of the Hemavathy Reservoir and the monument was the Holy Rosary Church built by French Missionaries around 1860. We met a few villagers on our return who told us that this village was once a lush hamlet where the River Hemavathy flowed watering fields of sunflower.