On Day Four we rode to the Burma Border, which was about 6kms from our resort. Thailand and Burma share friendly relationship. In this border town of Mae sot, Chinese, Burmese and Thai people live in great harmony. A dry riverbed (Moei River) separates Thailand with Burma (now Myanmar) and a bridge connects two countries. It isn’t very often that we get to cross international border on road-I have done that twice- once between Denmark and Germany by bus and ferry, another time between Denmark and Sweden by train. But on both those occasions never got the feeling or crossing the border. Back here, I could see a new country few meters away from me. Unfortunately Myanmar doesn’t give Visa on Arrival for Indians- else I would have tried a quick visit (Myanmar visa processing takes about 3 days-probably I should have planned better) 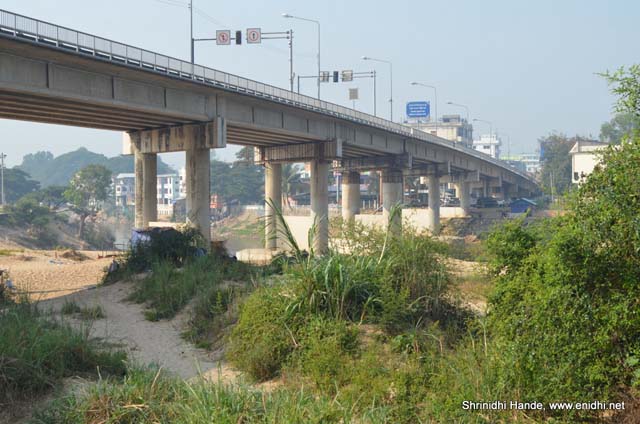 The bridge that connects Burma and Thailand 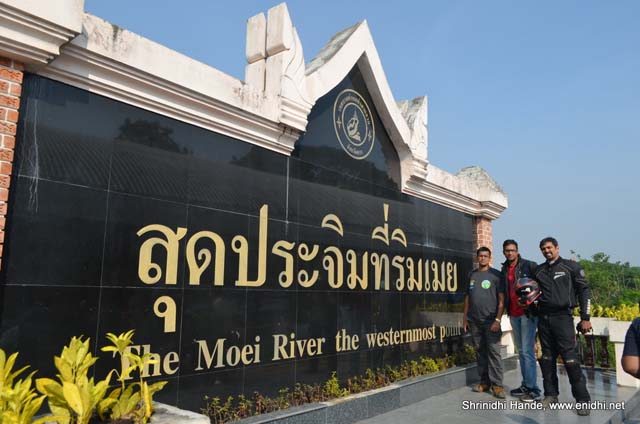 At Moei River with Joshua and Niranjan

Thousands of men and women cross this bridge each day to go to neighboring country for work or otherwise. Those who ride from India to Thailand necessarily pass through Myanmar and enter Thailand here. The border town has a small shopping complex selling all kinds of goods, mostly smuggled ones. It left me thinking, will a day ever come when India will have this sort of friendly relationship with its neighboring countries, instead of needing platoons of army and barbed wires to monitor and protect the borders. 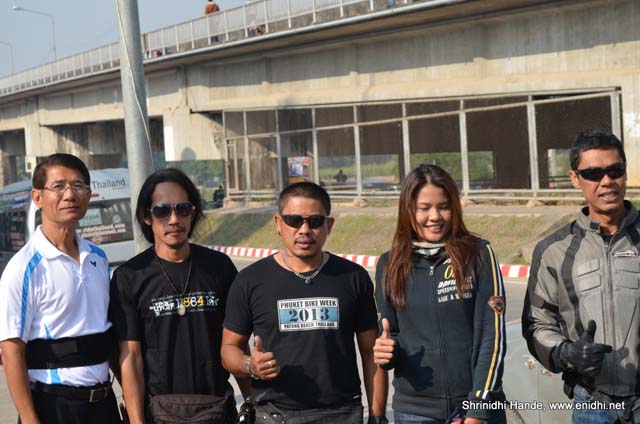 our host and support team

After spending some time at the border, we headed east, towards Pitsanulok. On the way we stopped at Sukho Thai. Sukho Thai is an ancient town and UNESCO World Heritage Site similar to Hampi in Karnataka.  Sukho Thai was former capital of Thailand, till 13th century. Today it houses lots of excavated temples and structures, depicting the former glory.

More about Sukhothai Kingdom may be read from Wikipedia here http://en.wikipedia.org/wiki/Sukhothai_Kingdom 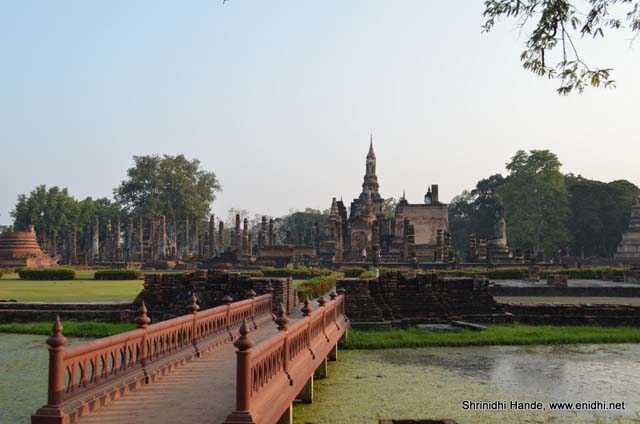 We spent a few hours in Sukho Thai campus checking out the ancient structures which had braved harsh asian weather for centuries and still largely intact. It was evening time and campus closes for tourists at 5.30 and we made our way out. We had another 70kms to reach our destination of the day, Pitsanulok

Day 5 involved 300kms highway ride between Pitsanulok and Suphanburi, but not before spending some time at a popular local temple- Wat Yai or Phra Si Ratana Temple. Wat Yai is a 14th century temple located on the banks of River Nan. 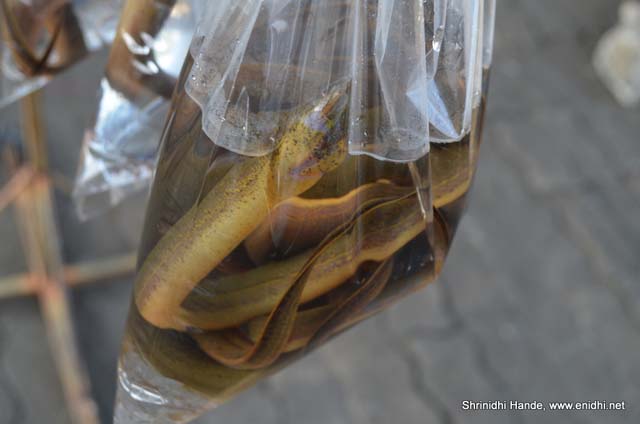 The highway ride was uneventful. The traffic was very low, roads were straight and we cruised in comfort. I logged my highest ever speed in two wheeler, 172 kmph. Our bikes had enough power to reach as much as 185-190 kmph but we weren’t out there to race. We stopped at Nakhosawan for lunch, a riverside floating restaurant. Centuries ago, rivers used to connect most of the towns in Thailand and boats were primary mode of transport. The Ping River by which we had our lunch and the Nan river which passes by Pitsanulok were two main contributors to Chao Phraya River, considered Thailand’s main river.

Post lunch we stopped at a bird park in Chai Nat. Chai Nat bird park is reportedly the biggest in Asia but was partially closed for maintenance during our visit. We explored the aquarium, Egg Museum and the park in general. Though we didn’t spot a great deal of birds, it was good to see the big fishes up close in aquarium, to see peacocks roam around freely without fear. 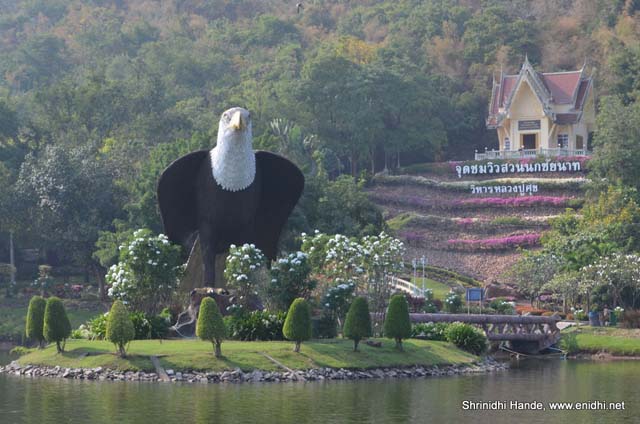 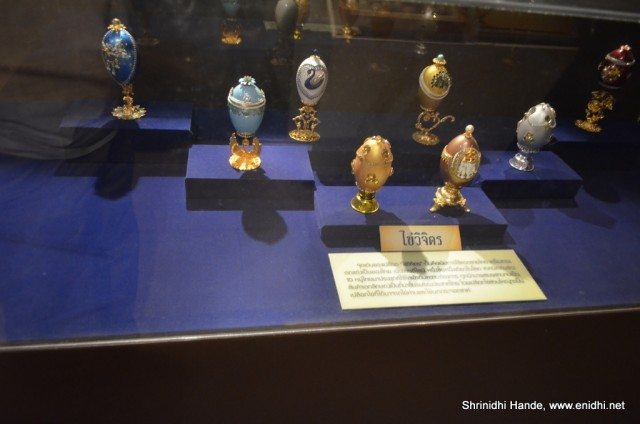 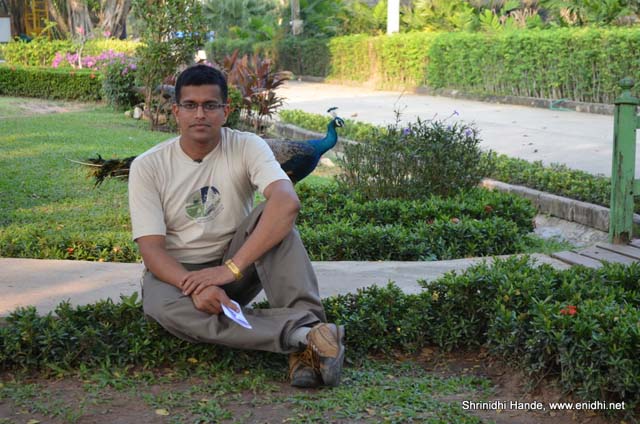 A peacock walks by freely

We ended the day by checking into our hotel at Suphanburi

This was my second visit to Kanchanburi and I was looking forward to take a detailed look at the province. Kanchanaburi is famous for multiple things- the tiger temple, river Kwai bridge, Hellfire pass, death railways, elephant camp and so on. If you ever plan to visit Kanchanaburi, do not plan a day visit. Plan such that you stay here at least for a night.

On the day 6 of our tour, we rode from Suphanburi to Kanchanaburi, again a highway ride of just about 100kms. We started on a relaxed mode, rode easy and reached Tiger temple in Kanchanaburi by 10.30AM. We had an hour+ to kill here, as the temple would open to tourists only at 12 noon.

Wild cats are taken care like pets here, by the buddhist monks and volunteers.  Getting close to a tiger is a good way to overcome fear and understand that animals can be as friendly as domestic pets. But these cats seem to have lost their wild instinct completely, as we don’t get to see any kind of aggression or wilderness in them. Some say they are drugged, but there’s no proof for this. The official explanation is that they are living in company of humans ever since they were small cubs and depend on humans to feed them food, so they haven’t developed natural aggression or retaliatory nature. After a national geographic documentary on this place, tiger temple now attracts tourists from all over the world and venue looks fairly commercialized, with an entry fee of 600 baht (INR 1200+) per person. Tourists get to take photo with the tigers, take them for a walk etc. Additional activities like feeding a cub etc can also be tried at extra fee. 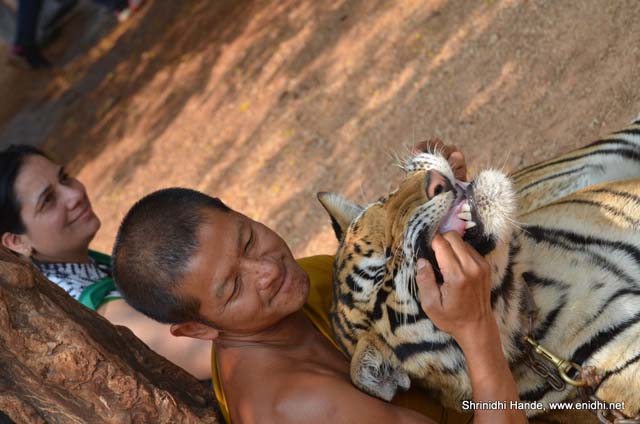 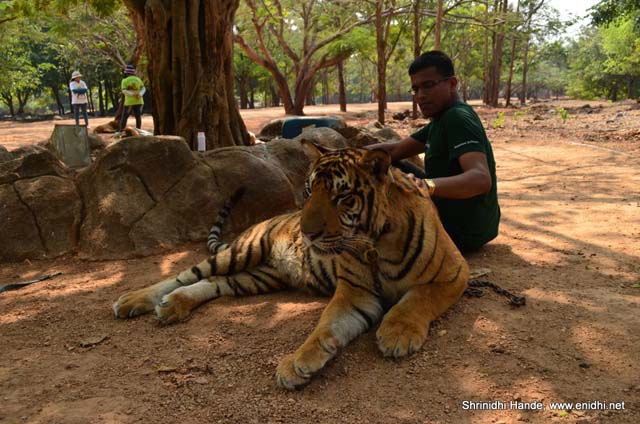 After our brief encounter with wild cats concluded, we headed to River Kwai bridge. River Kwai bridge was constructed under Japanese command during world war 2, to enable Japanese troops to cross across Thailand to Burma and eventually India. Thousands of PoW (Prisoners of wars) were deployed for construction work, without adequate food, rest or medical care. This resulted in deaths in thousands and being alive for one more day was a luxury at that time. Our generation isn’t really exposed to such life and death hardships and all we complain about is traffic, high fuel prices and slow internet. But life back then was very different. A visit to the museum and war memorial will remind us of harsh realities of life in the times of war. River Kwai bridge stands as a testimony to the fact that thousands had to die to satisfy greed of few emperors. The movie by its name, which was pictured in Srilanka has made this bridge immortal. 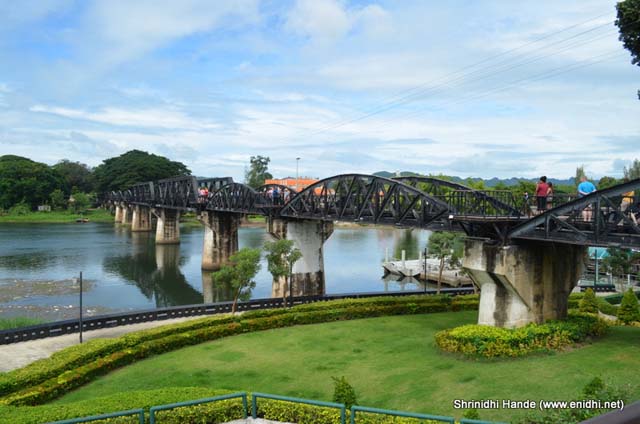 Incidentally an annual River Kwai Bridge festival happens in Kanchaburi between 6th and 15th December and our visit was at the right time. Through a stage play, life of prisoners in the camp and hardship of bridge construction and war was depicted. We observed this from the restaurant of our resort. With real fireworks to depict bombing sequences and adequate commentary, attending this show will recreate history in front of you.

Our last day of the trip and had to make the most of it. I got up early in the morning and went to the historic river Kwai bridge. Managed to get some decent sunrise shots. Early in the morning is the best time to walk around the bridge, as there will not be any crowd. We checked out, spent some time at the war memorial and then left for Bangkok.

Bangkok is just about 130kms from Kanchanaburi and our memorable trip was fast coming to an end. As we reached Bangkok city, we handed over the bikes to the organizers and proceeded towards the Airport. Protests were in progress at Bangkok but that didn’t trouble us much, except a bit of traffic jam. 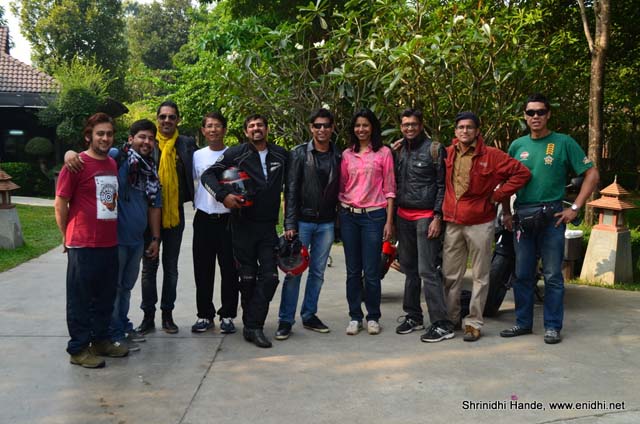 We headed home with a whole new experience to share. Exploring a country on bikes gave us an entirely different perspective and awakened the biker in us. This is an activity to be tried by everyone.

Thailand offers all kinds of bikes on rental- the most expensive Harleys to everyday commuter bikers, to suit your budget and taste. Home country driving license is adequate to ride a bike in Thailand. You can just rent for few days and ride around on your own, or get in touch with one of the several bike tour operators to organize a custom trip for your group, along with guides and support team. Try it out next time, instead of visiting typical tourist places in a taxi or bus. Trust me, you won’t regret it.

Biking across Thailand – Bridge over the river kwai was last modified: September 25th, 2021 by Shrinidhi Hande

I am a Business Analyst by profession and blogger by passion. Blogging since 2006 at www.enidhi.net. I enjoy travel, photography, chess and long drives

Peetambara Peeth is a well known shakti peeth in Datia, Madhya Pradesh. A quick day trip was planned to visit this sacred place by…