The king with his entourage was passing through jungles of Kumaon, when a saint crossed his path. The vain king was offended and soon the saint was brought before him. The saffron clad saint, annoyed with King’s heckles, plucked a leafy branch from a wayside bush and swiped it across the King’s bare arms – it sent the king writhing and groaning in pain, as if a million needles were inserted in his arm. This is how the hymns of Ranikhet started.

In no time, vicious blisters started to appear there. Unable to bear the immense pain, he was soon on his knees, crying out to the saint to forgive him. The saint plucked another piece of leaf and rubbed it across the burning arms of the King. Instantly, the King was relieved and paid obeisance to the saint.

This is not a folklore but ‘AUROLORE’, having originated from my wild imagination. The later part, about that wild shrub and the healing leaf, however, is ‘truth and only truth’. I experienced it in Kumaon!!! How? I cover it in subsequent part of this article.

Visit to Nainital/ Almora during 2009 winters had left us asking for more of Kumaoni Himalayas. The opportunity arrived in the form of an unexpected offer from one of the many benevolent colleagues of my beloved wife (actually, it was her colleague’s via-via-via colleague). The owner couple has recently constructed a cosy villa in Majhkhali, Ranikhet (6000 ft ASL). Being based in Delhi, I learnt, they are not averse to letting it out to occasional tourists looking for untainted Himalayan solitude. I have included their contact details in 2nd part of this article.

So there we were, avidly packing our stuff and ourselves into the car early morning of a mid-March (Anno Domini 2011) day.

The onward route was Delhi – Hapur – Moradabad (take left after Moradabad flyover U-turn) – Tanda – Bazpur – Kaladhungi – Nainital – Garampani –Ranikhet. The route was preferred over the other route via Haldwani, Rudrapur based on my previous experience while visiting Nainital (details of the route, as it was then, can be looked up in my post – ‘Nainital-Jewel of Kumaon’). The decision, though, turned out to be not-so-judicious one.

Starting from Delhi at 6 am (I am happy to announce that we managed to clock that time, for a change, probably because Sharmi’s Pa was there guarding the clock through night), four of us were swinging past Ghaziabad on Hapur highway (NH 24) clicking the rising sun. Roads have since improved, after my last drive on this road. Drive is smooth till Hapur, Pilakhwa, after which you come across patchy roads in the throes of ongoing repairs till Brajghat/ Garhmukteshwar.

The bad roads end the moment one crosses the bridge over Ganges in Brajghat (Garhmukteshwar), after which it is a rather smooth drive all the way till Moradabad flyover. After the flyover, you have two options to go to Nainital/ Ranikhet – first, a left after the U-turn taking you towards Jim Corbette NP, Nainital and further to Ranikhet; and second being a straight drive towards Rampur, Rudrapur/Haldwani and Ranikhet via Sattal, Khairna.

I took the Jim Corbett (Tanda/Bazpur) route towards Nainital. It turned out to be not such a good choice after all – road form Moradabad through Tanda till Bazpur has deteriorated badly (probably 2010 rains are to be blamed). Please avoid the road if you can. The entire stretch, after Moradabad flyover till UP Border, has become potholed; the metal surface being invisible for a major part. Though traffic is minimal and scenery around is quite impressive, condition of the road outweighs any decision in favour of taking this route.

Chugging and bumping along the road, we arrived at Kaladhungi by 12 noon. The roads had improved to perfect metalled surfaces as soon as we entered Uttaranchal borders. 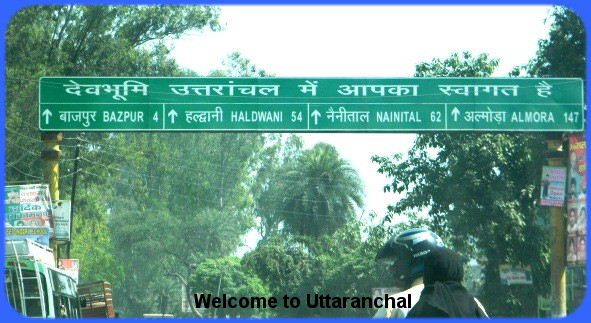 Remember – Jim Corbett Museum is not located in Jim Corbett National Park, but in this serene, lower Himalayan village of Kaladhungi (also known as Chhoti Haldwani). This place is about 35 kms short of Nainital. Kaladhungi, however, is by-passed if Haldwani route is taken. 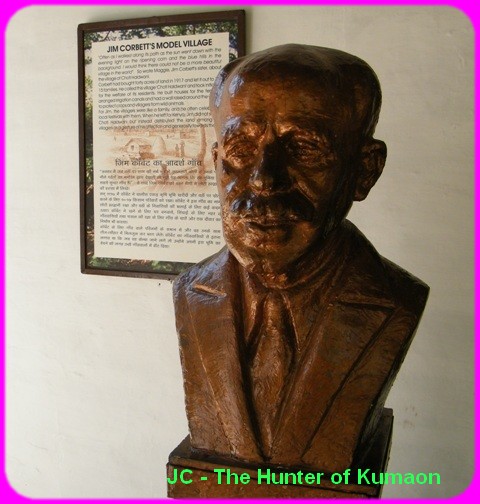 JC – The hunter of Kumaon

The museum is a small but well organized and attractive, worth a visit (about 1 hour will be fine for Corbett initiates), especially if you are a Jim Corbett fan. It was originally Corbett’s second home, where he would come down from Nainital in winter months. The museum preserves his personal paraphernalia and has a number of paintings/photographs/ exhibits with detailed and informative account of Corbett’s activities. 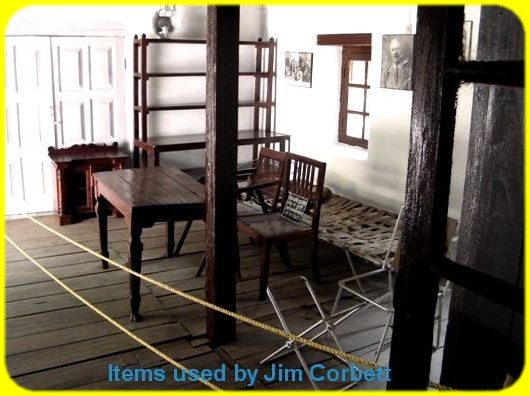 The items used by Jim Corbett 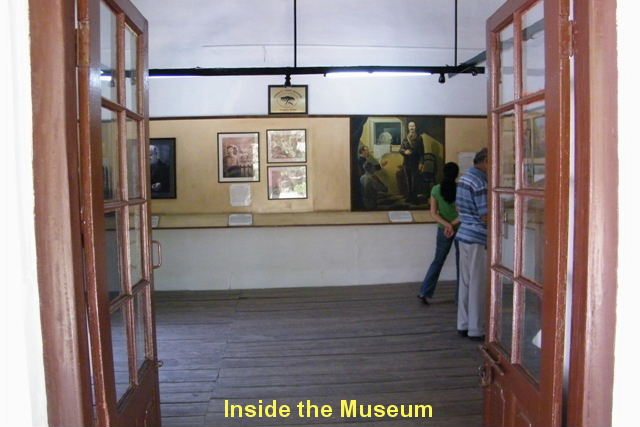 The Story of the House 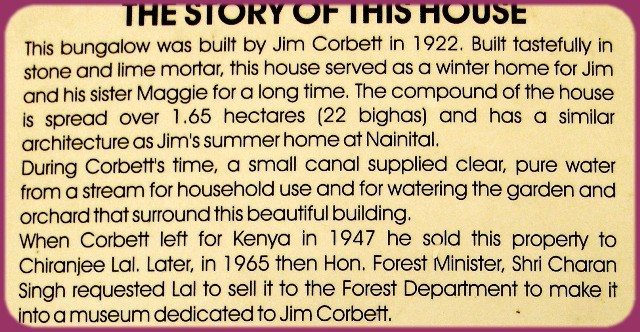 The story of this house

The entire property, of which the museum is just a part, is rather large and guided tours are available within and beyond the estate. Contact number/ details, as shown in the board displayed at the museum, are given below:- 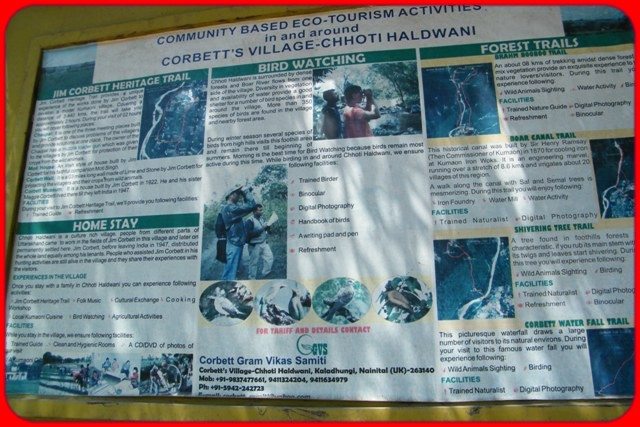 The board mentions that they offer Corbett Heritage Trail, Bird Watching, Forest Trails and Homestay etc. I did not check up on the details, but one can contact the phone numbers, I guess. The Museum compound also houses a Govt owned souvenir shop, which sell local handicraft, juice/squash and other touristy stuff – and of course, James Corbett omnibuses – latest editions.

Having enjoyed the freshening break at the museum, we started towards Nainital by 1.30 pm. We were passing through Nainital Mall Road by 2.30 pm and then took the road to Ranikhet/Almora. Distance between Nainital and Ranikhet is about 60 kms, route passing through Khairna/ Garampani. Road condition is reasonably good, with patches of damaged roads.

We were at Ranikhet by 4.00 pm. After a momo-chowmein break in the main market, we proceeded across the Golf course road and soon we were parked on the road overlooking our villa at Majhkhali. Having given a call beforehand, the attendant was waiting at the roadhead and promptly shifted our luggage to the main building, situated about 100 mtrs into the mountains.

Recommend. Any visit to Uttaranchal is easily complemented with a reading of Jim Corbett. My humble suggestion would be, especially when you are accompanied by children; a read-aloud session of at least one story – it really helps in involving the audience… try it once….

Further on, I will proceed in Part II, being uploaded shortly.

Ranikhet and Kausani : Himalayan Meadows – Part I (The Journey) was last modified: July 21st, 2017 by AUROJIT

Our work got over at 1800 hrs and we were ready to go back to Indore. While returning from Kothi we got down at Freeganj Tower just to roam around the city. First we went to Chote Gopal mandir which was just in the vicinity of Freeganj Tower. The freeganj which was a busy town circle in the afternoon has transformed into a superb eatery zone. Right from Paani puri to Chaat to Chhole tikki to Vada pav to Hot dog to Chinese to South Indian to Juice corner to fruit zone to Icecream corner.