It was still very early morning. I was waking up from an almost non existent sleep. The train moved ahead and surprisingly across too. The doors opened and closed and people moved around constantly. We had our first sleepless night on Pune –Bhopal train. With Bhopal just an hour away, we passed Hoshangabad. With tips from the TC, we glued our eyes to the window glass. It was still much dark but we could make out the train crossing a bridge and vast expanse of Narmada flowing in abundance and bordered by huge rocks. 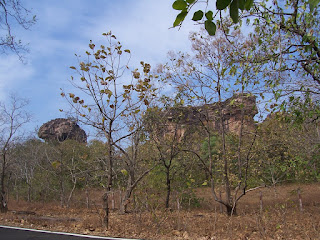 Around 7 in the morning, we were standing on Bhopal platform with the hope that somebody would take us to the hotel. Finally we started walking towards our hotel which was close to the station. The area around the station is I suppose universally filthy at least in our Indian cities. The best part of the walk was the tempting mounds of wafting Pohe and jalebi all around us. We curbed the temptation and checked into the hotel. Next few hours passed very fast as we got ready to explore. 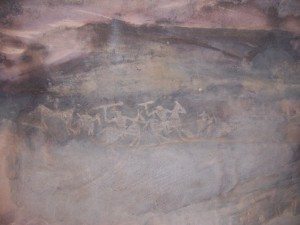 Bhimbetaka, our first stop, the glimpses of its scenic surroundings started accompanying us as we rolled into Ratapani tiger reserve. Rocks with natural hues and structures lying flat across with patches of golden grass, some stray rock mounds rising and to complete the most artistic landscape there was collection of trees and bushes mostly Sal with broad golden pink leaves. Bhimbetka is a group of natural caves in the sea of sandstone boulders inhabited by humans for last 1 Lakh years. The location apart from being picturesque is well suited for dwelling thanks to availability of water and food. In earlier times, the region was watered by 3 streams, all are almost extinct today. The crowning glory is the pre-historic paintings drawn by people who had made their home here. The paintings are line drawings in natural colors depicting animals and human forms. They have some resemblance to the warli drawings which are very popular today. This cave art was discovered by Pro. Wakankar. His curiosity, sheer quest and further immense efforts made it possible for us today to view this piece of history preserved with great care. 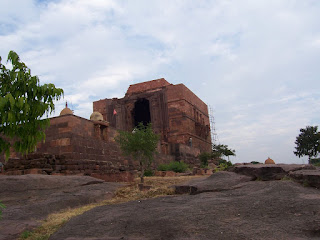 The next stop was Bhojpur the attraction being the massive Shiv mandir. This Bhojpur is not associated with Bhojpuri dialect, that would be the one in Bihar. However this one does have a connection to Mahabharat. Kunti, daughter of King Kuntibhoj is supposed to have given birth to Karna here and then left him to the green waters of Vetrawati, the Betwa today. But again this tale has no physical evidence to support, only the words. In known history Parmar king Bhoj in 10’th century CE ruled this land. He started building the immense structure of the Shiv Temple but could not complete it. What we see today is huge garbhagriha with columns touching the sky. Inside sits the biggest and most impressive shivlings in India. The base of shivlinga is squarish with layered stone giving it elegance and strength together. The temple is on a small hill on the banks of Betwa. There are remains of broken dam wall which used to create a enormous reservoir of water surrounding the hill. So much so that the town sitting on the opposite hillock is still called Mandidweep, memories of island surrounded by sheets of water still intact. It is said that it took 3 years to drain the waters of this dam when it was broken by conquerors. Such a scale and such a grandeur, we were just spellbound! 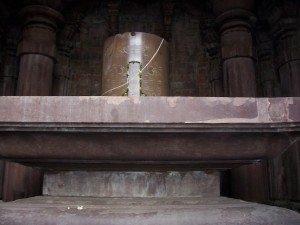 Returning to hotel was like finding way from chaotic traffic of Bhopal. Bhopal at a first glance appeared to be a crowded city lacking infrastructure. A Layer of dust on everything did not help much to that picture. Night followed, looking forward to the journey of the next day….

Since the weather wasn’t too favorable for cycling, we decided to opt for the guided tour. A 6 hour round trip with a visit to the cheese and clog factory plus walk tour in the fishing village of Amsterdam – cant get any better, can it?