A very early morning, jostled out of sleep, washed and bundled in warm clothes, with eyes half closed and ears awake by piercing horn directed at bullock carts… we moved forward to the North. The bus traversed deftly through morning traffic with green fields around providing eye candy. We touched down at Sanchi around 8 AM.
Sanchi is one of the World Heritage Site for a Buddhist Stupa standing tall on a small hillock. This stupa was built by King Ashok in third century BC in memory of Gautama Buddha. It was destroyed after decline of Mauryan rule. However it was rebuilt by Shunga rulers. This is surprising since Shunga rulers Pushyamitra and Agnimitra were supposed to be opponents of Buddhism. Later on Satwahan kings also contributed by building the gateways.

We started the simple climb to the top of the hill and we saw the great site of sitting half dome of Stupa circled by ornate gateways and a solid wall. Each of the four ornate gates was a study of intricate carving in itself. It was mesmerizing to see the life styles of people two thousand years back depicted there. Horses, goats, lions, elephants, peacocks carved in abundance with elegant strokes showed not only the skill of the craftsmen but also the lifestyle. All four gateways are carved with scenes from Buddha’s life. The style of carving is such that flow of the events is depicted as if the events are carved on a timeline. And of course the beautiful Yakshi’s are present on the gateways to support them. Only one gateway has the broken ‘Dharma Chakra’ which has later found its place in our national flag. Also the national emblem of four lions is a gift from Sanchi. In the courtyard we saw remains of a primitive Gupta age temple. No one really knows if it is a temple, since there is no deity but the pillars and square garbhagriha do give an idea of the place. Also little further to the west are remains of a ‘vihar’, a place for monks to stay for study. Sanchi has a great historic importance and is also very well preserved.

I always wonder why some people like me really like to visit such old monuments, be it a temple or, a deserted palace or ‘vihar’ or ‘leni’. It is not necessarily for the high historic quotient but for me it feels like a direct connection to the people of that era. People who walked those grounds, who sat where we sat, who saw the same nature around us and not surprisingly only if we can, we could hear their murmurs. It is an extraordinary feeling that these stone walls have seen them and now they are watching us, it is the passage of time, and the line of life which really touches my heart. No doubt it is great art but it is more important for me to get a glimpse of their life which really is quest of myself, ‘how I was’ or ‘how we were’ in different times. 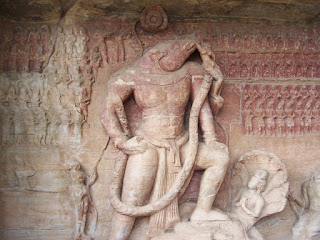 Back in the bus we again merged in traffic to find our way to Besnagar, present day Vidisha. Besnagar is on the banks of Bes river which meets Betwa just around the corner. Udaigiri cave temples are carved in hills during Gupta period (300-500 CE) with a picturesque setting. Greenery around and craggy hills with bushes and trees provide a lovely backdrop for a life carved in stone. Udaygiri caves have a full size ‘Bhu-Varah’, man with mouth of wild boar, one of the Vishnu avatar. The structure is a study in masculine form and posture. There is a Sheshshayee Vishnu of course in sleeping position, poor god behind the bars installed by ASI. The famous non rusting iron pole opposite Kutub Minar was originally from this place and it was exactly at the location where tropic of cancer circles the earth. Carved temple doors, steps, corners with ornate boundaries all basking in sundrops always give a distinct feel to the place particularly when it is a silent corner like Udaygiri, nestled in Vindhya. 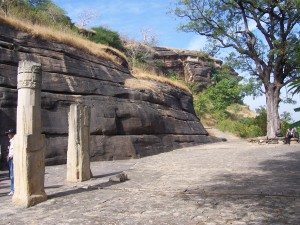 The next stop was a pillar erected by a Greek named Heliodorus who had embraced Bhagwat Dharma in second century BC and this was his tribute. It was interesting to note that this place is now called as ‘Khamb Baba’ . Now in our local psyche it has become a Pillar God who is worshipped. It was sad to see how the significance is lost and a new myth takes over and nobody bothers to correct it. Even the street sign read as ‘Kham Baba’ instead of its rightful name.
Ending our detours, now we headed seriously to our final destination, Khajuraho. Somewhere in the afternoon as we crossed vast open lands of Bundelkhand sparsely dotted with trees and bushes we passed on a strong bridge near Rahatgarh . The Bina river below was completely dry. Never the less the beige sands of a wide riverbed, dappled with cattle returning home, a setting sun and sky turning hazy with backdrop of dwarf hillocks and shelter trees all around looked touching and overseeing the vista was the Rahatgarh fort , far away and fading away.

We walked down to MG Road, and found it is such a nice open place with no-vehicle movement and lots of good eating and shopping options. Such large area for pedestrian and kids were just so happy in running here and there. We should also have something like this in Delhi NCR too; all we have here are malls or congested markets with no place to walk. I found Gangtok a very safe place for girls too.