When the bus arrived at Dharmasthala at 7 am this morning, it was two hours behind schedule. Not that the delay mattered to me because I had a full day to see this famous town of pilgrimage; but it left me a bad impression of private bus services. For once I had booked on a private bus instead of the usual KSRTC. The bus left Bangalore much later than I had imagined. It stopped for an hour near Majestic for loading goods. It developed a technical fault along the way. When the driver ignored it, ever other impatient vehicle on the road was overtaking the bus. Finally, at about 5 am, the driver and the conductor decided to replace the wheel. Nursing a slight neckache, I was half asleep. It seemed like ages before we started moving again. 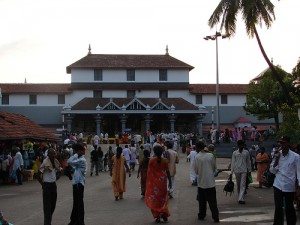 To cut a long story short, there is not much worthwhile to relate about the famous Manjunatha Swamy temple of Dharmasthala. It is yet another name of the same God pulling in the same crowds of believers. It is yet another busy place of pilgrimage where darshan is just a few seconds and prayer is secondary to traditional Brahmanical rituals. It is yet another reason to doubt the greatness of Hinduism.

Nonetheless, to appreciate Dharmasthala, a long story must be kept long. The experience of a whole day cannot be lived in a few hours. When thoughts mature and impressions are laid bare, time will have its rightful say.

I can never say with certainty if I have been here before. When I was a student in Mangalore, one of my teachers planned a trip to Moodbidri, Dharmasthala and Kudremukh. I can remember visiting Kudremukh and stopping at her house in Moodbidri for some idlis. I have no recollection of visiting Dharmasthala. This is where childhood memories become hazy and facts are hard to separate from imagination. For years I had a recurring dream of being in Dharmasthala, witnessing pilgrims and devotees eating off banana leaves in packed dinner halls. There was this idea that at Dharmasthala food is served all day to a continuous stream of pilgrims.

The first fact is that food is not served all day. Two meals are served at specific times. Meals are simple and clean. The dinner hall is bright, spacious and clean. Steel plates are large and spotlessly clean. Rice is served generously. Vegetables are limited or nil. Basically, carbohydrates and some proteins, not much of vitamins or fibre. It’s a good occasional meal but I doubt people can survive on this alone in the long run.

Pilgrims sit cross-legged on a slightly raised platform. A volunteer wheels a trolley filled with plates along the corridor. You have to pick up your plate before the trolley moves off. For dinner today, dried and stitched leaves were used instead of plates. Service is quick and mechanical. There is no time for questions and answers. Curiously, rice and rasam are served first, along with a few spoons of a vegetable side dish. When you are just about finishing all that rice, more rice is served followed by sambar. Before you can say no, the plate is full. When you are still at it, trying your best not to waste all that free food, buttermilk is poured on top. So you are left with a broth of an eclectic mix. I was enjoying the meal and more the experience of how thousands of pilgrims across India fill their stomachs.

Following the steps of an Indian pilgrim isn’t just about free food. It’s also free or almost free lodging. Rooms are organized in three or four floors, in individual blocks. I was given a room on second floor in a block named Godavari. It was basic with mattress and pillow without sheets. I had to use common toilet facility on the ground floor outside the block. The toilet was clean probably because there was ample water supply to flush after every use. Since there was no bathroom, I had to use the same toilet as the bathroom. The toilet is no more than 6’x3′.

The temple has a unique architecture, not typically South Indian. There are no pillared corridors, maha mandapa, kalyana mandapa or gopuras. I don’t know the history of this place, who built the temple or when. It does look like the architecture has been influenced by non-Hindu sources, perhaps Jainism which was once popular in this region. The design is minimalistic. It has a calming effect on your mind. Clean white walls are punctuated by windows with simple grills and shutters. There is no excessive ornamentation anywhere. The red-tiled roofs and projected gables offset in colour the white walls. Roofs end in striking eaves. Roof corners project out like a hooded cobra. The main roof is topped with metal pinnacles, an element common in many Indian temple architecture.

On the inside, photography is not allowed. There are lots of notices about what to do and what not to do. I read with amusement the following:

Though I was wearing a T-shirt, I gave the temple authorities and the officious security guards the benefit of doubt. Sadly no one seemed to notice my rippling muscles. The fact that I was sandwiched in the long queue between two middle-aged, overweight, married and orthodox South Indian women did not help.

The inner courtyard is surrounded by a wooden perforated structure. This structure is covered by thin sheets of silver. This is an interesting structure when sunlight plays hide and seek through the holes. There is not much I can say about the deities enshrined. It was all too brief and too far. You need not pay anything for darshan; or for listening to the musicians on their nadaswaram and thavil; or for watching the long queue snake and snail around the inner temple; or for witnessing devotion and expectant looks on the faces of these pilgrims; or for seeing the very spiritual soul of India. 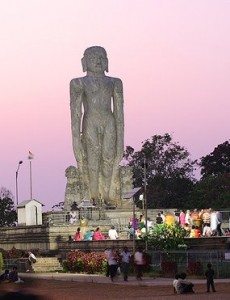 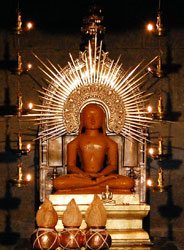 There is much more to Dharmasthala than this temple:

All in all, Dharmasthala is a pilgrimage town. When you arrive, you will see a wide road leading towards the temple at the far end. There are not that many houses here. Everything here caters for the wandering pilgrim. There appears to be no business on its own except one that depends on the temple and the pilgrims. Pilgrims come. Pilgrims go. At 9 pm, the place is still thriving. The bustle of a pilgrimage town is something to be experienced.

In a Religious Town, Dharmasthala was last modified: September 20th, 2019 by Arvind