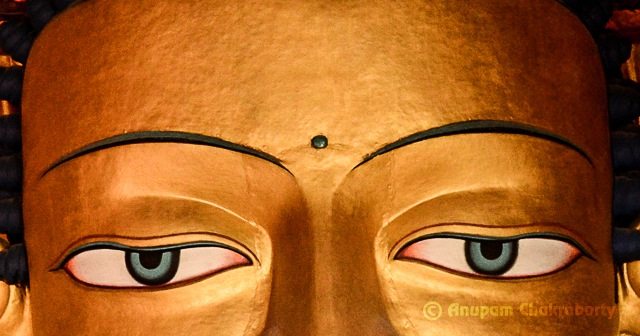 Welcome to the land of high passes and mystics. Enter and explore the land of endless discovery. Step into the roof of the world- Ladakh. Ride to this Bikers’ paradise, drive through its high passes, pass through the towering mountain ranges, river valleys and high plateaus. Come to this land of  magical blue skies and lakes where you will be greeted with JULLEY.

JULLEY means greetings, hello, goodbye and thank you. So before this journey begins I say to you,

Now let’s begin the journey. Yes it starts with this prologue. For me, the journey actually began much before I stepped into the land of Kashmir to enter into Ladakh.

The Chinese philosopher, Lao-Tzu, said, “A journey of a thousand miles begins with a single step.” It is true for travelling to the top of the world, Ladakh! The first step undoubtedly would be to know a little bit about Ladakh.

It started, for me, four months before I actually travelled the region- through numerous articles, blogs and travel stories. Before going to Ladakh it was much essential for me to know about the places to go and activities to do in Ladakh, its history, culture, religious institutions and the mystics.

During 17th century Ladakh became recognized as the best trade route (popularly known as Silk Route) between the Punjab and Central Asia. It was generally a two weeks journey on foot or horseback for travelers (merchants and pilgrims) to reach Srinagar, Kashmir from Leh. However, reaching there at lesser time was also possible by riding almost continuously with changes of horses all along the route. And it took about two months to carry goods for trade from Amritsar to the Central Asian towns of Yarkand. Traders from Kashmir and Punjab hills would prefer to traverse the Srinagar-Leh-Yarkand-Kashghar-Kokand route.  (reference – http:// asiecentrale.revues.org/429). Leh was the half-way mark on this long route and thus it developed into a bustling trade centre.

Ladakh is located in Jammu and Kashmir and borders directly with China and Pakistan. Post independence, ‘Baltistan’ which was a province of Ladakh went within the territory of Pakistan. The old Kingdom of Ladakh lost even more. A portion of north-eastern part of Ladakh bordering on Tibet was annexed by China after military clashes with India which is known as Aksai-Chin (land area 37,555 km²).

Since 1974 only Ladakh has been opened for tourism!

Ladakh is the land of high mountain passes. ‘La’, means pass. So name of all the passes in Ladakh end with the word ‘La’, namely, Zoji-La, Namika-La Top, Fotu-La Top, Chang-La Top and Khardugn-La Top. While Zoji-La, Namika-La and Fotu-La Top falls on the Srinagar-Leh highway, Chang-La Top falls on the way to Pangon Lake from Leh and the world highest motorable road at Khardugn-La Top falls on the way from Leh to Nubra Valley. Among others, these are the most popular high passes in Ladakh and every traveler loves to have their snap with the summit signs at these passes. 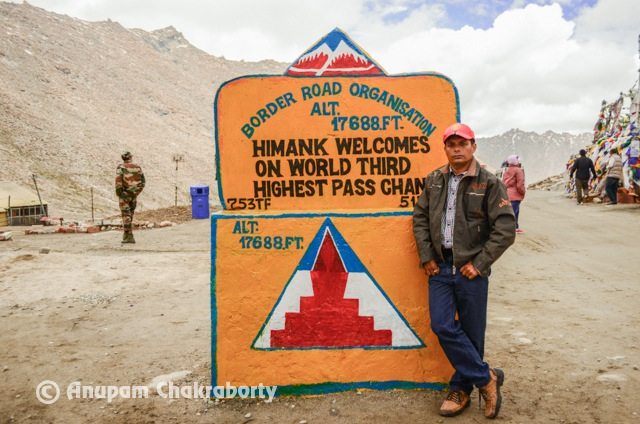 I am on World’s Third Highest Pass ChangLa

Ladakh is the highest plateau with much of it being at an altitude from 9800 ft to 25330 feet. And one, at these heights, is really on the roof of the world!

Ladakh is also the land of Stupas and Monasteries, Prayer Wheels, Mani Stones and Prayer Flags. The prayer flags flutter high above on mountain passes, monasteries and houses. They are also spanned from one treetop to the next. It is a common sight throughout Ladakh. Prayers and auspicious symbols are written on the prayer flags and are fixed at horizontal or vertical so that they have maximum exposure to wind and flutter at every blow of wind. It is believed that the flags fluttered by the wind carry the prayers, mantra and wishes written on them to Lord Buddha. 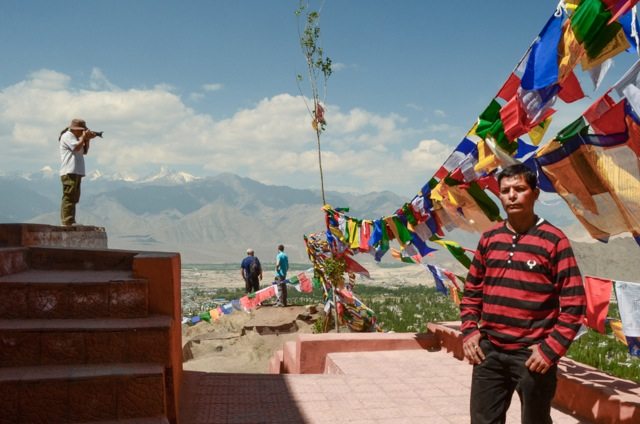 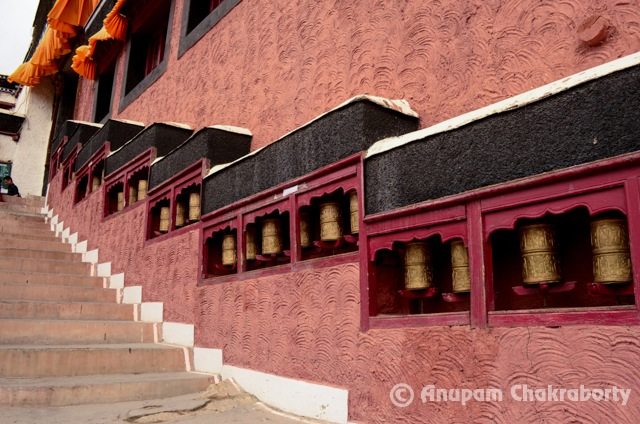 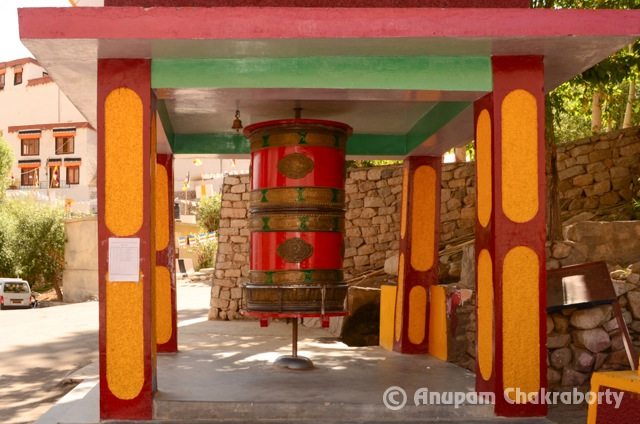 I saw Stupas, known as Chortens, lined up in a single raw at many places. Stupas are shrines containing relics of some religious significance. Most of them are painted with white colour though I saw some colourful Stupas in some places.

The monasteries (also called Gompa) give Ladakh its unique flavor and beauty. Ladkah is full of colourful monasteries; many of them were set long long ago, Lamayuru monastery (on the way from Kargil to Leh) dates back to the 10th century. Typically, most gompas were built on mountain cliff overlooking the village. Each monastery, small or big, has a central courtyard where ceremonies are celebrated or yearly festivals are celebrated. A gallery is generally built around the courtyard for the audience to sit.

Central Courtyard inside the Monastery

I saw beautiful wooden doors decorated with ancient doorknob and tassel that took me to the inner sanctum (prayer hall) of the monasteries. In each monastery, I saw a big Drum, rows of colourful wooden pillar, low height reading tables and many statues of Buddha and deities of Buddha. 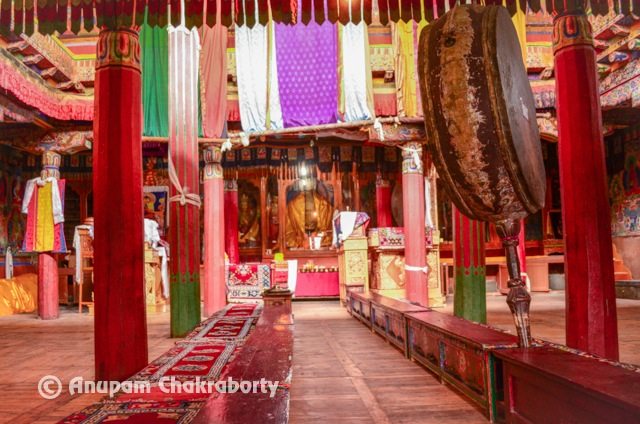 Inside the monasteries, the walls are decorated with Murals (Murals are wall painting depict social living, the development of religion, historical tales, local conditions and the customs of Tibetan Buddhism), Thangkas (Thangkas are Tibetan silk paintings with embroidered borders, usually depicting a mandala, or Buddhist deities) and Frescos (Frescos is a technique of Mural painting executed upon freshly laid lime plaster). 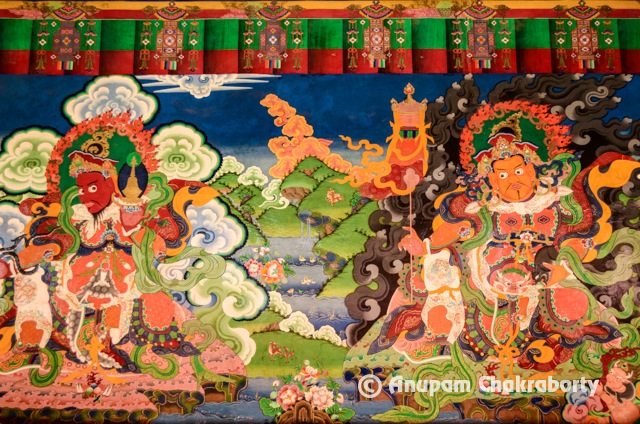 Mural on the inner wall of monastery 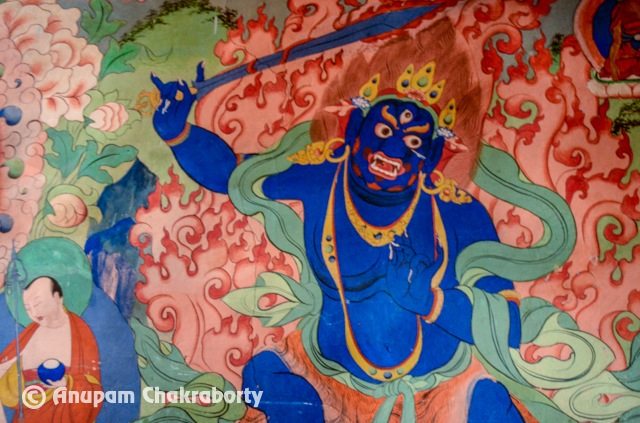 In some of the monasteries I have also seen a collection of precious manuscripts, and colourful masks which are used for ceremonies and festivals and are fixed on the wooden pillars.

I saw piles of Mani stones in the monasteries; they are stone plates, rocks/pebbles, and inscribed with the prayer mantra “Om Mani Padme Hum” of Avalokiteshvara, hence the name “Mani stone”.

Avalokiteshvara is one of the more widely revered Bodhisattva (a person who is able to reach nirvana but delays doing so through compassion for suffering beings). He is revered as the ideal of Karuna, the Bodhisattva of Infinite Compassion, portrayed in different cultures as either male or female. Avalokiteshvara is the earthly manifestation of Amitabha Buddha (a celestial Buddha), represents mercy and wisdom.

By the name “Buddha” we commonly get the image of Gautam Buddha in our mind. Yes, he is one of the historical Buddha. He belonged to the clan Shakya and hence is revered as Shakyamuni Buddha. Apart from him there have been Buddhas in the past namely Kashyapa and Dipangkara – the historical Buddha. “Buddha” means an “awakened” or “enlightened” one who has discovered true wisdom and attained nirvana (the cessation of desire) in this world.

It is believed that 5,000 years after Goutam Buddha left his physical body, Maitreya Buddha will be born in the city of Ketumati – in present day Varanasi. He is also known as Buddha of future, Lord Maitreya, Happy Buddha or Laughing Buddha.

I also saw in many monasteries Buddhist Goddess in green and white known as Deity Tara, the goddess of universal compassion. According to Buddhist tradition, Goddess Tara was born out of the tears of compassion of the bodhisattva Avalokiteshvara. Legend has also that White Tara born from the tears of Avalokiteshvara’s left eye and the Green Tara born from those of his right. 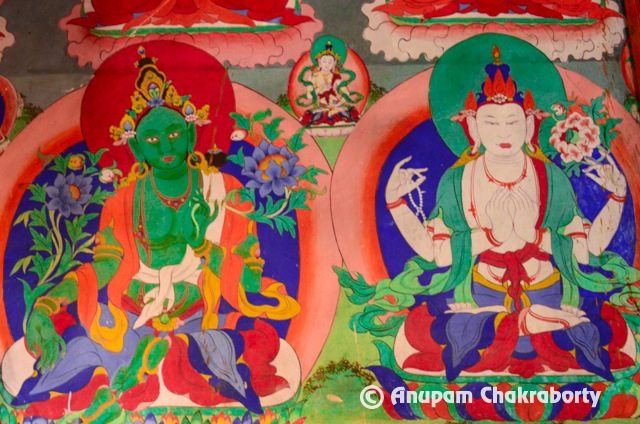 Another important statue that I noticed is that of Guru Padmasamvaba who established Mahayana Buddhism in Tibet. He was a saint and an outstanding member of the then popular Tantrik Yogacharya School and a resident of Nalanda in India. He is considered to be the great teacher in Tibetan Buddhism. Guru Padmasambhava also visited Sikkim on his way to Tibet in the 8th century. And today, he is deified and worshipped as the “second Buddha” and is also called Guru Rinpoche or “the precious Guru”.

After visiting Ladakh I could understand what the Kargil War was. A War Memorial is set up at Drass on the way from Srinagar to Kargil wherefrom I could actually visualise how difficult it was and how the Indian Force fought the war. 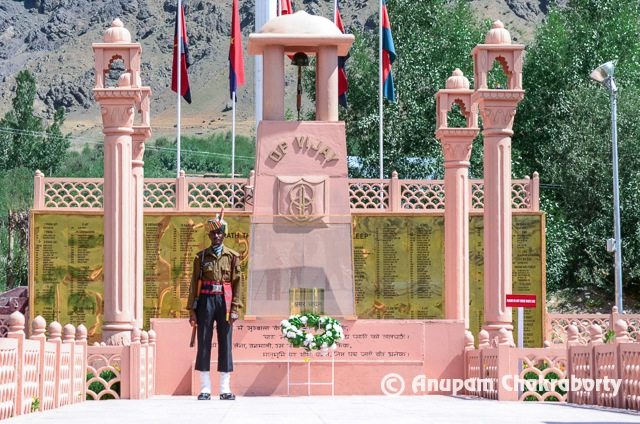 Every traveler dreams about Ladakh. They always take the name of Ladakh with a wow! The reason is well known and it is the landscape! 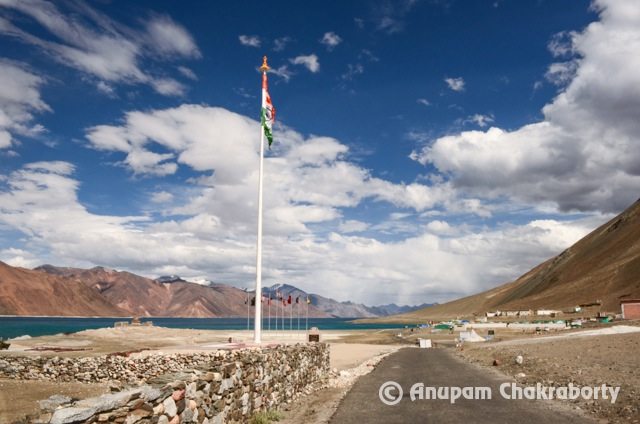 But visiting Ladakh is not only going to its magnificent blue lakes, watching its incredible blue skies, or passing through its high passes. It’s also about witnessing a lost kingdom, finding a lost moment in time, visiting some old monasteries and knowing something about Tibetan Buddhism, experiencing yourself in cold desert at a very high altitude, enjoying Bactrian Double Humped Camel Ride on the Sand Dunes of Nubra Valley, and also to see the Great Himalayan and Karakoram mountain ranges and the upper Indus River which gave our country its name. 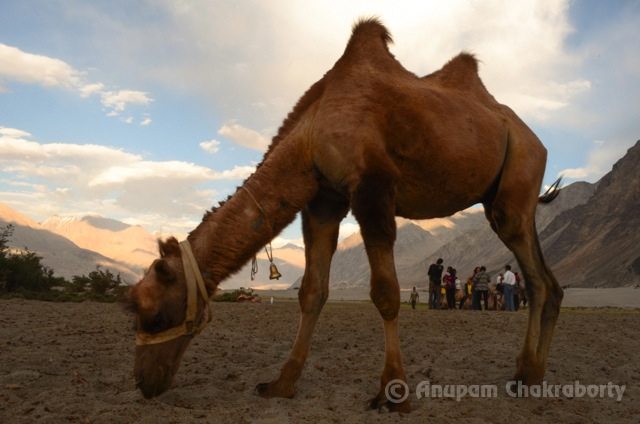 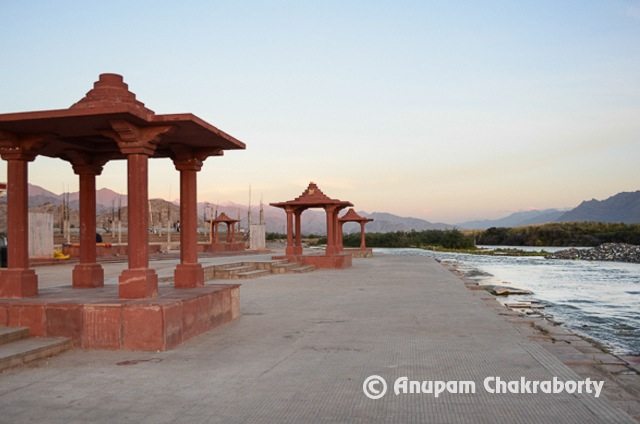 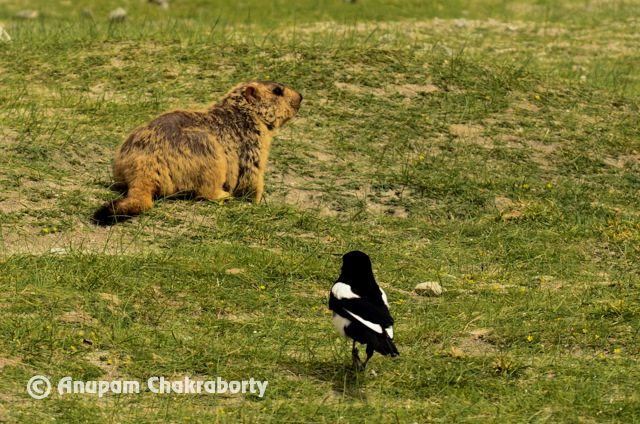 And of course it is also about the Ladakhi Butter tea that I loved the most.

Come! Travel with me – ‘Ladakh’ in my coming travelogues which will follow this post soon. Till then –