After visiting Udaipir we headed towards the UT Daman. The distance from Udaipur to Daman via Ahmedabad, Vadodara, Surat & Vapi is around 600 km on NH-8’s excellent tar, a 9-10 hours journey including one hour break. We decided to start by 7 am to be on the HW without much hassles and so we did. On the throughout 4-lane, driving was a delightful experience especially when you compare it with driving around Delhi-NCR.

Soon we were back on the brilliant NH-8 through the Ghats with so much of greenery that never for a moment we realized of being in Rajasthan so far. This part of the state is far much greener due to sufficient rain and water reservoirs both natural and artificial, supported with the charming ghats of Aravali range to an extent. Our excitement accrued when it suddenly started drizzling leaving the space around fresher and greener, wet with the fresh water. Only drawback was slowing the pace for enjoying the cool moist breeze carrying fragrance of soil, on sliding down the window panes, added few extra minutes reaching Daman however, the nature’s gift in bargain was much worth.

Leaving the greenery of the ghats, we were on the arid plains when we caught sight of an old fort looking structure near Dungarpur far on the right, on top of a hill, probably a part of the Dungarpur ruins but my extra zoom camera easily brought it closer in the frames. Further, soon we found an almost abandoned check-post, followed by a fort shaped gate mentioning end of Rajasthan border and a big sign board welcoming in Gujrat. A spontaneous thrill exhilarated the enthusiasm, realizing the fact that we are actually doing the unusual long journey and already drove so far. I recalled at this point, of the recent brilliant post on Gujrat by Mr. Rakesh Bawa and expected a scheduled check before checking in to Gujrat. To my surprise, despite of a Delhi plate, none bothered us and to add on this, it never happened in my 6500 km drive to almost every nook and corner of Gujrat by crossing its borders many times. 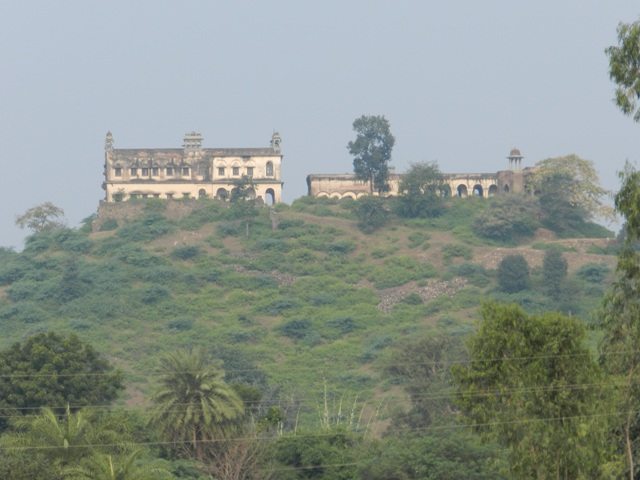 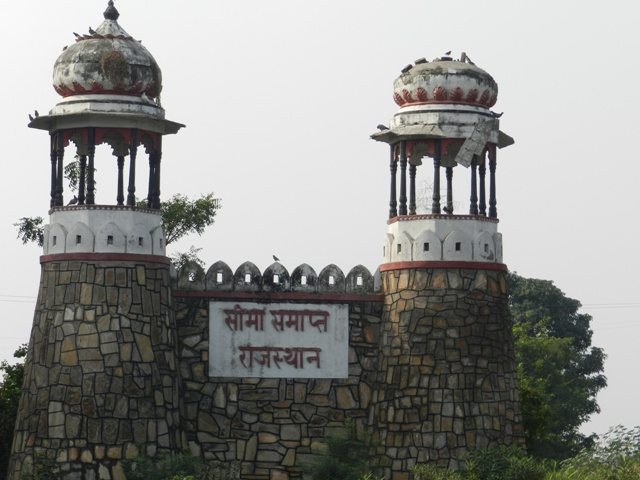 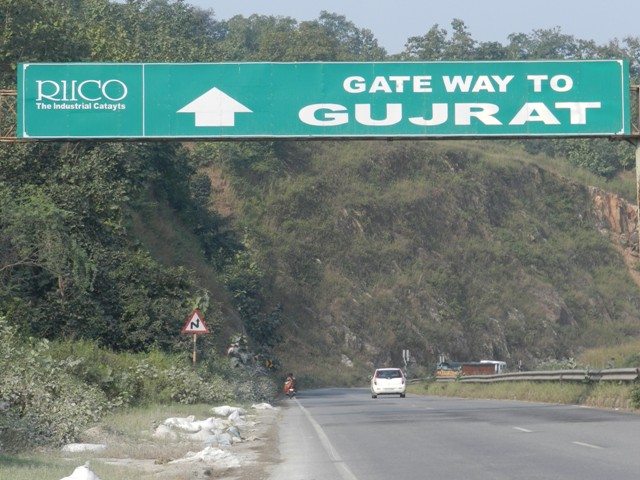 In less than 4 hours, covering more than 250 km we reached the outskirts of Ahmedabad by around 11 am. The weather was still cool and the best part was enough sign boards showing directions to all important cities all the way reduced the unnecessary slowing down on enquiries. A slight left turn towards the Vadodara expressway reminded me of the Yamuna Expressway. A Rs. 85/- toll for a 100 km drive was one of the fastest and safest drives with ease. In less than one hour we were near the exit however, we descended on the service lane leading to the only food joint alongwith a Reliance service station for a brunch. A Masala Dosa and Sand Witches were promptly served which we relished in no time and after filling the tank at Reliance pump headed further towards Daman.

The road was evenly nice even beyond the expressway, plying on NH-8 traversing the mighty Narmada and passing by the famous cities of Bharuch, Surat, Valsad we reached Vapi in another 5 hours covering 360 km. Turning, right underway the Vapi flyover towards the town leads to the UT Daman. Vapi in first instance looks like very old establishment and crowded through narrow bumpy road. However, soon an old flyover slightly right drops you to the entry gate of the UT with a check point on its right for taxi plates. Rows of liquor shops and bars with large hoardings catches an instant notice just entering the UT. Through the smooth roads, five kilometers straight upto the bus stand is the very bustling, maddening, crowded town of Nani Daman where we landed in one of the many hotels in the area near Nani Daman Jetty. 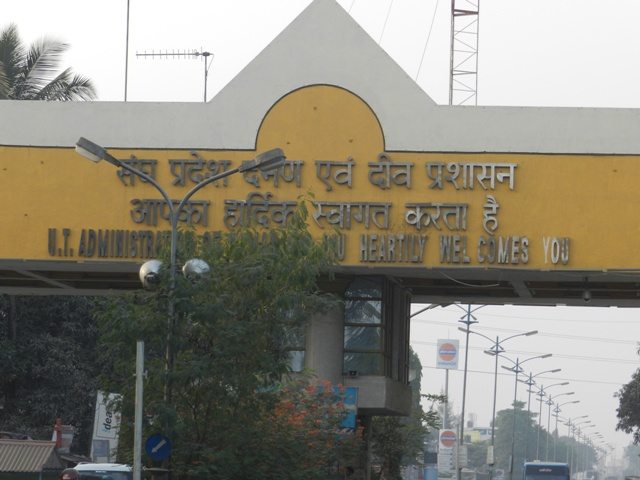 Daman & Diu as all know is an UT comprised of two districts almost 700 km apart of each other. Formerly a Portuguese territory was annexed in India on 19th December 1961 through military coup and administered by an Administrator appointed by the President of India. Talking of Daman, located at the shores of Arabian Sea the Nani & Moti in Gujrati which means Small and Big are the two parts of Daman connected by a concrete bridge over River Daman is prominently a week-end destination for Mumbaikars and also many adjoining residents to beat the hassles of the cosmopolitan life. Besides a constant inflow of Gujratis, the reason best understood is availability of abundant liquor shops, which is a ban in Gujrat, outnumbers all other visitors.

Frankly, the much awaited destination didn’t impress me much however, a better & closer stopover option to reach Mumbai early next day was a relief. Places worth visiting here are all located in Moti Daman viz. the Fort, the 1603 AD Bom Jesus Church and Jampore Beach. The sites at Nani Daman viz. Devka Beach and Nani Daman Jetty are least impressive and not worth mentioning. 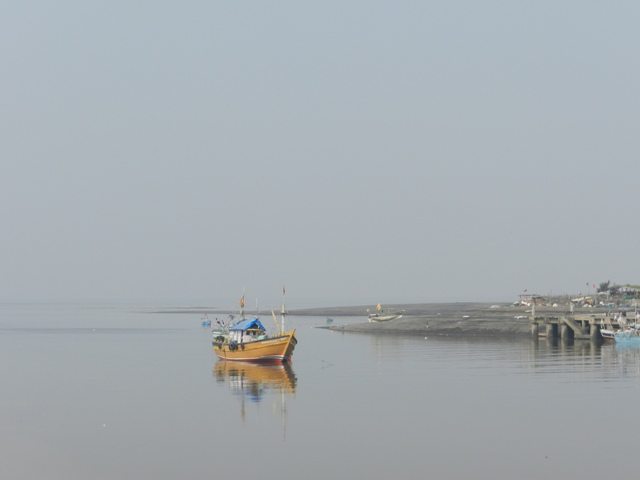 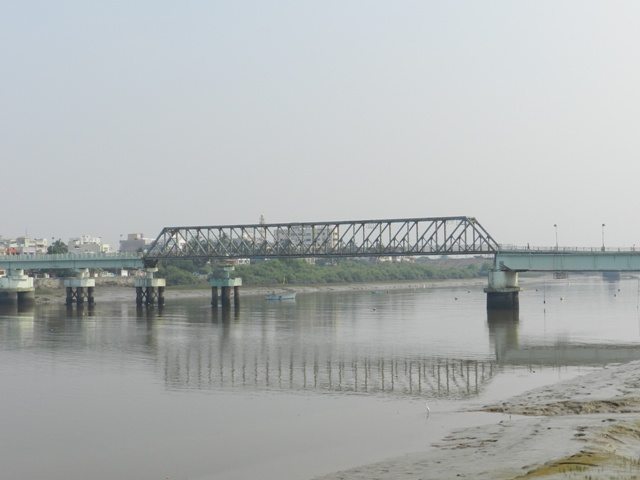 In the evening we planned to visit Jampore Beach. After a short nap, we were on the bridge connecting two parts to Moti Daman. The fort appeared on the way to Jampore, an entry through the fort pillars revealed it to be a one sided boundary, the other sides being the ocean was naturally fortified and a safe place to the Portuguese who lived there for more than 450 years. A 1603 AD church was a worth visit situated just at the entry point. Wooden carvings and painted glass works were still live however, the 410 years old building looked aged. A small park in its front was adding a little charm to it and good for me providing space for framing a good pose in entirety. The road further leads towards a small park and a light house on its left. A church peeping out of the concrete jungle across River Daman also caught my attention and I never miss to frame anything like this even without knowing it.

A Church in Daman 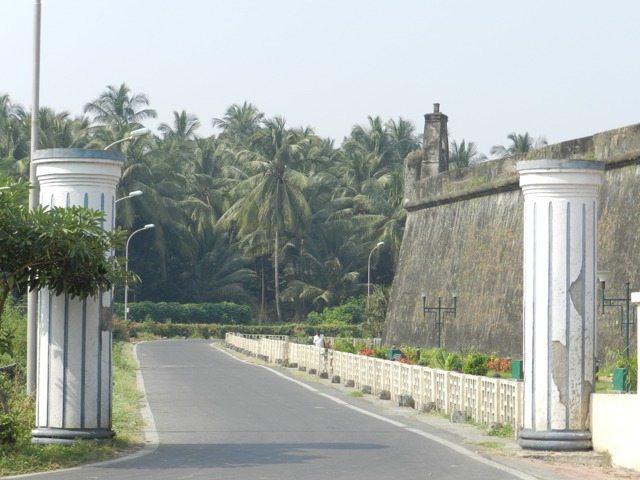 A road along Daman Fort 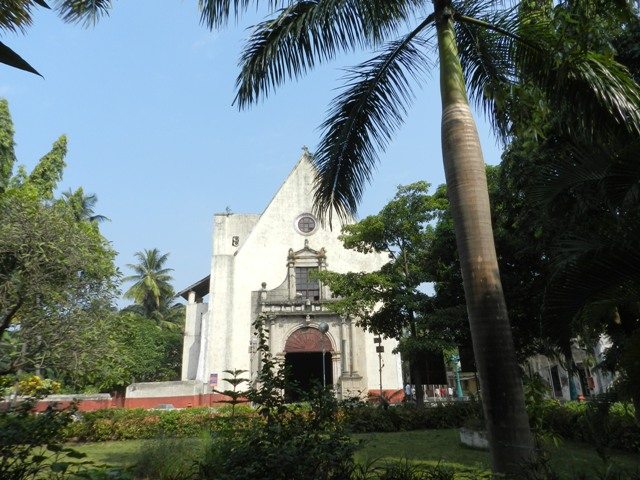 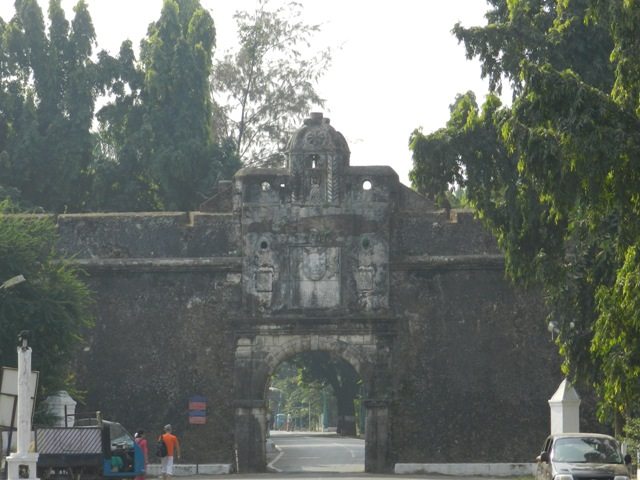 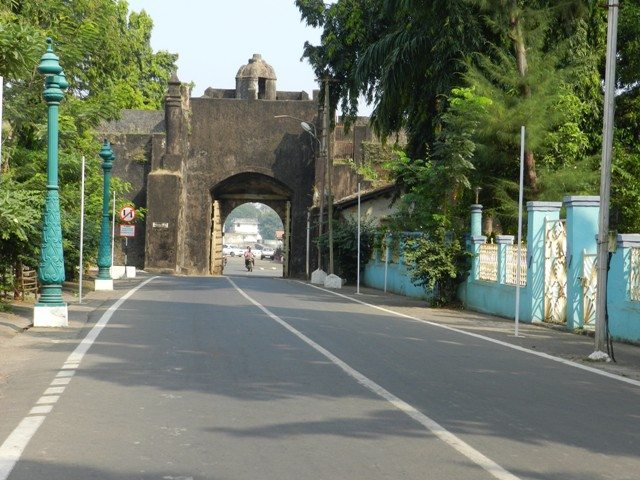 Inside the Daman Fort 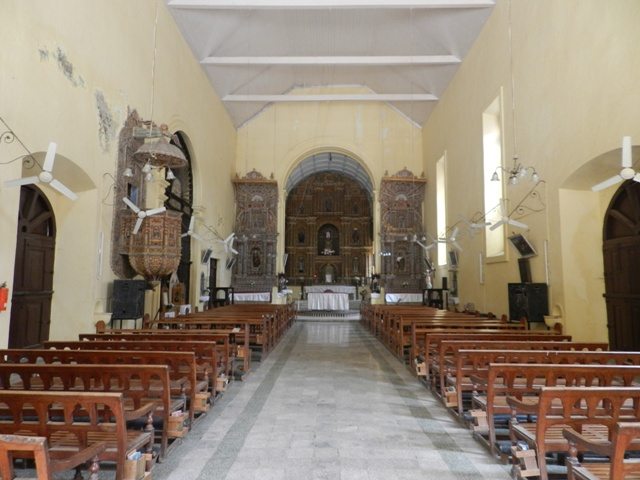 Locals suggested visiting the Jampore Beach in the morning for the oblivious tangible apprehensions of countering unreasonable clashes with drunken-brawls. Being sensible, when with your family is I feel is an intelligent act though, the macho mind always resists fearing such instances. I suppressed my macho-ness and preferred to visit the beaches next morning and utilized the evening in walking along the bustling market place counting the wine shops which were more than 39 within 2 km, later stopped doing it and entered into one of the eateries. Every small or big food joint is equipped with a bar too besides those shops I referred. A bottle of KF strong costs Rs. 60/- in shops and Rs. 100/- to 140/- in bars depending upon the size and shape of the furnishings inside. We were in one of the best hence had to pay the maximum. Every table had a countable number of bottles in different colors and shapes with families enjoying wining with dining in loud atmosphere. The liberal city has no age bar supposedly for serving alcohol because a group of very young stags sitting beside our table were so intoxicated that two of them fell down a couple of times while making way to the loo.

Hurriedly I finished sipping the chilled KF after which relished the tasteless Biryani and shifted to our hotel which was nearby. Next morning we planned to visit the Jampore Beach and make way to Mumbai for my meeting which was fixed for 4 PM at WTC, Colaba.

Jampore beach is a nice and cool place and worth visiting. A row of hutments on the shore blocking the sight of sea serves liquors, sizzlers and sea food mostly comprised of small sized prawns and pomfrets. You need to make way to the beach only through those shops which have small openings on their back, fronts are sea facing. Plastic chairs specially designed for a leisure seating, half immersed in the sand are arranged in sequence in front of the shops. Early morning, we found a number of tourists mostly with families enjoying their drinks leisurely on the beach side budget-resorts. Fresh catch of prawns lured us to give a try and we ordered a plate containing 8 pieces at Rs. 150/-. The prawns were definitely fresh but cooking in too much of spices spoiled its natural flavour. We therefore, again ordered a plate without spices and the later was better. The sea was calm with a far stretched beach along the timid water which was creeping gradually closer in natural course. On the way back we were amused to see a decorative piece in one the government office premise and couldn’t resist from putting the image here. 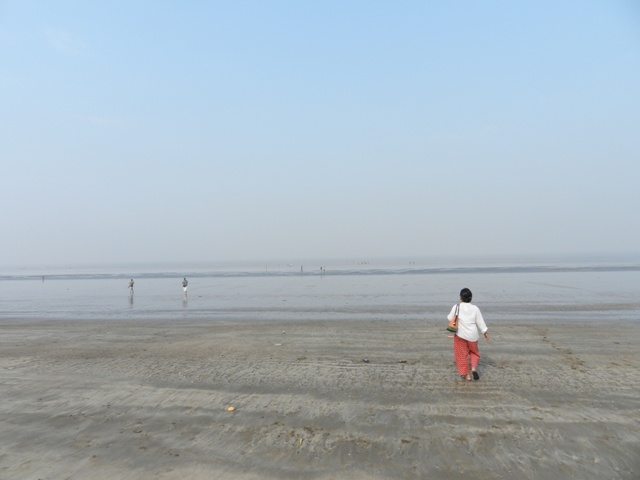 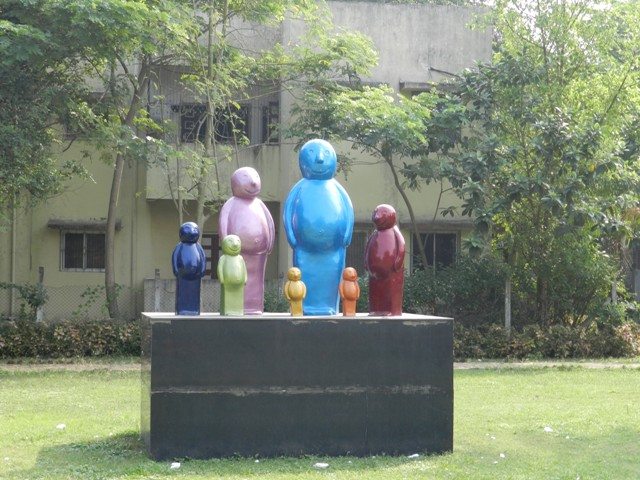 Decorative on way to Jampore Beach

I was a bit scared. It took me days to settle in the city life of England. A trip all alone to the countryside…