We ran into a smallish whirlpool. Small, but according to Mathias, dangerous if we got right into it. But we didnt. The captain and crew were smart, seasoned guys who knew their whirlpool from a monstrous ripple. We skirted around the danger zone and sped away towards Komodo Island, to keep our appointment with the lizards. The life jackets did not come of any use! Alas!

The camera batteries were running dangerously too too! 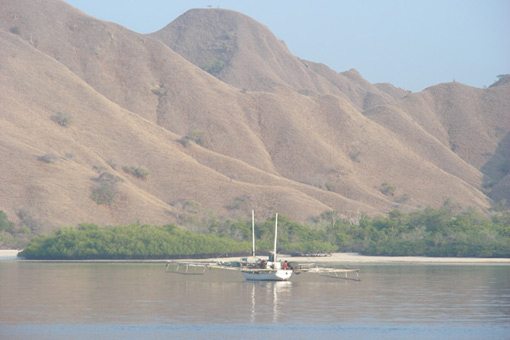 I dont suppose anyone on board was anxious to see any more dragons, but the Komodo Island tour was very much a part of the itenary. I remembered just in time what the Slovak and Tomas had said about not wanting to visit Komodo Island. “You have seen one, you have seen them all,” or something like that. Anyway, they had abandoned their dragon tour for a dive elsewhere. 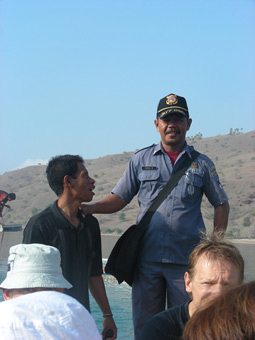 The Coast Guard at Komodo Island.

From Rinca Island to Komodo Island is quite a journey, more so if you have whirlpools thrown in. It wasn’t whta you could call a ‘rummy’ morning, but I did learn to identify a whirlpool. If you kept a close watch over the surface, you will suddenly find a huge circle in the water that has turned darker, followed by sudden, violent ripples. You know you are heading for trouble if you didnt steer clear. Some were not big enough to suck you down, but they could cause some damage, and you could get thrown overboard with all the turbulence. A man doesnt stand a chance against the smallest pool as does a 30-ft boat.

We reached Komodo Island hours later when the sun had turned hot. Komodo Island was bigger than Rinca Island and that made it difficult to sight dragons, or so we were told. Komodo Island however is more tourist friendly, meaning, there is a decent enough cafe, toilets and a row of shops, all manned by the locals, selling wooden dragons for exorbitant rates. You could pay in Euro or Dollars, in fact the locals welcomed these currencies, as against their Rupiahs.

Returning after a successful dragon-viwing trip across the island. The sea in the distance is our destination. Our boat is anchored there!

After pausing for a night in Mysore, we headed towards Nagarhole; one of the biggest national parks in South India. The drive was scenic with the roads covered with abundance of verdure.