We decided on a single-day trip around the Delhi circle. Amby suggested for a jungle safari. So, we started planning for Ranthambore and booked the tickets from Delhi to Sawai Madhopur. On April 24th 2014, we boarded the train from Nizamuddin station. Around 3:40 am, train was at Sawai Madhopur station. We got refreshed at station and had tea with some snacks.

The time for the safari office to open is 5 am and the office is in 1-2 km range from the station. So, we walked towards the safari office on a deserted road. We were seven boys, so we booked one gypsy and got ready for the  jungle safari. There are some small shops around the booking office where we had Maggi, chips and tea, since there was no other option. We got the ticket for route-10 and our guide’s name was Sher Singh. Hiring a guide was compulsory with each vehicle. Ranthambore jungle was dry and dense in this season. We started the safari at 6:30 am and finished at 9:30 am. Jungle is surrounded by hills which increase the beauty of jungle. There is also a river that passes through jungle, but was dry. There were some different kinds of flowers tree and almost acacia tree. 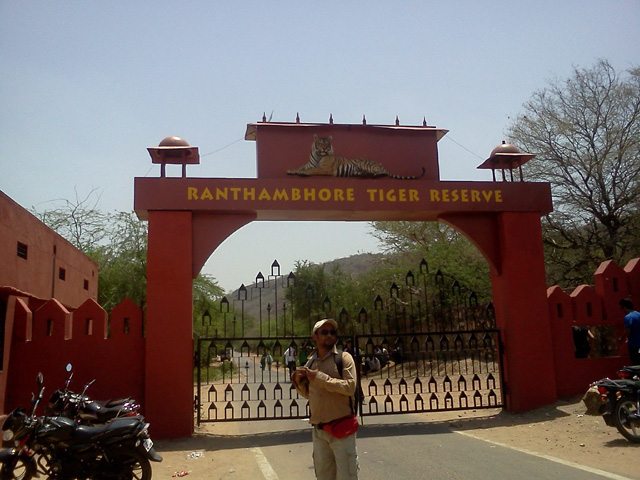 We had entered the jungle and were quiet and attentive, but we got all excited when we saw any animal. The animals tend to run away after hearing sounds of vehicle of people talking. So the guide requested us to be quiet and enjoy the safari. Going in open gypsy was exciting and scary too if you know that there are 60 tigers and some bear too. Sher Singh was describing about the name of each animal and their behaviour which we saw in the jungle. We saw a spotted dear, Nilgai, Sambar, Chital, Chinkara, different kinds of birds and cute gray coloured rabbits. I didn’t remember the name of the birds, but some of them were very beautiful. Sher Singh said that this route had around seven tigers in the area, but we were not lucky. The overall experience of jungle safari was awesome but we could only one because of the heat. 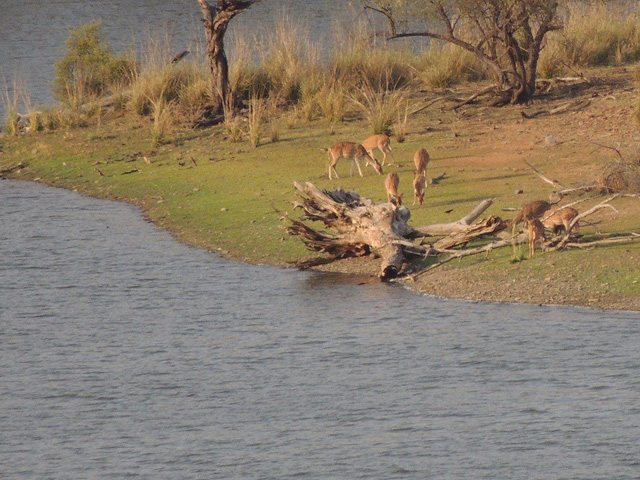 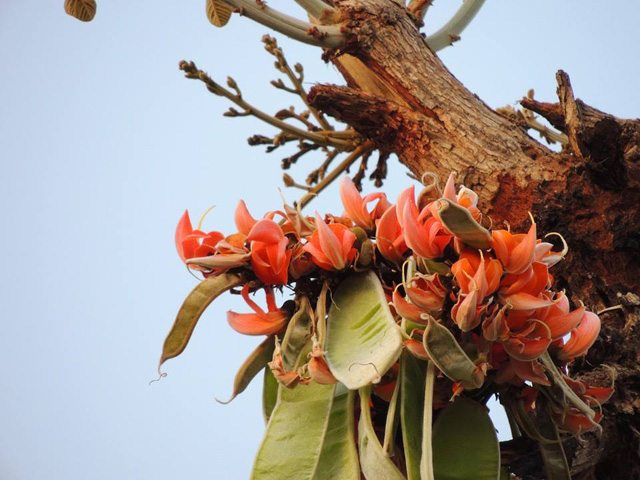 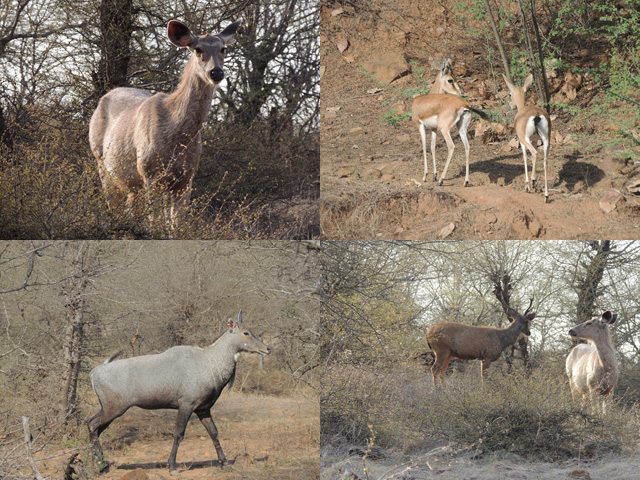 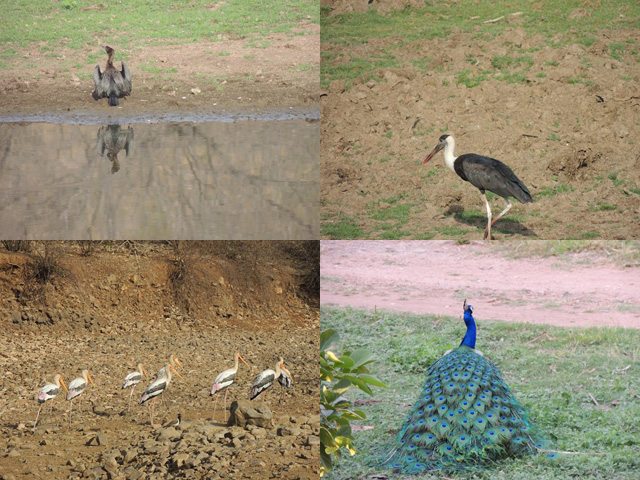 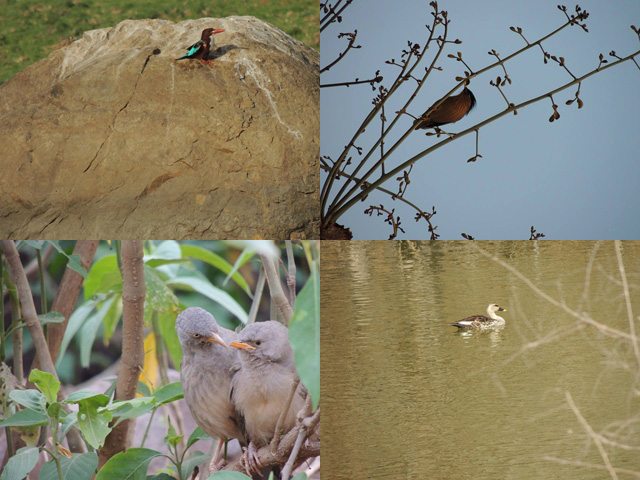 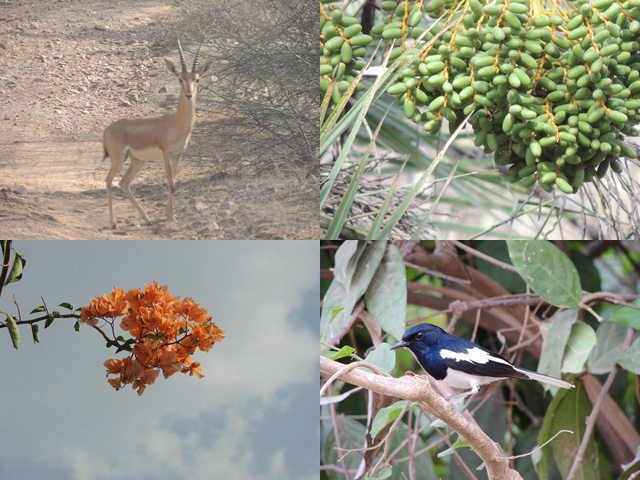 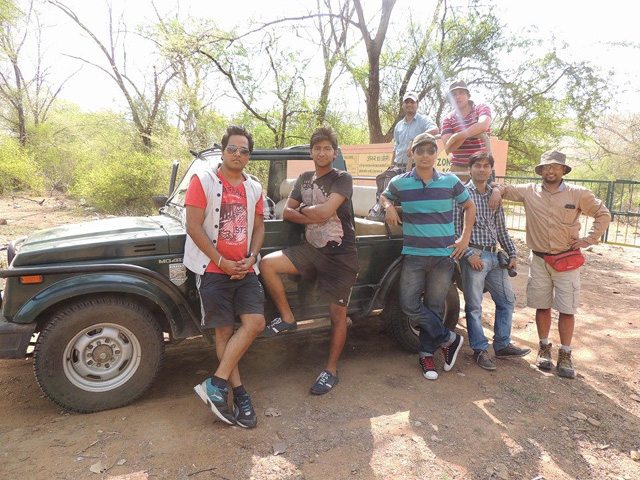 All of us after the safari

After the safari, we had lunch along with a tall glass of Lassi (लस्सी) and moved to see the fort which is around is around 8-10 km away from route-10, so we hired a cab. But there was some road work in progress. So, we had to hike the last 2-3 km to reach the fort. On the way we saw a lot of mango trees and we enjoyed the green and sour mangoes. We also saw a biggest Banyan tree. Afte I searched on Google on coming back, I realised that Ranthambore is also the site for the second largest Banyan tree in the world. 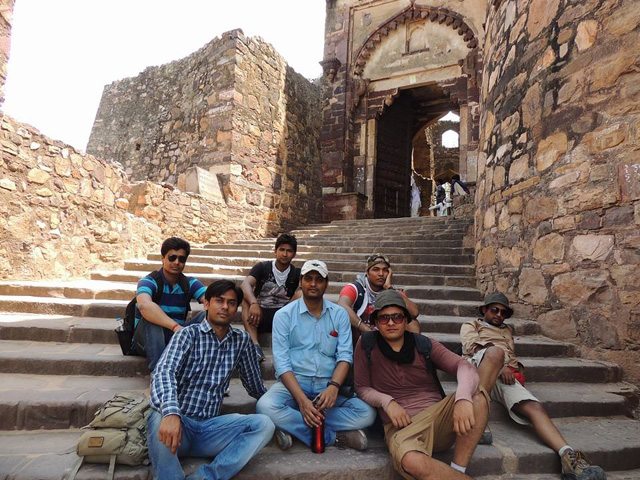 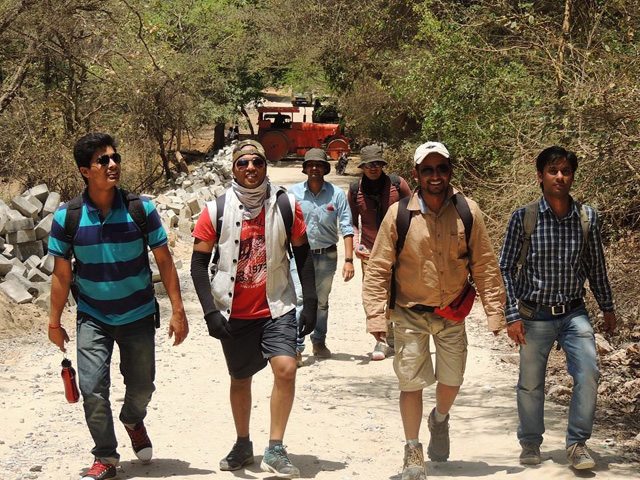 On the way to the Fort

Ranthambore’s fort is famous of their great history and Ganesh Temple. We hired a guide who took us to the Hindu temple, Jain Temple, Darga and Mosque. Fort’s entire gate is still good, but most part of the fort has converted into ruins. We need to climb 300 stairs to reach at the top of fort. One of the biggest lake is adjacent to fort which enhances the beauties of that place. There was a lot of Gibbons (लंगूर) and Peacocks. We also saw a dancing peacock. The guide continued to recite the history of fort and also told some interesting stories. The fort’s wall had a different type of circular symbol, which the Guide shared was the symbol of Chauhan (चौहान) kingdom.

There was an awesome view of lake and jungle from the fort. After visiting some important place in fort, we finally went to “32 Pillar Chhatri”. This Chhatri was built by King Hammir Dev in his father’s memory. He was also building another Chhatri in his mother’s memory that did not get completed due to his death. It was 2 pm and sun was in full shine. But it was windy at the top of Chhatri and more than 50 moneys were there. One Shiva temple is inside the Chhatri building, so we went down stairs and prayed. All of uswere tired and decided to rest. So, we spread the bed sheet and slept on the floor of Chhatri. We all got good sleep for two hours. 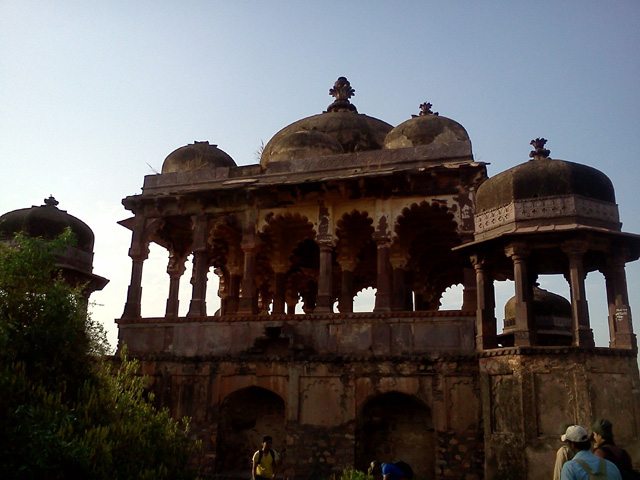 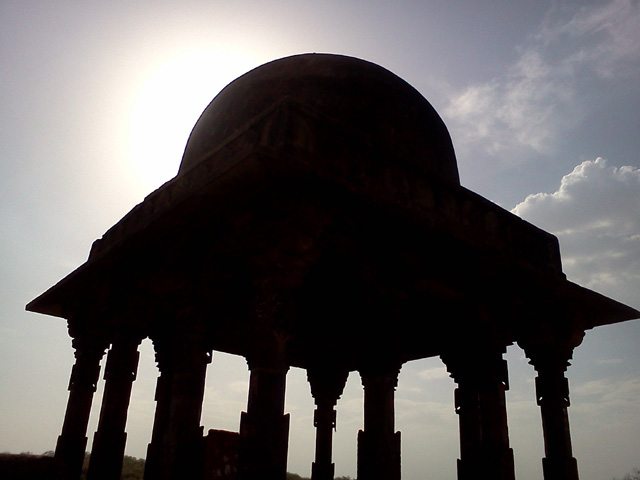 After waking up around 4 pm, we moved towards the Ganesh Temple whcih is famous for that if someone makes a small dummy house here with stones, then his wish to make a real house gets fulfilled. So, we all created a small house with help of stones and prayed for our own home. On the way to temple, one can see a lot of stone houses. The palace inside the fort, was closed due to damaged condition. There is also a small pound near Ganesh temple. After visiting Ganesh temple, we visited Jain Temple. Since we all were hungry, we had “कचौड़ी with कढ़ी” from a street shop.

We returned to the station around 8 pm and had dinner after the Gol-Gappas from street. Although our initial plan was for two days trip with the train reservation for April 27th, but realised that one day was enough for this hot season. So, we took the normal train ticket. Sawai Madhopur to Delhi is around four hour journey. We started playing card games in the train to pass time. Early morning of April 27th 2014, we were in Delhi. Our decision was good because we had the rest on Sunday. This trip was great and we enjoyed a lot in one day. I think we should plan this type of trip in each month.

A day in Ranthambore was last modified: October 28th, 2021 by Vivek Kumar Srivastava

The trek starts from Wan. Wan—10kms—Bedni Bugyal—10—-Baguabasa—-7—Roopkund. The motor route follows the Rishikesh Badrinath highway NH58 till Karanprayag, after which you take the road for Gwaldom. From Tharali, the road to be taken is towards Debal- Lohajung. From Debal, ditch your vehicle and take a local cab, since the road requires a vehicle with good clearance from ground. If you are insane like us and did manage to drive till Lohajung with a lot of pre-inspection of the road and post inspection of your vehicle after crossing the muddy truck track hurdles, do drop it now and take a cab for 500 rupees for 12 kms to Wan where clearance only matters if skills are to match. At one point during the last stretch, the cab really got stuck in mud at a turn which had a steep fall on the driver’s side, tyres deep in 2 feet high slush and the Jeep was swerving unpredictably for us, thankfully the driver knew how much mud wrestling was good for his jeep. To add spice to the events there was a herd of wild boars crossing the road 10 yards in front of us. At Wan we met this interesting guy called Herasingh Bugyali , who introduced himself as an all-rounder. His all rounder definition comprised of being a shop-owner but also being able to lift heavy backpacks and doing roopkund and back in a day. That’s pretty much true about everybody there. So we got two such all rounders or porters and started the trek the next morning at 9, one hour behind fellow Noida trekkers from an IC chip design company. We caught them resting and sharing a cigarette within half a km of the trek. They reached Bedni Bugyal at 10 pm that day, while we had caught lunch at Bedni at 2 pm (such benchmarking always impresses me). If you are carrying your own backpacks don’t imagine to do this one in 5 hours as the climb is attrocious-level-7. Attrocious-level-9 is the final Baguabasa to Roopkund stretch. You might think is this a travelogue or what, a deter-ogue, but trekking here is not easy. Oh and I haven’t told you why not to go to Roopkund between June to September( inclusive). Coz it rains and there’s nothing to see except fog and clouds and all that Trishul jazz, thoughts of views of Nandaghunti and Trishul will tease you. See what I mean.