I hope you have enjoyed reading the first part. Here comes the next..

The late night celebration lasted till 1 am. Next day, I got up around 6 am. The morning was very pleasant with light & scattered clouds around us. Resort people were already busy in preparation of bed tea followed with breakfast. I went up towards the road and checked my Car. It was parked safe & secure. Last night’s heavy rains had given it a new shine. Rains of Delhi just leave the vehicles with dust spots, but now it was totally different.

I walked on the road for approx 45 minutes and came back to resort. Morning tea was ready. In extreme heat of Delhi, even morning tea never attracts me. But that day, I enjoyed the cupful.

Soon, Prashant also got up and again we went up towards the road for another walk. By the time, we were back, it was 8 am.

We took our bath (of course in stream only) and got ready for river rafting.

The breakfast was served by 9am. Hot tawa paranthas (tandoor was not working due to heavy rains at night), Aloo subji, butter and curd were delicious.

The resort caretaker asked to reach till Hotel hilltop by our car and then reach near Lakshman ji ki murti. Their people were going to pick us from there to take us to shivpuri for rafting. He also told that there is going to be a Dry box on the boat so we can carry our Camera on it.  He also gave us a paper with phone numbers of their people on it.

We travelled up to hotel hilltop and parked our car there. But, we made a mistake here. We kept every thing, we have in our pockets, in the car, except our CAM and some money & the paper from resort caretaker (fortunately). But we also kept our cell phones. We came down up to Lakshman Jhoola and clicked some pics here. The atmosphere of Holy city was really divine. 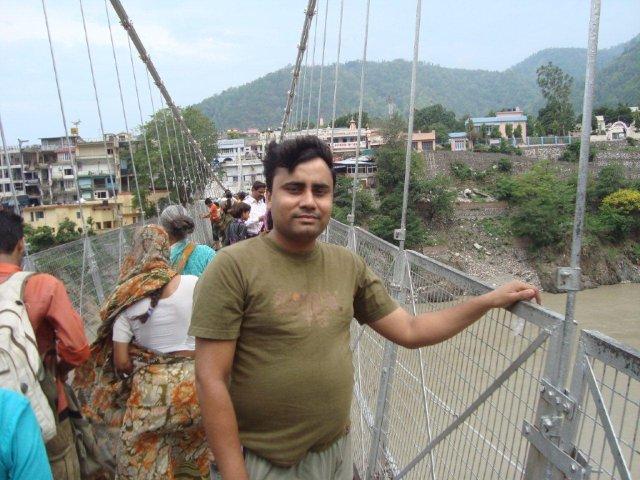 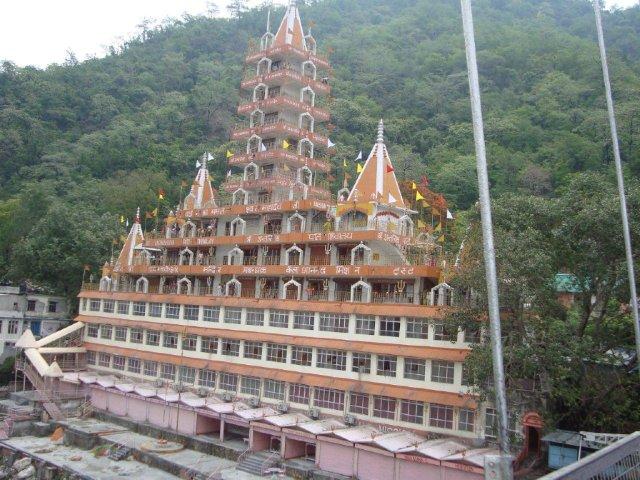 We crossed the Jhoola and came up to Lakhman ji ki moorti on next side. Since, our mobiles were left there, we started searching for a Phone booth. But due to TELECOM KRANTI in the country, all our efforts were waste and we ended up in trouble due to not getting even 1 phone booth. Then we requested 1 shopkeeper to allow us making a phone call from his cell phone and charge the money. He handed over the Phone to us and we called the rafting people, who told us the regn. number of their vehicle  and also told that vehicle will reach there in next 20 minutes with a boat on it.

We thanked the shopkeeper for call and offered him money as charge but he refused to accept. We came back to moorti and waited for some time. Soon, the vehicle appeared with a large red coloured boat on it. We boarded the vehicle but driver told us that another group of 5 people is also going to join us. Soon these people also joined and we started for Shivpuri.

In next 20 minutes, we reached shivpuri. The boat was put down by driver and two more people, who turned up as our guides in rafting. They gave us the life jacket and helmet. We got ready with these lifesaving tools. 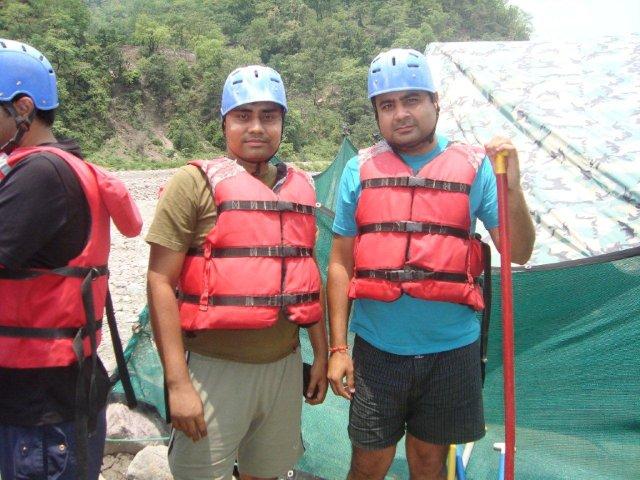 The guides named Hari and Ajay took the boat to water of Ganga. This water was much colder that of stream flowing behind our resort. The boat was made wet with water. The pressure in the boat was maintained.

After this, our guides told us the basic tips and guidelines of rafting. He took approx 15 minutes in telling us all this. After this, sitting sequence was decided. With a JAIKARA of GANGA MAIYA, we boarded the boat. For next 10 minutes, he did a rehearsal with us about his commands, in calm water.

Then, we started the adventure. 1st rapid was very close to the starting point. It pulled us towards the high rock but the water pressured guided us towards flow of river. Crossing 1st rapid gave us lot of confidence, but this was just start. Much more was about to come.

When we saw towards peak of the hills, we found the trees and rocks moving. This was because we were looking towards the flowing water for a long time.

Then came the second & third rapids. These were much bigger and much violent then the first one.  But our guides gave us a lot of confidence and kept our moral high. We crossed both of them, fully drenched in water.

Similarly we crossed up to 7th rapid. Some of them were just OK but one was very very adventurous. Our boat was shaking like any thing. Every second, I thought that boat is going to throw out of it. but with Jaikara of Ganga Maiya, we crossed it also. But, no shame is accepting, I was really scared at this rapid. 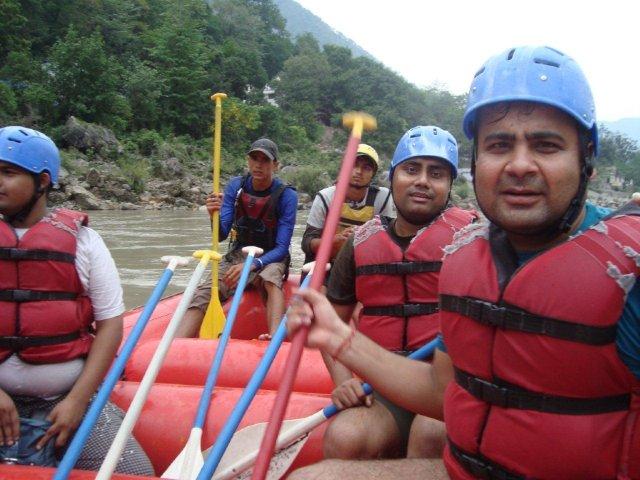 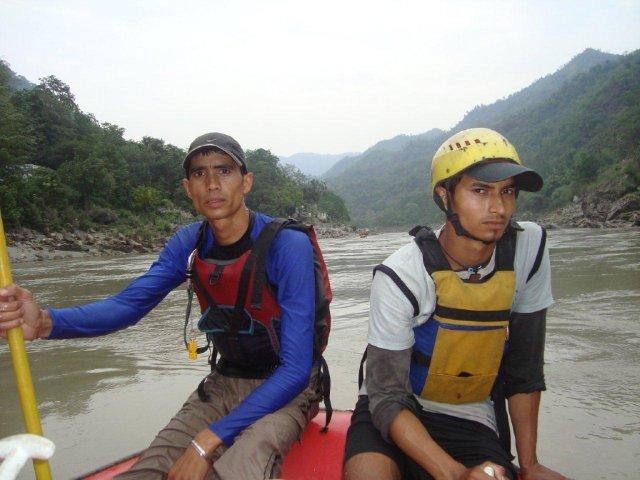 After it, a flow of calm water was there for some 15 minutes and we kept on flowing. Some of the group, including Hari, took a dive in river and stayed there for some time. Then, we took a halt on the shore and had some Hot Maggi. 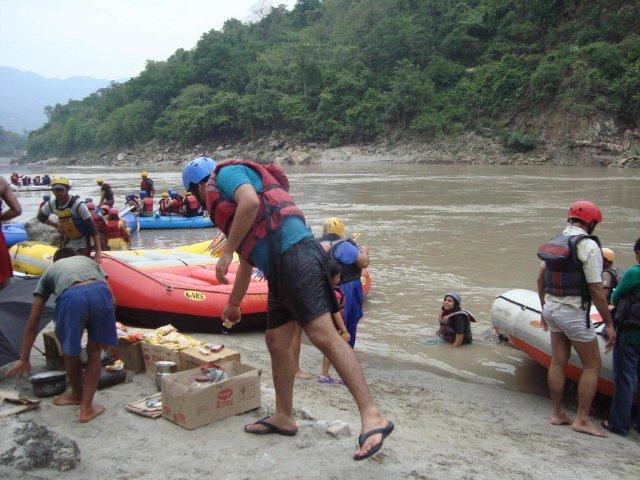 With a rest of some 20 – 30 minutes, we started back and crossed the 8th and last rapid. We were exhausted but excited, drenched but high in spirit. Since, rains had started in hills, flow of water was sandy, fast and cold. 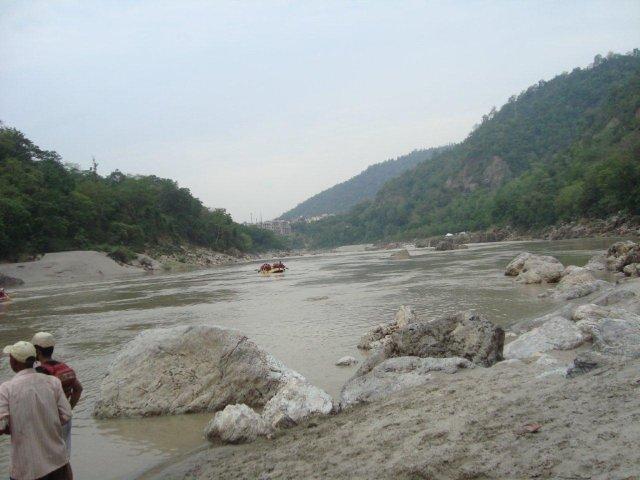 We were lucky because they told us that rafting was going to be closed by another one week due to high-tide water in rains.

With a determination to come back again, we landed on the bank near Lakshman Jhoola.

Friends, this was 1 of the best experiences, i ever had in my life. I strongly recommend that each one of we Ghumakkars should have it.

With a promise to all of you & myself, that I will again go for rafting, i sign of  from here.

But, pls wait for my next post in the series as we spent some more good time in this trip.

I have always wanted to drive long distances rather than be driven, flown or put on a train. On the two occasions that I visited the  USA…