With a multitude of relatives in Bangalore, I have been there many times over the years, but with so many families to visit, I had never really taken in the sights so to speak. In the past couple of years, business trips to Bangalore were always combined with short holidays in Mysore and Coorg. 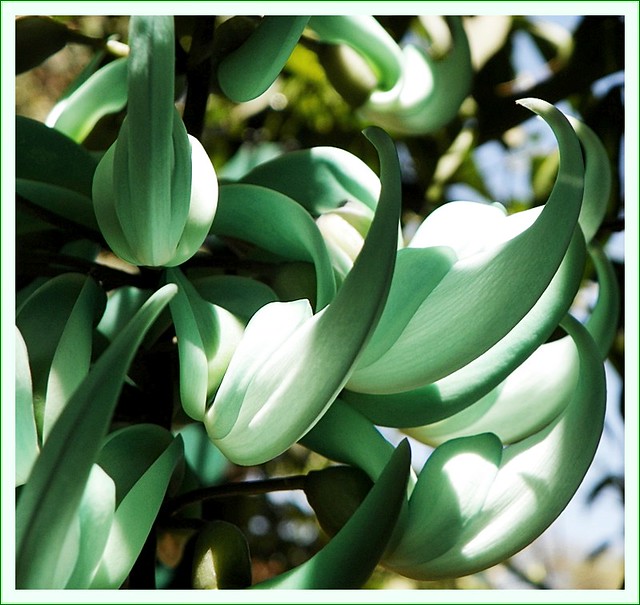 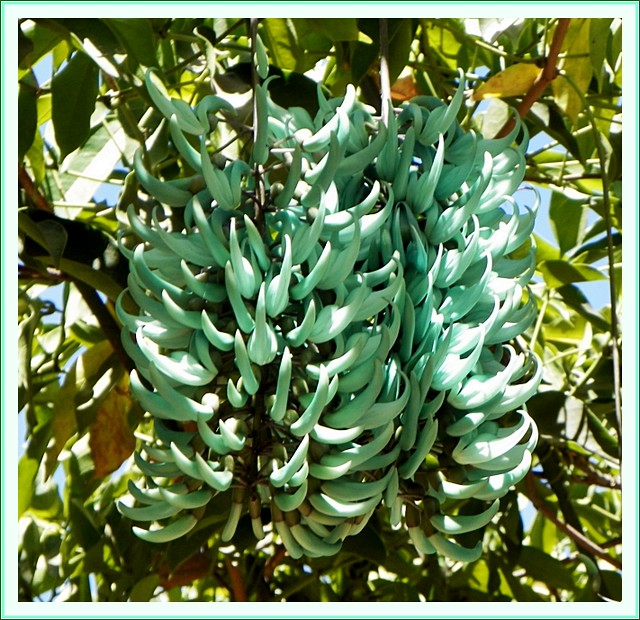 I asked at their nursery if I could buy a plant and was horrified to learn that it would cost at least Rs 900 and that too just for a cutting with no guarantee that it would take! Thanks but no thanks.

Bangaloreans are really lucky to have such a beautiful park right in the heart of the city. And this is just one of so many gardens and parks, no wonder Bangalore is called the Garden City.

Colourful shrubs at entrance to Lalbagh. One of Bangalore’s four Kempegowda Towers can be seen on the Gneiss Rock in the background: 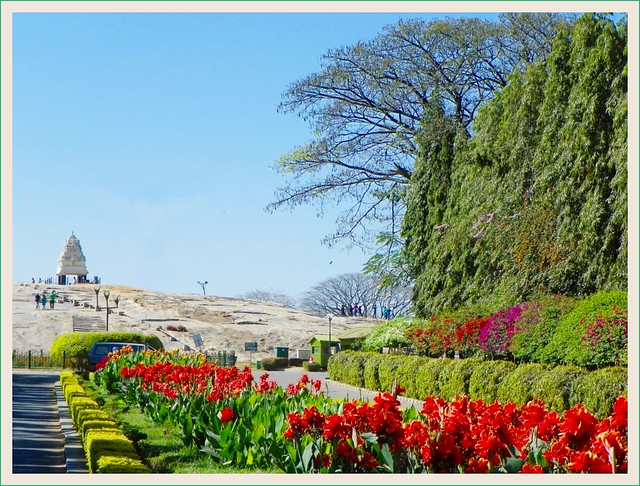 Kigelia pinnata – African sausage tree – so called because of its sausage shaped fruits. 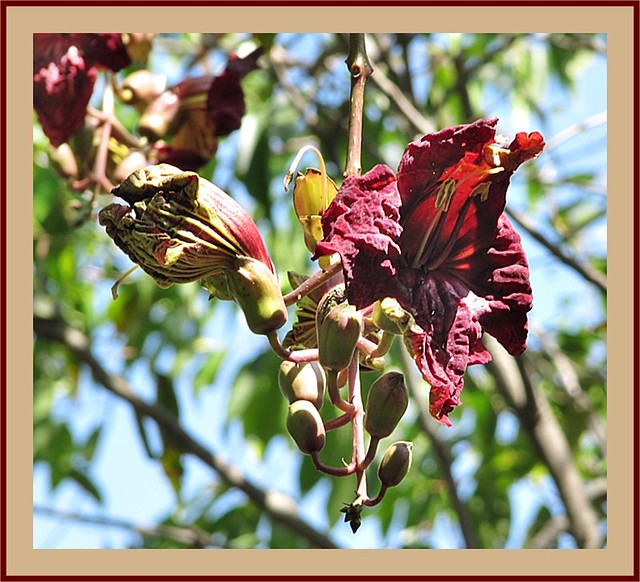 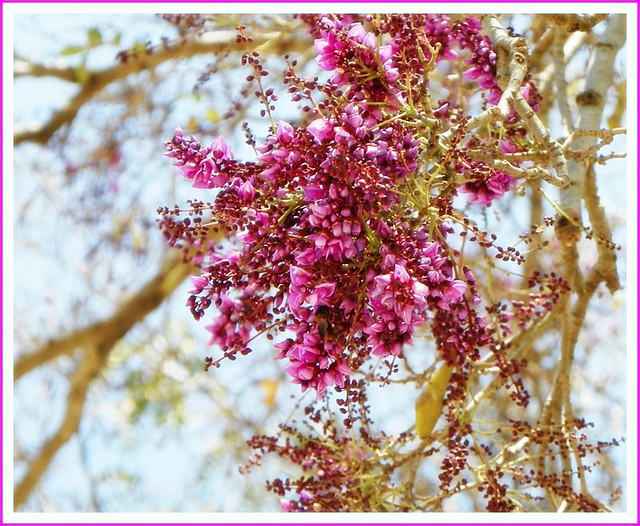 Flame Of The Forest – Butea monosperma 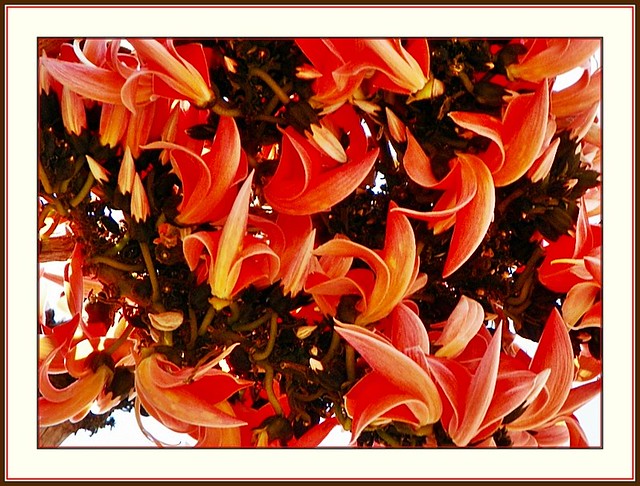 Another enjoyable half day was spent at the Chickpet markets, a shopaholics delight. Chickpet around the Avenue Street is one of Bangalores oldest shopping areas, well known for its reasonably priced sarees, jewellery stores, traditional wares, lamps, books, textiles, bric a brac and just about anything. I remembered it from many years ago but was warned that it would be terribly crowded. Even the auto rickshaw dropped me off in a narrow lane a good 2km away, refusing to enter the area.

Though the streets were narrow and congested, it was relatively so clean. Compared to Bombay at any rate! No spittle on the road, no leaking sewage pipes, not much rubbish, I could not believe it. Even nicer was that the locals are so well behaved. No one pushed or nudged or did anything worse. Such a refreshing change to be able to walk in a crowded market street without having to be on guard all the time. Whoever I asked for directions or assistance was polite and helpful. No one tried to rip me off. The weather too, was lovely. Unfortunately I did not take my camera along so there are no accompanying photos. I would highly recommend a visit to Chickpet over a visit to any of Bangalores fancy malls. For those of us, especially ladies, who enjoy old style shopping that is!

I was curious about the new Butterfly Park at Bannerghatta NP. What a disappointment that turned out to be. Getting there took ages in the morning traffic jams on busy Bannerghatta Road. The butterfly enclosure though beautifully landscaped with adequate larval host and food plants, was singularly lacking in butterflies. There were more butterflies outside than within! We did not have time to do the safaris and headed back to the city. Fortunately the traffic had eased by then. 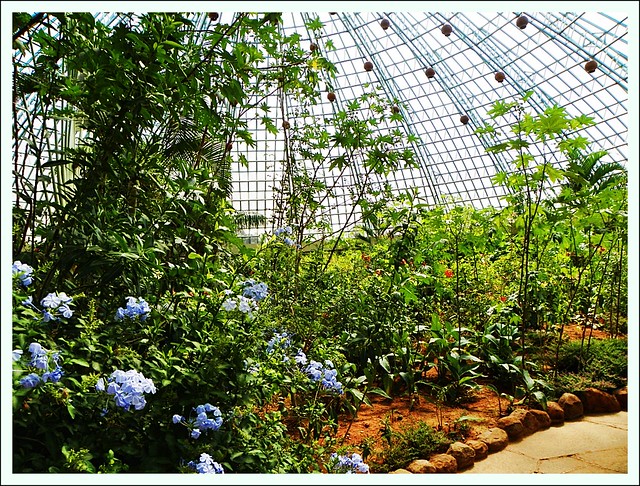 One of very few butterflies in the Bannerghatta Butterfly Park 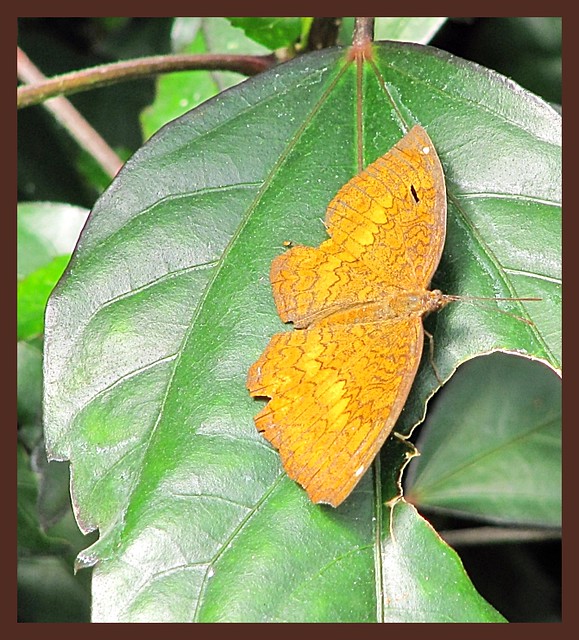 The next day, we went to the Big Bull Temple at Basavangudi. This may be the only place where the Nandi Bull has his very own temple, instead of being out in the open facing Lord Siva. Photography is allowed here and visitors can circumambulate the very cute Nandi Bull. 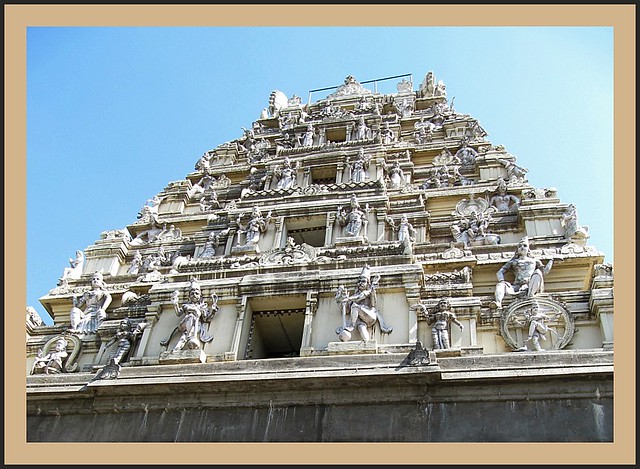 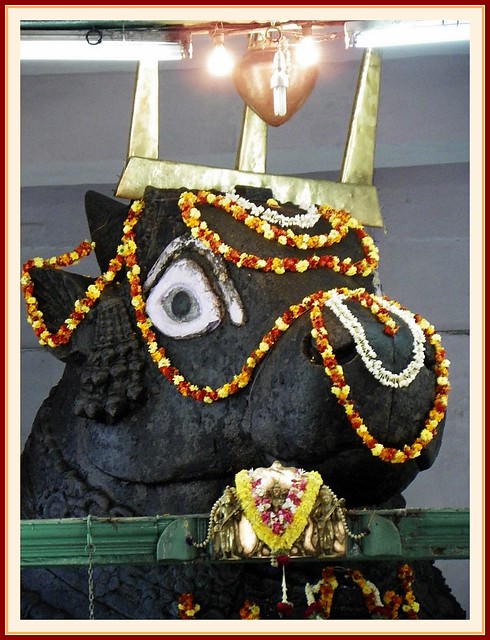 The massive bull is carved out of a single boulder and surrounded by the Bugle Rock Gardens – a forest style park created around several natural boulders. With tall trees, lush undergrowth and small ponds, this little forest is home to pretty birds, bats and monkeys. 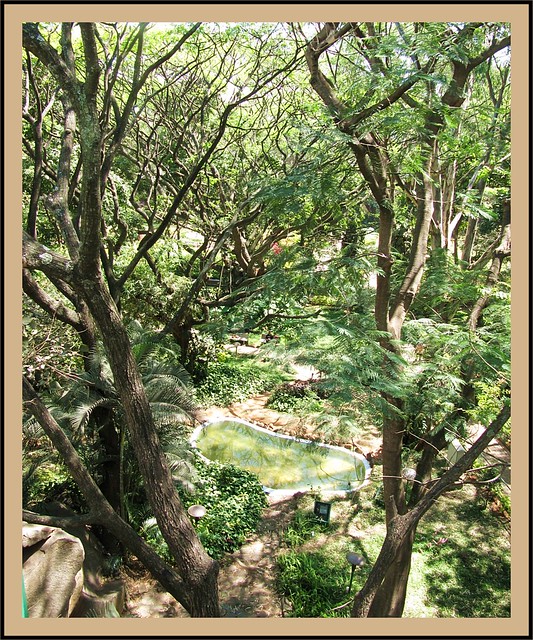 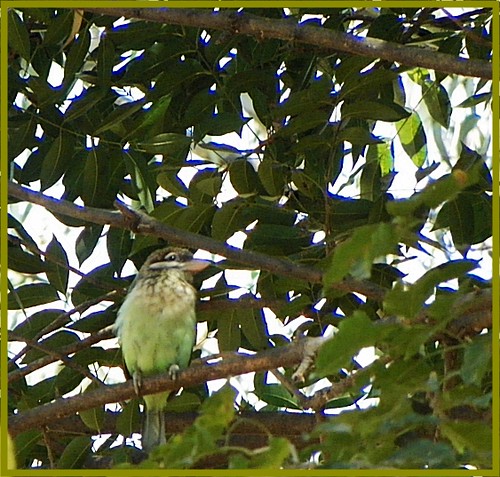 A paved walkway leads to a watch tower. Another leads to a beautiful flower garden at the base. 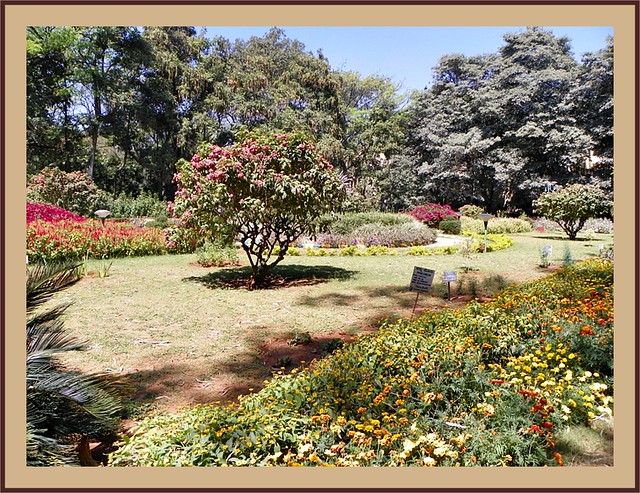 This is a true butterfly garden with hundreds of gorgeous creatures flitting in and out of the many species of flowers. It was such a delightful vista that we spent an hour admiring the many winged beauties. The person in charge of Bannerghatta could learn a lot from this humble little garden. 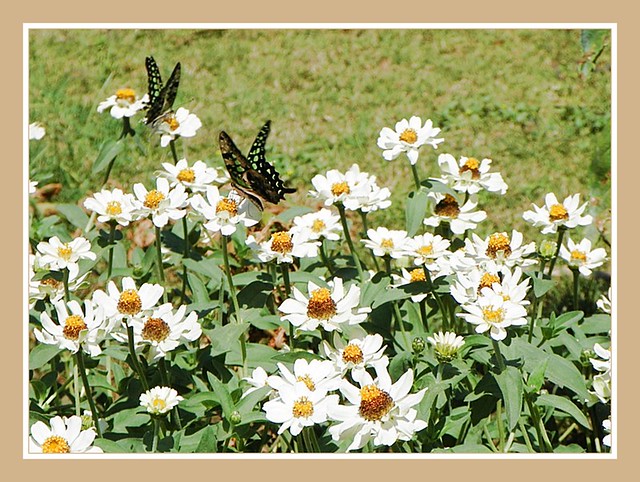 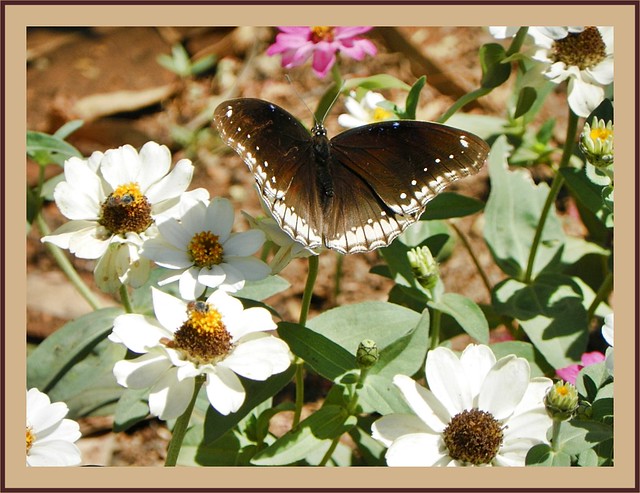 In 2002 we had seen the Belur temple and I was keen to see it again. As we had a day to spare, we set off on a day trip. Even with an early morning start to avoid traffic, it took a good 4 hours to reach Belur. The roads are good but with two lane work in progress in several sections of the highway, it is just not possible to maintain a steady speed. Once the work is complete it should be a smooth ride all the way.

Belur – Velapuri of the Hoysala kingdom is known for its Chennakesava Temple built around 1100 AD.

Fine filigree stone carving and a star plinth are characteristic of Hoysala architecture. Every available surface both within and outside the temple are covered in carvings, friezes and sculptures. The Darpana Sundari – Lady With The Mirror is one of the better known pieces.

Here are some pictures:
Chennakesava temple at Belur 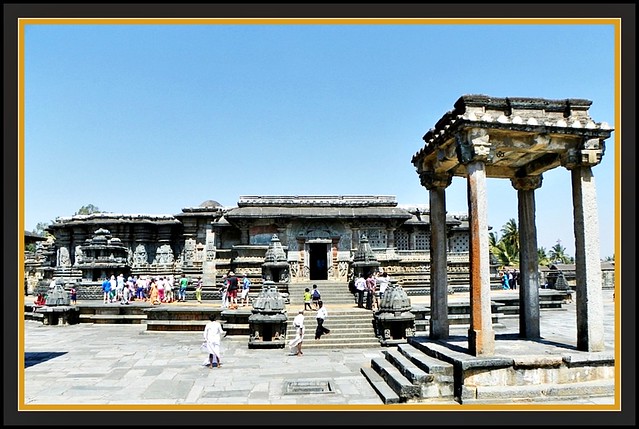 Carved inside roof. I took this quickly while the dark interior was momentarily lit up. Unfortunately no tripod so the picture is not sharp. 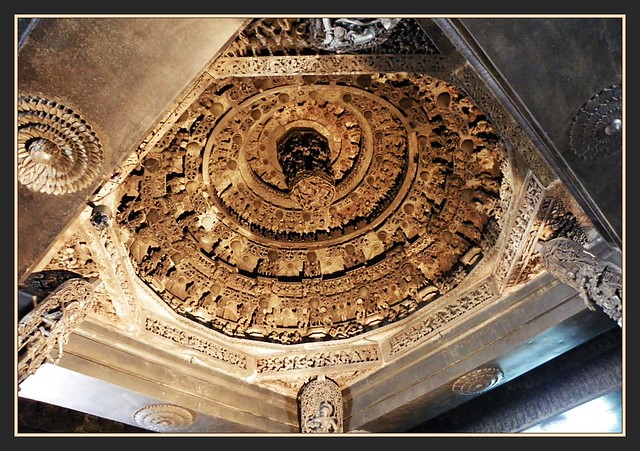 Some of many carved pillars inside the temple 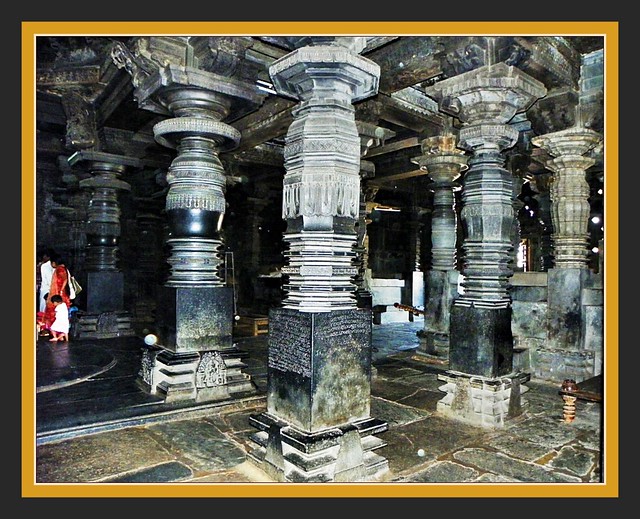 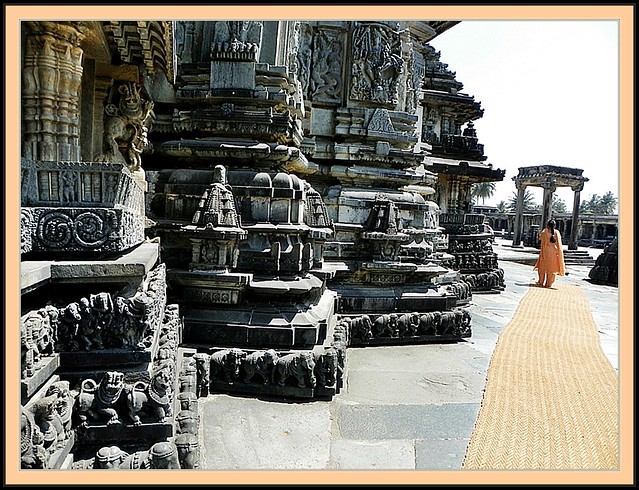 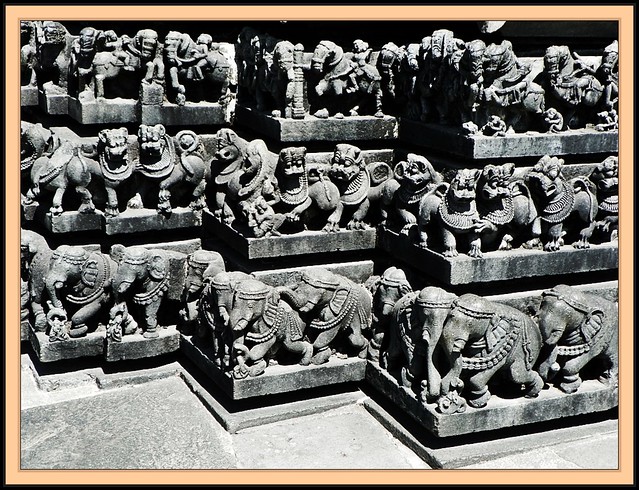 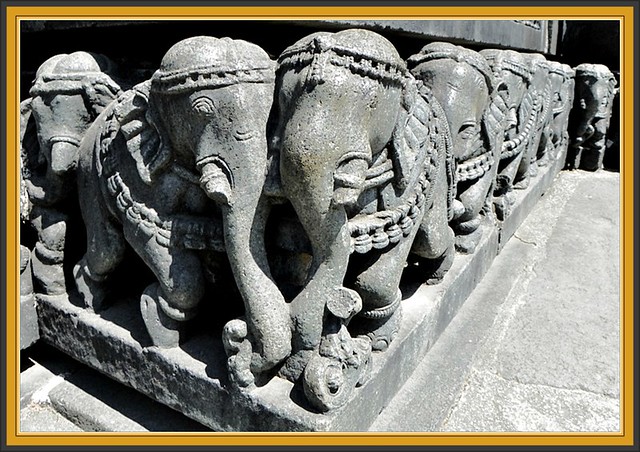 Pilgrims circumambulating the temple – 108 times, possibly for wish fulfilment [Mannat] purposes – unlikely to be for their morning walk ha ha! 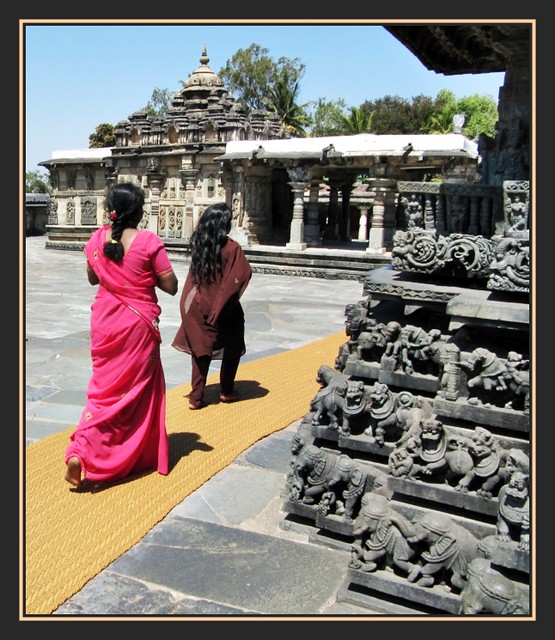 Carved Wall Panel – One of many 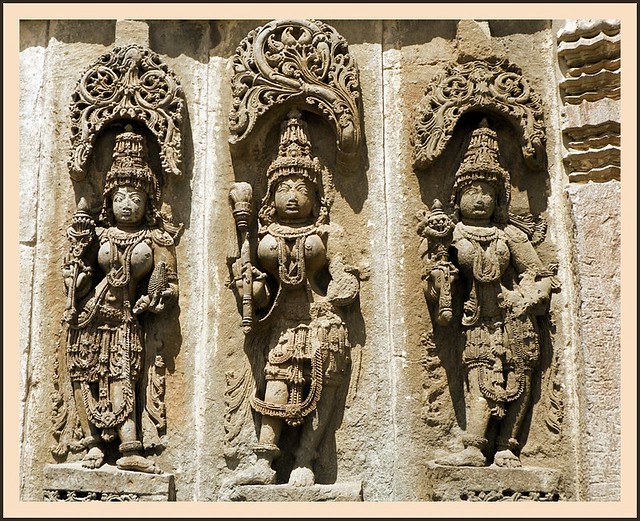 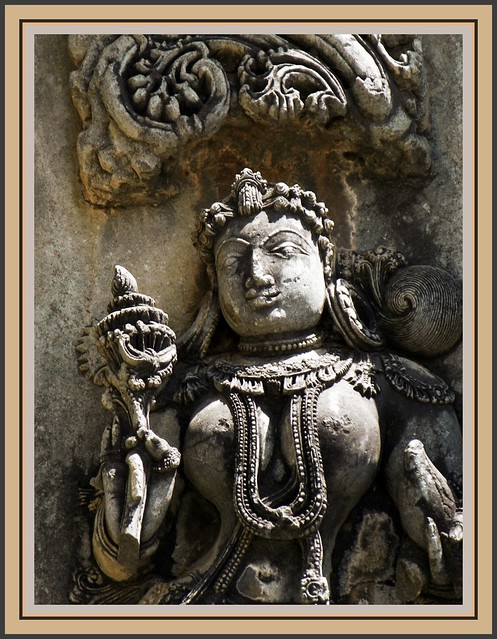 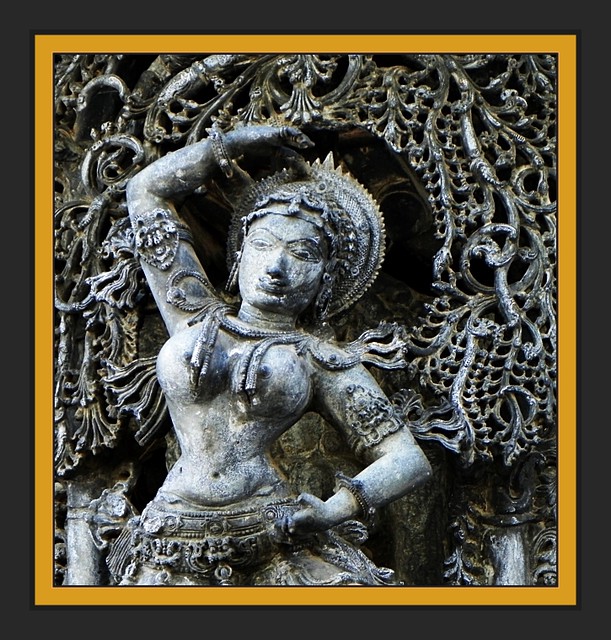 It is such a pity that none of our monuments are properly looked after. Look at these toilet bowls and sanitaryware recklessly stored amidst priceless sculptures in the corridor! 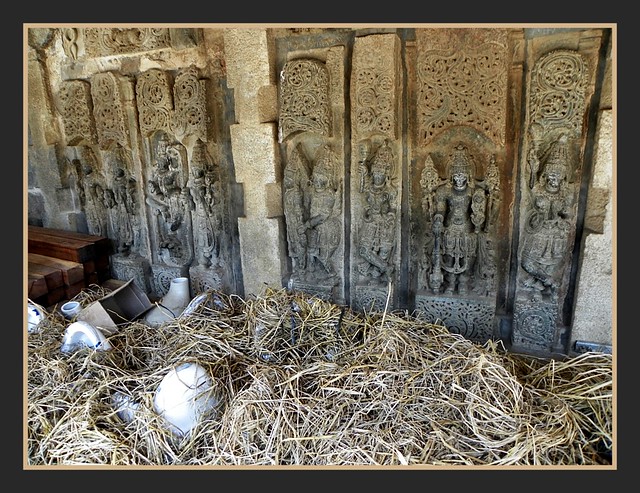 KSTDC offers a one day tour from Bangalore offering an hour each at Shravanabelagola, Halebid and Belur. I wonder how much they get to see. It may be excellent value and at the end of it one can boast of having seen all three places, but certainly an hour is not enough even for one temple. We took over three hours feasting our eyes on the intricate sculptures just at Belur. The Devi temple was closed otherwise it would have taken at least another hour. As Chikmagalur was a mere 20 km away, we proceeded there next. To our utter disappointment there was nothing there. Chikmagalur is just another small town. All the coffee estates , plantations and mountains are at least another 30 to 50km further away! We bought our quota of pure Arabica coffee but did not have time for anything else as we had to return to Bangalore.

The journey back was awful. We reached the outskirts in just over three hours only to get stuck in the roadworks at Yeshwanthpur for more than an hour. I do not recommend doing Belur as a day trip. It is really tiring. Somnathpura which is a scaled down version of Belur but with as many splendid sculptures, is so much closer to both Bangalore and Mysore. Much less crowded too …….

In comparison, given a choice between the big temples of Tamil Nadu’s Cauvery Delta and the Hoysala temples of Karnataka, I would return again several times to the former.

Bangalore is also Church Street, Brigade Road, Indiranagar, Koramangala, Malleswaram … ….. all with excellent restaurants, cafes and pubs. UB City with its podium level restaurants is like being somewhere abroad. But the essence of Bangalore remains the humble darshinis and small places serving mouth watering local tiffin and consistently good coffee.

Till the next trip.

Quick Trip To Bangalore And Belur was last modified: April 15th, 2020 by Gita AM

As we walked towards Piazza Venezia,we were greeted by a majestic white monument. The Vittoriano built to honour Victor Emanuel II, the first king of Italy, offer some breathtaking views of Rome . Built of white marble, the monument invited controversy for destroying a large portion of the Capitoline Hill . It also has the Tomb of the Unknown Soldier.