Pondicherry (now Puducherry) as a place has always fascinated me. After dreaming about visiting the place for many months, finally one day we decided to spend a weekend there. So after taking leave early one Friday, we started our road trip to my dream destination along with another couple. Its a six hour drive from Bangalore. Although the drive is not very exciting but chatting along the way we reached our destination at around 9 p.m. We had already booked two cottages at a beach resort ‘Banayan Beach Resort’ in Kottakuppam. This resort is one of the best places I have stayed so far in. It is located right on the sea shore and has a number of well built hut shaped cottages each consisting of a room with attached bath and a cute little verandah. The rustic cottages on the sea side built amidst beautiful flora and fauna and sorrounded with the enchanting music of the sea allow us to melt in the arms of mother nature. 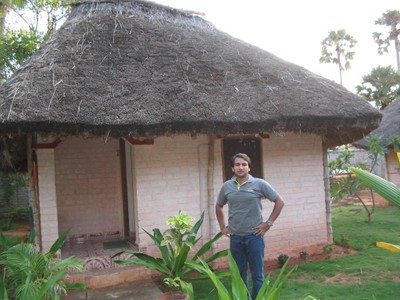 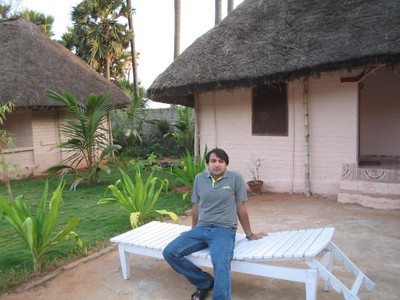 Sharp at 5 next morning we near the sea. This particular view of the sea was such as what I had not seen so far. The vast spread of immaculate water with thick waves rushing towards the sandy shore was a real treat to the eyes. The early morning breeze totally refreshened the senses . There was ocean spread far and across. We seemed so small and the everyday life looked so petty in front of it. It may seem exaggeration but it felt like I have seen God. We spent the next 2 hours waiting for the sun collecting sea shells meanwhile. The weather had played spoilsport and the cloudy morning made us miss the sunrise view. We had tea on one of the benches placed all over the facility and then started getting ready for a visit to one of the beaches.

Around 10 we reached the Paradise beach which is also called Plage Paradiso. It is located about 8 kilometers from Pondicherry near the mouth of the backwaters. A ferry sailed us to the sands through the backwaters. There were some tents pitched up on the beach where one can rest or just watch the sea or you could just walk up to the sea and play in the waters. It was a hot September day, the weather was not too accomodating but the waters were cool and we played a lot and bathed whole day in the clear blue waters of the neat sea beach lined with coconut trees. The best thing about Pondicherry beaches is that they are not too commercialised and the calm and serenity is apealing. In fact there are no food stalls and you have to carry your own snacks and water. After a relishing day spent at the beach we stepped out sailing through the backwaters again. Back in town we had lunch and then went to our cottage. After a short nap we were ready again to go around the town this time.

The town of Pondicherry is away from the hustle and bustle of city life. As we walked across the tree lined streets the French connection could be seen with the town boasting of a French architecture. Even some streets have French names. With spic and span streets that are lined in the form of grids, the place is a fantasy for those residing in big cities. We did some window shopping in the local market that has a variety of shops some selling interesting pieces of art. Also we found some bakeries that boasted of their French lineage.

Our visit to Pondicherry would have been incomplete without a walk along the Beach road. It has a children’s park and many monuments of historical value. One of them is a four meter Gandhi statue sorrounded by four magnificent granite pillars. Other interesting ones are the Nehru statue and the French War memorial, 19th century light house, French consulate and Raj Niwas. The most amazing sight was to watch the moon from the beach road. Its stupendous how in a single day we could experience so many things beautiful and enriching. Tired from the day’s explorations we retired to the bed after dinner but only after spending some time chatting near the resort’s swimming pool.

The next day we visited Auroville or the ‘City of Dawn’ about 8 kms from Pondicherry. This city was built by Mother, the spiritual collaborater of Sri Aurobindo.with the idea of a futuristic city where people of goodwill can live together in peace and progressive harmony, above all creeds, all politics and all nationalities. Around 2000 people live here with most of them being non Indians.History has it that during the inauguration ceremony of Auroville on 28th February 1968 , soil from 124 countries was placed in a lotus-shaped urn and mixed to symbolize universal oneness. This urn is today sited at the centre of an Amphitheatre in the Matrimandir Gardens . The Matrimandir’s 12-sided white marble Inner Chamber has a 70 cms diameter optical-quality glass globe at its centre, onto which a shaft of sunlight is focused by way of a roof-mounted heliostat. The light falling on the globe acts as a focal aid to concentration. We visited the Auroville visitors center to get a feel of the place and bought a few meditation CDs and historical books from the bookshop.

After a half day visit to Auroville we headed back to the resort and then back to Bangalore. Thus ended a short but extremely fulfilling trip, one that I consider one of my most enjoyable trips.

Once you have traveled, the journey never ends. The more you see the more you want to see. But in one lifetime we cannot see all that we want to see or to know all that we want to know. That's me! By profession I am a software engineer, otherwise I am a wife of my fellow bagpacker 'Vipul' and now a mom of eighteen months old 'Aeyan', hopefully a future bagpacker. I am fortunate to have seen many beautiful and interesting places in and outside India but there is still a long wish list of places far and across yet to be visited. Apart from this I like reading, writing and making friends.

DAY – 4 PAHALGAM next day the taxi driver came at 9 am. We left the hotel and started for Pahalgam. PAHALGAM is situated…