Puducherry(Pondicherry) is a small heaven just south of Chennai. Puducherry means “New Village” which it really stood out for us, a bunch of frustated lunatics looking for some fun. It was just a place out of the blue for us. Surrounded on all sides by Tamil Nadu but we didn’t find any resemblance between the two at all. People were quite friendly and humble. Maybe because it is a tourist destination and we were tourists but still i didn’t find any malice in anyone’s heart(of course except the police). 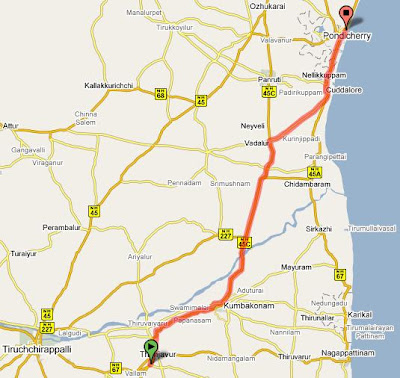 We went there just for the sake of food and eye candy. It was also our first bike trip. Maybe it was why the whole trip actually happened. The drive was a challenge in itself. We had no clue about the route that we planned to undertake. No idea about the roads or the places we were going to pass through but there was an excitement about the whole thing, hidden charm and a desire which fueled our passion to actually undertake the whole journey. There were of course doubts raised whether such journey could be undertaken at all but they were all swept aside by our passion.

It was all the brainchild of a single man Viral who single handedly planned this journey organized people and motivated them to go on. It was him who actually solved everyone’s doubts and apprehensions. I am really grateful that he undertook this journey and took me with him.

We were four people in total me, Viral, Puneet and Rohit. There were two bikes a Bajaj Pulsar 150cc and a Bajaj XCD 125cc. While we had full faith in Pulsar making the journey of about 180 kms I was not so sure about the XCD.

We started in the morning just as the sun rose. The weather was cool and just perfect for a long bike ride. We went to the Old Bus Stand and started the journey towards Kumbakonam. A bus conductor standing on the footrest of his bus guided us out of Thanjavur and onto the highway. After that it was quite easy just following the curved highway going through all small towns and villages. We had initially planned to go through Kumbakonam town but we discovered a new By-Pass Highway that had been built by the Jayalalitha government. The new by-pass was excellent, we just kept plying on and eventually crossed Kumbakonam in no time. We then caught with the National Highway 45C. This was quite straight and well built, and took us to Vadalur in no time.

On the way we crossed a dam on the Coleroon river (actually Lower Coleroon regulator) built by in 1941. I had never seen such large amounts of river water in Tamil Nadu before. Just before Vadalur a lot of construction work was going on the roads so it was quite dug up and slowed us down.

From Vadalur we had to take a diversion towards Cuddalore. The road was narrow but quite smooth to drive on. We joined the East Coast Road and entered Cuddalore. In Cuddalore we had to ask for directions to get out towards Pondy. After Cuddalore it was just a cakewalk, a straight road to Pondy.

In Pondy we stayed at a cottage in Auroville. Auro is actually in Tamil Nadu just north of Pondy. It is a part of the Auroville township of the world famous Aurobindo Asharam. The International township is just nearby so this place is always full of foreigners. The name of the cottage was Rooftop guest house and the caretakers name was Mr. Ram. It was quite a decent place to stay and cheap too. The place is just perfect as the beach is just a stone throw away and near to all the great culinary delights of Auro. But, it is somewhat far from Pondy and you might want to take a bike on rent.

We went to Swadistha first, as it was only 11 in the morning and too soon for lunch. Its a nice Gujarati snacks bar but this time the coffee was just Ok though the samosas were nice. I think the owner was tired or just not interested in some Indian kids. It is a place quite frequented by foreigners.

For the lunch we went to New Pizza Roof just behind the Beach Cafe on the ECR. This place serves nice food but the preparation time is huge. He usually prepares meals from scratch. Anyways it was the only thing that was open that time so we had no choice. We had two pizza Hawaina and Chicken Monaco and chicken and cheese omlettes.

Pizza Hawaiana is described as “pizza baked with tomato sauce , grated cheese , diced pineapple and chicken”. Chicken monaco as the name suggests had a lot of chicken both were quite good. There was also one Pizza 4 stagioni which had ham so we didn’t order it. We also had flamed prawns by the way and they were quite nice.

On the evening we were back at the Gandhi Beach and boy was it crowded. It was as if all Puducherry was there to celebrate something. Maybe it was a friday evening and after the Pongal holidays people were still in the festive mood. There was rush on every shop on the beach front. Ice cream and coffee shops were jam packed as if it was all free.

For the dinner we tried to find some tibetan restaurant but both the Tibetan Corner and the Lhasa were closed. So, we went into the Tio Tentacao, the sports bar. It is more appropriately the sports restaurant as it doesn’t serve any liquor. There is ofcourse a huge screen in the middle running your favorite tv channel, a pool table and a Darts corner. The main attraction is the Shisha which is a water-pipe for smoking just like a hookah. Except that there is only 0.02% nicotine. We tried one called Two Apples, it didn’t quite suit us. The next time when we went we tried the Grape one and this one was really good. My friends who smoke told me that this one had a really nice kick. They also serve exceptional food by the way. The chicken and cheese burgers, chicken cordon bleu, watermelon juice and banana lassi were all good. We didn’t like the Kiwi juice much though. But the caesar salad was awesome. We also tried mustard chicken and fried okra pepper. First dish is chicken breast with mustard fillings while the second is an appetizer made with lady fingers, cornmeal and buttermilk.

Paradise Pizzeria This place serves really delicious pizzas. They make their own cheese, pizza base, etc. They also have a five feet wide firewood oven, a thing not uncommon in Auro i also saw another just next to Frittes. We had Pizza The Mafia, Pizza India Special and Pizza Napoli. Mafia had pork, India special had chicken 65 and Napoli had some fish. They were all just fantastic. I have only one reservation about this place, it is only open during rush season.

Frittes This is a really cool open air restaurant run by a French family. Most workers are Indian but during rush you might find the owners family working. They make really good crepes, omlettes and coffee. You also get newspapers to read in the morning. The grilled sandwiches were also quite delicious.

Tibetan Corner is a restaurant run by a tibetan family on the same road as New Pizza Roof and Tio Tentacao. You can find Free Tibet posters inside. Anyways it serves classic tibetan food. The momos (tibetan dumplings), shabaglep(not sure of the spelling) both for veg and non veg palletes, are all very tasty and nice. The Tenthuk soup should come with a warning label in the menu. It is sufficient enough to cover one’s lunch. It was also served beautifully with a half fried egg (bulls eye) floating on top of the soup bowl.

Shanthi Inn is a restaurant and bar near the two wheeler rent shops in the heart of Pondicherry on the Nehru Street. It serves quite fine food and all the types of liquor you could need.

Next day it was time to drive back. This time it was easy as we had a general idea about the route and the roads. The shop owners by the road helped us whenever we were confused about which way to go.

Overall it was a very nice trip combining the pleasures of a road trip with a food holiday.

When you spend your time on the road, having information at your fingertips makes the task manageable. There are several apps that Indian travelers…