Jal Mandir is a work of art made out of white marble, where civil engineering and aesthetic sense joined hands together to create a poetry in stone. Art work in the ceiling was different from the other temple we visited on way. There was a lotus, but was a small one, pink coloured, unlike the nearly wall to wall marble work we saw in the previous temple. Even the gate, “Parshwa Sushil Dwar” was magnificent, where sculpture of mythological security persons and various religious symbols were depicted. 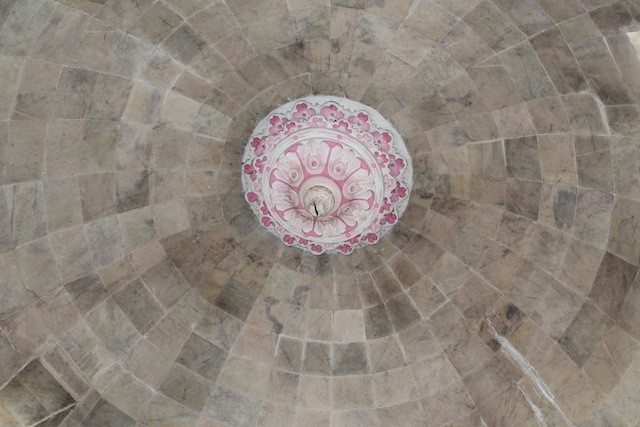 A locational map of tonks and temples in the Parasnath hill

Leaving behind the Jal Mandir, we proceeded towards Parasnath temple. It was situated on another hill. It took apprx 10 minutes to reach there. The temple what we see now-a-days is a new one. It was built over the ancient one, some part of which can be seen from the side before taking the stairs. 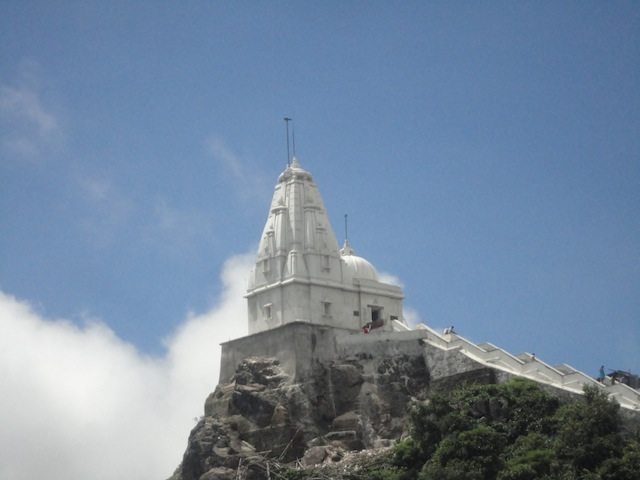 The Parasnath Mandir : A long view 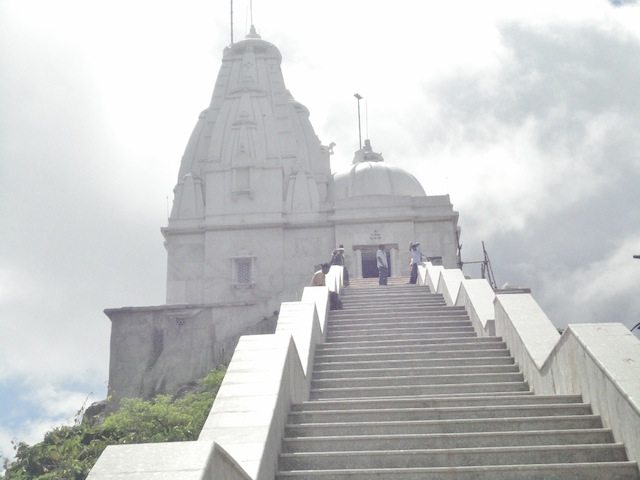 There was a long array of steps towards the entrance of the temple. Since it was rainy season, heavy cloud was intermittently covering the temple top. Even in cloudy atmosphere the white marbled temple was glowing. Like other Jain temples it was also clean. No dirt, no flower or leaf residues were visible. The temple is divided into two floors, each consisting of one chamber. In the upper floor, there was a small tonk, without any idol. We were disappointed, because in every Hindu temple we used to see lot of idols. The lower chamber was so low that one has to bow down to get into, where foot impression of Shri Parasnath ji was kept in black stone. Along the wall, a saffron coloured ancient sculpture of Shri Parasnath ji was kept, but it was only the face of the famous tirthankar. Here, one has to offer un-cooked rice, cocoanut, batasha as Prasad. Yatris were worshipping without flower, as we saw. 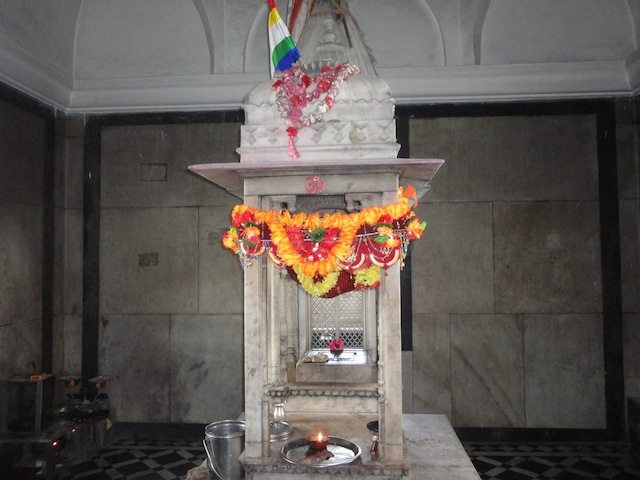 The Tonk inside Parasnath Mandir 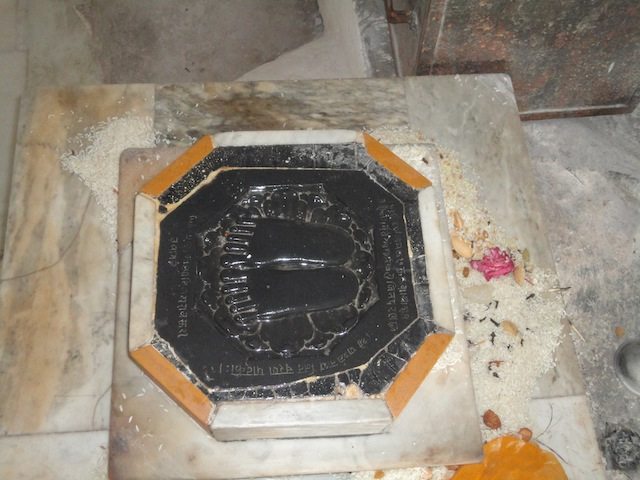 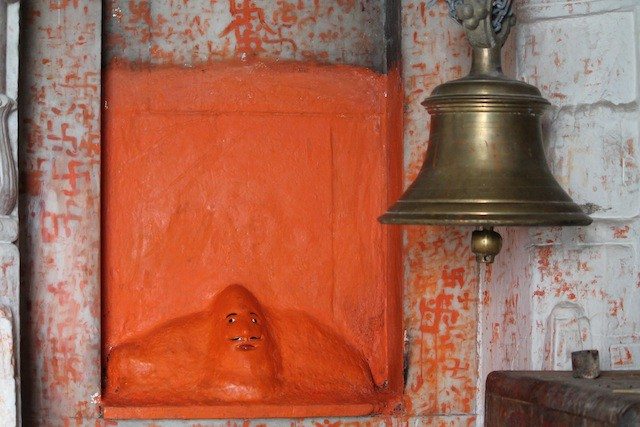 Outside the temple, the 360 degree view was havoc. One can see entire surrounding in a bird’s eye view. The NH-2 (G.T.Road) and the Howrah-Delhi rail line were clearly seen. Famous towns and jungles, like Madhuban, Koderma, Gomo, Giridih, Topchanchi forest etc. were also seen, but could be viewed better with a binocular. Course of a nearby river was also evident. 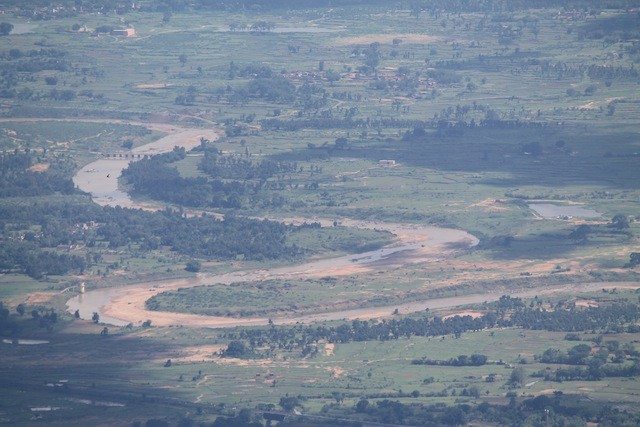 Zig zag course of a river flowing down the hill

As it was rainy season, we saw sudden movement of black clouds towards the hill top. We got frightened, as we neither had rain suit, nor umbrella. We were just backpackers. But to our relief, the cloud went away without making rain. 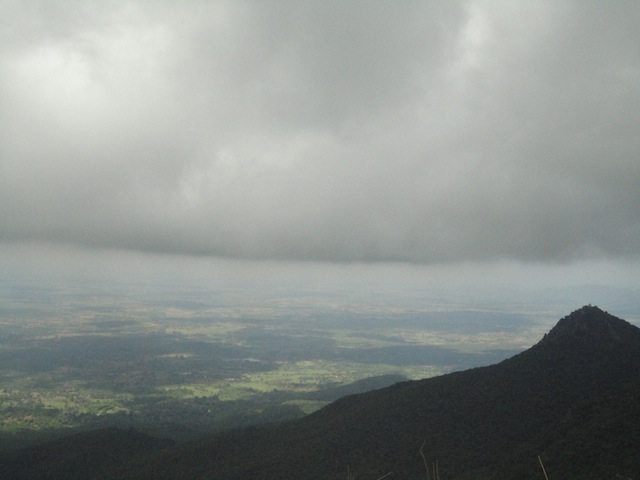 Since morning we were walking all along. We could not get any food, though felt high degree of hunger. We took rest for some moments after the temple visit. Seeing us in tired condition, some doli bearers approached us. Their doli was simply a stool hanging from a bamboo to be carried by two bearers. The passenger has to sit by folding his legs like lotus position. They agreed to carry us upto ground level @Rs.2000/- for Rajat and Rs.2500/- for me (the cost of being healthy was just Rs.500/- more). 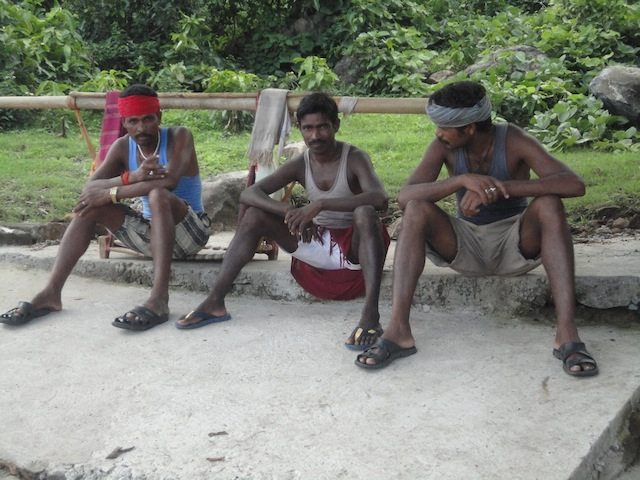 Our doli bearers, one was missing while taking the photo

During downward journey, in the absence of food, we had two glasses of sattoo sarbat (powdered gram mixed in water with sugar) for each of us. That was all for that day, apart from the small packs of snack we had in the morning during upward journey. The doli bearers had a typical rhythm of walking. Both the bearers had a stick with them. Stepping of the forward bearer was just matching with same of the other bearer. It was beautifully synchronised. Sound of hitting of their sticks on the road was coinciding every time. They were walking for 3 km to 4 km at a stretch and were taking rest for 5 minutes. Again they started walking. In this way we returned safely to Madhuban at 6.30 pm.

Interesting top of a temple at Madhuban 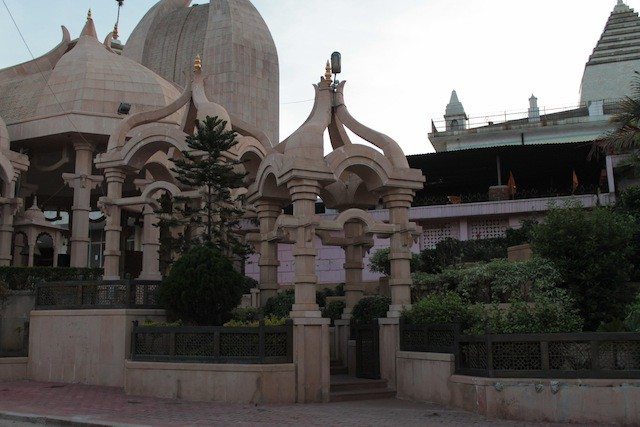 A Jain temple at Madhuban

Immediately on reaching the town we stormed in to the nearest restaurant. It was Hotel Sapna, where facilities for boarding and lodging both were available (Address : Madhuban, Shikharji, Dist-Giridih, PIN-825329, Mob 9431387282, Tel 06558-232234). We ordered rice, alu dum and a veg dish which were prepared in shortest possible time. We regained our energy, then roamed within the town until dusk set in. There were many Jain temples and museum in the town, which will please a tourist /pilgrim. Following are some of them :-

BHOMYAJI TEMPLE : Temple of Shri Bhomiaji Maharaj, the protector-deity of this pilgrimage. The temple is amply attractive. Inside the Kothi, there is the Jain temple in the form of a cluster of eleven temples.

JAIN MUSEUM : Shree Jityasha Foundation, Calcutta under the inspiration of Ganivar Shree Mahimaprabh Sagar Ji Maharaj, has built the Museum. On the first floor of the museum various things concerning Jainism have been collected. Just in front of the sprawling hall the most majestic 6 feet high idol of Lord Parshwanath in the meditation posture is auspiciously seated. All around on the walls there is an exhibition of pictures depicting Jain architecture. In the whole of India, this is the only museum, which contains a collection of all the postage stamps issued on Jainism. On the first floor, there is a collection of ancient art-pieces made of ivory and sandalwood. On the second floor of the museum, 50 scenes depicting special sequence of events of Jainism have been shown.


SHRI DIGAMBAR JAIN MADHYALOK RESEARCH CENTRE : This Research Centre, which has been recently built depicts the ‘Madhyalok’ or Central world as described in the Jain scriptures. The main building houses a massive statue of Bhagwan Shri Parshwa Nath in a huge hall suitable for prayers, congregations and large gatherings. A library is being developed along-with research facilities for Jain scholars.

TERAPANTH KOTHI : Temple of Lord Shree Chandraprabhu is in the middle. Samvasaran temple was on the left side of the third door of this temple. TWENTY-FOUR ‘TOONKS’ – On entering here first of all we come across the magnificent 25 feet high idol of Bahubali. Twenty-four Tirthankars have been built here. Samvasaran temple is built in this very temple-campus.

KACHCHHI BHAWAN : Fifty-two Jainalayas have been built here. This temple houses the idols of many Jain Tirthankars.

Beespanthi Kothi : Beespanthi Kothi was established to facilitate the pilgrims coming to Shikharji about 400 years ago. Bhagwan Parshvanath’s beautiful idol was installed in the temple. There are three compounds and eight magnificent temples decorated with sky – high artful spires, where Bhagwan Parshvanath, Pushpadanta, Adinath’s idol are installed as principal deity with many other beautiful idols. There is a huge dharamshala in this Kothi, behind which two temples are there in the garden. In front of Kothi, on a hillock, a magnificent huge temple exists, where a 25 ft high standing colossus of Bhagwan Bahubali is present in the centre of ground. There are 24 temples constructed in all directions with idols of 24 Teerthankaras. In the right and left side of this Bahubali Jinalaya, two magnificent temples of Bhagwan Gautam Swami and Parshvanath’s Jinalayas are existing, and a 51 ft high Manastambha (Column of dignity) is standing.

There is a dormitory at the foot of Parashnathji, for which you have to take permission from the Bharatbarshiya Digambar Jain Tirthashetra Committee at Madhuban, Branch Office – Madhuban, P.O. Shikharji, Dist-Giridih, Jharkhand. Pin-825329, or can contact Ph-(06558) -232270 (office), -232265 (Yatriniwas). This is especially for Jains.

Then we returned to Niharika lodge and took rest for the night. My recommendation to persons desirous to visit Parasnath is that, keep one complete day for visit to the hill, another full day to local Jain temples and museum. Planning in that way may do justice to the trip to Parasnath/Madhuban. 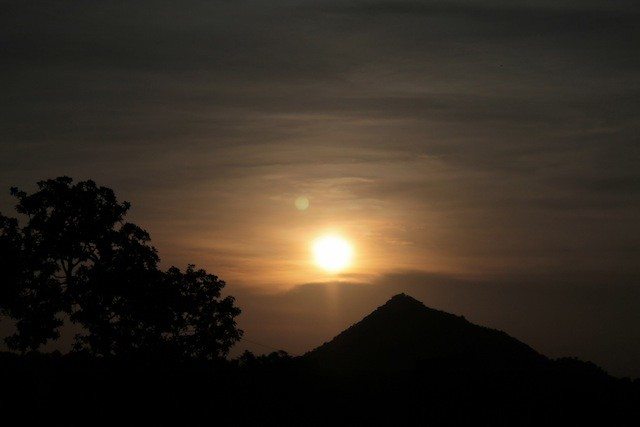 Sunset at Madhuban, keeping Parasnath hill in the background

24TH June 2013
Next day at 4.15 am we started our return journey from Niharika lodge for Gomoh station. We took a Mahindra Max, which took Rs.1,000/- lumpsum for the 1 hr 20 minute journey. During the journey through the NH-2, we saw a total bare body middle aged person, supposed to be of Digambara community, walking down the road. That must be a usual sight at that place, because pedestrians were not taken aback by the sight. 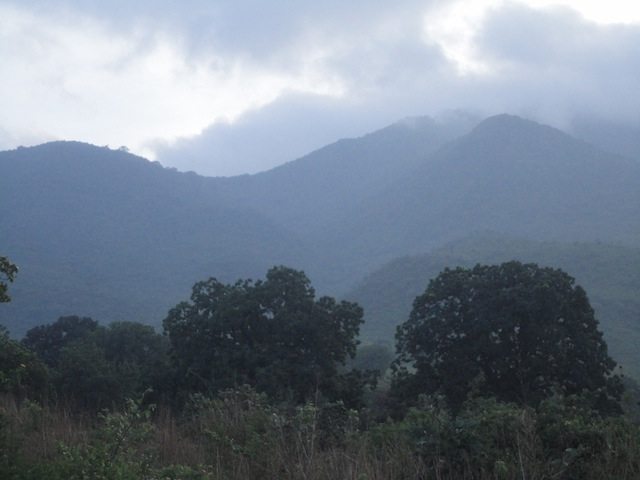 Parasnath hill from G.T.Road, next morning, while going to Gomoh

Gomoh railway station was renamed Netaji Subhas Chandra Bose Gomoh railway station in 2009 in honour of Netaji’s long journey from Gomoh railway station out of the British Empire in 1941. This place comes under Dhanbad district. From here we took the 6.50 am train which goes to Kharagpur. Fare was Rs.15/- only, upto Santaldih – my destination. Anyone wants to have a close look of the opencast colliery area of Jharkhand, may take a window seating ride. We got the complete view but did not take any photo because of the rush in the train and incoming dust which might pose a threat to my camera. At quarter past 9 am, we safely reached Santaldih.

Following are the addresses and phone numbers of accommodations at Madhuban, which may be helpful to the readers :-

Nimiya devi served tea during our ascent to hill top. Don’t miss the khatiya kept at the stall for the yatris for free. One can sleep for hours long. 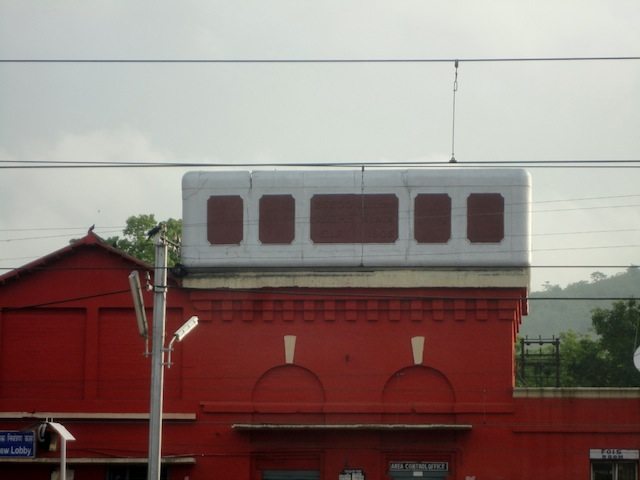 Innovative water tank at Gomoh railway station, which was made so many decades ago 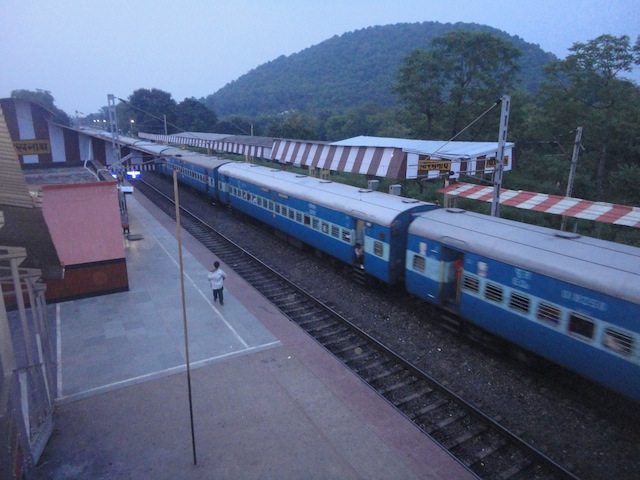 The best thing one could do is to spend time at the beach. To access beaches, one has to travel to Panambur beach (20 kms) or Ullal beach (13 km). To reach Ullal beach , take the Mangalore-Kasargod road and look out for the board for Ullal beach. This is also called Someshwara beach. The waves lashing out at the rocks in Ullal beach makes a good treat for the eyes.