In the journey of life, we do get many friends in different phases of time. Amongst all, friendship with old school mates stands tall. One of my class mates, namely Kaushik, is presently Chief Engineer (EMT) at Mangdechhu Hydro Electric Project, Langthel, North-Central Bhutan. When he invited me to have a visit at his project, I could not resist it. I immediately contacted another old friend Anjan and chalked out a crisp programme with him to go to Bhutan.

Journey From Kolkata To New Bongaigaon
It was middle of May 2017, so there was less pressure in office, as annual audit rituals just concluded. Bhutan being a SAARC country and having friendly relation with India, getting permit to visit is relatively easy. Kaushik took all the burden for doing the homework for our entry. Once that was over and he informed us, me and Anjan caught Saraighat Express (12345) from Howrah at 3.50 pm on 14th May 2017.

Journey From New Bongaigaon (Lower Assam) To Gelephu (Bhutan Border)
Next day morning, we got down at New Bongaigaon junction station amidst drizzling rain. The climate was typical of Assam, full of pure fresh air, plenty of greenery and cool atmosphere, just to rejuvenate us. It was very much welcome to us, as the condition at Kolkata in mid May was just opposite – too hot and humid. After taking a flash breakfast, we took a pre-booked car upto Gelephu border. It may not be out of place to mention that if you want to go to western / north-western Bhutan, you have to go through Phuentsholling border gate. But if your destination is central / north-central Bhutan, it is better to immigrate through Gelephu gate. 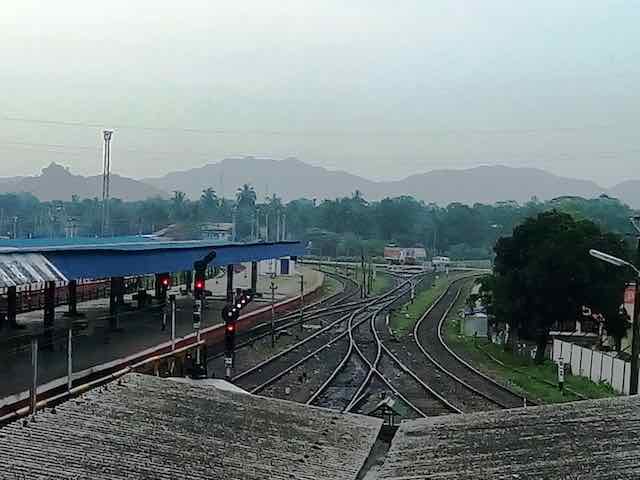 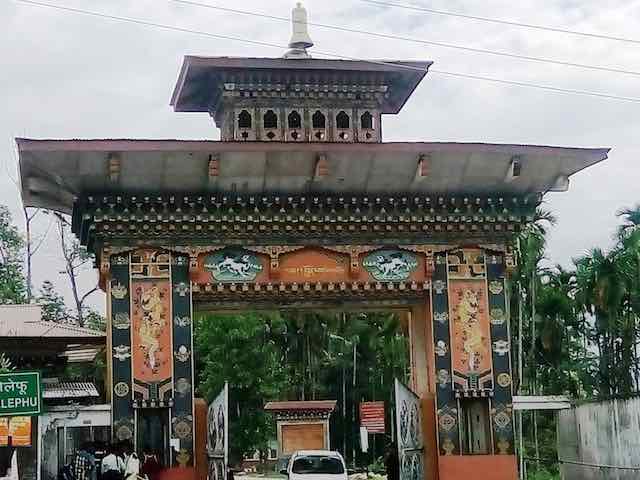 The welcome gate at Gelephu border

We reached Gelephu border gate at 8.50am IST, though as per Bhutan time it was 9.20 am. My friend Kaushik was waiting over there to greet us. Then immigration formalities started. At the gate itself there was a screening office. After getting through, we had to go to Immigration office in Gelephu city for main formalities. One has to carry original Passport or Voter Card, photocopy of the same, two passport sized photographs to comply with immigration requirements. It took almost an hour for taking fresh photograph from a local studio, filling up forms, completing the biometric recording and getting the permit issued. 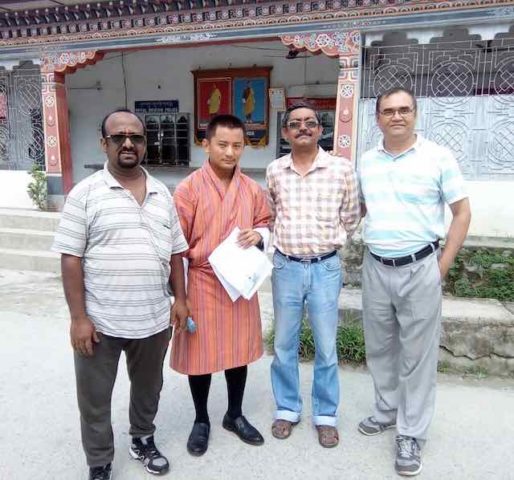 Outside the local screening office at Gelephu – (from left to right) Anjan, the official of immigration office, Kaushik and me

Local Flash Trip At Gelephu
Gelephu is a small town placed on plains, situated at 220 meter elevation from MSL. Here you can find all amenities for modern living like hotel, bank, post office, photo studio etc. The local market was full of all kinds of goods and items for domestic requirement. It may be mentioned here that many of the business establishments are in fact run by Indians. Apart from the market and immigration office, there were many Govt offices.

We took a complete pre-poned lunch at Hotel Ashoka and had a snapshot view of the town. Just beside the market, there was a clock tower at a central place. Just a few yards from the tower, there was a Buddhist temple. We also visited a monastery, where a big statue of Lord Buddha graced the ambience. From Gelephu, one can visit Royal Manas National Park, Jigme Singye Wangchuk National Park etc. 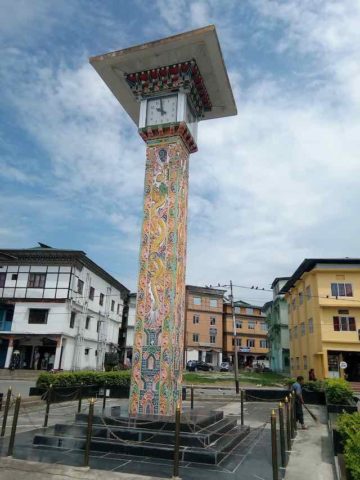 The famous Clock tower of Gelephu 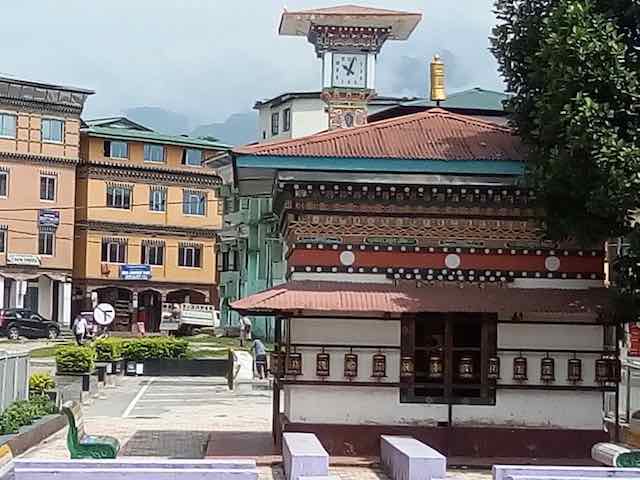 The clock tower, Buddhist temple and Gelephu market in a single frame 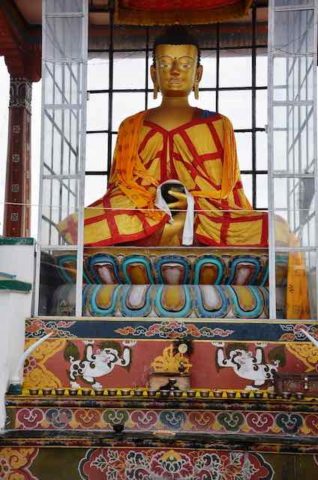 Statue of Lord Buddha in a monastery at Gelephu

Before starting our journey towards interior of Bhutan, we collected many items from the local market covering our forthcoming stay at Bhutan. Then at 11 am IST, we started our journey to Langthel.

Journey From Gelephu (Bhutan) To Langthel (Bhutan)
The journey from Gelephu to interior Bhutan is a long one, but full of variety. At the start of the journey we had to show our permits and make entry in the check post situated by the river Mou Chhu. It will not be out of place to mention here that in Dzongkha (Bhutanese language) a river is called Chhu. Then we entered into the green world. Leaving behind the commercial and domesticated area, we followed a glass top asphalted road going through natural forest. Since elevation is less in this part of the range, entire road journey was through evergreen forest. It means that this area receives enough rainfall every year to keep the greenery alive.

With the passage of time, mother nature continued to appear before us with a new look at regular interval after crossing some distance. View of the surrounding mountain range was quite entertaining and did arise enough interest in me, because by default I am a lover of the Himalayas. 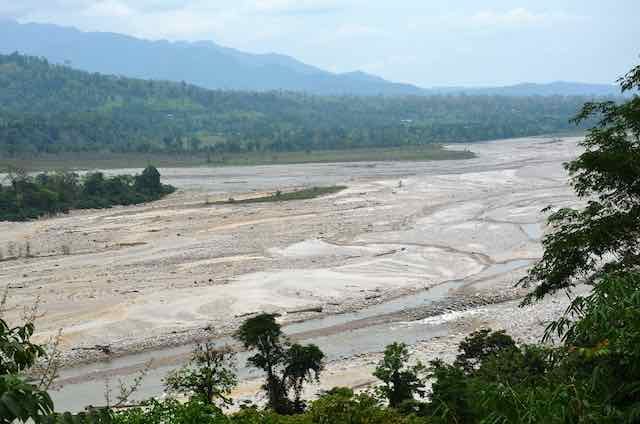 View of the Mou Chhu river from hill side

At around 12.50 noon IST we passed an astonishing area. The wall of the hill extending to a substantial distance was full of innumerable bee-hives. The wall was bare, free from any kind of plantation. Before entering the area we however saw a notice board mentioning warning message to this effect. So we kept the windows of the car closed till we crossed that stretch quickly. An attack by even a small insect in a narrow hilly road can prove fatal at times. So it is always better to be adequately careful.

View of the Beehives hanging from the wall of a hill

Then at approximately quarter past two (IST), we dropped at a small picturesque town on way called Tingtibi, Zemgang. Many a single storied and double storied houses were placed along the slopes of the hilly area. We had another short spell of Tibetan snacks at a homely restaurant called T-Wang Hotel and restarted our journey. 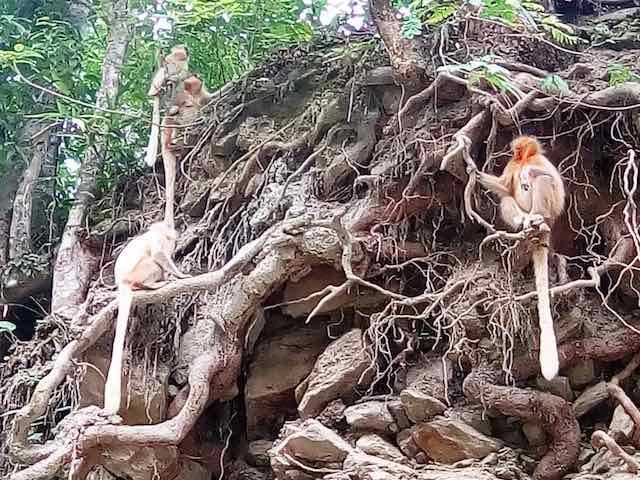 The exclaimed Golden Himalayan Langoors looking at the awestricken visitors

Exactly after one hour we were passing through another forest, where we saw a lot of Himalayan Golden Langoors taking rest at a nearby tree. They had thick golden beard and similar long tail as well. End of the tail was thicker than rest. We stopped our car, kept window panes down and started to take photos. Once they saw our camera and noticed our outbound heads peeping out of the window, they started to jump out of the area. Within 15 seconds none of them was there. So we had to continue to move ahead towards Langthel. 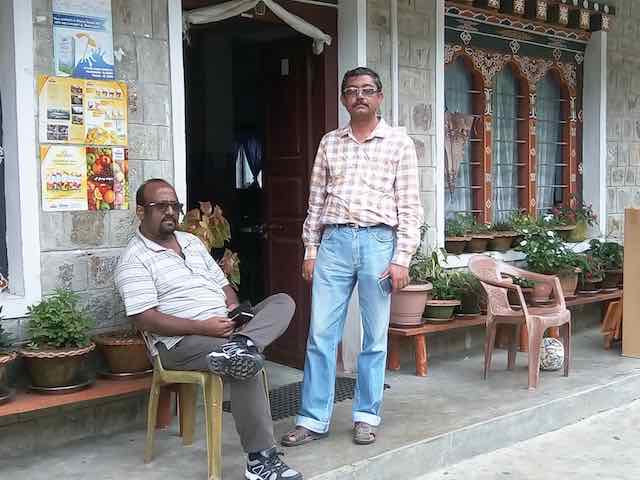 Stopover at Tingtibi town to have a snack break

At 4’o clock (IST), we could not but stop by a very beautiful place called Koshala to have a tea-break, as we were experiencing headache in the absence of tea. This place had a hair-clip like u-turn along the hilly stretch. At the centre of the u-turn there were small hutments and sitting benches. It was already getting darker. Distant hills started to get engulfed with white clouds illuminated by the tilting sun. So we had to make the tea session shorter to resume our journey to Langthel. 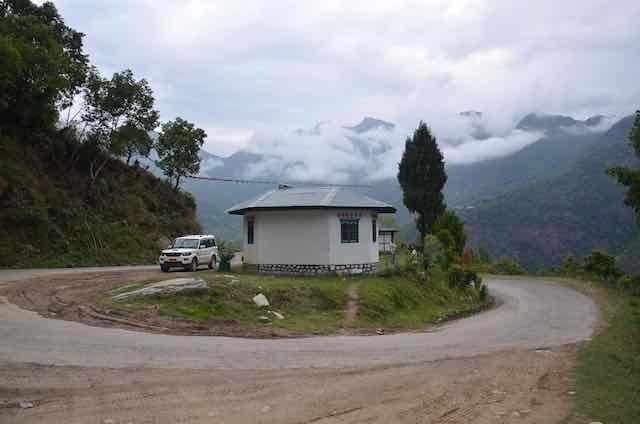 The picturesque U-turn of the road at Koshala

The car ran faster in this part. While passing serpentine hilly roads, we noticed many buildings, storage sheds situated on the opposite hill belonging to the hydro project authority. Amidst the evening twilight, we reached the destination after completing the six and a quarter hour’s journey from Gelephu. The car stopped in front of Office of the Chief Engineer (EMT) at 5.15pm IST. In the office, while taking a very welcome cup of tea, I was fortunate to meet my old colleague Gautam of BHEL, who dropped in there coming from another hydro project site of Bhutan. These gentlemen being hydro project specialist, immediately started discussing official issues. But I was damn tired.

Since early morning, after getting down at New Bongaigaon station, we travelled throughout the day, covering many districts, many towns of the two nations. So we put to an end to the chit chat session and moved to the area of residential quarters constructed along slope of the hills. Kaushik explained that the opposite hill was the famous black mountain covered with thick un-conquered black forest.

It was already dusk. We failed to notice when the erstwhile blue sky turned into blackish violate. A lot of slate-dark cloud gathered high above, only to increase suspense of the situation. Some night birds were warming up here and there. Crickets started to play their nagging monotonous sound from behind the bushes. The serious and grave looking black forest posed a very mysterious appearance, as if it was beckoning with its hands. I started to feel magnetised to all these, so I preferred to get into our quarter.

Reached Langthel at last after the daylong journey. From left to right – Gautam, myself, Anjan and Kaushik sitting in the Office of Kaushik – The Chief Engineer (EMT)

We spent the late evening while gossiping in relaxing mood. It was decided that we will visit the under-construction hydro power station the next day. I was excited, because that will be my first such experience. The construction work was going on inside a hill, nothing of which can be seen from outside, except the tunnel mouth. So with much ecstasy coupled with unknown thrill I went fast asleep.

03 July 2011 After all the prayers were done, we came out of the temple and stood near the stream of mighty Yamuna, while…