Sometimes you are just highly confused about everything going on in your life, you imagine being part of a circus, running around things which you don’t even know that why you want them. Mostly people relax and try to figure out what’s wrong and where, but I thought let’s get out and travel. It has been some time that I have not travelled and with my new Royal Enfield Thunderbird, I wanted the first trip to be a memorable one. Tried to look out for options of a one day trip around Delhi but no blogs and no magazines had anything decent, picturesque and adventurous. After a long time I was able to finalize on Neemrana Fort and convince my friends to accompany. Well Neemrana is around 120 odd km from Delhi on Jaipur Highway. It’s an industrial place where Japanese companies have their own township. We were shocked to see a full Japanese city in India. Not just this, but Neemrana has a fort too, It is the site of 16th century hill-fort occupied by Chauhans till 1947. The erstwhile ruling family is considered to be the direct lineage of Prithviraj Chauhan (quoted from Wikipedia).

Well the Neemrana fort trip was also a first bike trip for few of fellow travellers, but the main ingredient of the trip was ZIPPING at Neemrana fort. Neemrana fort is itself a picturesque spot and a luxurious hotel too. In fact there is a entry ticket to this hotel i.e. 500Rs per adult for a 2 hour visit to the landmark hotel and fort, the parents can accompany 2 kids with them on their tickets. But if you go zipping with Neemrana then the entry ticket is part of the trip fee which is aroud 900 if you buy them online. We started our journey early morning at 6 just to avoid traffic, heat etc and took the DND flyway from noida to take NH8. 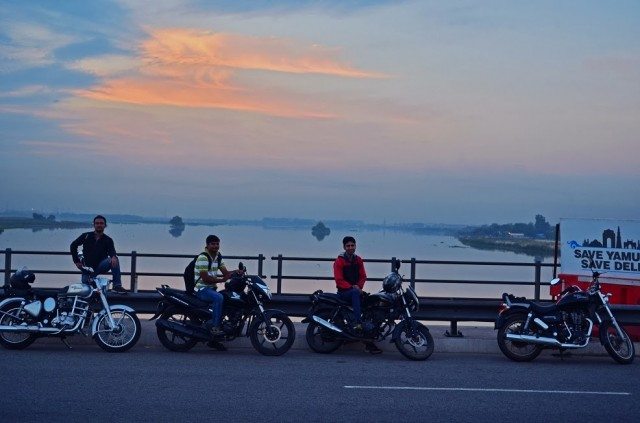 We had Ankit, Avinash and Sumaila joining us from Munerka. So at around 7 we had crossed the Gurgaon toll and were on our way to Neemrana. We halted at Haldiram’s which is around 60 km from the Gurgaon toll bridge but that 60 km had taken a lot out of us as the highway really sucked. There are lot of flyovers under construction, a huge truck line follows you everywhere and the dust and heat will always be there to do a creamy facial. By the time we reached Haldiram’s my grey shirt’s collar had turned black. In that sweaty mood and dirty face we were just looking for some good food but Haldiram’s had more to offer. The moment we entered the door we saw girls from the fairy tales walking around carrying chole bhature in their hands, smiling, chatting, luring us more and more towards them. We controlled our emotions and started looking for a nice seat, preferably closer to, you know what, but the whole ground floor was full and we had to occupy the first floor, yes and then we enjoyed the TOP VIEW. We had our stomachs overflowing when we came out of the door but a lot of them had left their hearts inside, even I had fallen in love with 6-7 girls in that very hour. Rest of the journey was no different, the same dust, the same trucks as if they also had breakfast with us. We were able to reach Neemrana by 10 and the fort by 10 30. As soon as you enter the Neemrana, just opposite to the Japanese colony is an underpass below the flyover from which you have to take a right turn. Any local guy can help you out with the way and also there are sign boards available. Parking is free at the hotel and a vintage Rolls Royce Phantom is always parked caged inside a glass chamber. By this time my top half of the grey t-shirt had turned black, our faces almost unrecognisable and our our eyes amused at each other. 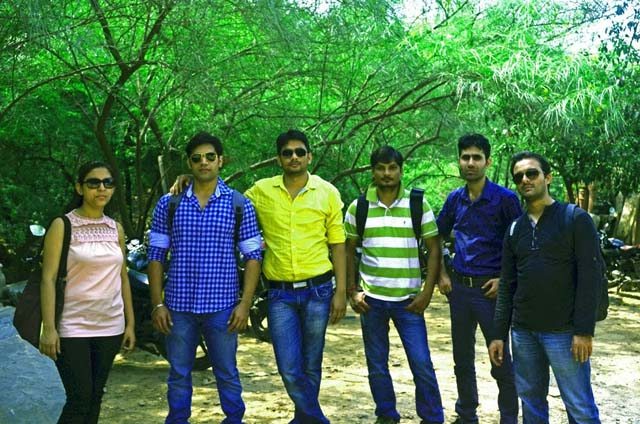 The fort’s entrance itself will give you a royal feeling, the guards all dressed up in traditional dresses and the fort’s view from the bottom gives a majestic shadow to start your journey up. It’s an old palace turned into a hotel and every single room has a unique name, including the toilets. 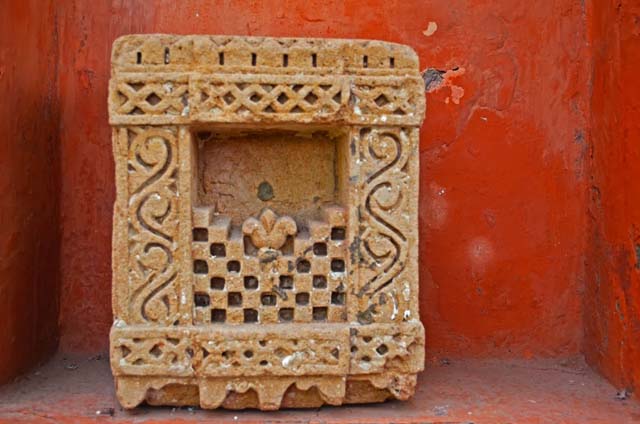 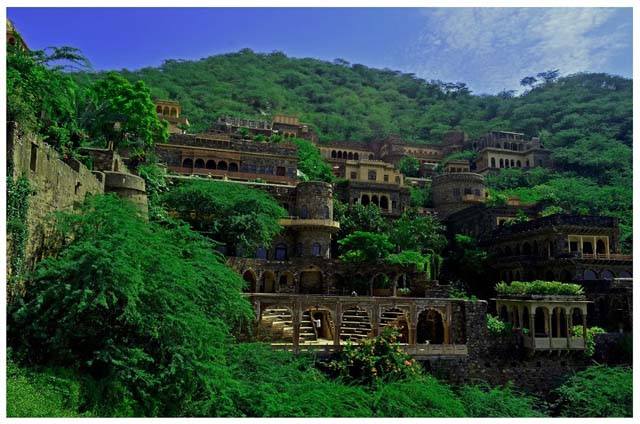 Fort’s View from one of the galleries 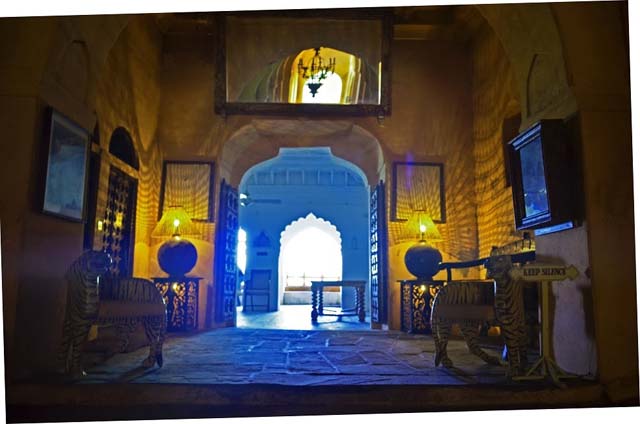 A Chamber of Secrets

The whole way to the flying fox office which is inside the fort is garland by old artefacts, enchanting views of the fort and dark walkways. At the flying fox office you need to show your tickets and the rest all will be done by the generous staff, they will help you wearing the gears, give you water bottles and accompany you to the top of the hill from where the zipping starts. It’s a short trek up of about 1-2 km and it takes you to the point where you can enjoy the whole cities view and the other low lying hills. The crew trains people and does not starts until every single person has practised once correctly and are confident to start. After some falls, jokes, confusions and finally a lot of smiles we were all set for our first zip. Below is the pic of the view from the top, with the zipLine peeping from the top left. 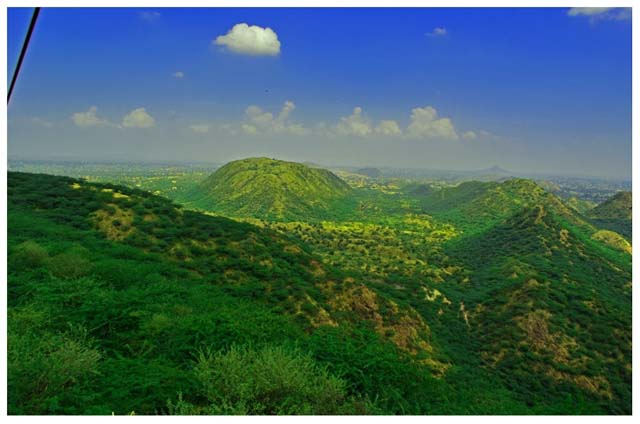 The view from the top of the first launch site

In all there are 5 trips with the second one being the longest, 400m. On the second one no one was able to slide along the full zipLine and everyone found him/herself stuck somewhere in the mid of the track. Below are the pics of the people hanging in the middle of the course :p (and the spirits and camera still making them smile). The most interesting incident happened with our respected Sumaila Khan, she was stuck in the middle and was not able to pull herself back, so our trainer Robin went ahead to pull her back. She was able to reach the landing spot with his help but as soon as he left her she slid back again to the same spot. We thought this would go on and on, but somehow in the second attempt she held on and managed to land safely. 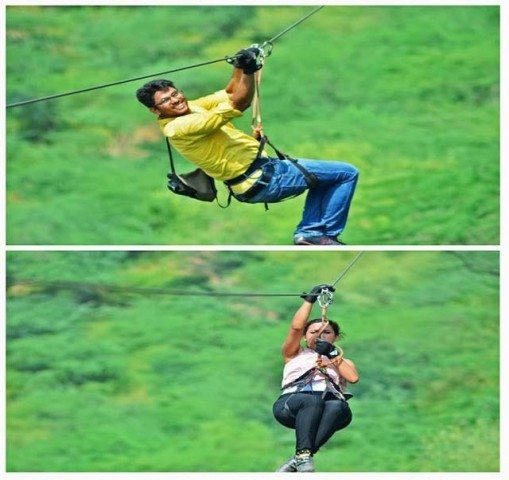 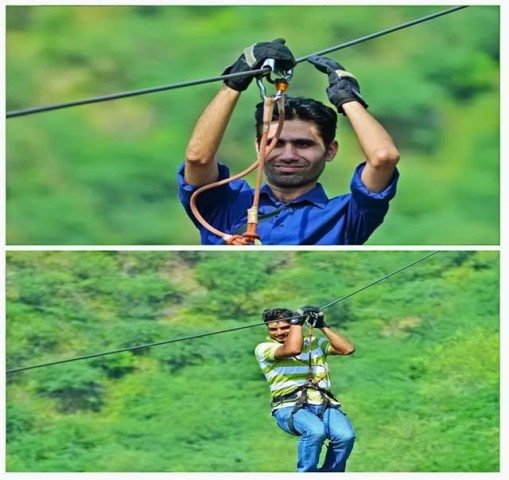 After this all the zips looked pretty easy, and everyone was full of confidence and joy. Soon on the last zipLine the last person also landed and it was all over. We left the place after 2 hours of scintillating adventure and an unforgettable experience with some forever cherish able memories. Once we got back to the office we thanked the flyingFox guys who are always supportive and very well mannered (though we were not). We relaxed for some time and went ahead to exploring the whole fort. There are lot of sections in the fort with some empty rooms too. We occupied one, sat there a lot of photo-shoots and then were about to leave. People can plan out for a lunch there too, as per the reviews on internet it sounded good for an authentic Rajasthani meal and in an ok price of 700/ person for the buffet. Clouds had covered the sky by that time making the day quite humid and the fort too beautiful. 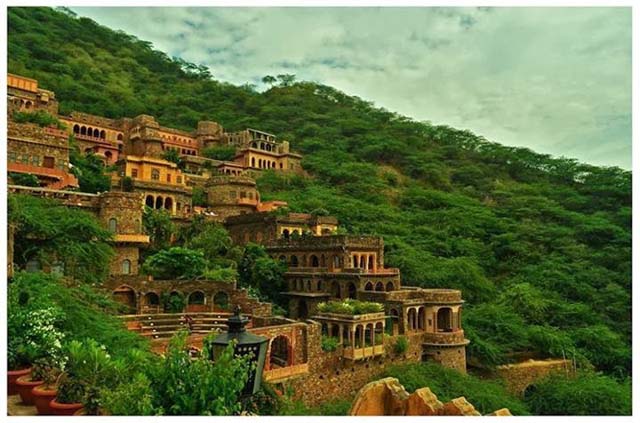 We left for way back by around 3 so planning to have dal bati somewhere in the middle. Just before touching the highway we stopped for tea, rejoiced and in no time infront of us was a huge traffic Jam. We somehow managed to escape and the halted again at a so-so dhaba for dal bati. The place was getting renovated but the prices were quite high compared to the place and quality, still we enjoyed the dal bati choorma. As soon as we were about to start I realized that my elbow guard was lost. What everybody was expecting that I will forget some or the other thing like all other previous trips, hence I disappointed none. I rushed back to the fort looking for it at the parking, then asked the guards, and luckily some guard had found it and kept it safe (phew!!). So finally with all gears rocked up, we started our journey back which was again full of pollution, dust, dirt and traffic. Somehow we managed to reach gurgaon toll by 7 and the trip ended for us. 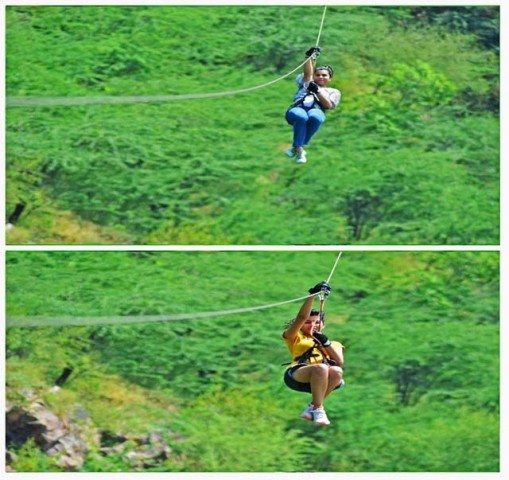 All in All a totally new experience for everyone of us and a day well spent well travelled and well enjoyed. Below are the pics of the two girls who accompanied us in the zipping experience and if any one of you are seeing this then I have more pics of you guys. And especially to the yellow top girl, I was a fool not to ask your name, emailId or fb id, and I haven’t forgiven myself yet for that.