With a weekend in hands, bike in garage and camera lying next to me on bed, the only thought that woke me up that night was what to do with all of these? The answer was floating around in Google and hence I decided  Jayamangali Blackbuck reserve is the best place to exercise everything. With none of my friends willing to join, I was almost sure to go alone, but just one day before the actual plan, I decided to put it up on meetup.com. To my surprise I got great responses, and finally two people Rajath and sameena were ready to join me on the visit. I asked my college mate Anupriya also to join and hence we were four to rock towards Madhugiri. We left bangalore by 4 am to make sure we reach the place by sunrise, probably the best time to spot animals.

So in a famous saying sannate ko cheerte hue we were riding towards Madhugiri. We took the NH4 tumkur road and followed it on till 40 km from bangalore, where there is a right turn below the fly over for Madhugiri. The temperatures were too low and thanks/curses to a mad driver who showered filthy water on me and Anupriya. We stopped there and that was the moment when Rajath realized how badly he was missing his Jacket. Had a cup of tea and went ahead on the dark roads to the destination. For about 20 km the road was fine but then the Karnataka government showed it true colors and the state highway adventure was on. Dawn was at the corners and the graphite monsters of the region were haunting with their black shadows. The road gives a feeling of riding along a valley and the pre-morning weather really adds to the flavor. To avoid freezing breezes from making us senseless we were riding slow and hence saw the sunrise before reaching the reserve. Around 6:30 we reached Madhugiri another 30 km from there was the blackbuck reserve. The road starts vanishing after that as the local farmers use it to dry hay, and I wondered, am I the first one to use this road as a road?  We reached to the last 4 km for the reserve which is marked by a sign board. As soon as we took that right turn, the curious Blackbucks welcomed us. We saw a huge group running from us, and decided to reach the place with thoughts that they will be more there. The forest office there is just one room, which even offers place to stay. We went ahead for a walk along the forest and discovered there is no water here and hence pretty hard to actually observe any creature out here. We saw an observation tower and rushed towards it. The view from there is ecstatic, for few moments you would just be with yourself, no disturbing sound, no signs of pollution and a lush green spread of crops enhancing the view. 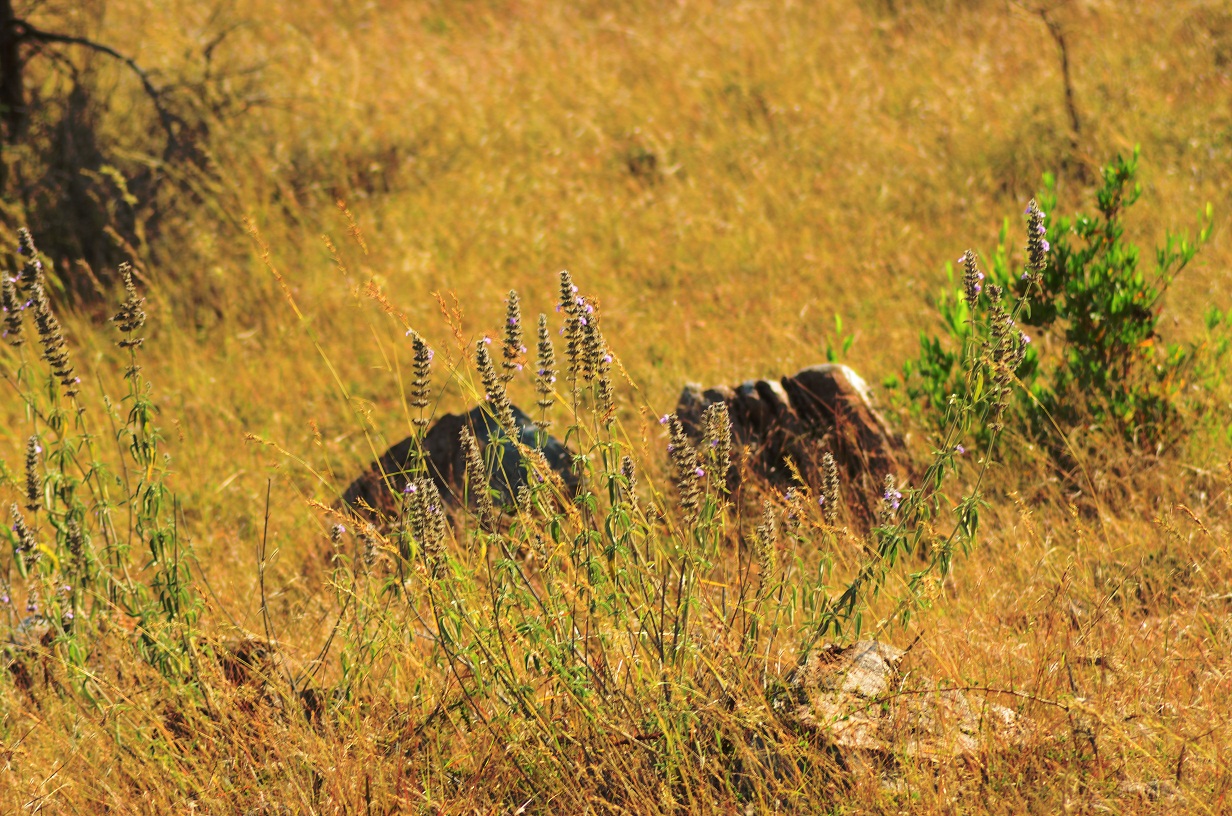 Paddy Field in the Reserve

There we got the first close looks of a blackbuck grazing, but that was probably the lone grazer there. With the sun proving Rajath’s decision of not bringing jacket good, we decided to get out and look for blackbucks where we originally spotted them. To our surprise even after 9 30 they were waiting for me take their clean shots, and this time I didn’t miss out. 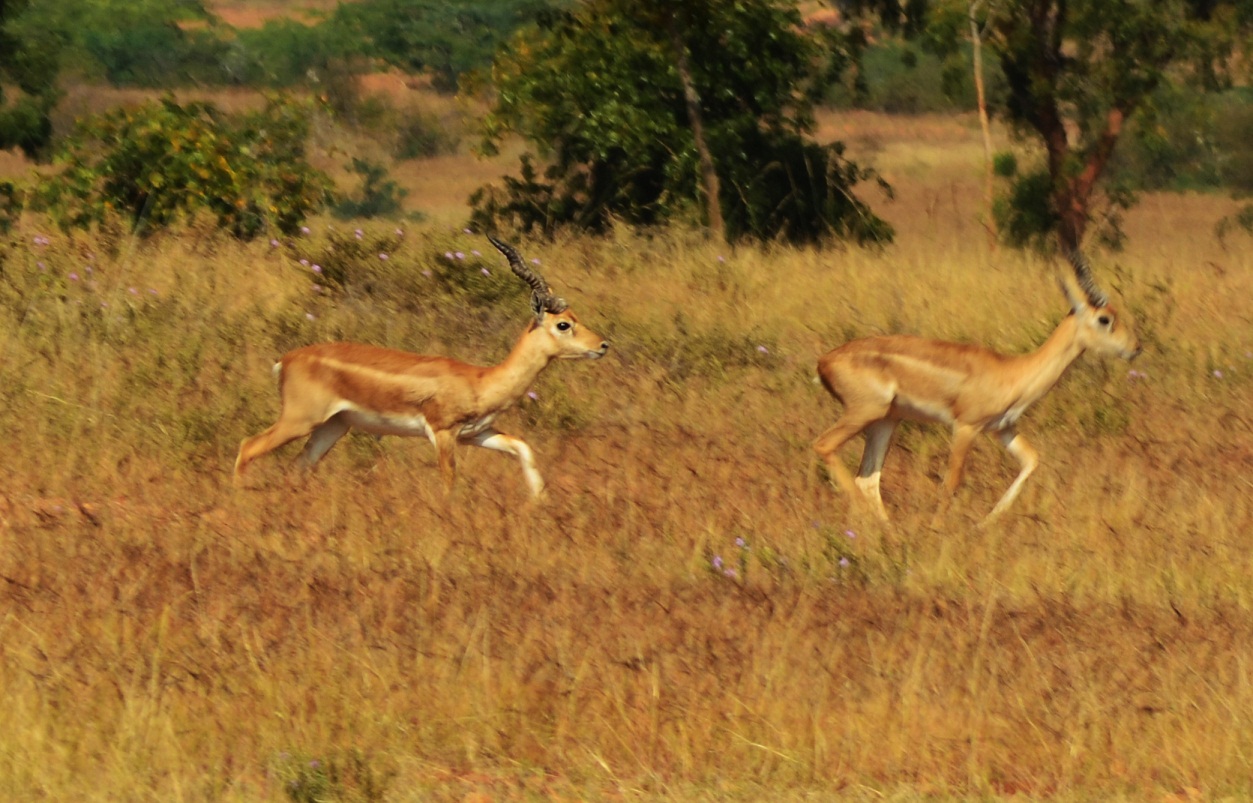 Bucks running around, our first spotting 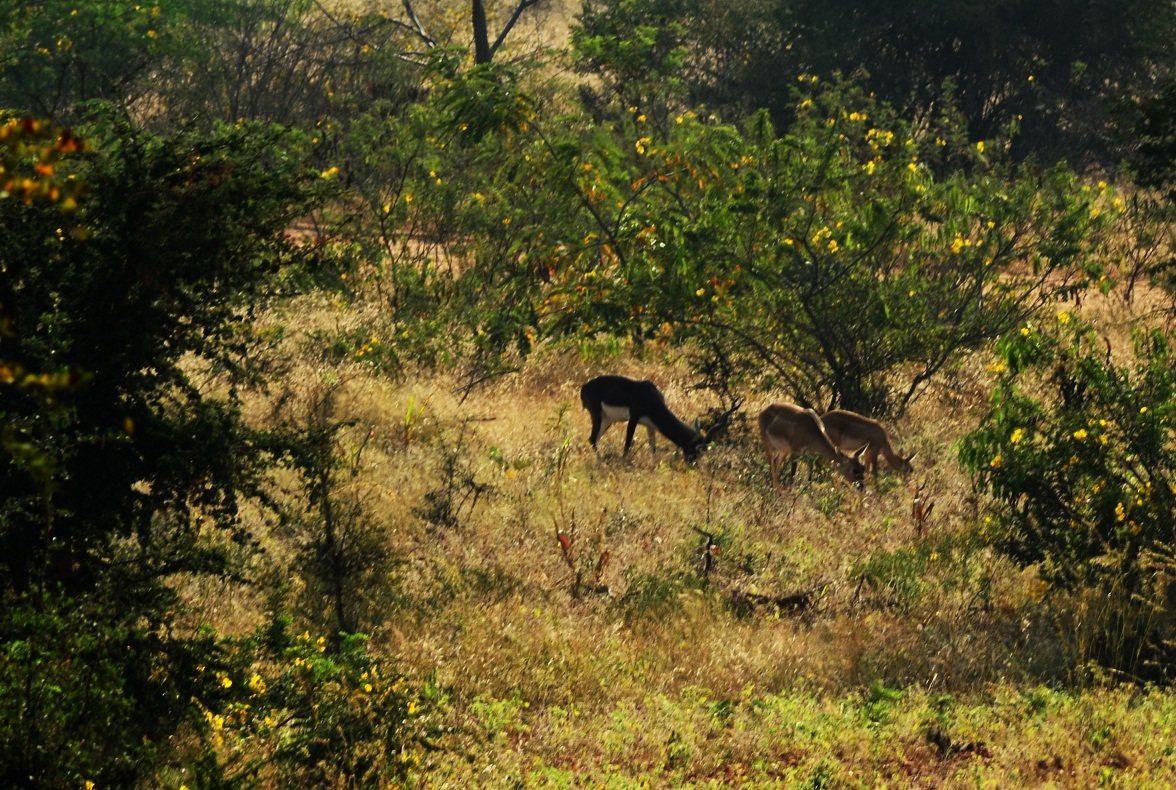 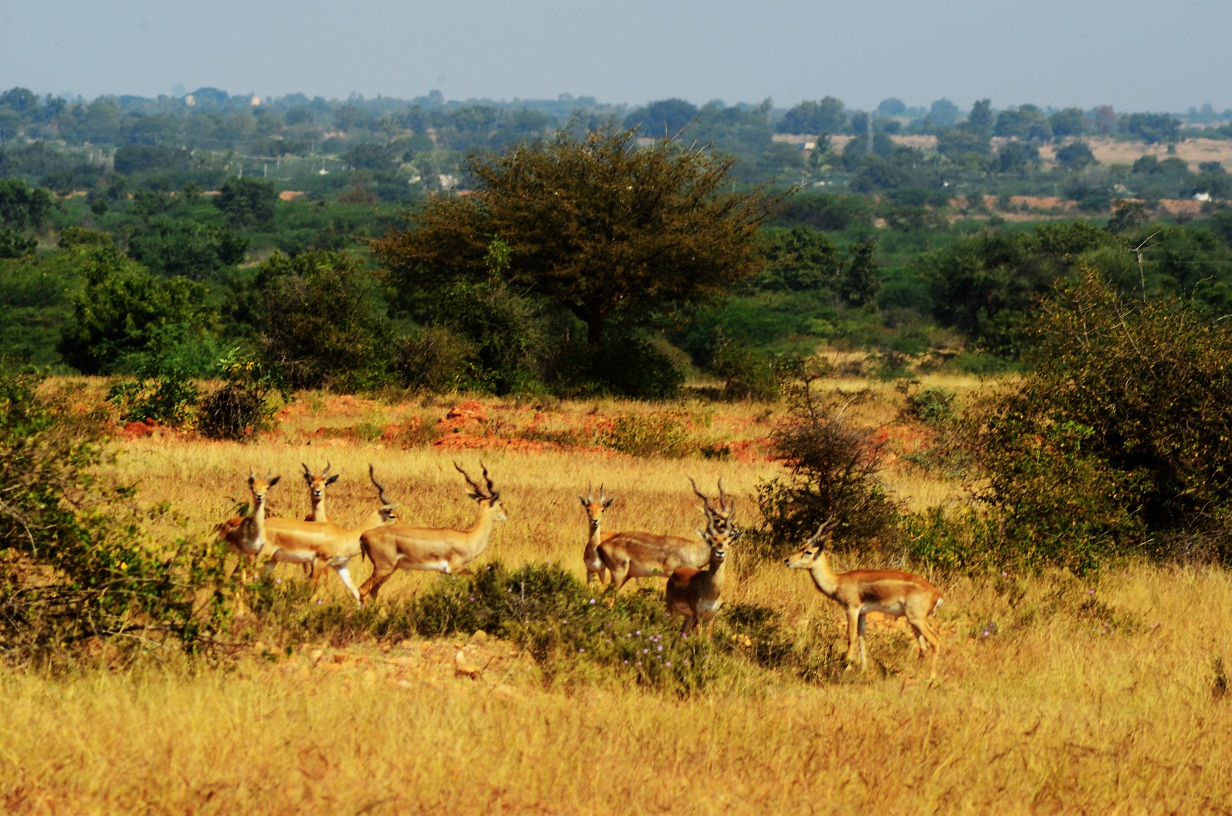 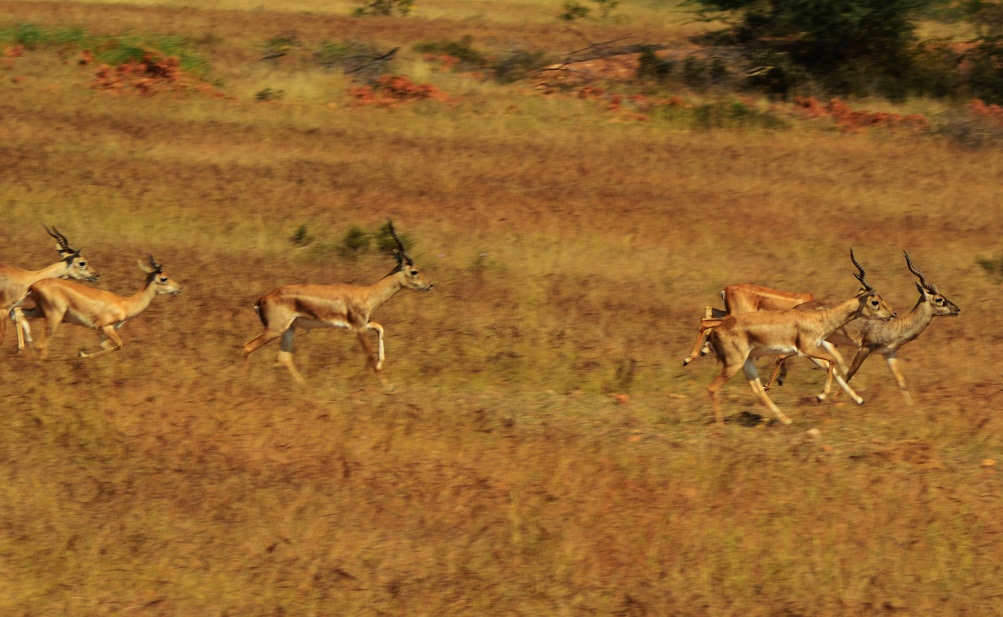 And They Ran Away From Us

We kept on walking on the small trails of path in the jungle to spot more and more of them. The calmness of that place was making it hard for us to decide leaving it. But we eventually did and left for Madhugiri. Reaching there we realized there is not even a single decent place to eat out. We ended up having dosa and idly at a chai shop/restaurant and it did turn out tasty. It gets pretty hot by the noon and all the locals suggest to start the trek by morning 8 something so that you have ample time to spend there and come back. We decided to go ahead and let’s see what this place has to offer. From the base of the fort one can not make out how hard and long the trek can be to the top. There are in fact nine levels of walls to the top of the fort, and after reaching to the 3rd we were already looking towards the way down. 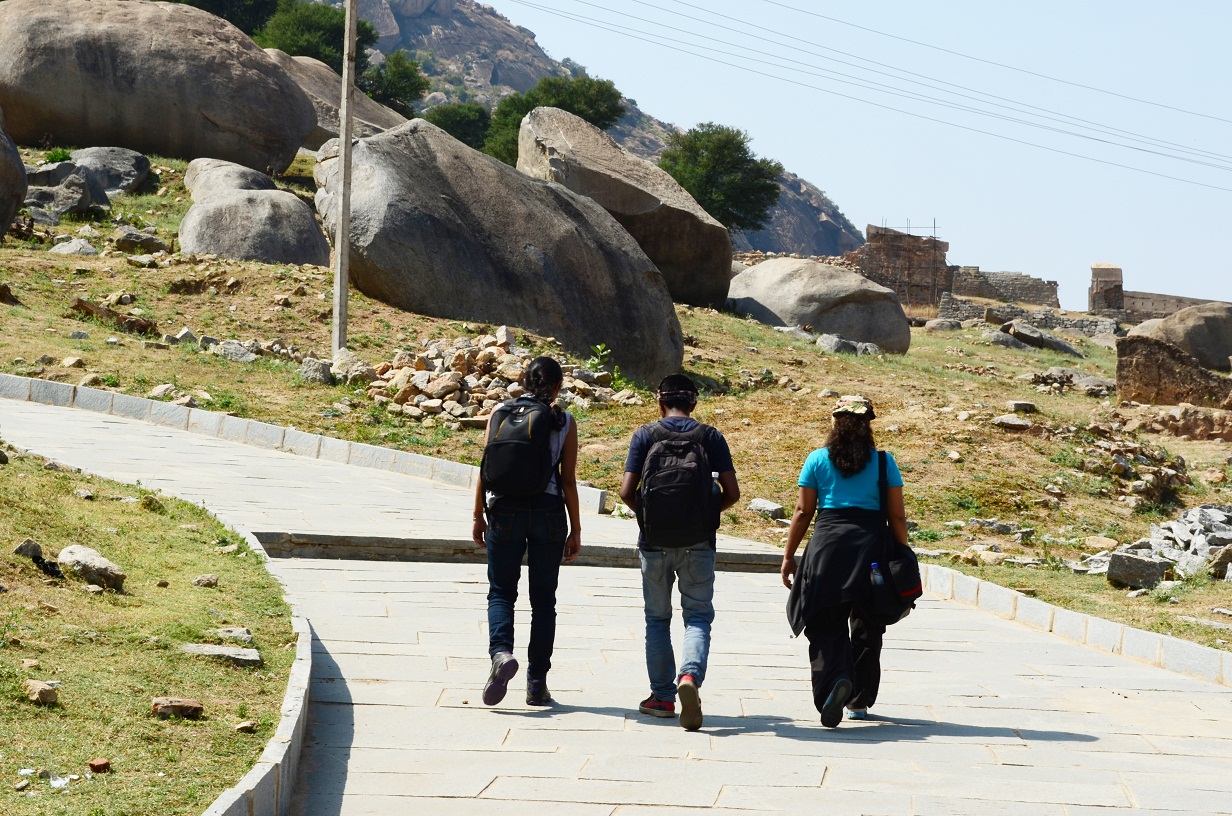 On The Way Up To the Madhugiri Fort

Well, hope is a wonderful thing and is a must grab tool too, be it come from any source, come on any moment, come from anywhere. There He walked down where we sat down with a fickle mind whether to proceed or not. He looked like an ordinary man, carrying a backpack with a 1 litre bottle, head shining like a aura in sun, spects crowning like a jewel on Him, and a determination to climb any fort in vision. And as expected He rides on a THUNDERBIRD. We asked Him how far is it going up from here, and He replied in simple words, “2 hours of continuous walk up and 1 hour of a smiling walk down”. We just kept listening to His stories, He kept on sharing his experiences, and within few minutes of interaction He was a hero. Trekking alone just to make sure He climbs every fort He knows exist. He motivated us to the brim of our taking and we were all set to see what’s there on the top. We were short on water and with every level up we tasted water pretty slowly. There we saw the mighty walls of the fort, standing tall through times and weather, without APEX ULTIMA :p. 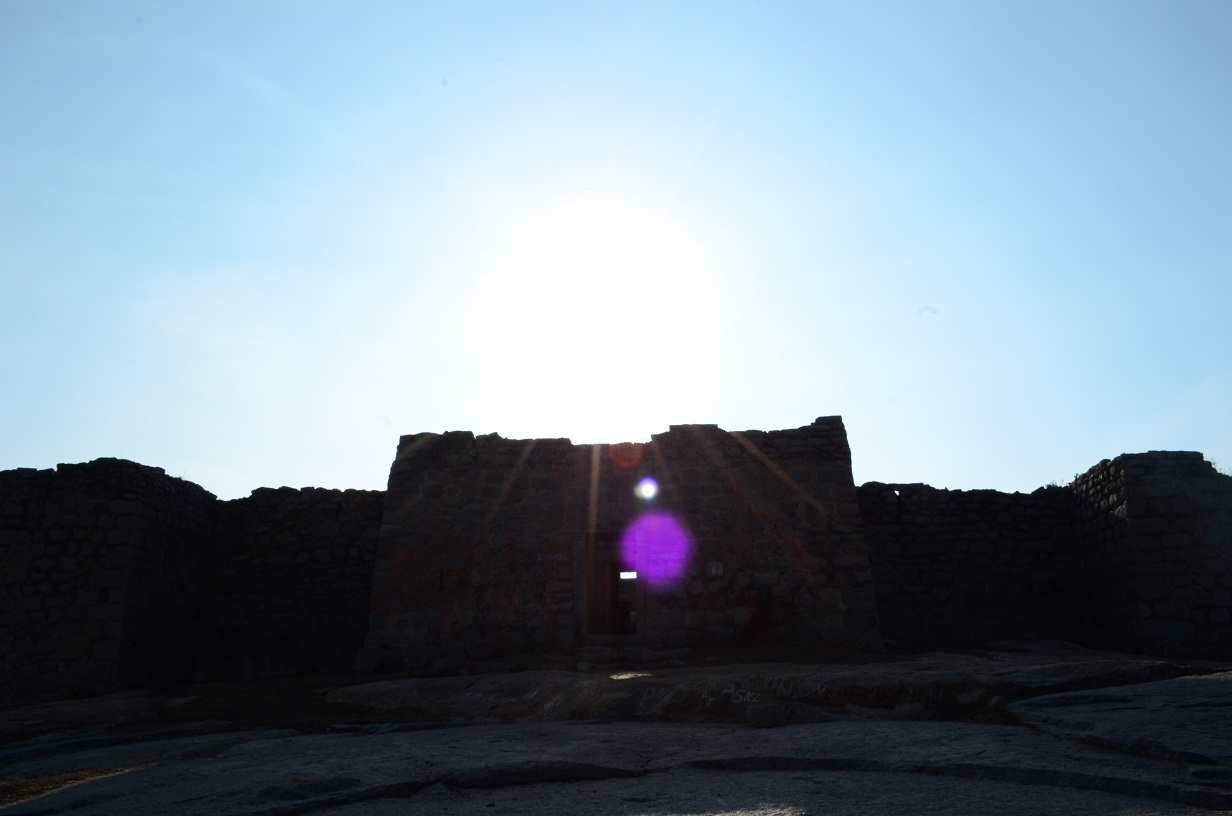 The Fort Wall at the Top 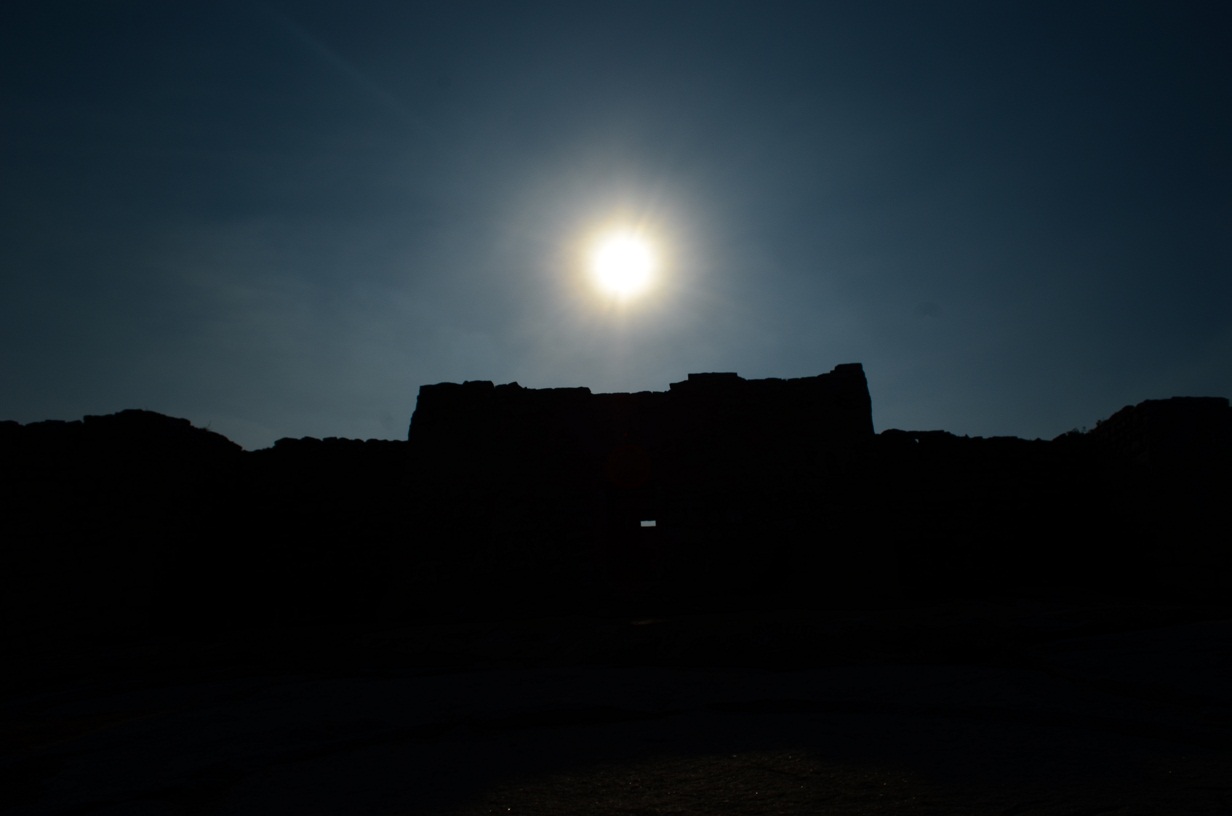 Shades Around the Wall

The view from the top was pretty cool, but the cooler thing was the availability of water there, not sure whether was drinking water or not, but yes we did drink it. Ignoring the crawling creatures on the sides of the tank we went ahead drinking the sweet cold water. Sat there for an hour, shared stories, discovered lot of common interests among us, promised to travel together again and started walking down. 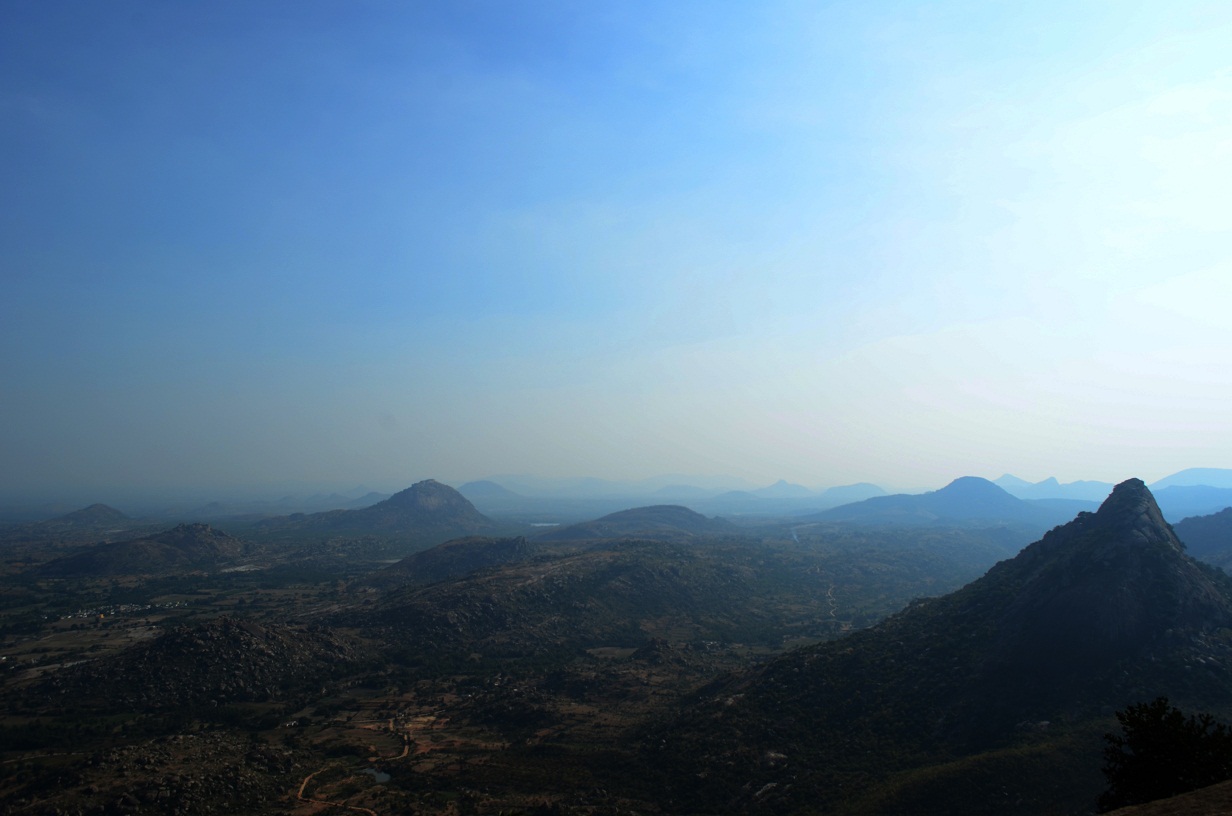 The View From The Top (Madhugiri The highest Monolithic Hill) 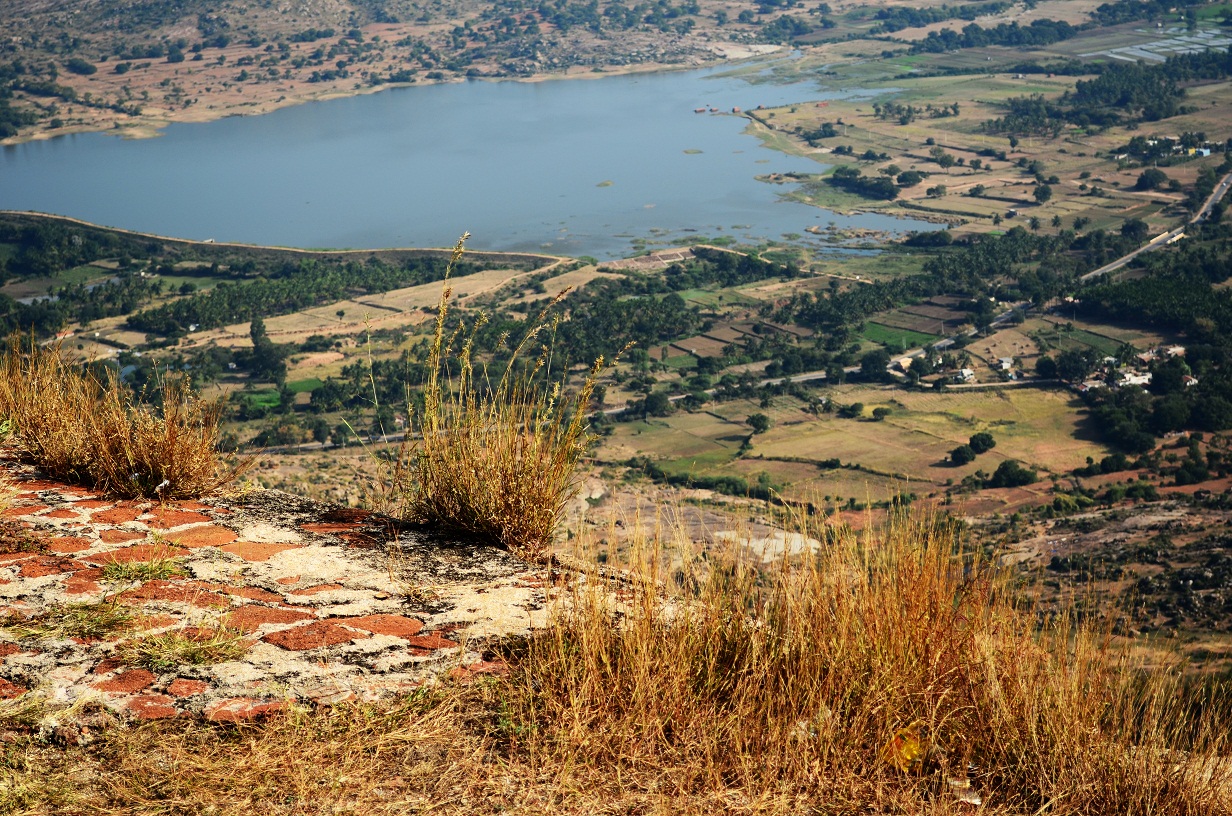 Madhugiri Reservoir From The Top 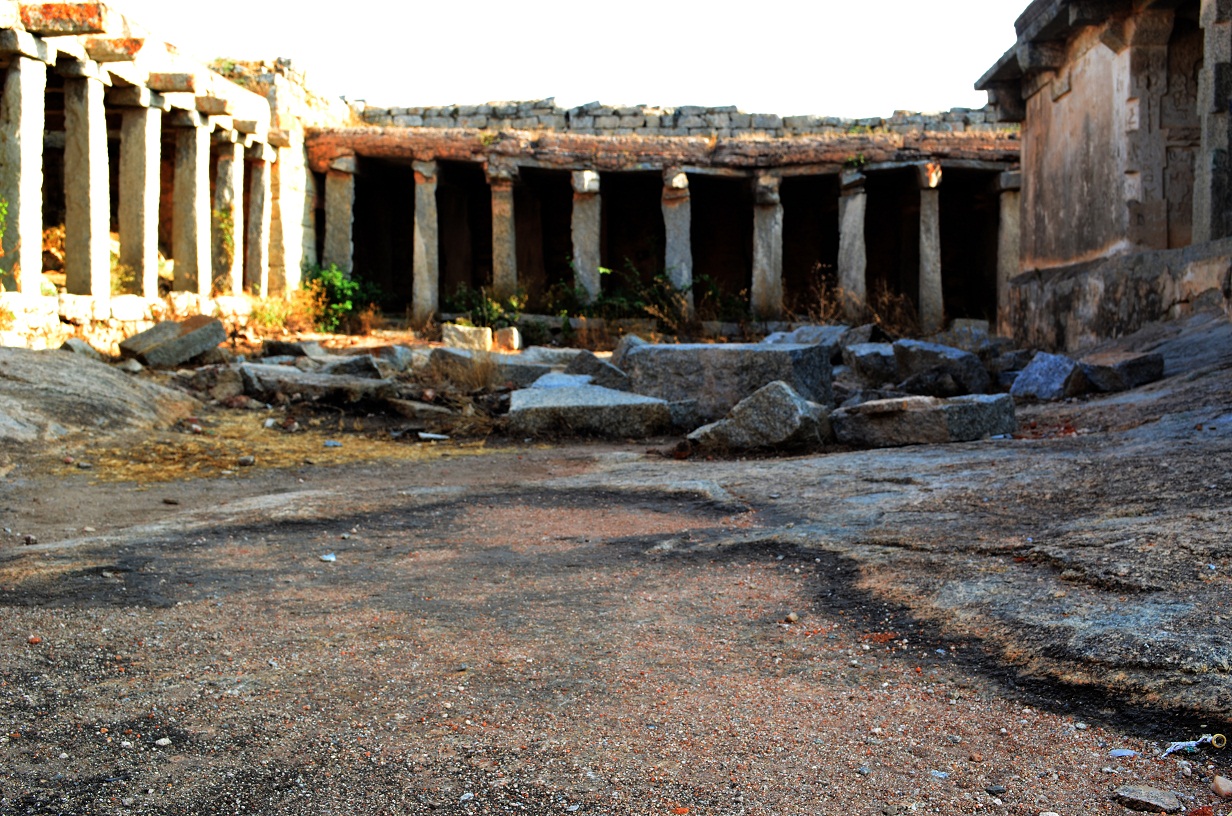 Ruins of The Fort

Ruins of the Fort

We were on our way back as soon as we touched the ground. On way back to bangalore, there were few beautiful lotus ponds and a small lake which was quite a photogenic place, and me and my camera just love such places. 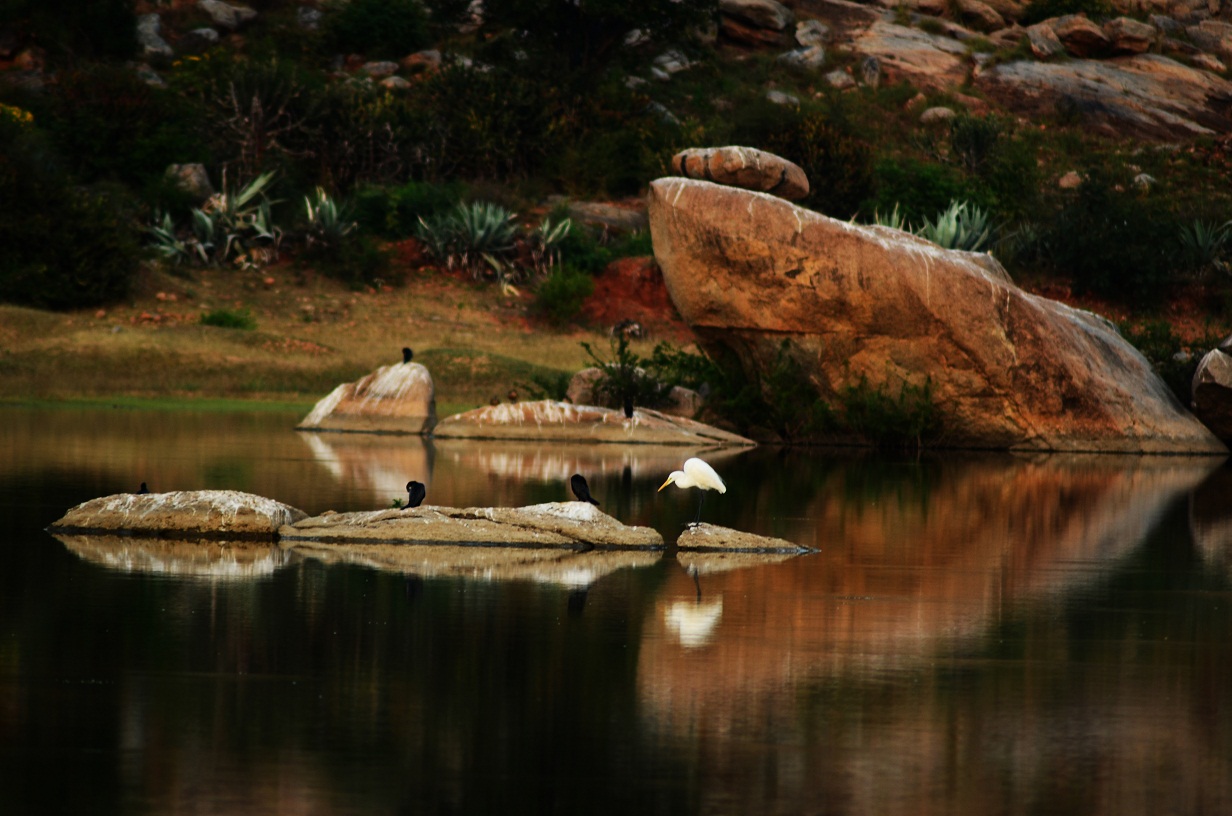 A Beautiful Lake Near Madhugiri

The trip ended with a nice interaction with some fellow travelers, joyous exploration of a scenic place, and some unforgettable memories to cherish forever.