Writing about different experience is favorite of mine. I have shared experience like exploring Chail alone, driving from Delhi all alone and come back, I have shared the experience of travel Delhi-Shimla_delhi, just in 24hrs to experience snow also shared the experience of Kaza the tribal circuit. This time I thought what makes travel experience a different, driving alone, adventure, tough roads, long circuits, exploring no mans land, hectic schedule what else? May be the frequency. We all have time to explore new places, but does any site facinate us so much that it attracts our frequecy of visit? Such place should be calm quiet, scenic, cold, and near. And, I found my summer capital or a place where I dream to build my holiday resort, that is “Narkanda”. Then I thought I should post about Narkanda.

We know that Kashmir is known as heaven on earth, same is Laddakh or Kaza. No one has actually did visit to heaven and we have no definition of heaven, all is imaginary. However, human race define heaven as a place of peace. Adding to the peace is the scerinity, the altitude the mist the cold weather and calmness. If this is the definition of heaven then I would say Narkanda is Heaven’s Base camp. If you move 70 km from Shimla towards Kinnaur, you would reach this place. Scerene, calm and the nearest high altitude point. Narkanda is at the height of 2700m from sea level, 7km from Narkanda is another peak called Hatu peak at the height of 3400m. I have been to Narkanda at least 10times and now well versed with the city’s major and minor attraction and also people and care takers of my favourite hotel of Himachal tourism, Hotel Hatu.

First time when I went to Narkanda with two of my friend it was our discovery. We were trying to find on map a nearest highest desitination and thus Hatu seemed to be the approachable destination. 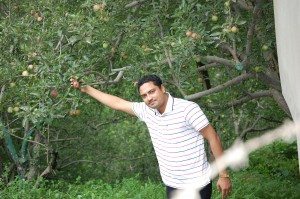 It takes 5hrs drive from chandigarh or 10hrs from Delhi to reach Narkanda. I have seen Narkanda in all seasons and also seen the making of road to Hatu. I still remember the first trip to hatu when the pitch road to Hatu was only for 3km and there after it was road on making. Now the complete 7km road to Hatu from Narkanda is pitched.

Narkanda has a record of 6Feet snow in winters, so when it snows it snows heavy there. So heavy that hatu peak has trace of snow till April mid (ofcourse only in the year when it had snow adequete). 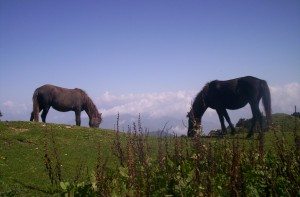 If we talk about attraction there, do not expect mall road (yes liqour shop is there), there is no shop other than the daily need shops. But in attraction list it has, skieng slope (if you go in winter, you can enjoy skieng), 8-9km from narkanda towards hatu but do not climb on hatu peak road, if you move ahead, you will find apple orchid, rejoice fresh apple from apple trees. Hatu peak is itself famous for its mesmerizing view and height, nothing taller than Hatu peak is there on the hatu peak, so you would feel top of the world. Hatu peak has a Kali temple, locals say that this Kali temple is so powerful that once upon a time it dragged an Australian lady in her dreams to here at this place, the lady did visit during full snow. If you have a spare day and move 30 km from Narkands towards Kinnaur, you will drive along with the river satluj at Sainjh. Another wonderful place, the river here is in its full swing. At last, do not forget to spend some time out from the hotel when it is dark, watch the sky and you would realize the population of stars in the universe and you would also realize the pollution in the city life. Stars are so near and so dense there. 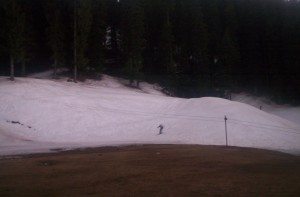 Narkanda snows from January till February, and is lush green and with folower in August-September, June-July is best time to see mist and rain there, again August is best time to rejoice fresh apple from apple orchids.

If you plan to go to Narkanda, just remember two things, in any of my 10 visits to narkanda, streached over various seasons of an year, I have never found a night comfirtable without quilt. So carry wollen even if it is 45 degree in delhi. Two, if you love city life, mall roads and mountain and screnity do not attract you much, if you do not thrive for peace but like to chill then probably Narkanda is not a desitnation for you, rather stop at shimla.

But, personaly I recomend everyone for a weekend to chill at Narkanda.

ghumakkar loves serendipitous moments, when one comes across something remarkable but totally unexpected. I had such an experience a few minutes after landing in Cairo. The drive to the hotel from the airport was rather uninteresting as the architecture was pretty drab, just row after boring row of grey, rectangular concrete blocks . All of a sudden, I saw a building which looked like a Hindu temple…