Thank you for keeping your interest on the East cost trip, here is the story from Day two. In continuation from : https://www.ghumakkar.com/exploring-east-coast-road-trip-southern-states/

Day 2 | 5 March 2016 | Salem – Madurai – Kanyakumari | 496 Km
Hotel Grand Ecsanza, it was a wonderful hotel, worth the money we were so tired but all the energy is back. Got up early to start for the next day, the plan is to visit 5 places in Madurai and continue to Kanyakumari, the morning paper was in front of us, the news of agitation was there with the picture, we could make out our car in the picture. Well we got ready and stepped out for complementary breakfast. The breakfast spread was sumptuous and very nice. This added to our good feedback to the hotel. worth Rs2600/- 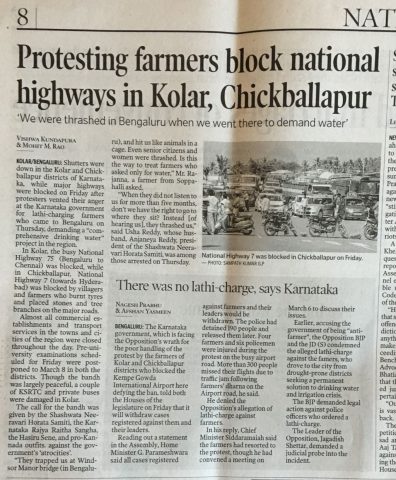 Driving 1072km from Hyderabad we reached Madurai. As per our original plan we were supposed to stay at Madurai and the hotel was already booked. However due to NH7 block and agitation we could not meet that. If we would have stayed there in Madurai at night we could have gone to Madurai temple in morning.

Meenakshi temple one of the example of ancient architecture, temple closes at 12:30pm and we reached Madurai at 12:30pm. Now, we had an option to wait for another hour and then visit the temple or see the temple from outside. It was a sunny day and heat was on top of our head, on top of it, the city at least the portion where the temple is located is pretty clumsy, being an old city and pretty congested.

We thus parked our car in one of the paid parking. To find the paid parking is also bit of a challenge as due to the roads being narrow its all one way so if you miss the cut for parking, you would need to take another round. Well, next in our list was Thousand Pillar Palace. We negotiated with an auto rikshaw to take us to the palace and return back. 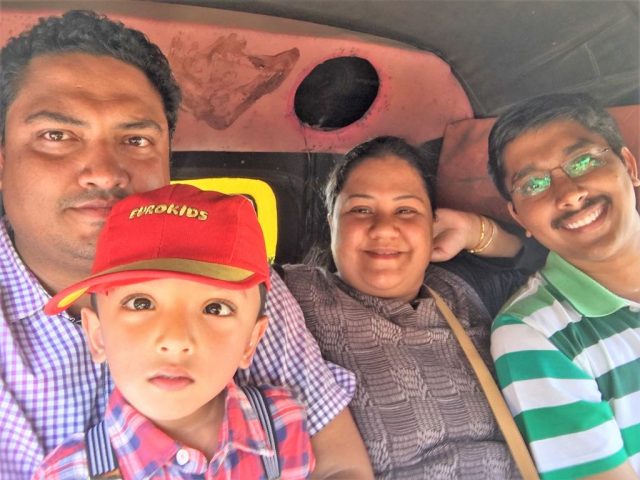 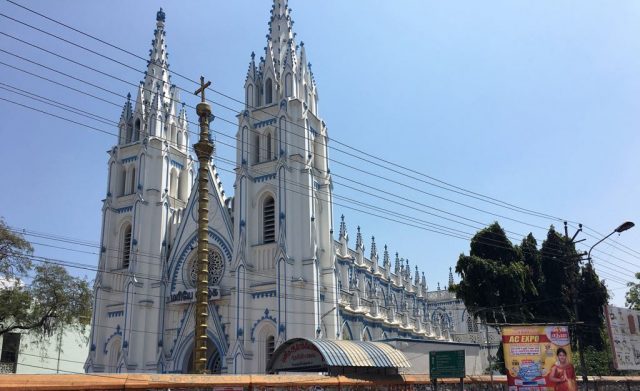 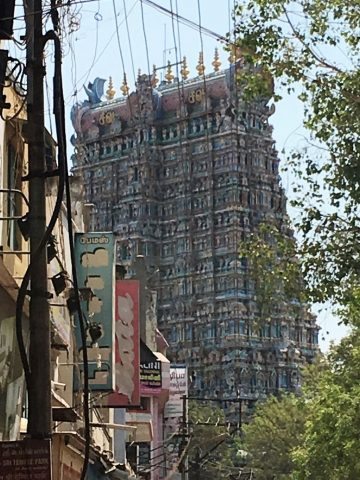 The rikshaw agreed with Rs140, and it turned out to be a city tour in rikshaw. We saw St.mary’s
Cathedral on the way, this church is one of the oldest Roman Catholic churches in India. It attracts lots of tourists owing to its European and Continental style architecture.

We reached Thousand Pillar Palace, the remains of the palace of the 17th century ruler Thirumalai Nayak who contributed extensively to the Meenakshi Temple. The palace was also closed for lunch, but it was about to open at 1:30pm. We decided to wait and negotiated with the auto rikshaw with more money to wait. “Jigar Thanda” the special drink of Madurai, keeping you cool, we found a kisok of sharbats outside the palace so thought to try Jigar Thanda.

It was a good decision, the heat was taking a toll and surely the drink did cool us off. Palace opened at 1:30pm. 10Rs ticket were already in our pocket. We could visualize the song of “Guru(Tere Bina)” and “Bombay(Kehna Hi kya)” shot here, when we entered the palace. 300years back it was a lively darbar of a king!! We spent 20mins inside. This was one half of the palace the second half was demolished in a war. We got back the auto rikshaw to the parking lot near Meenakshi temple, paid the auto rickshaw Rs210. 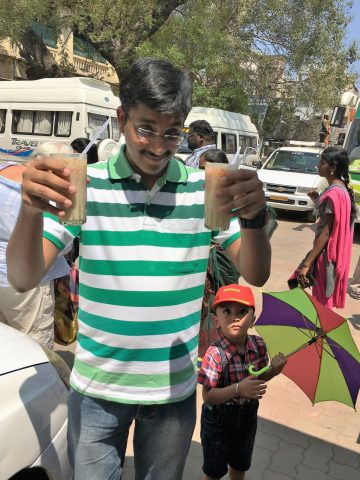 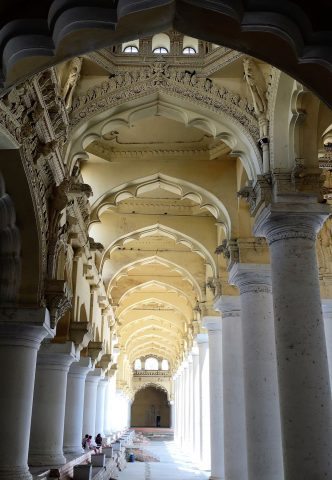 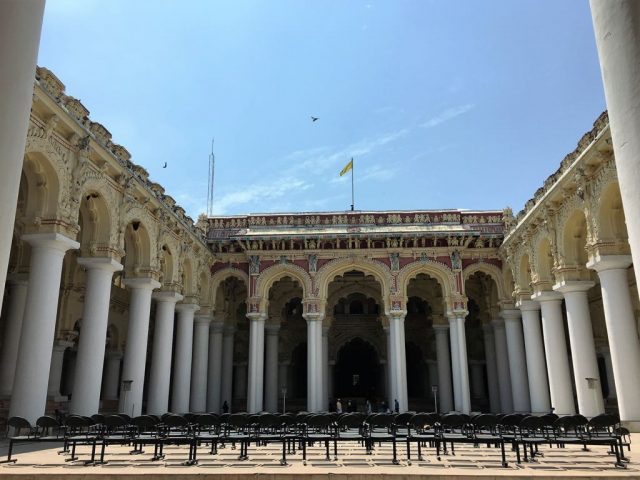 The temple is one of the “108 divya desams“, and is located 12 km north-east of Madurai. The specialty of the temple is the presence of Chakratalwar with 16 hands and each hand holding a different weapon. There is Lord Narasimha behind chakratalwar with shanku chakra. There are 154 alphabets carved in the 6 circles and there are pictures of 48 gods.

Chakratalwar is found in Prathyaaletha posture that implies that the readiness to help devotees at all times. At around 70 odd km there is another place called Idaikuttur famous for another church. Seeing the time we decided to head to kanyakumari and started our car to come out of Madurai. 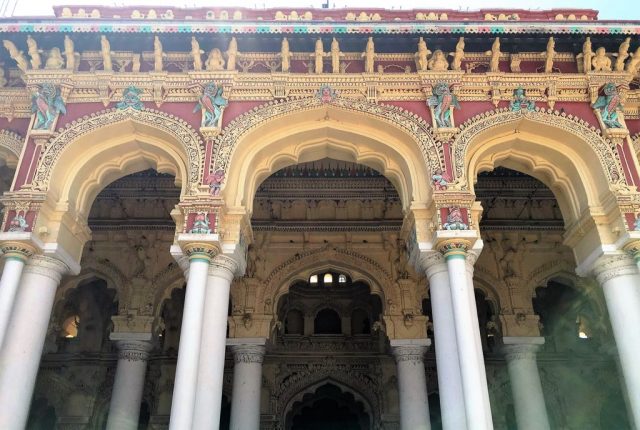 2:30pm 1092km from Hyderabad we paid Rs90 at Kappalu toll for the smooth NH7, continued till 3:30 where we felt that Duggu should have Cerelac and car should get fueled up again.

At around 5pm when we passed “Nanguneri” toll, we saw few windmills, we halted for photography, and the more we traveled the number of windmills became dense and soon we were in a different world, both side lot of windmills, with revolving fan blades, huge, in size, mountains at horizon, with sun beam falling on it as if god is about to come down. Sunset time was approaching, and we do want to watch it at Kanyakumari. 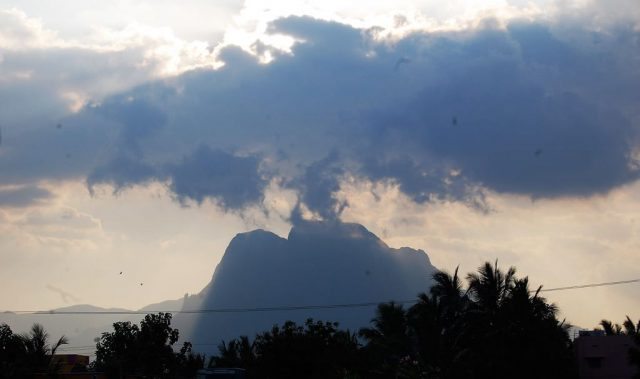 On the way to kanyakumari

1322km, hidden beach, kanyakumari, 6:10am, 10mins away from sunset. The Road ends and it ends with Indian extreme south land zone, and turquoise sea in front about to turn saffron and then black gradually.

The feeling can’t be explained in words, of what we were watching, what we have achieved and what we have experienced so far. We could see at far left the Vivekananda rock memorial, thiruvalluvar statue and huge sea from left to right with little land on our visibility. We spent an hour in the rocky Hidden beach at the sunset point, watching sunset, dipping feet in sea, having bhajji and tea and saying no to the hawkers for dried sea shells, star fish etc.

The iconic father son and sun

We had our hotel already booked, Hotel Gopinivas Grand, though not so Grand, we checked in there, and as usual our enthusiastic Payal, said that we still have time for Kanyakumari temple, it is open till 8pm.

After checkin, we quickly walked down to Kanyakumari temple, gents needs to take off their shirts to get in. But the temple was so ancient, you can’t believe until you enter. The Kumariamman temple is an ancient temple and has been mentioned in the Ramayana, Mahabharata, and the Sangam works Manimekalai and Puranaanooru. After the darshan, spent some time behind the temple, feeling the roar of the sea and watching the thiruvalluvar statue in dark.

The entire tourist spot of Kanyakumari is very walkable, a good mall road, with lots of variety of shells, Kashmiri emporium, and other stuffs. The place is full of various restaurants, Bengali, Panjabi, tamils. We had our dinner in a Bengali restaurant before we went back to hotel to retire for the day. What a day!!! 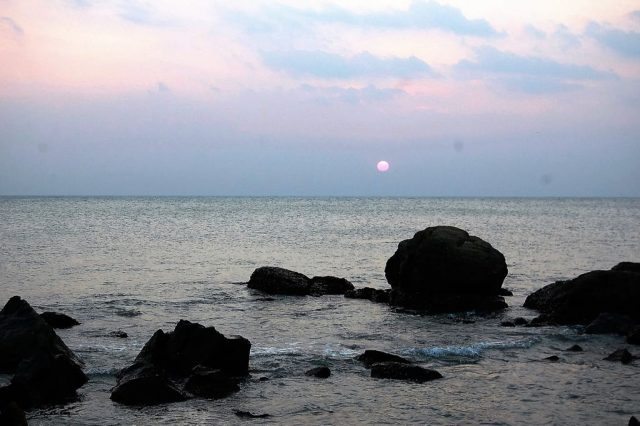 The sunset at hidden beach Kanyakumari