When I was in school I learnt that India vertical distance is 3200km and furthest north is done with exploring Leh and furthest South is Kanyakumari. I always wanted to see these two places and places in between. If you have read my previous blog’s by this time you know me and know my passion of driving and exploring India. After Leh exploration on my Santro (the vehicle I had that time) in 2008, was now able to quench my thirst for Kanyakumari in my i20 after 8 years. A 3480Km drive tour of Hyderabad – Bangalore – Madurai – Kanyakumari – Kovalam (Kerala) – Rameshwaram – Pondicherry – Mahabalipuram – Chennai – Vijaywada – Hyderabad.

This time when in his summer vacation after performing his final year medical, Dr. Veneel Parikh (Sonu), my brother in law, came for a visit to Hyderabad, the dream was to do more than the AP Tour of Nagarjuna and Suryalanka (Refer my previous blog). We were trying to narrow down to Pondicherry, Goa, etc. The plan was to use a week of tour. During the same time, one of my x colleague, Harpal Kalsi, posted about his 3 day tour to Kanyakumari (1250km) from Hyderabad.

I always thought we need 15days for the tour we did. Then seeing the post, my wife Payal, pumped up the adrenaline in me that we can do this tour in 10 days, let us fulfil this dream. Then started the 3 weeks long preparation where I could pitch in only in the last few days due to my busy schedules running in the office. Thanks to Payal and Sonu for 2 weeks long preparation of maps, places to visit, hotels, list of items to be taken along, packing, navigating etc etc. There was a 70 page document created for this tour, detailing the maps, the directions, places to visit etc. There was 80+ places to visit charted.

Payal and Sonu, kept preparing homemade snacks for our tour, the excitement was worth watching. I was thrashed few times for my non-involvement and giving time to office, but truly speaking I was rejoicing the fact that I have now the company of like-minded enthusiasts who took over the preparations I used to do before my trips several years ago.

This stretch of 3480km certainly leaves you with lot of after thoughts, a divine and spiritual uplifting which reminds you again that life is too short, 2000years has just surpassed like a wizzz. Vibes of 9500years still exists. From Cholas to Modi’s, Rama – Jesus and Mohammed, it certainly show you the glimpse of progression of human life, evolution of religion with a single root of helping human to have belief and offer gratitude to what you have.

Give respect to all and receive what you ask for. The trip has shown me the power of human mind and just imagine what Vivekananda could do in his 39 years life what he could do if he would have lived for another 39. Beaches, sunrise-sunset, temple, churches, monuments, mosques. Variety of language, food, people and diversified India. I welcome you all reader to travel along with me through this blog, a day by day.

3rd March, by evening, our car was loaded with the luggage, munchies, soft drinks, water, medicine, safety kit etc. We all were excited to start the next day and had a good night sleep. We started 4 am on 4th March with a mission to view 7 places in Bangalore and move on to Madurai for the night stay. Madurai, 1050Km from Hyderabad, was not very easy for me, my past driving record in a day was close to 700km.

I was ready to accept the challenge. Soon we surpassed Exit 18 from ORR to touch the NH7, which was supposed to be with us for next 1200+ kms until Indian Ocean stops the paving of roads, ends the land and meet the Indian peninsula at Kanyakumari.

We started with devotional songs to pump the divine energy for time till sunrise. We were passing through the sunrise on the buttery smooth NH7 around 6am, both side long fields, no man’s land, ending with lined hills. Sun came out in saffron to guide us throughout the day. We switched to Hindi music, crossing Kurnool and River Bridge. Reyansh (Duggu) my son was now full charged, enjoying musical strips on the road, as we named, the white grade paints to retard vehicle speed through friction.

The distance of the stripes decreases to the road cuts and vehicle make its own music on them. It was 8:30am, we were doing good, surpassed 300km from Hyderabad and thought to take a halt for breakfast. 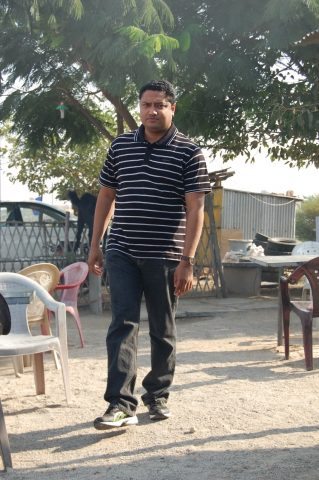 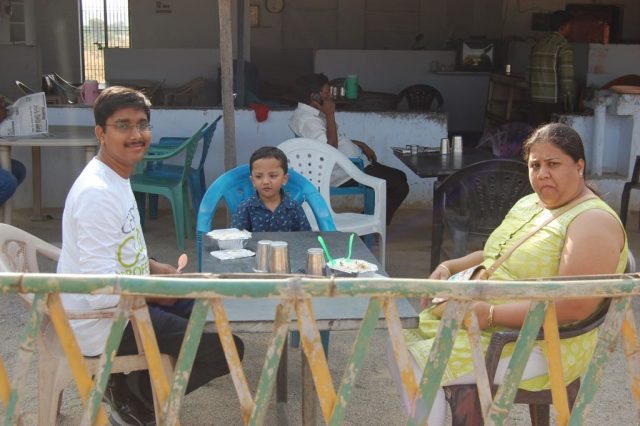 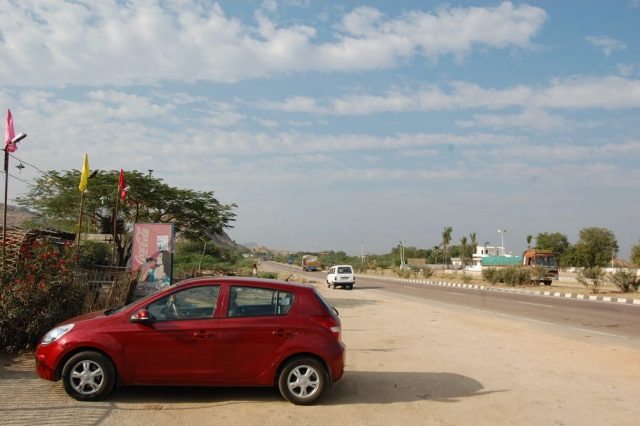 Halt for Bfast – Nh7 towards Bangalore

With a good break of 30 minutes to continue, surpassed Casepally toll gate at 324km, continued through Maroor, then Bagepally toll at 485km at 11:13am. We were happy of our targets, we were not much far from Bangalore, we certainly was to tour Bangalore and very hopeful that we would reach Madurai by night.

Certainty on roads are never a reality, it was just 7minutes that we passed the Bagepally toll, and the buttery NH7 was barricaded, trucks were laying on left and a police asked her to take left from NH7, we said Bangalore, and he explained us in Kannada that Bangalore is left and there is some Car Jam on Highway. We took left, and thought there must be some truck overturn, blockage etc. We asked few villagers for Bangalore, they asked us to go to Chintamadi, then Bangalore. The village was such interior, the GPS was not working.

Sonu got his offline maps on. We continued to follow a Swift in front of us, who was following a local bike. No longer than 25-30km we saw a road jam in that interior village road.

A villager came and asked us to park at left, I told him that I am going to Bangalore, I thought its some red-light jam or some accident or something. I realized that it’s an agitation and highway block as soon as few villagers gathered around our car and one explained in Kannada that, if you know Kannada I will tell you the way else stay here, he said, it does not matter that you are from Hyderabad or Delhi, you have kid or old, you have dying patient, stay here, park left.

In few Kms, the government vehicle disappeared but I was tailing a KA number plate tata Indica. It seemed, he was also trying to search a route to Highway.

In few kms, people were making sign that do not go straight, we stopped to think what to do, suddenly there was an AP vehicle came as our rescuer, there wre 3-4 lads, said that there is a road to highway, follow us, we would not forget BU2100 gray indica ever, who made us to take U turn and turned left into the fields, the rough – no roads, between shurbs….

The petrol was also to a quarter tank, we did not know how long it would continue and only supporting belief was Sonu’s prayer to Jesus, our prayers to Sai, and Sonu’s Offline map which was showing that we are near highway.

No no, never be so certain on roads, 10km, 562km traveling from Hyderabad and we were stopped at a cross road on NH7. Farmer Agitation, on a water scarcity and a laathi charge happened a day before in Bangalore. Few days back the Jat agitation happened in north it was quite violent. Though here were lot of police at Chikballapur, and there was a police HQ, but I was still praying that this should not turn violent.

Hot under sun and lot of vehicles, few were turning back to try their luck on village road. The petrol tank and the experience of village road did not allow me to try it again. We preferred to wait, used the rest room of the adjacent closed hotels, and stayed hydrated on water and juices we were carrying. I took my baby out, and sat under a tree, it was better than inside the car. 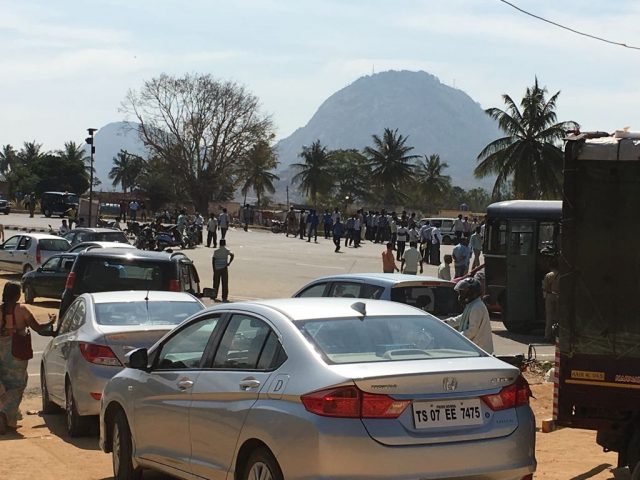 Stranded on nh7 near Chikballapur

Negotiations were on, some were saying it would be like this till 5:30, 4:30… I had a belief that under this sun, even the agitators would not be able to sustain long. It was 2:52pm when we were let go. First thing we did was a tank full at nearest next petrol pump, there were two more spots on Highway with burning tyre and other remains of agitation, we knew that it was not the only spot we got stopped at. We were sure that we need to halt at Salem or Karur before Madurai tonight, but let’s try.

Introspecting with all what happened, we reached ISCKON Bangalore at 4pm our first spot. We spent 1 good hour there to refresh, regain energy and move on. Payal has lot more positive enthu than I ever think, she guided through her GPS and did not let her enthuse down to visit all 7 places we planned for except Tipu Sultan’s summer palace. 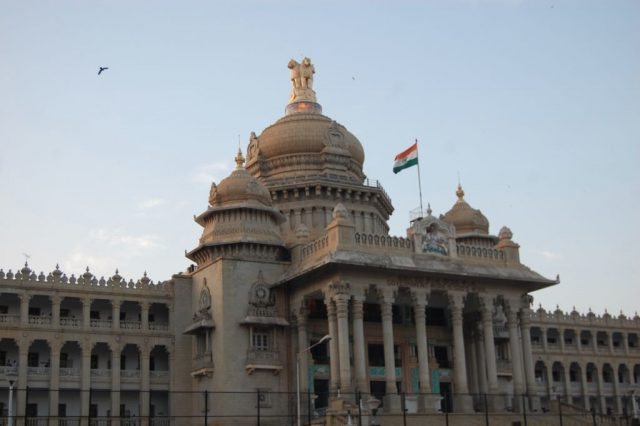 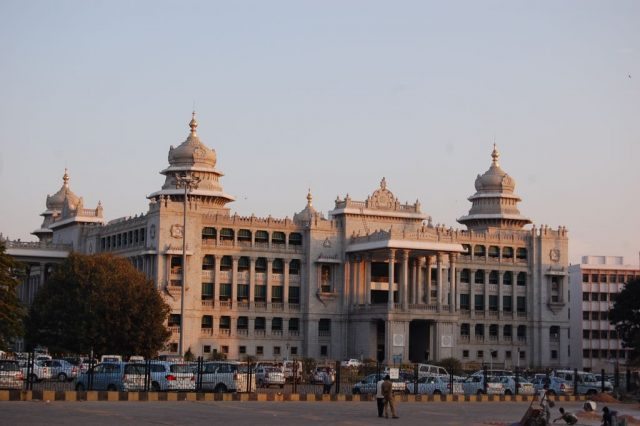 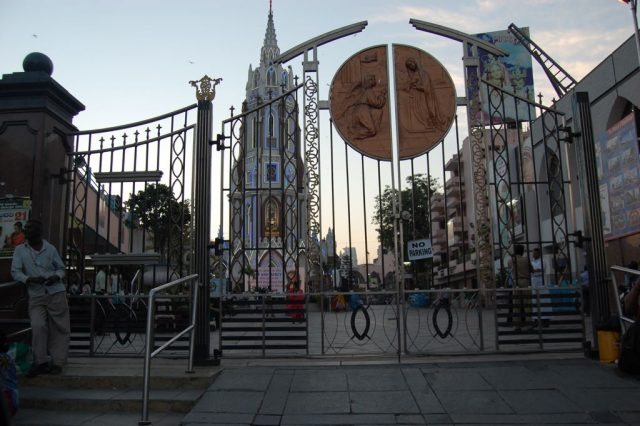 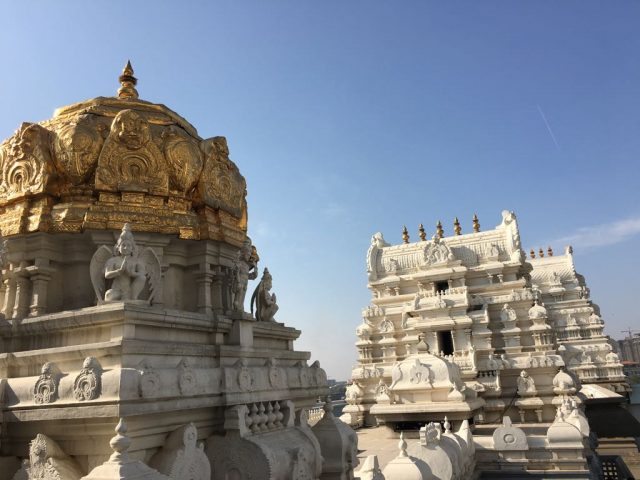 From ISCKON to Bangalore Palace, Vidhan Sodha, St. Mary Basilica, St. Mark’s Cathedral and M Chinnaswamy Stadium, although from outside but we covered them all. I wonder what make Bangalore Palace for person entry 250rs, mobile camera 250rs and still camera 625rs. Well it was 7pm when we were snailing (with snail speed) through Hosur road, electronic city Bangalore.

It got tough to drive then, though buttery NH7 but lot of trucks, and high speed vehicle and windshield glares of opposite traffic, stressing my eyes. I was already off for Salem. I could read the marks about Ghaat roads, I could make out mountain outlines and I was sure that I am missing some part of scenic routes.

We had a three day long weekend coming up in September,2009 and wanted to drive down to someplace close to Delhi in a radius…