It was getting darker by the minute. The road went up and up in loops quickly gaining height so we felt the vehicle ahead of us is almost above our heads. Narrow roads didn’t leave much room for manoeuvring on either side. The gorge to one side was so deep it sends a shiver down the spine of anyone who is not attuned to such heights especially if there’s an oncoming vehicle. There weren’t any, thankfully; no human beings in sight either.

We were on our way to Munsiyari in the state of Uttarakhand. Known for its outstanding natural beauty this place was on my radar for quite some time. I was, in fact, dreaming of Dalhousie-Dharamshala circuit but the long weekend towards the end of June attracted too many parched souls to such cool climes and so were sold out. Munsiyari, introduced by Ghumakkar came in next, its remoteness from national capital helped. Accommodations were arranged, the usual suspects rounded up and we set out on the last weekend of June 2017. There were 8 of us in two vehicles.

We have decided on Tanakpur-Pithoragarh route for the forward journey and Almora route for the return. Though longer the former offers more beautiful views and places frequented by Jim Corbett – Champawat, Lohaghat – which he described in his books. Ever since our trip to Corbett Park a decade back (https://www.ghumakkar.com/in-the-lap-of-nature-jim-corbett-national-park/), I was looking forward to visiting these places.

As it is difficult to reach Munsiyari on the same day from Delhi and to avoid hill-driving at night we took a break at Lohaghat. By then we’ve crossed Tanakpur – Nepal border is just a few kilometres from here –and Champavat leaving the plains behind and have driven over 450 kilometres. River Sharda flows between the hills and the plains of Tanakpur. The climb begins right after you cross this river.

We woke up to a glorious morning at Lohaghat. The hill right in front of our hotel was covered with tall coniferous trees and those who woke up early went out for a trek up the hill. The recent rain washed away all dust and the foliage was looking clean and bright. The sun was just breaking out of the clouds with its golden rays filtering through the pine needles. 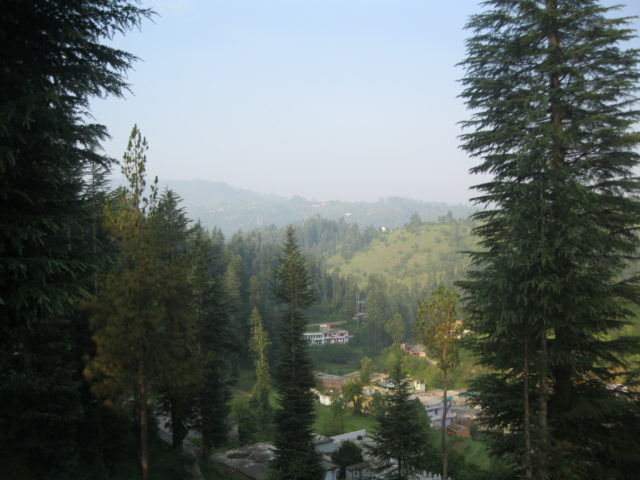 We reached the top which was covered with grass where we sat down to relax. The air was fresh with the smell of wildflowers. Little white/yellow/violet flowers were radiating their exuberance all around. Tiny dew drops covered the tall grass blades which reflected the azure sky. A soft touch and the tiny drop started rolling down collecting all droplets on its path. Someone couldn’t resist the urge to pass a hand all over the grass to feel the purity of nature as it reminded us of our childhood in Kerala. 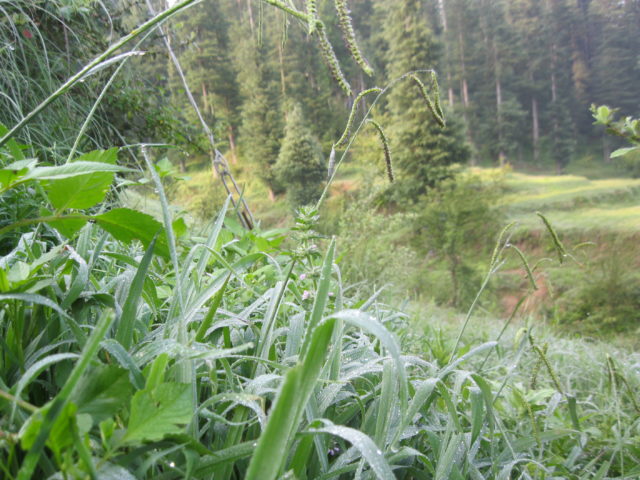 We continued our journey via Pithoragarh and Thal. The serpentine roads took us through thick jungles of pine and cedar trees interspersed with little waterfalls. Every bend offered breathtaking views of the mountains far off and the valley below. The Ramganga river which followed us much of the way reflected the greenery rather than the electric blue skies. Signs of landslides were seen at regular intervals; at one point we could see half of the mountainside split lengthwise washed down into the river below taking the bridge with it on the way. We drove on the temporary one put up by BRO. 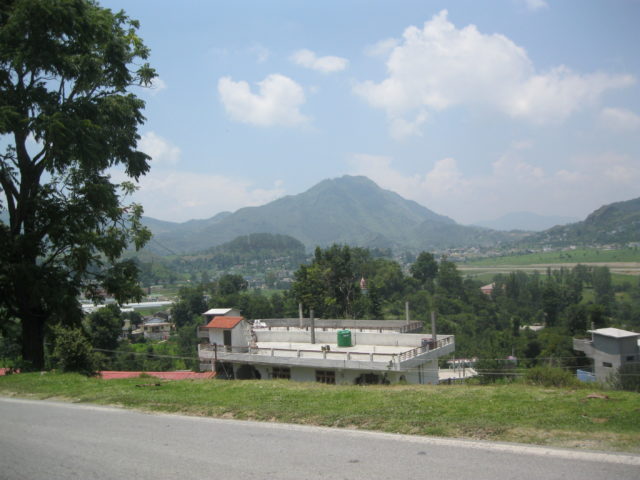 Birthi falls was visible from afar like a silver thread running down the mountainside. Closer it reminded me of the school science exhibition where ‘Aakash Ganga’ was put up – a water tap freely hanging down having a constant flow of water with no visible origins. Birthi falls starts right at the top of that mountain with an invisible connection. 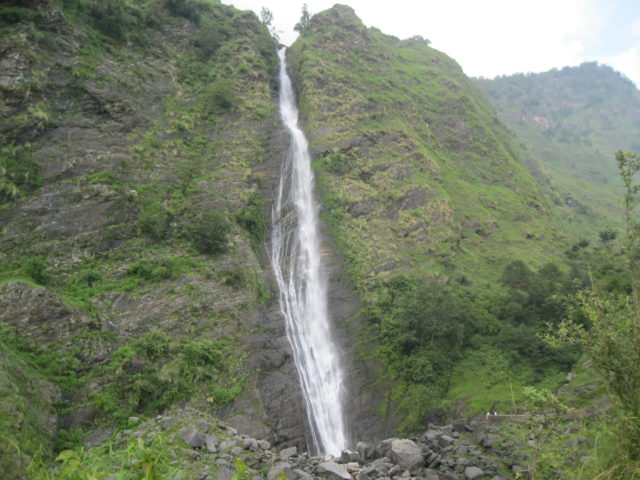 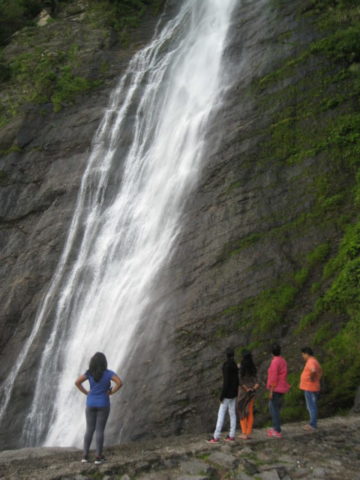 It was steeper ascent closer to Munsiyari. The last 30 km or so gained much height with narrow roads as described initially. The final 10 km was a climb down. Finally, we reached our destination safely after driving over 180 km in the upper reaches of Kumaon. It was already dark when we found our hotel and could hear a brook rushing down somewhere close.

Those who woke up early the next morning were stunned by the scenery unfolding before them. The snow-capped peaks of Panchachuli shone in the golden sunlight. It was so close I felt I could extend my hand and touch them. The show was on for a few minutes only and then it disappeared into thick white clouds. The early-risers then set out for a trek to the mountain-top nearby, a couple of km from the town centre going past ITBP camp.

View from the top was exhilarating and indescribably beautiful. We were perched on the top of a hill overlooking Munsiyari. The town down below with its multi-coloured rooftops seems to have been placed at the bottom of a bowl with high mountains guarding it against all sides and the mighty peaks forming a second layer of protection. To one side was a deep gorge falling hundreds of feet below but with dense vegetation of conifers. Another side exposed the dark blue folds of the hills overlapping one another reaching the horizon. A thick foam of white clouds lay on the blue blanket.The little flat top we were standing was covered with a green carpet of grass where we sat down to enjoy the surroundings.

It was a perfect set-up. The sun was shining brightly. The sky reflected a deep blue that was never seen before. The cool breeze flowing in from the valley was fresh and rejuvenating. Birds that flew overhead were singing without a care in the world. You are surrounded by high mountains and fleecy clouds were floating around. The Creator was showering us with His glory. We lifted our hands up to the heavens and profusely thanked Him for the wonderful opportunity given us to witness such magnificence on earth. 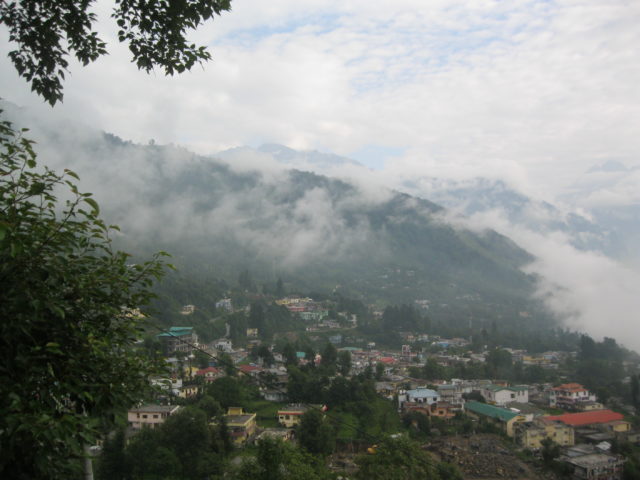 Clouds over the town

Soon dense clouds started rising up from the valley and the whole place was engulfed in it. Visibility was reduced to a few meters. Gone are the peaks and the mountains and the gorge; all you could see was the white haziness. The transformation took just a few minutes and it was magical. We just sat there listening to some soulful music. We didn’t want to go down and had to drag ourselves after a couple of hours. 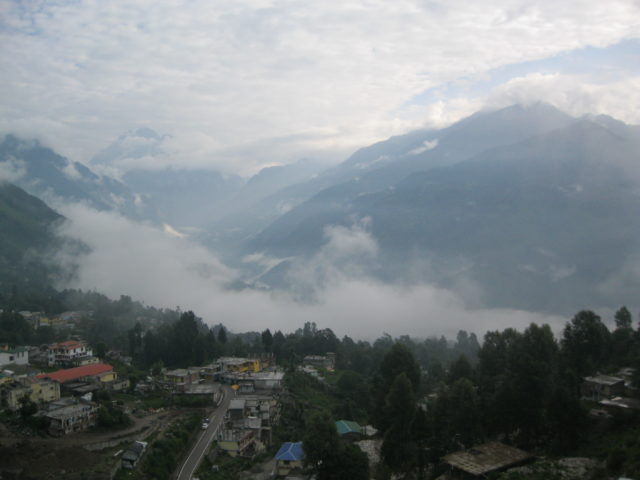 Clouds filling up the folds 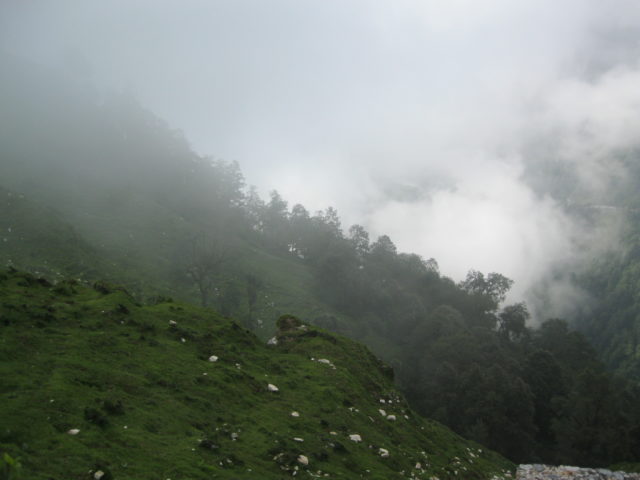 Rest of the gang was gathered and we moved on to Maheshwari Kund, a pond up on another hill. We drove a few kilometres and then a steep trail up the hill leads you to a flat land with a little lake in the middle. You need to sit under a tree and relax to appreciate the beauty and serenity of the place. A couple in the group who had all but forgotten their courtship days were suddenly transported to paradise; they found a rock under a tree by the lakeside and drifted into blissful dreams of a bygone era. The pond, a gurgling brook, butterflies kissing wildflowers, gentle breeze and greenery all around…how can one resist falling in love again? 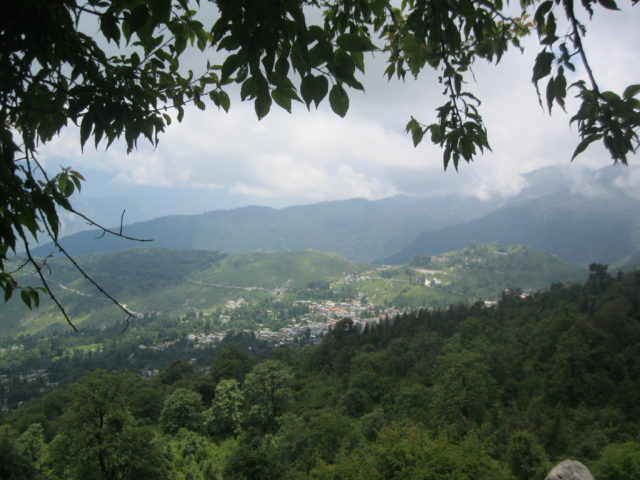 The view from Maheshwari kund 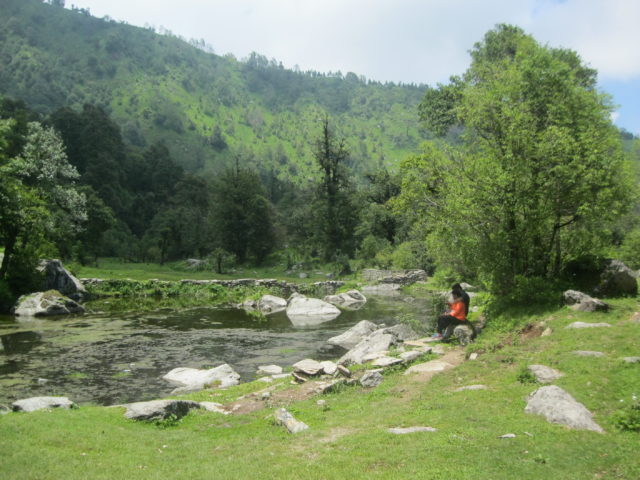 Dr Pangtey’s Tribal Art Museum is a place one should not miss. Drive down a couple of kilometres from the town and you’ll find this museum after a short walk. You can learn a thing or two about life in the hills.

We visited a few more spots often braving steep climbs but were rewarded each time with astounding views. Kalamuni top, Nandadevi temple etc. offers nature’s beauty on a platter. This place is no less than Swiss Alps or Welsh mountains, I told myself as the following morning also gave us the incredible view of the peaks where even a glacier was visible. 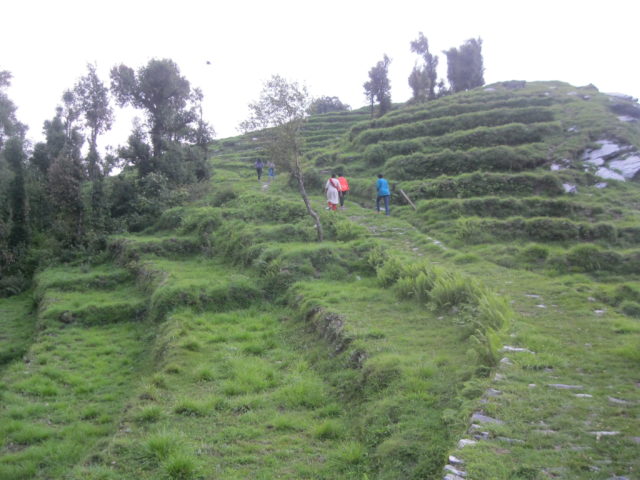 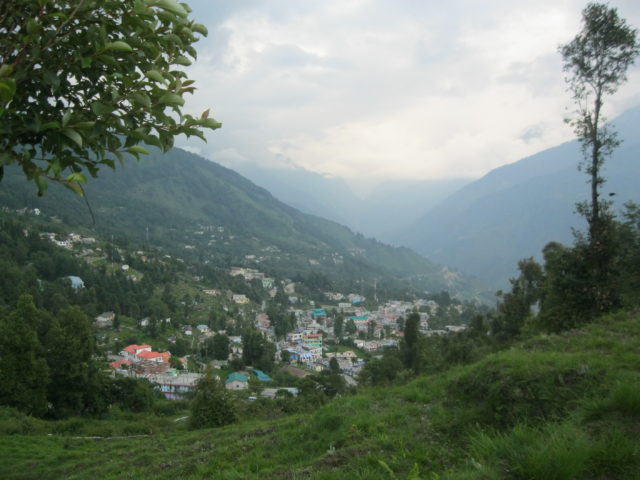 Having enjoyed so much goodness of nature it is difficult not to mention how poorly we reward her. The town square was flowing with litter. There was a heap of rubbish right in the middle of the bus station and no litter bins anywhere in sight. Look like a place with no governmental supervision. It pains to find wrappers and plastic bottles thrown away at every scenic spot. Can’t we be a little more caring? While on the way the previous evening close to the town we found herd of bovines spending the night at two hairpin bends that refused to give way to us lesser mortals. Doesn’t the owner have a shelter for them as they have in some parts of the country? Is the concept of cattle-shed so alien to them? Where are they kept in winters?

We began the return journey that morning via Almora. It took us 14 hours just to climb down and reach the plains at Haldwani; 6 more hours on the highway and were home safe in the early hours.

Munsiyari – A bowlful of beauty was last modified: February 5th, 2018 by Patrick Jones