Mausa & Mausi were at home today, Mausa had planned to take my dad for an eye check-up. My dad was quite interested in glasses & eye-checkups these days as he had been prescribed reading glasses lately. Mausi had promised me & my mom some shopping too. So the basic agenda was to eat breakfast & leave our ways & then the most important part, be home by 7pm to watch England’s first match against the USA☺ I predicted an easy 3 or 4-0 victory for England but we all know what happened (if you don’t I will come back to that). After the match I was green with rage.

Anyways, I broke my oath again (as I was going to lots of times in this trip) by eating Dhoklas for breakfast. After breakfast, we bathed & went our different ways – me, mom & mausi to the 99p store & my dad & mausa to his clinic (he’s an eye specialist).
First we went to the 99p store, I shopped like there was no tomorrow, but my mom assured me that there is, & in fact we are here just to shop for our trip to the Isle of Wight tomorrow ☺ & we would come once again for our final take-home shopping, & then I could shop like there is no tomorrow☺. We then went to some shoe store for my mom; we used up (wasted) time there & ended up buying nothing :P. From there we went to a clothes shop & I went crazy there ☺. Today was the first of England’s first World Cup matches & so the store was full of merchandise related to English national football. There was red & white face paint, clappers, scarves, mobile socks, etc. There were also shirts that had slogans about the English national football team, shirts that depicted a cartoon version of Bobby Moore lifting the 1966 World Cup, & also lots of shirts that had just 1966 written on them zillions of times in red, blue & white! I thought that was silly. We don’t go around wearing T-shirts with just 1983 written in orange, white & green every time the cricket world cup comes around! (Or do we?). I bought myself an English phone sock (case) & a blue shirt with the three lions on the left side of the chest (when I wore it, I could confidently say that I have got a lion heart). I also bought a lot of ‘I Love England’ socks (for my feet, not my mobile), but to my disappointment they were too big for my feet. 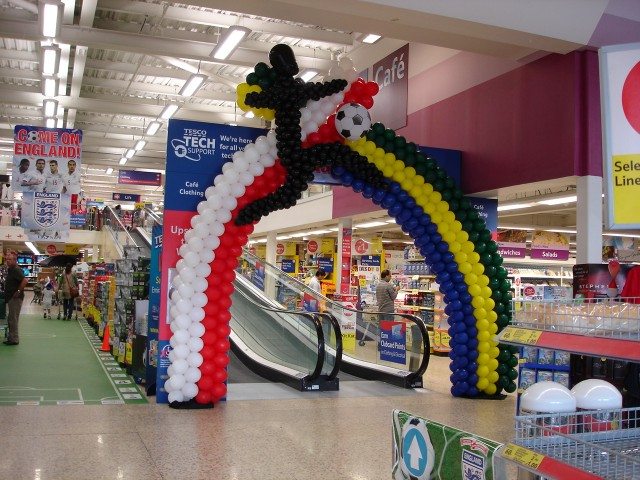 There was a loooooong line at the counter & by the time we finished getting our stuff billed, we were really hungry. So we walked to the nearest McDonald’s, which was not as close as it looked from our car. We finally got there after a “five minute walk” (I’ll get to that by day 5). We ordered our food & it seemed like ages till it finally got done & reached our table :P
We ate our meal & left for Sainsbury’s to do the basic shopping for the house like milk & all. While my mom & Mausi were shopping, it struck me that there was an Argentina Vs Nigeria match going on! I asked everyone in sight the score but none of the people had any idea. I started trying to rush my mom up but she was taking her own sweet time. We took 4 bags full of stuff home.

By the time we reached home, the match was over and I never got to see it (sniff). We unloaded all our stuff & by that time we did that Mausa ji also reached back. When we asked him where my dad was, he said that dad had left his clinic an hour before him. Mausi got concerned and was a little upset with Mausa ji as to how he could have left my dad, who was just a day old in London, to find his way back on his own. My mom got worried & called him to ask him where he was. He answered that he had just reached Hornchurch tube station. There was a detour coz a station or two were closed (getting renovated for the 2012 Olympics in London), so he had to take a bus to the next functioning station. The only plus-point was that he crossed Arsenal’s & Tottenham Hotspur’s tube stations!! I was quite thrilled to hear that☺.
Anyways we started preparing ourselves for the England Vs USA match. I could hear the people getting in their cars & pressing the horn three times for the 3 Lions of England (actually, I think some of the people doing that just liked to honk, they didn’t give 3 hoots about the match!). Mausaji went to sleep as he had to drive till late in the night to take us to Portsmouth. The rest of us gathered in the living room for the match.
We stared teaching Mausi & my mom about football. While I had my head turned towards my mom trying to explain what an off-side is, Gerard crept in the box & BAM!!!!! England were a goal ahead☺☺ courtesy Gerard’s strike right into the bottom corner!! I screamed, hugged everyone & screamed again. I basically went crazy! (just for the record, the reason that I missed the opportunity to see the whole move was coz I was teaching my mom about off-side, which she still hasn’t learnt yet :P).

So here we were, sitting happily, content with England’s performance until that fateful minute, when Clint Dempsey hit a not-so-hard strike about directly into Robert Green’s hands, but the ball hit his upper arm & slowly rolled across the line. Robert did try to hold the ball in a second jab-like attempt, but he was very unsuccessful. My dad screamed & cursed Robert Green while I just coolly said “He has the word Green written on the back of his shirt, what you expect?” (well, it happened the other way round, I was shrieking & screaming on R Green, but it is my article, rite?? ☺). At half time the score was 1-1. I saw about 30 minutes of the second half, but then Mausaji woke up & told us to get ready for our road trip to Portsmouth, so I changed into comfy clothes & wore my shoes & socks while my dad watched the full game. He told me that Emile Hesky got a good chance, but as usual, missed it & the score ended 1-1. I knew that everyone was going to blame R Green, but the strikers had about 50 minutes to score the winning goal, so all in all it was a team loss. 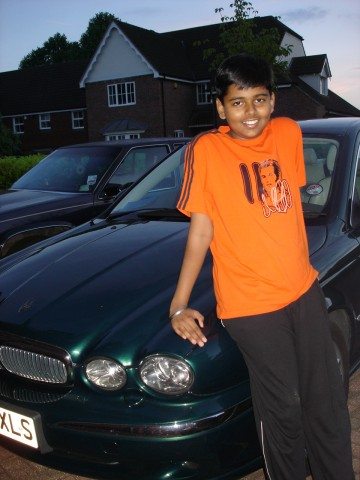 We then left for Portsmouth,it was a long drive and I slept for most of the way, but woke up when we were reaching Portsmouth. I could see boards which had arrows & read Portsmouth FC & Fratton Park, so I got quite excited that we were moving in the direction that the arrows were showing. I saw the Portsmouth FC Mega store & I think I caught a glimpse of Fratton Park.
All my memories of our last trip came back – how we would sit on the pebble beach the whole day & how my mom used to make me walk till Clarence Pier :P.
Mausaji drove us around & showed us Portsmouth by night, with the lights & all. There was the Spinnaker Tower (a close replica of a tower which is in Dubai)☺. Last time we wanted to have dinner there but couldn’t cause it was closed.

We finally reached the Portsmouth house and more memories came back. Renu ji showed us our rooms; I got the one in the attic!!! And to add to that there was a window, but a tree blocked most of the view. Couple of pics from my previous visit of this place. 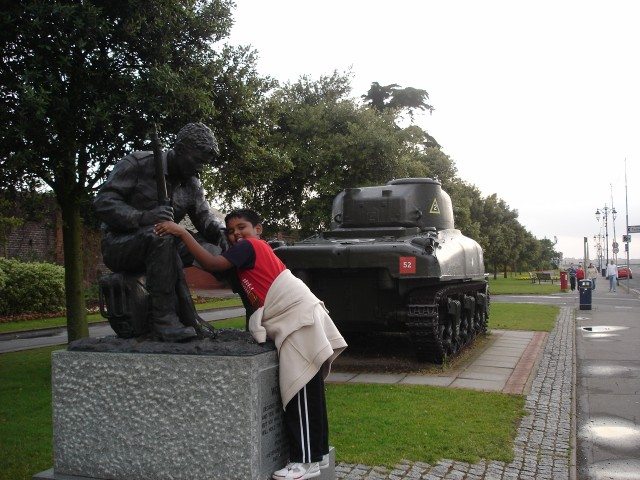 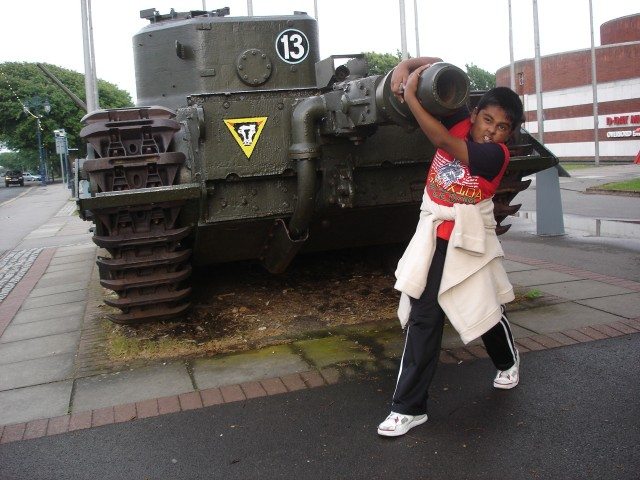 My mom & I unloaded our stuff from the car & brought them to our respective rooms. And after a loooong day I went to sleep.

Shopping as if there is no tomorrow (Hornchurch) – Day 3 was last modified: March 18th, 2020 by Shubham

The first memories of Hogenekkal goes back in time , about 25 years back , when we use to stay in Salem. Needless to say,…