An outing at the end of the year has its perils – over-crowding, cold, fog to name a few. However a long drive is overdue and so was in search of the right location. One tends to look southward rather than the frosty hills in the middle of winter and so decided to drive down to the heart of the country. Ghumakkars mentioned Orchha so drew an itinerary adding Khajuraho and Charkhari – where we have a place to stay – to it.
Been to Agra by road many times but driving further down was a first for me. Chambal ravines, infamous MP roads and scary experiences at odd hours added to the excitement and we set out one not-so-foggy morning during the twilight days of 2016; added thrill in the form of a brand-new XUV AT acquired by my friend wherein the two families fit in. However, a cargo carrier had to be fitted atop as the vehicle leaves no room for baggage inside when fully occupied. 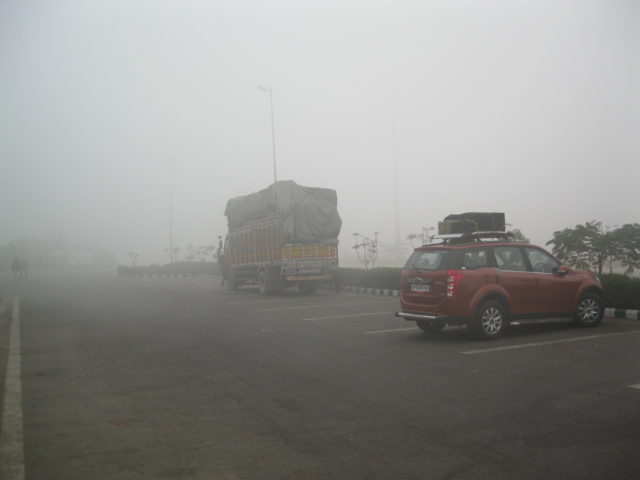 Shape of things to come; near toll gate, YEW

Started around half-past-six and promptly got on to the Yamuna Expressway. Fog wasn’t dense enough to hamper the progress. The sun appeared as a golden ball for a few minutes but then quickly retreated respecting the season. Extension work has been done to this highway at Agra so no need to take the NH2-Agra bypass route. Most of the city passed in a breeze and we reached the Gwalior highway without much hassle. Passed Dholpur and then came across river Chambal. Stopped on the bridge for a better view of the ruggedness of the terrain. 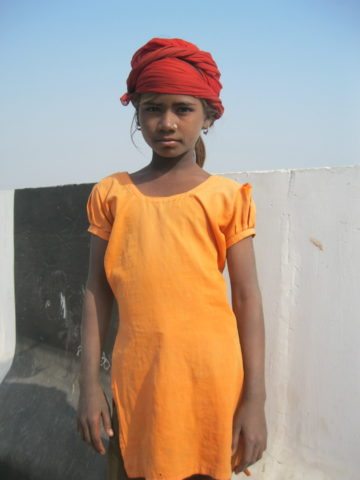 Girl on the bridge; don’t miss the head-gear!

Reached Gwalior soon after. Road till then was of good surface with divided four lanes. Unsure of what lies ahead we pressed on towards Jhansi and found the highway to be good though not like the previous one. No dividers or straightened bends but good, motorable road; top layer of tar may have washed off at some places but found no craters. Must say things have improved in MP. Had a glimpse of Datia palace on the way. No stopover was planned at Jhansi either so marched on to Orchha which is off the Jhansi-Khajuraho highway. We reached our destination about half-past-four in the afternoon covering 450 km approx. in 10 hours.

Orchha is nothing more than a sleepy village with narrow but cleaner roads. After freshening up we wandered off to the riverside. There were boulders by the bank and in the middle of the river as well.

We stood on one of the rocks strewn on the banks and watched the magic unfolding before us – rays of the fading sun filtering through the silhouetted canopies pouring liquid gold into the river, forest reaching down to the other side, river Betwa gurgling and caressing the rocks in the path downstream… Kings and Queens of yore must’ve drenched in this lovely atmosphere looking down from their palace terraces up above.
Darkness soon set in and we went back looking for the entrance to the fort for the light & sound show.

In the morning we went back to the riverside. A low bridge without parapet connects to the other side where you enter into a forest. We walked on it. It was so narrow that you have to be careful not to fall into the rushing waters when a big vehicle tries to pass. It gets submerged during monsoons.

We reached the other side and were welcomed by the primates at the entrance of the sanctuary. Looking back at the canopies, temples and mahals lined up the other bank one couldn’t help thinking about its resplendent past when horses and caparisoned elephants have trodden those dusty paths carrying Royals in their embellished fineries. Built around the middle of the last millennium those magnificent pieces of art withstood the onslaught of modernism. We spent the day admiring the late Mughal-Rajput architecture, the beautiful river and the general sights and sounds. 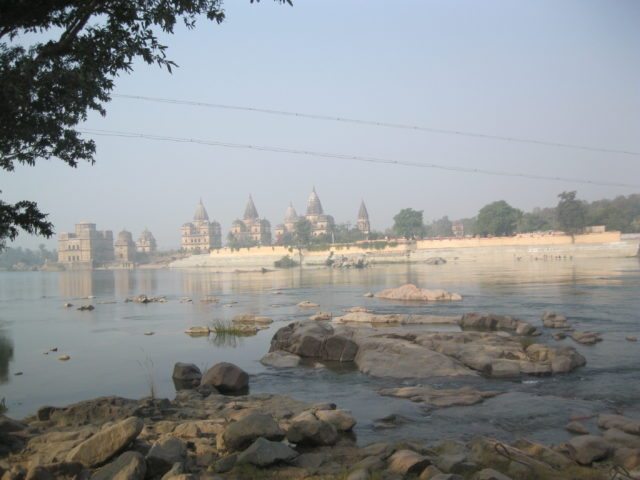 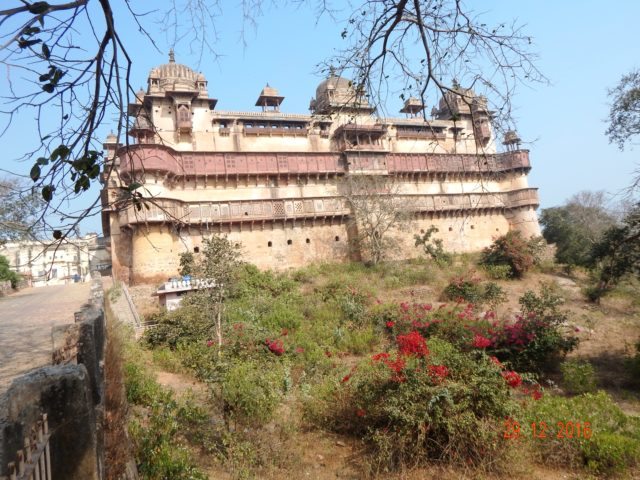 Jahangir Mahal from the outside Photo courtesy – M M Philip

View from Jahangir Mahal – 3 temples in the background

This place still retains its quaint charm owing to fewer footfalls. Tourists generally give it a miss preferring the much famed Khajuraho temples just a couple of hours away. MP tourism is making some efforts to promote tourism at Orchha but a lot needs to be done. The place is blessed with natural beauty in the form of a river and greenery along with interesting historical spots in a rustic set up in the heart of India. There is immense potential to develop this as a major attraction if proper maintenance/cleanliness is undertaken. Riverside walks, forest trails, rafting (already there with hardly any users) and other water sports are some of the leisure activities that one can think of.
We then moved on to Charkhari which is 150-odd km away. Miles and miles of farmlands on both sides of the road with not much traffic except at towns en route. Vast countryside with undulating greenery and sparse population – truly the heart of my country.

Roads are generally good and we enjoyed the leisurely drive to our destination. There are a few man-made lakes around this place which probably earned it this epithet. 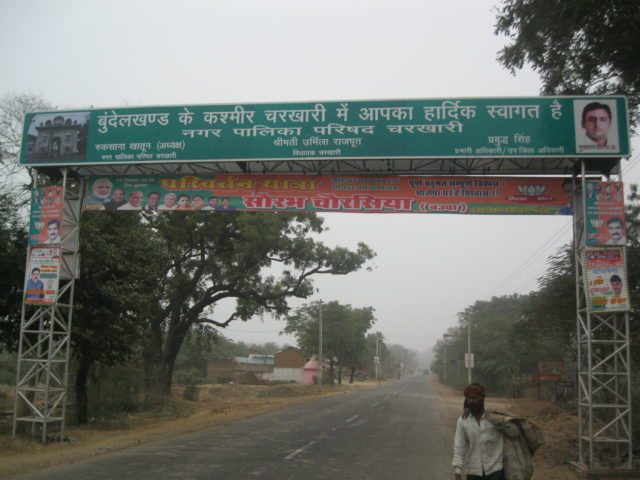 We stayed with a friend there in real rural settings enjoying farm-fresh fruits and vegetables.
Khajuraho is 80 km away from Charkhari and we made the trip the following day.

Stunned by the beauty unfolding before us we wandered around the temples craning our neck unable to absorb all that is in the spread – amazing architecture, heights of craftsmanship. 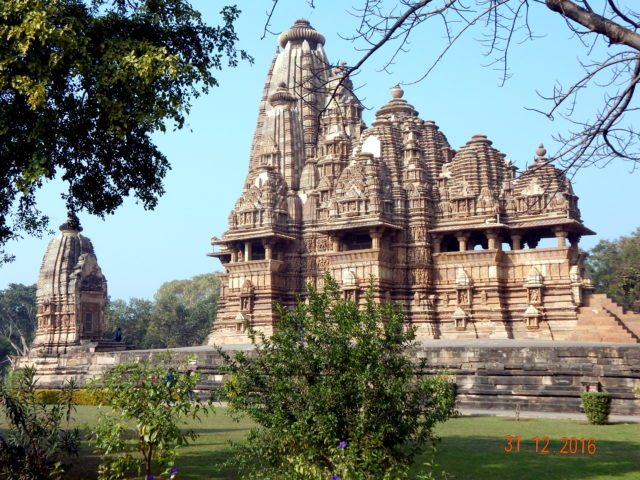 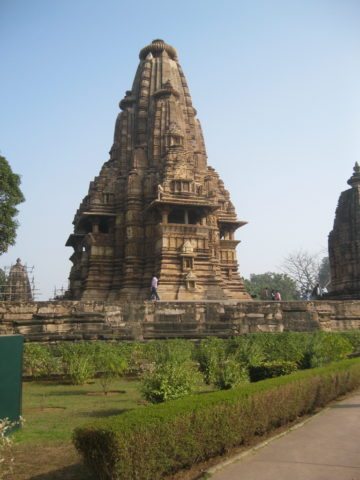 Eroticism wasn’t the main theme; rather it’s a celebration of human form. Even facial expressions come alive in those poetry in stone. 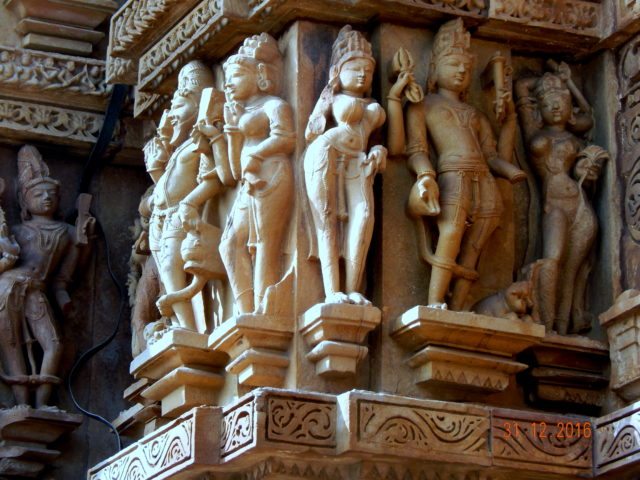 ASI has done a wonderful job in creating an ambience befitting the priceless possessions. Delighted this gem was preserved for us even after a millennium – a must visit place. 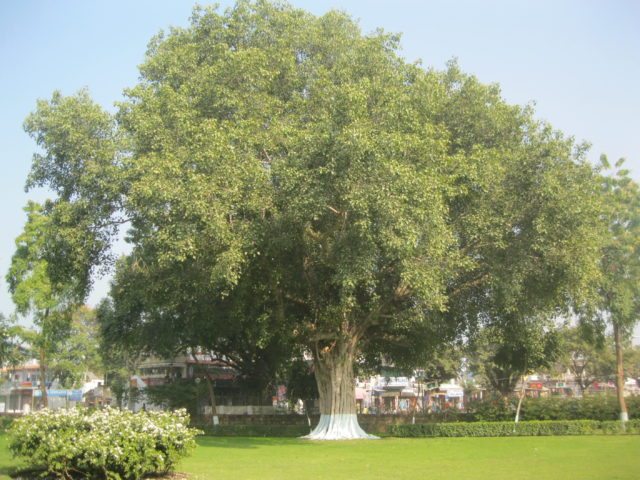 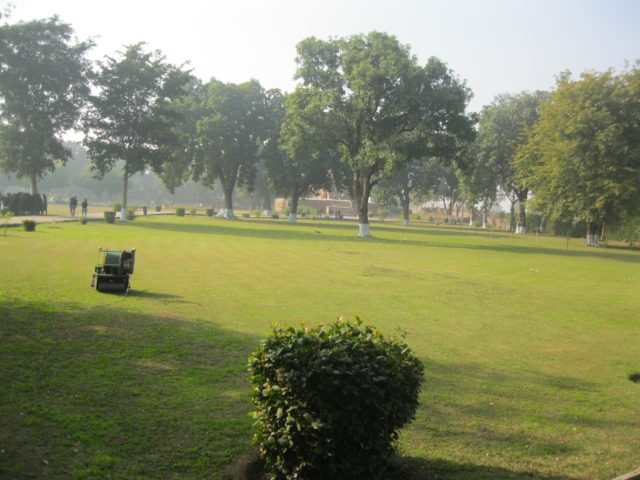 We went back to Charkhari that evening; set out for Delhi the next morning – the dawn of 2017 – via Hamirpur, Auraiya and Agra and were home in 10 hours.