While starting our journey from hotel at 9.30 am, we decided to go straight to McLeodgunj. On our way, we passed by the famous Phendhey Che-Kyong, Sorig Tibetan herbal clinic, situated near Shivnagar, PO-Gharo, Distt-Kangra. This clinic is famous for cancer treatment done in a simple way at petty cost. I have collected these phone numbers of the clinic : 09816088742 and 09418426247. I will be glad if anybody derives any positive result in case of specific requirement. This place came after 20 minutes of driving from our hotel (Hotel Gopal and Restaurant, Chambi, NH-20).

McLeod Ganj is situated at 1800-2100 metres elevation from MSL on the Dhauladhar range. It was named after the then Lt.Governer of Punjab Sir Donald Friell McLeod. Since the proportion of Tibetan population is substantial, the town (considering upper and lower Dharamshala) is also called Little Lhasa. During the British raj, once Lord Elgin thought to make it summer capital of British India because of its beauty. Destiny brought him in that area on tour in 1863, where he died. Tourists still love to visit McLeod Ganj, Forsyth Ganj and Dharamshala, not only because of the historical importance of the place, but also for the atmosphere, climatic conditions, local culture, natural beauty and above all to have peace of mind. 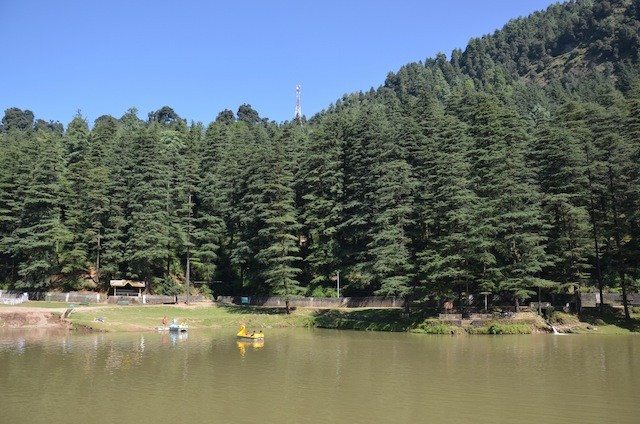 The Dal Lake at Mcleod Ganj

At around 10.30 am we reached Dal Lake at McLeod Ganj. It is a medium sized oval shaped lake lying on the lap of mountain positioned just by the side of main road. Opposite to the lake, on the other side of the road, there was Durbeswar Mahadev temple at a little bit of height. We reached the temple by climbing stairs to the top. It was a neat and clean cool temple without any kind of fanfare. No visitors were seen, even there was no pandit ji when we got into. There was a small open yard just in front of the temple, which was well shaded by tall trees. So we entered the temple, paid our reverence and came down to the road remaining un-noticed.

The Dal lake is surrounded by series of Deodar trees grown at different elevations, which present a magnificent view. There is paddle boating facility in the lake. People can hire peacock shaped paddle boat for floating around in the lake and pass some tranquil moments. An ideal place for the newly weds, or for the going to be. Tourists can also have a pleasant walk through the Deodar trees and listen to chirping of birds, without being disturbed by anybody. It’s really a nice place. 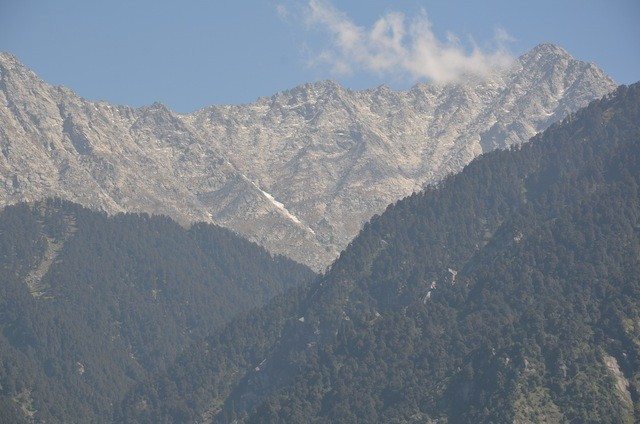 View of the Dhauladhar range

From there, we went to the view point, Naddi. Though it was only 10.50 am, but the day was sunny and bright, like yesterday. So we decided to go there, so that distant objects including the great Dhauladhar range can be seen easily and be photographed clearly in radiant sunlight. View of the mountain range was great, so was the picturesque village placed on the lap of distant hills. There was a person equipped with his telescope, who was allowing tourists to enjoy the panoramic view against Rs.10/- only. So it was a win-win situation for him and for the viewers. 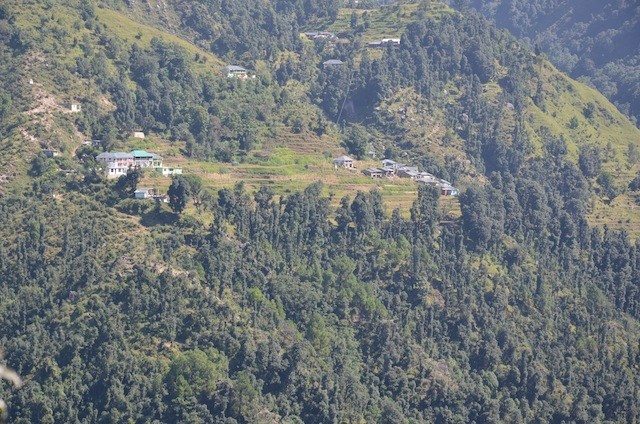 A cool village lying on the lap of a hill

We then moved to the church of St. John in the Wilderness between Forsyth Ganj and Mcleod Ganj. This neo-gothic stone shrine was made in 1852 following Anglian structure. It was named after John the Baptist. As the structure lies deep inside dense woods, during the olden times, they appropriately named it as St. John In The Wilderness. There is a memorial devoted to Lord Elgin, who was Viceroy of India during British raj. According to his wish, he was buried here, as also Donald Friell McLeod. Also Lord James Bruce, who was Viceroy and Governor General of India, was buried here. His widow Mary Louisa made a monument within the church compound. 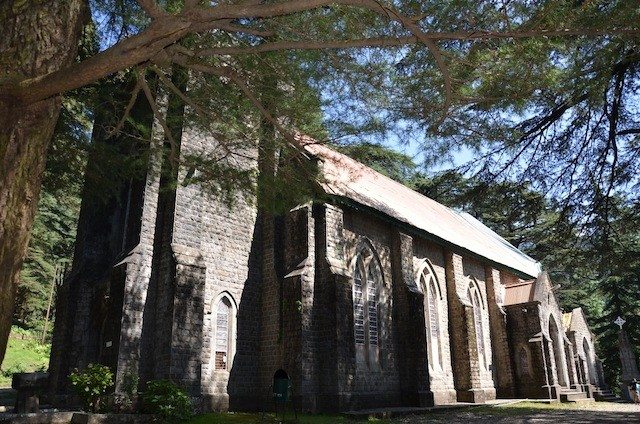 An ancient church – St.John in the wilderness 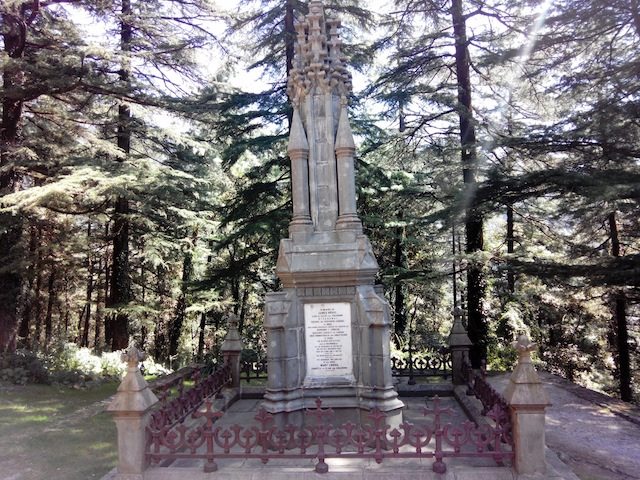 So we can understand that this church is of enormous historical significance, which tourists can’t afford to miss. In the year 1905, there was a great earthquake in Himachal, in which nearly 20,000 persons died. This church survived that one, but its bell tower destroyed. In 1915, a new bell was imported, which was made by M/s Mears and Stainbank of England. Visitors can see the old bell kept on open ground inside a cage just beside the church under Deodar trees. 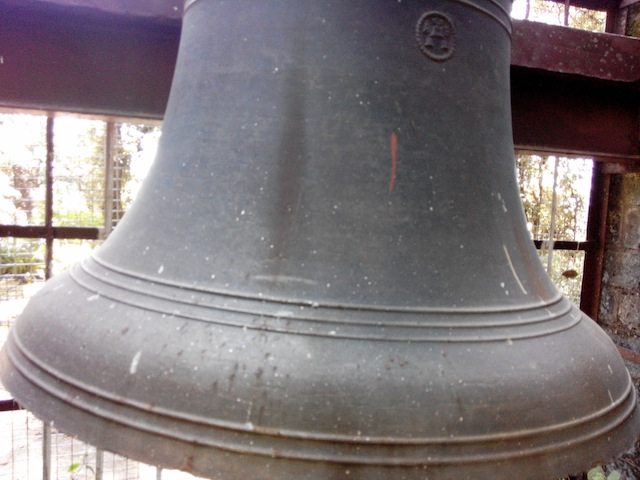 After walking down the pages of history, we moved towards Bhagsu nag. This is another enjoyable place with mythological significance. We parked our car where the town ended. From there the narrow path starts through thousands of local shops offering apparel, snacks, memento, souvenirs etc. After the shop area, the old Bhagsu nag temple stood to our left. The earthquake of 1905 damaged the old temple. So this temple was built thereafter, which is dedicated to Bhagsu Nag, the snake god and Lord Shiva. According to legend, 5000 years ago, Nag devta, the snake God was drawn into a battle with a local King Bhagsu, who dared steal water from the sacred Nag Dal Lake. King Bhagsu was vanquished and forgiven by the Snake God and the site consecrated as Bhagsu Nag. 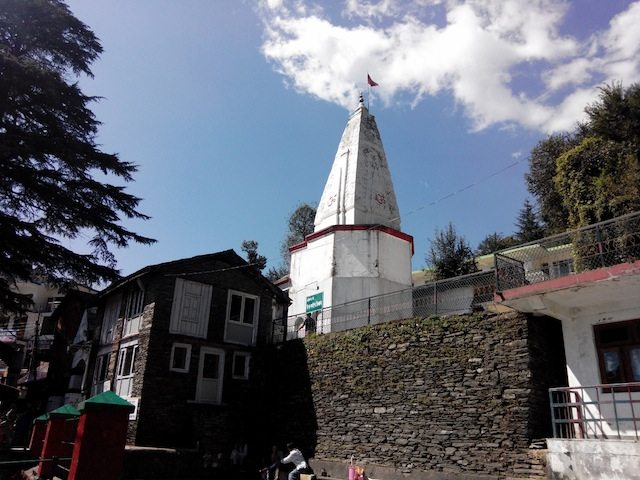 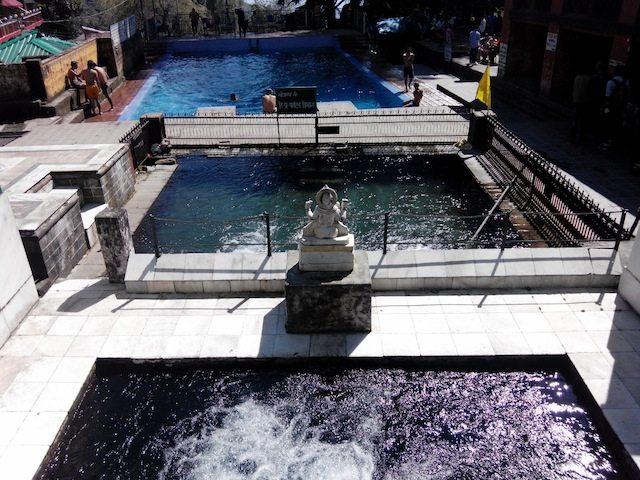 After crossing the temple and leaving the flow of stream and the swimming pool to the right, we reached at a small landing. From there, the famous Bhagsu falls, the mid-stream, the down-stream, means the complete span was visible in one single frame. The narrow hilly path starts from there. The way, including the intermittent stairs, is approximately 1 km. in length. Most of the way is cemented and provided with stairs wherever possible. The narrow, winding roads leading to the falls offer surprising sights of nearby hills and the downstream to the right. The cemented path gives way to natural hilly surface towards the end. After crossing the big boulders, we reached near the falls ending the 20 minutes walk. It’s a great place. Endless supply of water comes from the higher range of the Himalayas through local hills. The fall is roughly as high as a 3 storeyed building with moderate width. The seamless gushing sound of free falling water surely charms the visitors. The spot where the waterfall touches the base is very deep. One can not go there, as doing so is restricted for safety reasons. But people do flock around keeping a safe distance of 20 feet from the deeper area. One is bound to go back to his/her childhood once he/she walks through the free flowing water going to the downstream. Everybody usually restricts their children, but after sometime himself / herself becomes a child after getting into the water. We also walked around and passed peaceful moments by sitting upon a boulder placed nearby. Many foreigners were also there, who were also enjoying the place. With a small cafe located before the waterfall, one can enjoy hot beverages and local snacks or noodles. Enveloped in peace and tranquility, Bhagsu fall is certainly a delight and a must to visit. 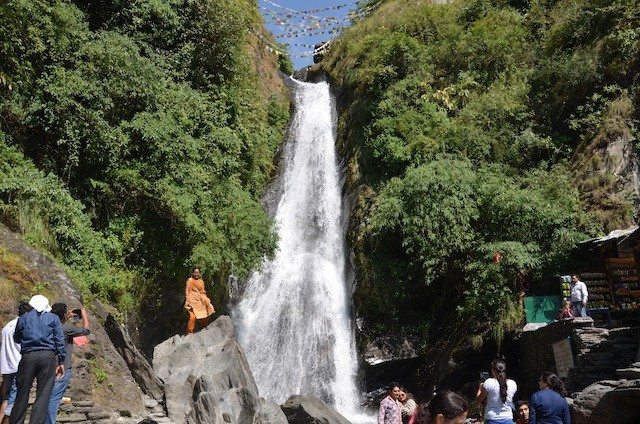 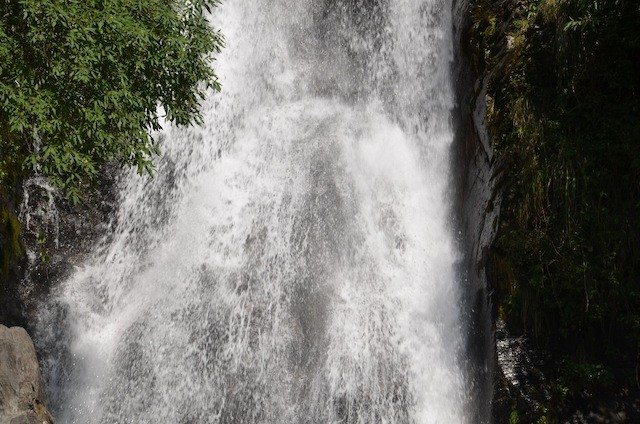 A close view of the Bhagsu Nag waterfall

Colourful rocks, free flowing water of the fall and please don’t miss my own shadow

From Bhagsu we went to the Tibetan museum situated in the town. Before going into any detail, I want to share that, we learnt that photography was prohibited inside the museum and Namgyal Monastery. So we left our mobile and cameras inside the car. But I saw many visitors were taking photos inside the monastery using mobile phone. I missed the opportunity to capture any photo because of this mis-information.

Just entering into the building area, the museum comes to the left. This museum illustrates history, culture and tradition of the Tibetan cult. Major historical events associated with Dalai Lama and the formations of Little Lhasa are illustrated in detail at the gallery. Number of pictures and texts exhibit Chinese occupation of Tibet and the migration of Tibetans. The multimedia museum is also equipped with videos and photos, which are displayed. If one does not visit the museum, he/she loses an important phase of history, not so well known to us.

Inside the Tsuglagkhang complex, Namgyal Monastery or the popularly known Dalai Lama temple was a few yards ahead. It was a very elaborate building. There were plenty of stair openings to get into and to get out of the building. But most of them remained closed for visitors, except for the specifically marked ones for use of tourists. It is the home of the Dalai Lama and also the largest Tibetan temple outside Tibet. Namgyal Monastery was originally founded in 16th century Tibet by the second Dalai Lama. Namgyal Monastery was originally founded in 16th century in Tibet by the second Dalai Lama. The monastery was established so that Namgyal monks could assist the Dalai Lamas in public religious affairs, perform ritual prayer ceremonies for the welfare of Tibet and function as a centre of learning and meditation on the profound Buddhist treatises. After the Chinese invasion of Tibet in 1959, when the 14th Dalai Lama was granted asylum in India, the monastery was re‐established here to preserve and continue the Tibetan culture and traditions. Even those who are not particularly inclined towards religion, will be fascinated by the serene ambience all around the campus and the imposing statues of Shakyamuni, Avalokiteśvara and Padmasambhava (Guru Rinpoche). 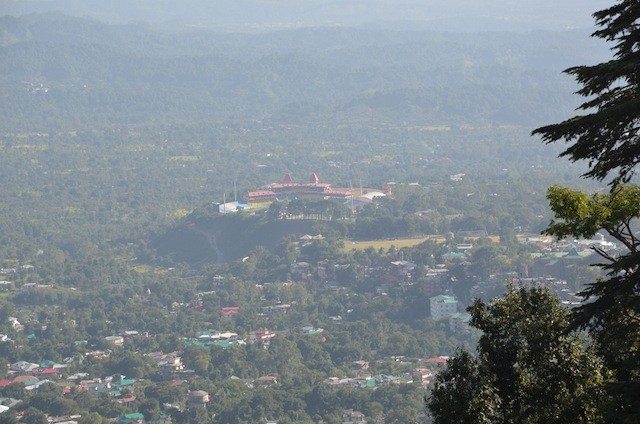 Skyline of Dharamshala with cricket stadium at the centre

After visiting McLeod Gunj, Forsythe Ganj and Dharamshala, while coming down, we saw the cricket stadium from high above, which looked like a miniature version. As an international cricket match was scheduled to be held on 2nd October, entire area adjacent to the stadium was restricted. So, we proceeded to Chamunda mata temple. Apart from this place of worship, we already chalked out a plan for the day to visit Palampur tea estate and other important temples like Baijnath and Brajeswari. Please read next part of my travelogue in which I would narrate my visit to those important shrines on 29th September 2015.

McLeodganj – The mystical hub of Himachal was last modified: February 9th, 2016 by SANTANU

Let me first tell all the readers that I got the motivation to write this after reading through many of the posts at ghummakar….