The name came from a nearby river Sungai Batu. The place is essentially a limestone hill having a series of caves. The hill, along with those caves, are supposed to be formed around 400 million years earlier.

Even if the place is a heaven for geologists and animalogists alike, it is probably more renowned as a Hindu shrine – dedicated to Lord Murugan. In fact, this cave is one of the most popular Hindu shrines outside India. Not very far from the Kuala Lumpur city – around 13 kilometers.

As per geologists, the hills and the caves were constructed around 400 million years ago. In recent times, in 1890, an Indian trader named K. Thamboosamy Pillai established this as a place of worship of Lord Murugan. He installed the murti of Lord Murugan and built the temple inside the cave.

Since 1892 the Thaipusam festival in the month late January or early February has been celebrated here. The stairs as can be seen today was constructed only in 1920 – total number of steps being around 272. 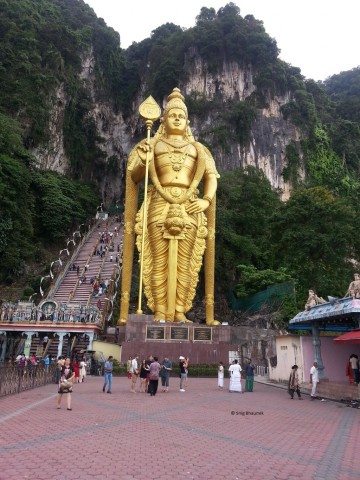 Statue of Lord Murugan and the Stairs up way

Because of my hectic schedule of the day I started off very early from the hotel. Took the MRT from Taman Jaya to KL Sentral. From there ascended on the KTM Komuter train to the Batu Caves.

Very cheap journey, one way ticket is just 2 Ringgits per person (on 2013), I don’t expect the price to be very high even now. The Komuter train is almost similar to the short distance local trains, however, unlike us, very clean and well organized. I boarded the train at around 7AM from KM Sentral, reached at the destination at around 7.45AM. One other reason for me to start that early (apart from shortage of time) was to avoid the bright sun and hot humid atmosphere during that period of the year. Turned out to be a good decision, since it was hot there even at 9 in the morning. I suggest to reach there as early as possible, you will have enough time to explore as well as can dodge the heat and humidity – especially if you are travelling in summers. Even though climbing those 272 stairs may not be a big deal, still the hot afternoon sun can challenge you to mount up. 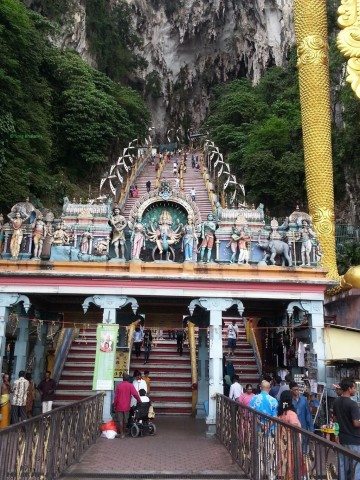 You will be welcomed by huge statue (140 feet) of Lord Murugan, the abode is populated with all sorts of basic and advanced amenities that suits all types of travelers.

While climbing up, beware of the monkeys running around you. Even though they are not of ambushing kind, some open food items may attract them towards you. So hide those potato chips packets, cold drinks bottles etc. Also, keep your kids in close watch – I witnessed a naughty boy being charged by a couple of monkeys, of course the child first poked them. 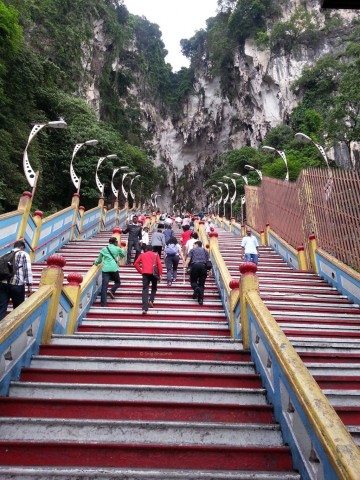 After climbing up, I was pleasantly surprised by a board that said Dark Caves – Guided Educational and Group Tours available. I promptly restrained myself from entering the main cave, and followed that direction.

The Dark Cave is a restricted area, not an open public place like the main temple cave. The Malaysian Nature Society, a prominent NGO that works on Nature and Environmental conservation, organizes educational and adventure tours inside the cave. Individual educational tour lasts for around 45 minutes, fortunately for me one batch was just starting up. I booked myself a ticket for the same – it costed me 35 Ringgits (worth every penny).

You will be provided with a helmet, protective jacket and a torch. Your guide will enlighten you with the history and geology about the cave. It was quite fascinating for me to know that there a few species can be found in this cave, and nowhere else in the world.

For example, the rarest spider in the world – the Trapdoor spider (Liphistius batuensis, the scientific name). Even there are species still live in these caves since some 100 million years!

Of course, you cannot see of them, because of these species are mostly tiny, and the cave is literally dark. Because of the fragile ecological atmosphere inside the cave, you are bound to follow some important rules.

The 45 minutes of tour inside the cave was intriguing. Some sun lights enter into the caves thru some open cracks – amazing to see the walls of the caves by that light. I didn’t had those powerful DLSRs having high ISO and wide aperture to catch the glimpse of it. Frequently our guide used to halt and described us the ecology of the cave in whispering voice.

It is a tour I would suggest everyone should take.

As soon as you enter into the main cave, you will be caught by the vastness of it – almost 100 meters of height. Electric lights are lit, the cave walls are illuminated, you can see all the limestone designs crafted by nature since millions of years. 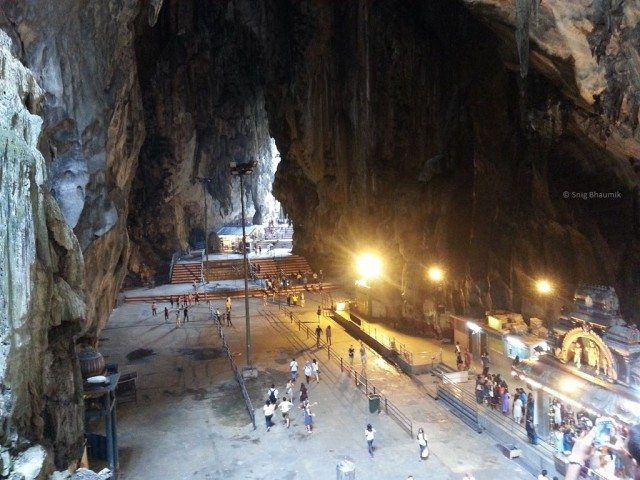 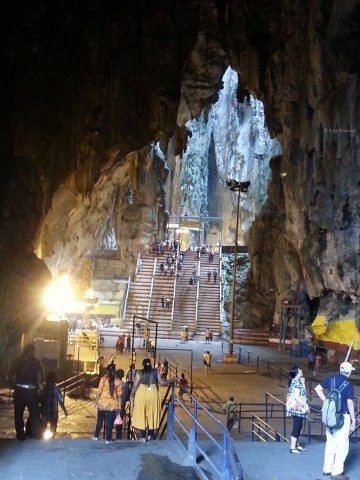 Number of small and medium temples are built here and there; the walls are populated with various Hindu deities. 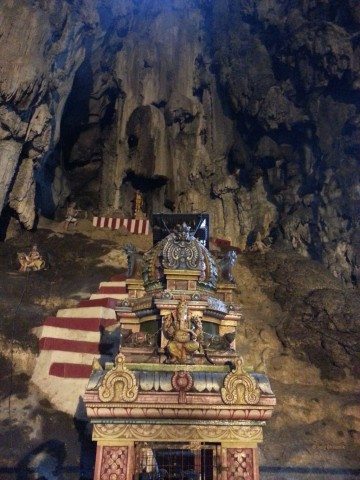 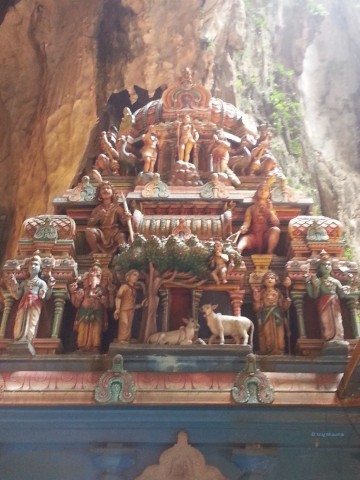 Guess the Hindu population visits the place mostly during the holy dates, as I found the lion’s share of the travellers are from Western countries, not from India or any other Asian countries. I crossed many small mandirs and statues to reach the main temple. 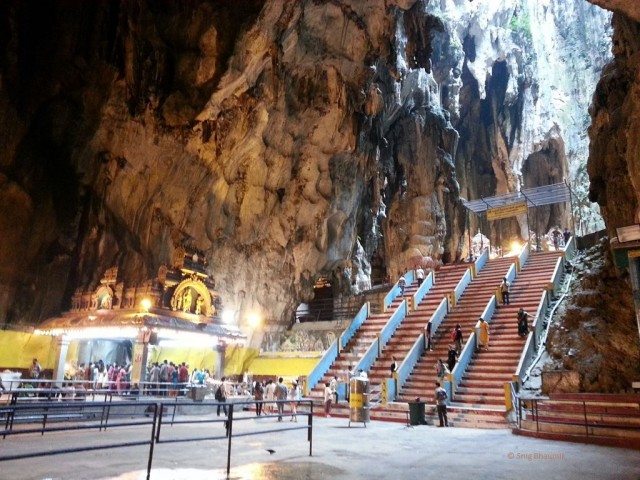 Stairs to the main Temple

The ambience of the temple inside the large cave is indeed a sight to see. The cave ceiling is not fully covered, thus allowing ample lights to enter and lit up the whole area. 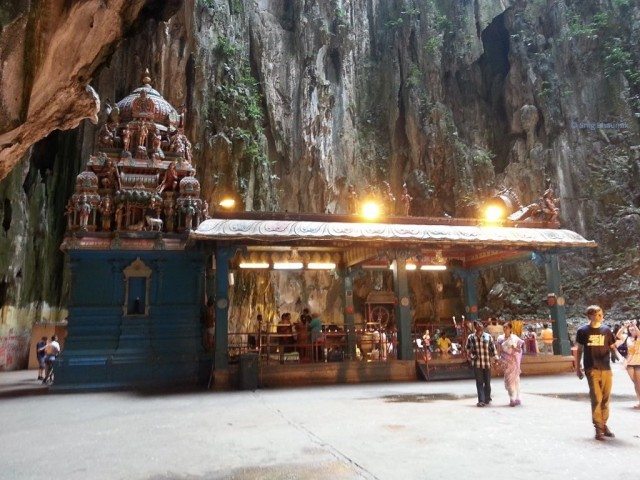 Witnessing the sculptures crafted on limestones around all the walls of the cave is an interesting experience to have. 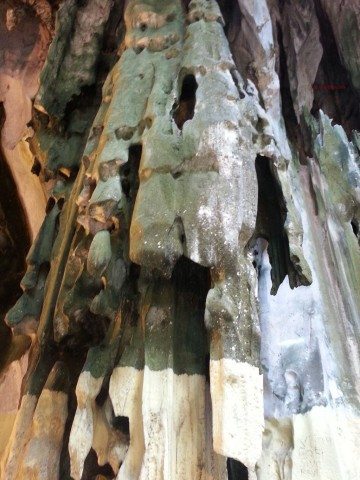 Just an effort to capture the ambience here.

I didn’t had much luxury to spend more time around the place. So hurried myself down at around 12. 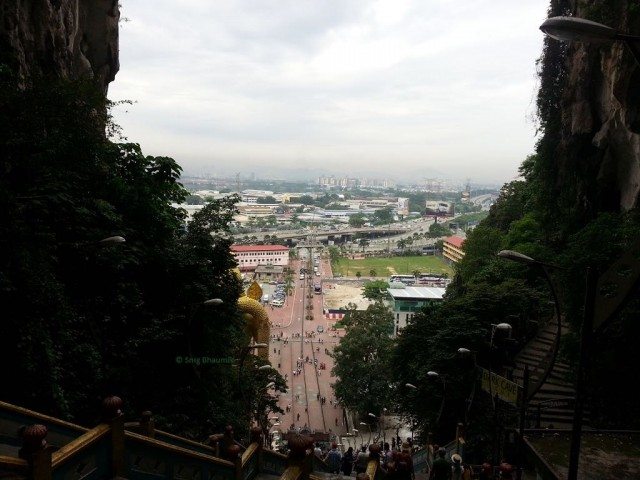 View from the cave

Had some light food in the brief market down and headed back to the station. The train station is just adjacent to the cave campus, a few minutes’ walk from the cave stairs.

My next destination today is the Twin Towers – but will go to the top.

Visit to the Batu Caves was last modified: March 23rd, 2022 by Snig Bhaumik