After a number of discussions and re-discussions, the decided route was via Una-Bhota and I must say the start was scary for the wife at least. I must have taken some wrong turn or so because rather than straight to Ropar, the ride suddenly went through mountains for a while (roughly 20 kms or less I guess) and you can understand the fear in wife as I was driving on hills in night for the first time. Even last Dehradun-Mussorie ride was my first hill ride throughout during day. I, on the other hand, had no issues with the route till it was wide enough and was paved.

The roads went up and up, then down and down, then up and up with almost no co-traveller or traffic to pass. It was complete lonely stretch feeling like we are walking into forest, leaving a sense of vulnerability. Anyway.. it lasted for a while and we were back to plains after that. It was still night and despite of expectations, no sunshine even by 4AM and then just small by 4.30 AM.

First stop was near some riverbank which had a typical greenish color. 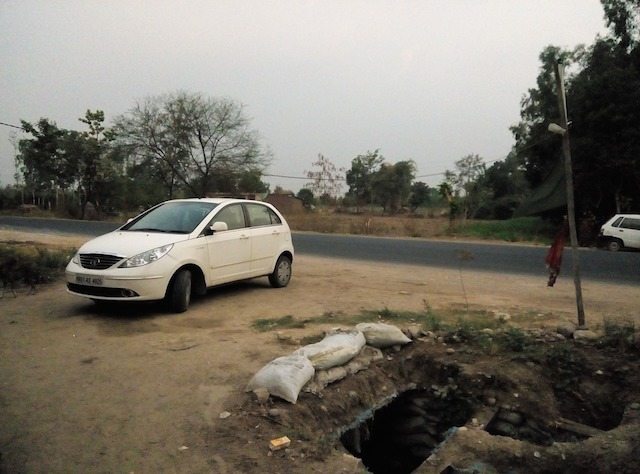 First photo ops of the car 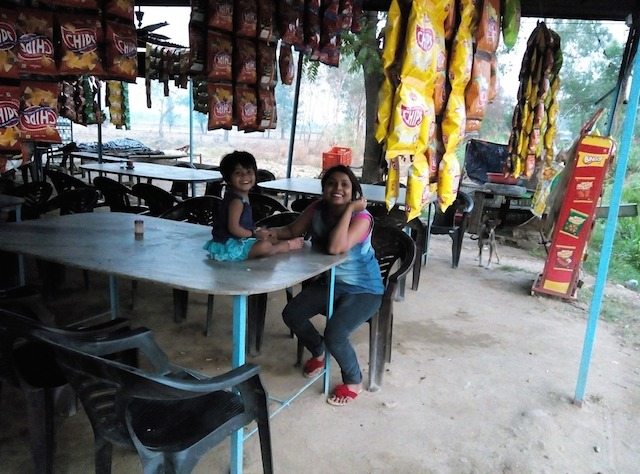 A short break for tea

As with beautiful Gurudwaras by side of the roads and finally stopped for tea by 6.30 or earlier before Nangal. In front of the Dhaba, there was this vehicle which seemed to have met a horrible fate. It was a reminder to me to keep speed in check even when I was willing to finish the journey faster. 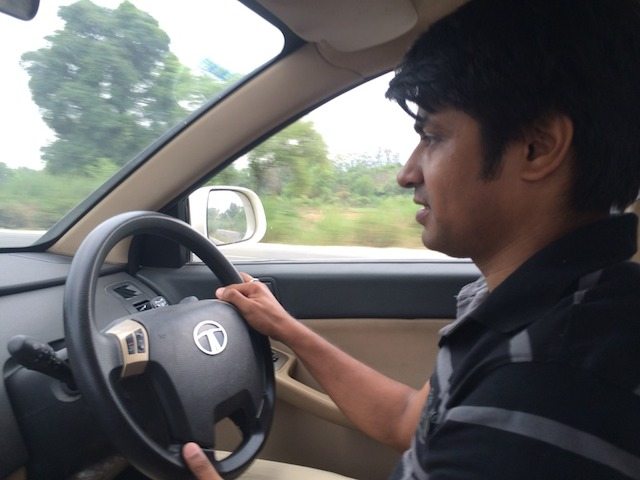 Passed through Nangal but as I seen through the maps and was expecting a sight of Nangal Dam, reality happened to be opposite of that or I might have missed something. Didn’t see any picture worth portion of dam while Sygic kept on driving me for my way. It was tough part about routes as Sygic kept on pushing me on Bilaspur route while I intentionally wanted to avoid it. One minor mistake then backtrack, but finally with help of Google maps and determination, I managed to keep myself on Una-Bhota route and then that paid off….. 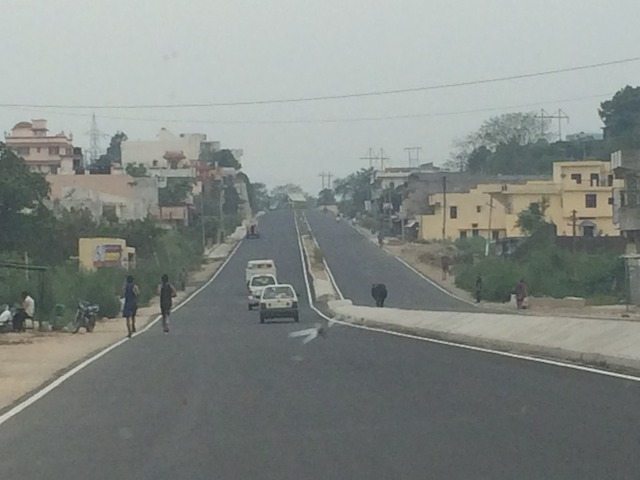 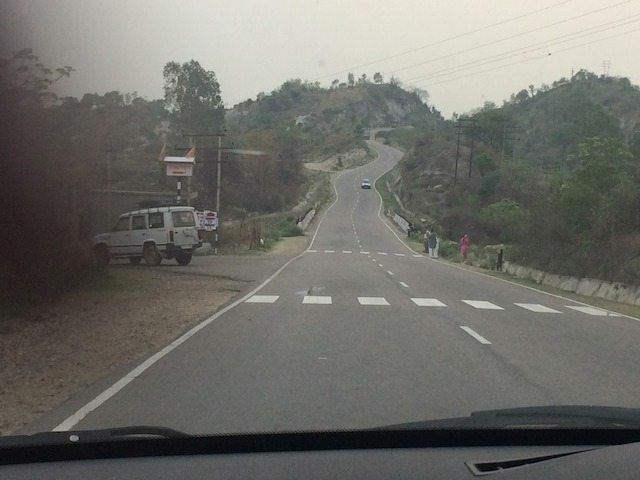 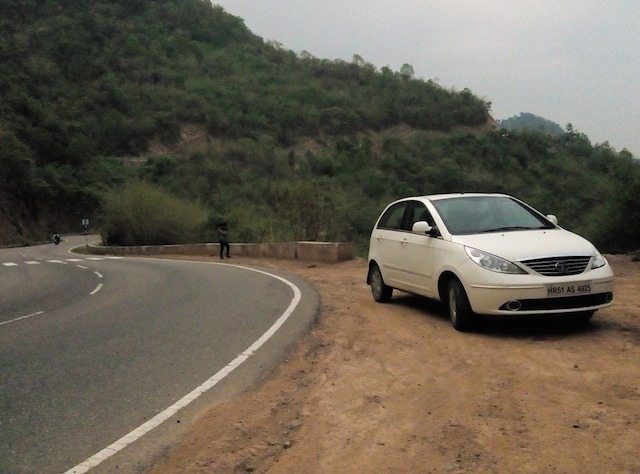 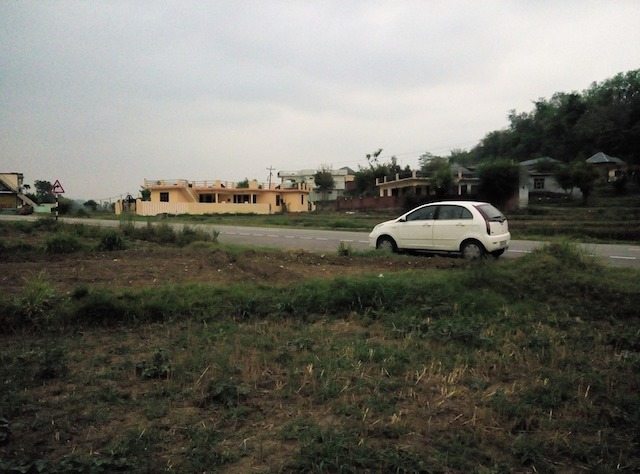 A stop near a farm

A 360 degree panorama view at somewhere on Una-Bhota route

Man!! What a sight the hill ride of Una-Bhota was. Literally never thought to see such roads on any Indian hill route. It was true Hollywood style, picture perfect route (only wish, wife would have been more interested in taking pictures than just watching & enjoying the scenic view). Perfect width, perfectly marked with paints and with rocks on a side and sometimes both the sides, it was always beautiful throughout the route. I really wished that it remains so till Manali. 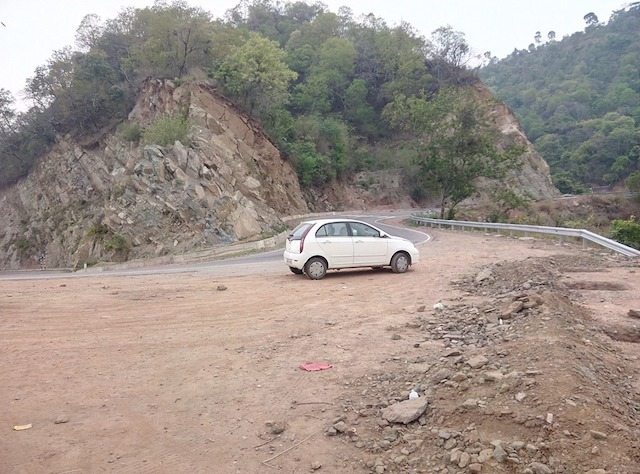 The car posing at a corner 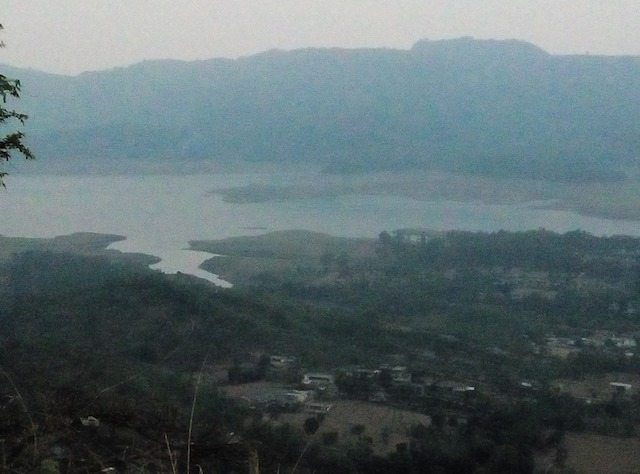 Some reservoir on the way

We also took a stop in between at some reservoir where we took Samosas and Tea while enjoying the view.

It was a long long hill drive for sure and in such perfect conditions of roads that if I had any longing for hill drive then it should have been satisfied completely by now (Must have been 200 kms in hills in this journey). After having a bump free ride for at least 400-450 kms till now, finally I was to face reality.

After Hamirpur or I would say precisely after Jahu, the roads were gone all of sudden. Literally no roads or narrow ones.. yeah.. supposed to be state highway. Anyway, I had to drive till I reach Ner Chowk then I come to reach such a stretch which was completely unpaved with very narrow width. At one side there were rocks and on other side thousands feet down. I kept on driving and wife was in no mindset to take pictures. I started driving slowly & steadily to pass that stretch hoping it would get better and then…

Despite of horns, the driver from other side kept on driving and both the vehicles came in front of each other. Trust me by no means even a biker could have gone past me at that road but how to tell this to that driver. I stopped my car & sat down idle. The driver in next car realized his mistake & started moving backward by inches and then I seen more horrible scene. A kind of small truck & a sedan were coming to this side & also an Alto was behind me. If they would have come then it  would have become an hour long nightmare but thank god they understood the situation & stayed back.

Situation wasn’t over yet. Despite of moving few fts in those dangerous terrains by the other car, it was less space for us both to pass through each other or it was narrow. Anyway, we had no choice. I took God’s name inside my mind and moved forward. Almost an inch leaving by side of rocks while the other car had to do the more dangerous part.. to inch towards the other side with thousands ft down. Gap between our cars wasn’t more than 2” & his tyres & the other side just 6”… Anyway.. it was done. Honestly, I should have give full credits to the other driver for the part. In no way, I would have done that nor I had space left to move back as it was narrow even before me. Anyway…

We took a sigh of relief & I drove ahead joking with wife that she should have taken pictures of the moment so I would have a memory of scene & others could know what I am talking about. On which she replied that she was shit scared while same time she had to take care of the kid & to tell me clearance with rock as well, so wasn’t interested in keeping any memory sort of.

The situation of roads continued like this for a good 33km at least and got better once we reached Ner Chowk. Narrow & winding roads killed the momentum & made the car to run in first two gears for a longer while till we finally reached Ner Chowk. 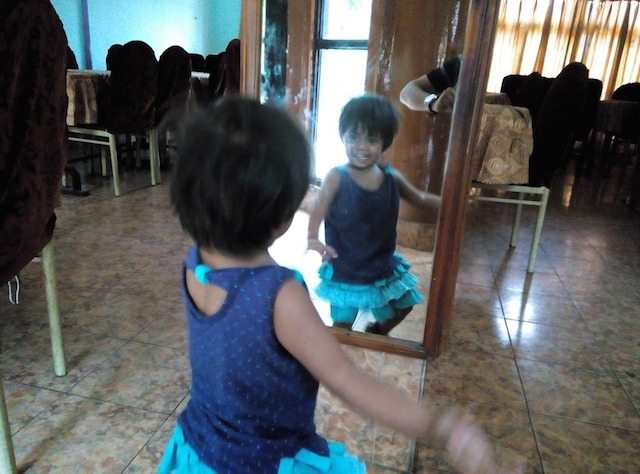 We took a stop at Mandi at around 12PM to have lunch. Roughly 7.5 hrs for 265 kms wouldn’t be called as some fast ride but considering the hilly roads throughout, horrible patch of 33km (Manageable still) and stops to take a look at views on kind of Hollywood style dream roads, I would say, I maintained good. Didn’t I?