With my mental preparations , gleefully we started “left” from our night stay at “Hotel Uttarakhand” after  breakfast. The road was quite with morning mist still there rolling on the twisty roads. The traffic was less until we reached Baijnath, at a distance around 16 kms.

A Clusters of Temples, which attracted some countable motor vehicles all over and the small narrow bridge of ” Gomati” was already having a long queue of cars and small buses. Traffic polices were controlling the flow there even in that time of early hours which was very uncommon seen through out our travel. We didn’t have a stop over there and  continued .

The road was quite straight then up to “Bageshwar.” So at places I was able to reach a spark on speedo to take advantage to overcome lost time for the expected slower roads ahead. Road side view was awesome. For all travelers, the cocktail of soft climate with bright morning, a smooth straight road, hills all over, river dancing by the side is always a welcome drive so we went on , stopped some places to capture spectacular views all over. I was feeling the beauty of Kumayon with my all senses which was just a gift of essence from mother nature.

“Bagheswar was a 20 kms drive from “Baijnath”, which took only less than 30 minutes. Our schedule was to take lunch at “Bagheswar” but as it was only 0930 hrs, so decided to take the halt ahead and crossed  “Saryu River” bridge to went for “Chaukory”.

There was a short route of 30 kms less to reach “Munsiyari” through  “Kapkot” which is not recommended  at all for its infamous bad roads ,  got pessimistic recommendation from locals also.So we took the “Coukry” one, It had a distance of 50 Kms and as soon as we left “Bagheswar” town, the road began to ascend. while enjoying the downtown of Bagheswar down below.

It was blissfully, smooth tar for an enjoying drive. The road was not very wide but comfortable for two vehicles side by side but not very effective for speed for many hairpin bends. There were broad spaces at both the side of road so that one can get a well clearance from the incoming vehicles. Hilly foundation for the road was quite reliable and seasoned.

There were numerous hairpin bends which was a cautious matter for “me” like plain Lander. I noticed the bad practice of not to use horns at the bends. I did my best of safe driving while was honking in those situations. It took nearly 2 hours to reach “Chaukory”. The mid day Sun was up with all blaze but the cool climate didn’t let us feel uncomfortable.

I was trying to find out a decent eatery on the way but none felt up to the mark and we went on, took “Bagheswar- Didihat road for 26 kms to reach “Thal”. It was nearly 1300 hrs and we decided to halt there for lunch. 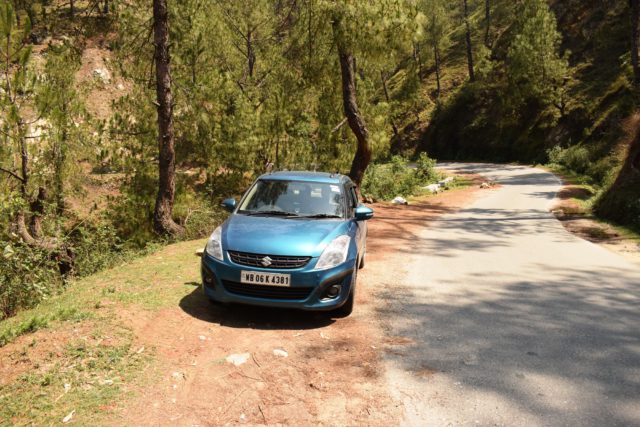 On the way to Munsiyari 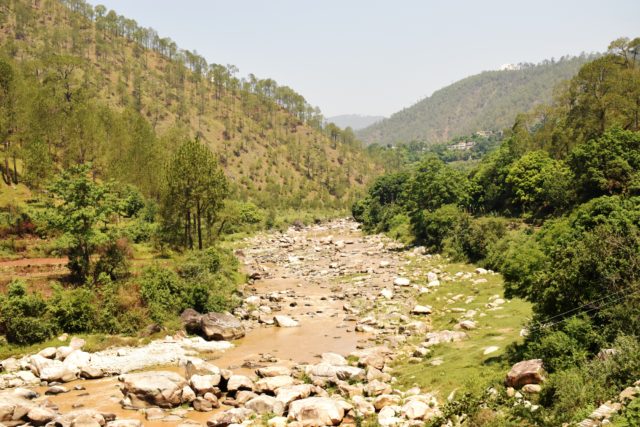 The distant peaks wore black clouds all over them, with lots of green, while”Thal” gave us a last wave of concrete dry roads and evident mockery of  broken patches ahead. The area ahead was an all time squall related area which does not promise to build a strong road which requires a full dryness for a period.

“River Ramganga” started  accompany us from “Thal” market place. In the beginning the road started with few occasional patches but was running straight with a spectacular river bed ran with us. I lost track by indulging with narrow roads further but all along, up to almost near “Birthi”, I felt his(river) presence with occasional stare to look down at the deep gorge by the side of the gig-zag narrow road.

After “Thal” torrents of rain came. but lasted for little time and the sky became cloudy, while we crossed “Nachani” the road started a steady ascend on the spines of hill. Other than hill drivers when one drives in a hilly road and get the trees or some king of barricade along the gorge side, could get a psychological protective effect rather to get a barren or smooth grassy gorge by the side and we were not apart from that feel of protection less.

So we marched through the ascend and descent of the typically narrowed road, sometimes with heavy patches of boulders. For quite a few kms after “Nachani” the road was fully barren and was visible for far distance, cut through the hills like an ancient reptile. From long distance one has to prepare and find a place to pass the incoming vehicles to give side.

Particularly for some heavy trucks and buses. In some places the road were really narrow and patchy for me to got uncomfortable.”Nachani” was a mere 14 kms from “Thal” and after “Nachani , until we reached “Birthi waterfalls” of 37 kms the road had an excellent view of  altitude wilderness. The keen concentration went on as the hairpins were quite sharp which became stabilized in a little regular breathe as we passed “Birthi”, with the glimpse falls and of tourists gathered on the motor bridge to photograph. We passed on as it was scheduled for the return time, and to fulfill the target of reaching early to our destination.

It was 1430 hrs and the distance was around 30 kms to the destination from “Birthi” and I was not doing a good speed for the road condition with hardly an average of  25 kms/hour. There were many rock fall disastrous zone with plenty  scattered boulders all along, covered with moss in drowsy atmosphere, created some of the natures amazing sight.

The colored boulder, herd of altitude domestic cattle like coming down with bells around their neck in the fast signature of steady dropping light, forming a early evening backdrop to went home early. After the starting trail point of “Khuliya bugiyal and Khuliya top’ it was 6 kms to reach the hotel and the famous “Pachchouli began to hide and seek with us from the open escarpments of tall pines forests. At around 1600 hrs we reached our destination, “Hotel Milam Inn”.

The hotel was location wise just splendid, with a comparable view of “Panchchouli” peaks even from inside the warmth of rooms. It was located well above from the town area of “munsiyari” thus far from crowd. One can relax on the lawn in front of the spectacular view of white iced peaks and can even feel the touch of their gracious presence.

We spend the evening by clicking excitedly the famous “Panchchouli” with ice caps started to be engulfed by the evening clouds. The distant downtown and on their top was Nandadevi temple, like a very small cap which leads by a serpentine way. I tried to take a deep breath as was trying to place the natures treasure in my heart, to love, to remember forever.

22nd May night was scheduled to stay at Munsiyari, so we had a full day in our hand. There are many activity related attractions in Munsiyari. “Khuliya Alpine meadow and the hill top” is a great place to trek. Munsiyari also falls on the ancient salt route from Tibet and is at the entrance of the Johar Valley, which extends along the path of the Goriganga River to its source at the Milam Glacier.

It is inhabited mainly by the Shauka people. Munsiyari at an elevation of 2298 meters and is snuggled by the folds of snow clad mountains is a fast growing destination for activity lovers. Practically placed atop the position of Kausani , attraction wise. We got the best ice clad views from there.

It rained a bit on 21 st May evening at Munsiyari and after the breakfast in a chilly morning of 22nd May we got out and availed our car to visit “Nandadevi temple”. The 5 kms distance comprises the downtown of “Munsiyari” and a very attractive road covered with greenery. The sacred shrine holds immense importance amongst the local people of Munsiyari. Outer wall of the temple painted with the image of Lord Ganesha and inside Devi Parbati or “Nanda” worshiped.

The place where the temple area situates covered by a moist climate with alpine foliage of green overgrown vegetation. A perfect place to spend leisurely. Parked the car and availed the small distances to reached the open flat plain at the side of gorge. A small gate with guard was there at the entrance and after that an almost perfect picturesque flat land emerged with cemented sitting arrangement with weather protection all over by the side of sliding of the gorge and at the center was a small temple of “Mata Nanda Devi”.

The temple was very simple and one can arrange “puja” with whatever one likes. The heavenly place was just enough to spellbound any kind of person and one can spend all day by taking a seat on one of the shed. By looking down the far away mountain slopes had spectacular beauty of “Dhap Chas”, the tape like tarred roads was very much visible in green landscape.

After the range there are the icy caps of “Panchchouli” on the slight left of the almost 300 degrees view. Some ground level entertainments for small children were there. When we entered the place it was 0900 hrs, after that travelers started pouring, we took more than the stipulated time over there, drenched by nature’s beauty for some time by the side of pine jungle with a back ground of “Panchchouli”.

Around 1030 we started to return, filled the tank again for the next day and back to the hotel. The full day was there. We spend some time inside the hotel enclave with small jungle trek routes, took some photos before entering our room. Rain came in the afternoon which made the evening chilled and with the warm clothing we got busy for the evening photo shoot of “Panchchouli” right in front of us.

This time by the cooling effect the white icy mountains were more nearer than before with more icy peaks. We passed the gloomy evening quietly to get ready for the next day’s shot distance of 93 kms to “Choukry” 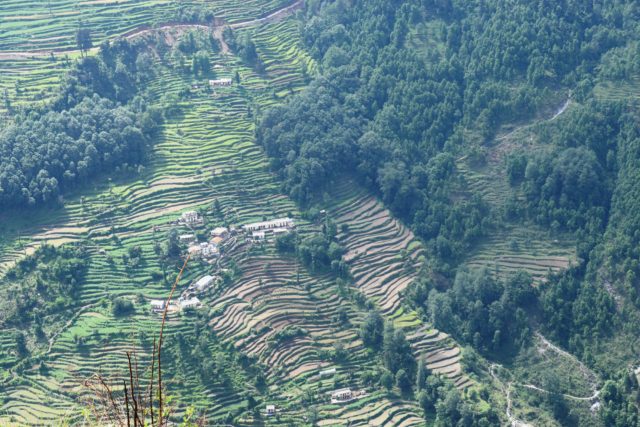